A closely watched coronavirus model is now forecasting nearly 170,000 coronavirus deaths in the United States by October 1. The projections paint a grim picture of what could come when summer turns to fall, with a steep rise in daily deaths forecast in September.

The model, from the Institute for Health Metrics and Evaluation at the University of Washington, previously only offered projections until August. It was cited often by the White House earlier in the pandemic, and it’s one of many models currently featured on the US Centers for Disease Control and Prevention website.

Daily deaths are expected to decrease through June and July then remain relatively stable through August. But the model forecasts a sharp rise in deaths come September.

In the model, projected daily deaths double from 410 on September 1 to 1,018 on October 1. Notably, though, the model’s uncertainty increases as time goes on. At the beginning of October, for example, the model offers a range of 96 to 4,382 possible daily deaths.

“If the US is unable to check the growth in September, we could be facing worsening trends in October, November, and the following months if the pandemic, as we expect, follows pneumonia seasonality,” IHME Director Dr. Christopher Murray said in a statement.

In a press release, IHME said its model is based on data through June 6. “Large gatherings in some states due to lifting of social distancing restrictions, gatherings on national holidays, and public protests are reflected in the general trend toward increased mobility,” the institute said.

The model looks at cell phone data, and increased mobility means people are moving around more. That could lead to more contact and opportunities for coronavirus transmission, but how exactly mobility corresponds with infections remains unclear. Behavioral changes like physical distancing and mask wearing could decrease the risk.

IHME says it includes other factors in its model as well, including data on testing, pneumonia trends, mask use, population density, air pollution, altitude, smoking and “self-reported contacts.”

According to the institute’s analysis, mask use results in a 50% reduction in Covid-19 transmission. But IHME’s data on masks is also self-reported, and it may not be representative of the population at large.

The IHME model has been closely watched, but it’s been criticized before for its assumptions and performance. It used to project that US coronavirus deaths would stop this summer, for example, which some experts said was unrealistic. IHME has since made a number of revisions to its methodology.

Still, the model is just one of many – and it’s not the only forecast offering longer-term projections. Another model, from independent data scientist Youyang Gu, projects that 201,550 people will die from Covid-19 in the US by October 1, with a range of about 147,000 to 284,000 deaths.

That model, which is also highlighted on the CDC’s website, projects an increase in daily deaths in July before a decrease in August and September.

Last Thursday, an ensemble forecast from the CDC projected more than 127,000 coronavirus deaths in the United States by June 27. The short term forecast relied on 20 individual forecasts from outside institutions and researchers. The CDC regularly releases new projections, so another ensemble forecast could be released later today.

Chinese shoppers are finally starting to snap up high-end handbags, shoes and jewelry again, giving the luxury goods industry hope that a recovery from the coronavirus pandemic is on the way.

But leading brands still face a tough road ahead, and will likely have to rethink the way they do business to withstand a damaging, worldwide hit to sales this year, as well as a shift in shopping habits in many recession-scarred economies.

Several luxury goods companies reported an uptick in China this spring as people emerged from weeks of lockdowns, spurring what some analysts have called a trend of "revenge spending" — the release of pent-up demand once people aren't forced to stay home.

Tiffany this week pointed to China as a bright spot for its jewelry business, saying that retail sales surged around 30% in April and 90% in May compared to the same months last year.

This was despite a drop of about 40% in Tiffany's global net sales in May. "Our business performance in mainland China, which was the first market impacted by the virus, is indicative that a robust recovery is underway," CEO Alessandro Bogliolo said during the company's earnings presentation on Tuesday.

Others have echoed similar thoughts. Burberry said last month that sales of its clothing, bags and accessories in China were "already ahead of the prior year, and continuing to show an improving trend."

The US surpassed 2 million confirmed coronavirus cases Wednesday night as new hotspots emerge and hospitalizations go up in some states.

More than 112,000 people have died from Covid-19 nationwide, according to Johns Hopkins University.

The spike in numbers highlights how complicated it is to stop the spread of the virus despite early hotspots such as New York and New Jersey seeing improved numbers.

Since Memorial Day, the number of coronavirus hospitalizations has gone up in at least a dozen states, according to data CNN aggregated from the Covid Tracking Project between May 25 to June 9. They are Alaska, Arkansas, Arizona, California, Kentucky, Mississippi, Montana, North Carolina, Oregon, South Carolina, Texas and Utah. An additional 22 states are trending downward while nine others are holding steady.

"I think right now, most Americans are not ready to lock back down, and I completely understand that. Here's the bottom line, though, which is that -- I understand people are willing to live alongside this virus. It means that between 800 and 1,000 Americans are going to die every single day. We're going to get another 100,000 deaths by September ... we really do have to try to figure out how to bring the caseloads down from these scary levels, in some states," Jha told CNN's Kate Bolduan on Wednesday.

The Centers for Disease Control and Prevention predicts between 118,000 and 143,000 coronavirus deaths in the US by June 27.

Two Missouri hairstylists who worked while they had coronavirus did not infect the 140 clients they served despite having symptoms at the time, local health officials said.

Both stylists worked at the same Great Clips location in Springfield for more than a week in mid-May.

The clients and the stylists all wore face coverings, and the salon had set up other measures such as social distancing of chairs and staggered appointments, the Springfield-Greene County Health Department said this week.

Of the 140 clients and seven co-workers potentially exposed, 46 took tests that came back negative. All the others were quarantined for the duration of the coronavirus incubation period. The 14-day incubation period has now passed with no new infections linked to the salon, county health officials said.

During the quarantine, county health officials called those who did not take the test twice a day to ask whether they had symptoms related to Covid-19, said Kathryn Wall, a spokeswoman for the Springfield-Green County Health Department.

Latin America and the Caribbean have now recorded more than 70,000 deaths due to Covid-19.

Several countries in the region are struggling to contain the outbreak -- most notably Brazil, which has identified more than 772,000 cases, according to Johns Hopkins University (second only to the US), Peru and Mexico, which just reported a record daily surge in new cases.

Mexican paramedics are responding to 911 calls at an alarming rate, as the coronavirus pandemic continues to ravage the capital of Mexico City. Many have died, and others say they feel scared and unsupported by the government as they continue to respond to the state of emergency

President Donald Trump is getting what he wants: The country is opening up come what may, despite alarming indications that the coronavirus pandemic is intensifying its assault.

Trump says the virus is now reduced to just the "embers" and "ashes" of a spent pandemic as patience for nationwide lockdowns fades and states aggressively open up.

The facts say the opposite, however. Another 1,299 Americans died on Tuesday meaning that more than 112,000 people in the US have now died from the disease.

Trump is not marking these deaths, just as he was reluctant to immediately honor the first 100,000 Americans who passed away before that terrible milestone was reached -- barely two weeks ago. And this is well before the feared fall resurgence of Covid-19, in the absence of reliable treatments and with a vaccine still months away.

The President has been cajoling for reopenings for weeks, banking on the ebbing patience of a gregarious and industrious people who don't take well to being told to stay home. He's been ostentatiously moving around the country without a mask -- even if such behavior by the head of the government sets a poor example and shuns precautions that could keep Americans alive.

Trump is not just defying the virus -- he's poking a stick at officials' warnings to avoid large gatherings, planning a rally in Oklahoma next week and others in four states where infections are heading up after that. Vice President Mike Pence -- who heads the White House coronavirus task force -- on Wednesday tweeted a photo of his visit to crammed-together campaign workers, none of whom were wearing masks or social distancing. He later deleted the tweet. 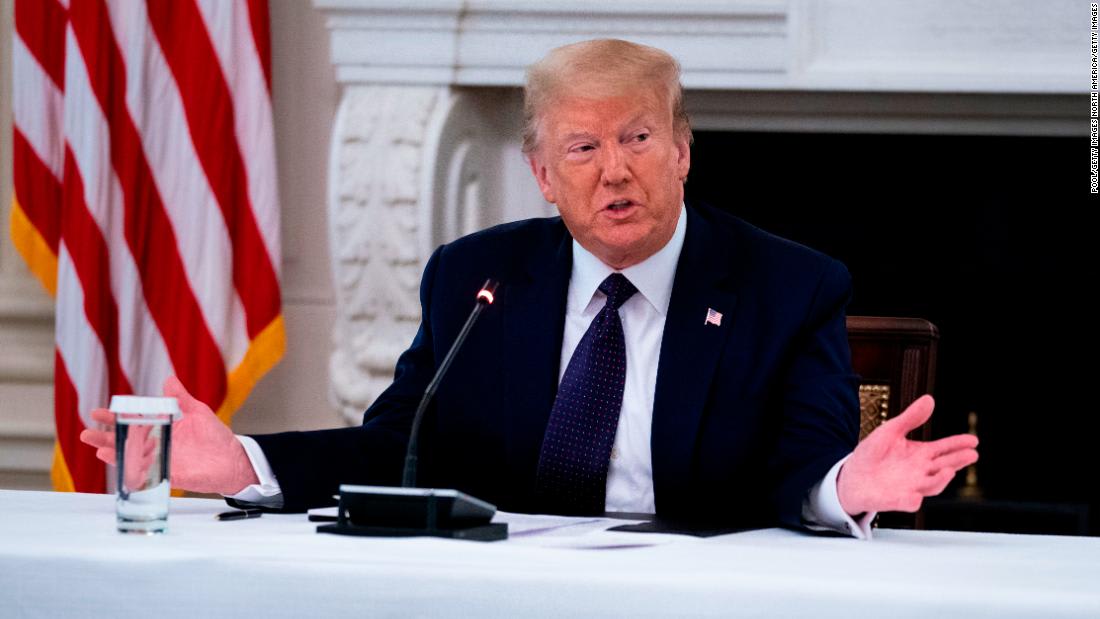 Los Angeles County is allowing some businesses, including gyms and museums, to reopen, but authorities say they are still seeing about 1,300 new coronavirus cases a day.

There are 67,064 confirmed coronavirus cases and 2,768 deaths in Los Angeles County.

At a press conference Wednesday, Los Angeles Mayor Eric Garcetti said that businesses reopening in the county made him "nervous.”

“We are still in the biggest medical pandemic of our lives,” he reminded residents. He urged people who participated in protests to quarantine for 14 days or get a free test from the 24 testing sites across the city and county. The sites have the capacity to test 20,000 people a day, Garcetti said.

Test kits are also being offered at 49 CVS Pharmacy locations in the city, Garcetti said.

The annual Coachella and Stagecoach festivals -- two of the largest music events held in Southern California -- have been canceled over concerns about coronavirus spread, local health officials announced Wednesday.

"I am concerned as indications grow that COVID-19 could worsen in the fall," Riverside County Public Health Officer Dr. Cameron Kaiser said in a statement announcing the cancellation of the festivals. "Given the projected circumstances and potential, I would not be comfortable moving forward."

Health officials said they have been in contact with Goldenvoice, the festivals' promoter about the issue.

The Coachella Valley Music and Arts Festival and Stagecoach Country Music Festival were originally scheduled to be held in April but were postponed until October under the direction of Riverside County health officials.

The festivals host hundreds of thousands of people each and were expected to feature big name performers.

Thomas Rhett, Carrie Underwood and Eric Church had been set to headline Stagecoach.

There are now at least 2,000,464 cases of coronavirus in the United States, according to a tally by Johns Hopkins University. At least 112,924 people have died in the country after contracting the virus.

The number of confirmed US coronavirus cases topped one million on April 28, according to the university's database.