Health officials in Beijing are working to trace around 200,000 people who visited a wholesale seafood market which is at the centre of a major coronavirus outbreak in the Chinese capital.

The city has reported more than 79 new coronavirus cases since last Thursday, most of which are linked to the Xinfadi food market.

Authorities are trying to trace all those who have visited the site since May 30. The market is a key source of food supplies in the city, and has been shut down in the aftermath of the outbreak.

At least 11 neighborhoods surrounding the area have also been sealed off.

"We have organized door-knocking activities, that means we will visit people [who have visited the market] at their doorstep, call them or contact them on WeChat and other apps," Xu Ying, a Beijing city government official, said on Monday.
"Now ... we are organizing the nucleic acid tests and at-home quarantine for them."

Xinfadi market makes up about 80% of Beijing’s entire farm produce supply. Some 18,000 tons of vegetables and 20,000 tons of fruit are at the market every day, according to Chinese state-run media organization CGTN.

Wang Hongcun, a Beijing city government official, said authorities were working to guarantee food supplies for the city in the wake of the market's closure.

China said on Monday that it was in close communications with the World Health Organization (WHO) regarding the latest outbreak.

"China and the World Health Organization have been in close communication on the latest development of Covid-19," said Zhao Lijian, a spokesperson for China's Ministry of Foreign Affairs on Monday.

Zhao said he did not have any information on whether Chinese health officials have shared the gene sequencing from the latest cluster of cases in Beijing with the WHO.

The data official behind Florida's Covid-19 dashboard says she has launched her own dashboard after being removed from the state's project.

Rebekah Jones was removed from the state's scrutinized dashboard project after she questioned other officials' commitment to accessibility and transparency, according to Florida Today.

Last month, Florida Gov. Ron DeSantis contested Jones' claims. The Florida Department of Health (DOH) said she had "exhibited a repeated course of insubordination" during her tenure there.

Jones's website floridacovidaction.com "is paid for entirely by donations," the fundraising portion of the site says. "Florida deserves a community based dashboard that doesn't hide or fudge numbers," the page says.

However, Jones parallels her data alongside DOH's coronavirus numbers, which are much lower, according to the website. 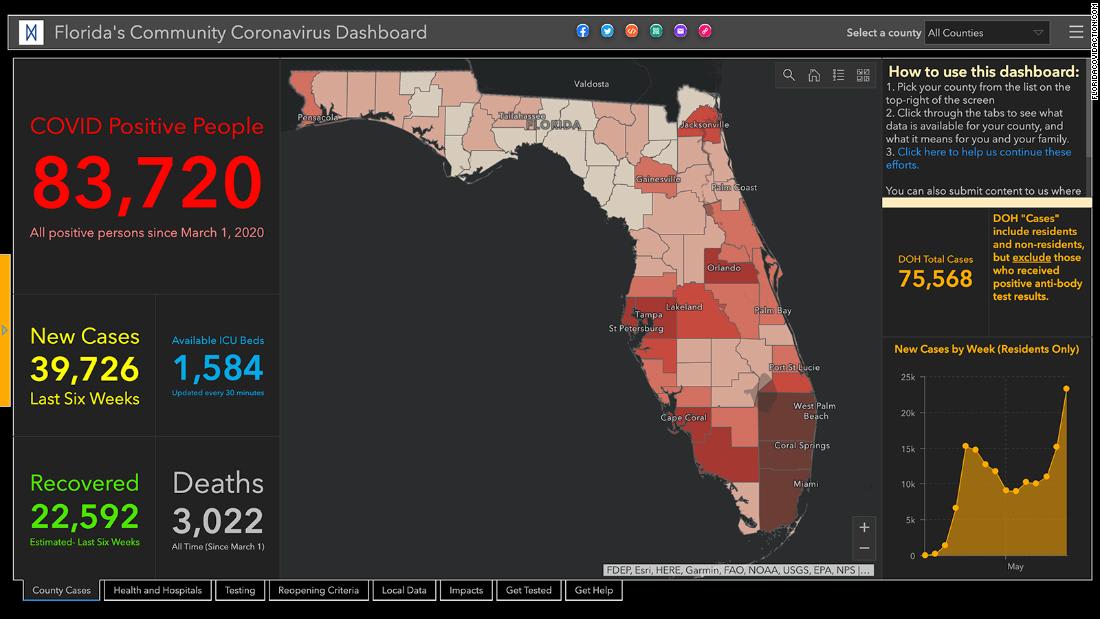 BP is writing down the value of its assets by as much as $17.5 billion as a shift away from fossil fuels is accelerated by the coronavirus pandemic.

The UK oil company said in a statement Monday that the health crisis could have an "enduring impact on the global economy," resulting in less demand for energy over a "sustained period."

As a result of the changes, BP said it would take a writedown of up to $17.5 billion in the second quarter -- roughly 6% of its total assets. The company may also stop developing some oil and gas fields as it invests in cleaner energy.

BP's management ... has a growing expectation that the aftermath of the pandemic will accelerate the pace of transition to a lower carbon economy and energy system, as countries seek to 'build back better' so that their economies will be more resilient in the future," it said in its statement.

A return to normalcy following the Covid-19 pandemic could come within a year, but people need to tamp down their expectations regarding typical summer travel and activities, Dr. Anthony Fauci told British newspaper The Telegraph in a story published Sunday.

Fauci is the director of the US National Institute of Allergy and Infectious Diseases, and a member of the White House Coronavirus Task Force.

The latest timing estimate came after a week that saw the case count in the US pass 2 million. Cases have increased in 18 states over the past week, with six states reporting more than a 50% jump. This has led some government and health officials to hit pause on reopening efforts.

More than 115,000 people have died in the United States as of early Monday morning, according to data from Johns Hopkins University.

"It's going to be really wait and see," Fauci said. "My feeling, looking at what's going on with the infection rate, I think it's more likely measured in months rather than weeks," he said referring to the timeline for rolling back coronavirus restrictions.

Shoppers in England lined up outside stores across the country on Monday, as many non-essential retail outlets opened for the first time since March.

From Monday, retailers are allowed to open if they comply with the government's coronavirus-secure guidelines, which require customers to shop while keeping 2m apart. Changing rooms in clothes stores remain closed.

This week, as shops start reopening in England, remember to follow social distancing rules to protect yourself and others," UK Prime Minister Boris Johnson said on Twitter.

CNN's Anna Stewart said many of those she had spoken to outside the Apple Store on London's Regent Street were seeking repairs or returns, rather than shopping for new products.

Businesses are bracing for dramatically lower footfall than before the Covid-19 pandemic began.

Bars, restaurants and pubs remain closed across the UK.

The UK has recorded more than 297,000 cases of coronavirus, according to Johns Hopkins University, making it the worst affected country in Europe.

England is the latest in a long list of countries to make mask wearing mandatory to slow down the spread of Covid-19, with face coverings compulsory on public transport starting Monday.

Many more of us are opting to wear a mask while shopping, when meeting friends and to attend medical appointments — even if it's not required.

But how does wearing a mask shape how we interact or communicate with others?

A smile is an easy way to defuse social tensions, but is this still possible when a mask is covering the bottom half of our face? And will the emotions of the people we encounter be harder to decode?

CNN spoke to communications expert Ursula Hess, a psychologist and professor at Humboldt University of Berlin, who says it's wrong to assume masks will make it harder for us to interact.

The rapid transition to online school — for those who hadn't made that choice themselves — has come with many downsides, from increasing inequality to the "Covid slide," which has seen children lose some of this year's learning, becoming less prepared to advance.

But after millions of schoolchildren suddenly transferred to cyber school, some are finding a surprising upside: Complicated social dynamics can simplify, sometimes evaporate, as they learn online.

"During this pandemic, I have heard countless examples of good behaviors occurring, children exhibiting increased empathy for others," Stacey Kite, a professor in the College of Arts & Sciences at Johnson & Wales University, and an expert on bullying, said.
"Moreover, children who did not want to go to school because they were bullied are now flourishing with the online learning. They are also finding ways to connect with their peers through this mode, which may transfer into real friendships."

One reason: Absence makes the heart grow fonder. "Kids are craving their peers and they're missing people they weren't even that close with before," Graber said.

Markets across Asia also recorded steep declines, after Beijing recorded a fresh cluster of cases of the virus, originating in the city's largest wholesale food market.

It's an outcome no one wants, but could become a "harsh reality": a second wave of shutdowns.

Weeks after lifting stay-at-home orders, some US states are seeing record numbers of hospitalizations from Covid-19 as thousands more Americans get infected every day.

"We're going to have to face the harsh reality in some states that we may need to shut down again," said Dr. Jonathan Reiner, a professor at George Washington University School of Medicine.

And the second wave of state shutdowns could be more damaging than the first.

"Because of quarantine fatigue, because of the economic effects of quarantine, another round of shutdowns might have even larger effects on businesses that may be on the edge of not being able to stay solvent," said Dr. Christopher Murray, director of the Institute for Health Metrics and Evaluation at the University of Washington.

How Americans can prevent another round of shutdowns:

While states try to revive the economy, the fate of this pandemic is largely up to individuals. 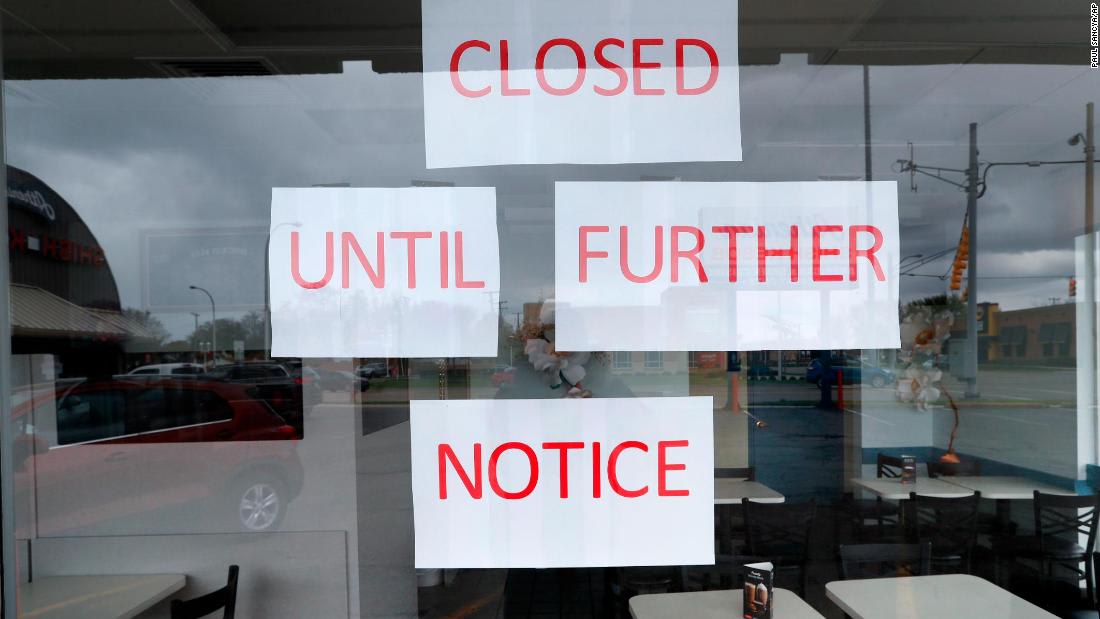