More than 2 million people in the US have been infected with coronavirus and more than 116,900 have died, according to data from Johns Hopkins University.

Health experts are warning that more infections and deaths are in store as states continue their reopening plans.

Here's how states are trending in new cases from one week to the next: 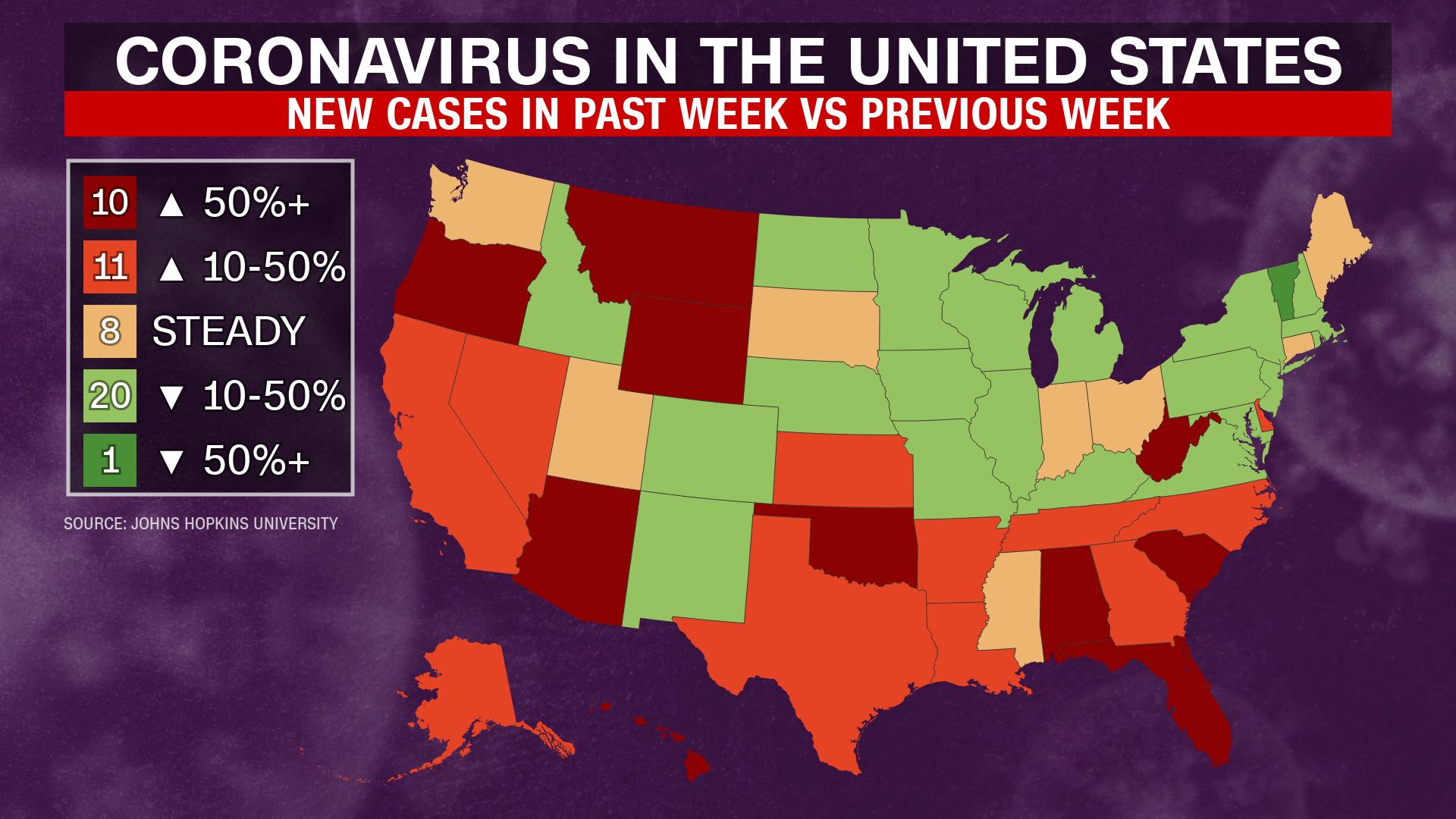 New Zealand’s Prime Minister said on today that the two new coronavirus cases reported on yesterday was due to an “unacceptable failure of the system.”

“This case represents an unacceptable failure of the system. It should never have happened and it cannot be repeated” said Prime Minister Jacinda Ardern.

The cases marked the first instances of coronavirus in New Zealand to be reported in 24 days, according to the country's Ministry of Health.

The two cases are both women from the same family who arrived in New Zealand from the UK via Australia and were permitted on compassionate grounds to leave an isolation hotel in Auckland and travel to Wellington via private vehicle to visit a relative who has since died, Director-General of Health Dr. Ashley Bloomfield said in news conference yesterday.

Ardern also announced on today that she would appoint the military to oversee New Zealand’s quarantine process saying, "I am appointing the assistant Chief of Defense Air Commodore Darryn Webb to oversee all quarantine and managed isolation facilities, including the processes around the exit of those who have been in these facilities.”

“From the beginning, we have taken an extraordinarily cautious approach at the border. That is why we have required every returning New Zealander to go into a facility that we manage. That protocol remains,” Ardern said.

Around 356,000 people linked to the Xinfadi market coronavirus cluster have been tested according to Beijing officials.

Those tested include residents in the surrounding communities, those who have been tracked by big data and personnel in various markets across the city according to Zhang Qiang, an official with the Beijing government.

Beijing’s testing capacity currently stands at around 400,000 tests a day but will continue to increase, the Beijing official said.

Zhang added that some residents were tested after reporting themselves to authorities during “community door-knocking initiatives.”

The Mayor of London Sadiq Khan says he will take an "immediate" 10% pay cut to his $191,574 (£152,734) salary because London's public finances "are facing unprecedented challenges" due to the "devastating impact" of Covid-19.

"In these extremely difficult times, I promise to do all I can to protect our city’s frontline services. This includes taking an immediate pay cut," Khan tweeted Wednesday.

The Greater London Authority (GLA) -- the devolved regional governing body of London, which Khan is in charge of -- faces a forecast £493 million ($618 million) budget shortfall over the next two years “as a result of an unprecedented loss of business rates and council tax income, caused by Covid-19, that is hitting every local authority in the country,” according to a press release.

He urged the UK government to support local and regional authorities across the UK, warning that London's Metropolitan Police, London Fire Brigade, Transport for London and the GLA will otherwise face "significant cuts" at the "worst possible time."

“Londoners did the right thing to tackle Covid-19 by following the rules, staying at home and helping to save lives. But now the government is punishing them with a new era of austerity," Khan said in a statement.

“Unless ministers act, the current number of police officers will need to be reduced and it will be impossible to tackle youth violence or make the changes to the London Fire Brigade that are desperately needed after the awful Grenfell Tower tragedy.”

The salaries of Khan's 15 direct political appointments will also be frozen as part of the cost-saving measures.

A German pharmaceutical company has been authorized to launch human trials for a vaccine against coronavirus by the federal institute for Vaccines and Biomedicines.

CureVac, a company based in Tuebingen, will start testing on 168 healthy volunteers and is the 11th authorized clinical trial for a preventive vaccine globally.

The announcement comes on the same day that a district of the German capital has placed more than 300 households into quarantine after 57 new outbreaks were registered.

Norwegian Air is to operate 76 European routes from its Scandinavian hubs from July, the low cost airline announced on Wednesday.

At the peak of the outbreak in April, the airline reduced their fleet to eight aircraft on domestic Norwegian routes. The airline will reintroduce 12 aircraft to facilitate the European routes.

According to a statement, these routes will include popular tourist destinations such as “Spain, Greece and key European cities.”

The airline said travelers aged six years and older must use a facemask, as recommended by the European aviation authorities.

It's been 100 days since a ball was last kicked in the English Premier League.  While many fans are getting excited, not everyone is convinced now is the right time to return.

On Wednesday, Aston Villa hosts Sheffield United, while Manchester City faces Arsenal. All of the league's remaining 92 fixtures will be held behind closed doors.

However, a recent YouGov survey found that 48% of adults thought the Premier League was returning too soon as the UK emerges tentatively from lockdown.

The restart comes at a point when some regions, such as the northwest of England, have been identified as potential hotspots for the virus with infection rates decreasing more slowly.

There have also been concerns whether fans might congregate outside of stadiums, notably in the city of Liverpool where Jurgen Klopp's side could clinch its first league title in 30 years with victory over local rival Everton on Sunday if Arsenal beats Manchester City.

More than 300 households in the Berlin district of Neukoelln have been placed into quarantine, after 57 new infections were registered.

Christian Berg from the Neukoelln Town Hall told CNN that seven apartment buildings had been affected in the densely populated district in the capital.

Germany's response to the pandemic has been widely praised, with only 8,840 deaths due to the virus relative to its population of more than 80 million people.

She, along with French President Emmanuel Macron, have taken the lead on the European Union's response to the virus, steering the bloc towards agreeing a €500 billion recovery package.

Matt Hancock, the UK's Health Secretary, has said dexamethasone, the steroid that has emerged as a treatment for those worst affected by coronavirus, is “brilliant news for everybody,” but that it is not a cure.

Speaking to Sky News Wednesday morning, Hancock, pictured above, said “this is really really good progress, it is one of the best pieces of news we have had through this whole crisis.”

On Tuesday, two investigators of the Recovery Trial, a large UK-based trial for potential Covid-19 treatments, said that a low-dose of dexamethasone was found to reduce the risk of death by a third among hospitalized patients requiring ventilation in the trial.

Hancock added that it was important to not re-import the virus from nations now seeing a spike in cases.

“We have got to have the quarantine program in overall because there are some countries where it‘s increasingly looking as if the virus is out of control,” he said.

The R-rate, which reflects the speed at which the virus is spreading, is below 1, according to the “latest science,” Hancock said. A number above 1 means each case is passed to more than one other individual, causing the disease to continue its spread.