The Florida Department of Health is reporting an additional 3,207 cases of coronavirus on Thursday, bringing the state total to 85,926, according to data released by the state.

As of Wednesday, the state of Florida had reported a total of 82,719 cases.

Thursday's numbers mark the highest number of reported cases in a single day the state has seen, according to to the Florida Department of Health.

Kraft said she doesn't think the US "can survive another shelter-in-place economically" when asked about the uptick in new coronavirus cases in places like Florida.

"Now we've got to figure out how can we protect people at the same time they're going about their daily lives," Kraft said. "We have to focus on living with Covid. There's not going to be a post-Covid world for a long time."

Kraft urged people to wear masks and carry hand sanitizers in an effort to reduce transmissions, despite claims from President Trump that the virus "is dying out."

"Please understand that you have within your abilities to make a difference and diminish transmission. Wearing a mask or not wearing a mask shouldn't be how you're going to vote in the upcoming election. It's really about protecting yourself from an infection," she said.

The mayor said he woke up to good news of the city’s Covid-19 indicators being down and that means the city is ready to enter phase two.

Phase two includes opening restaurants for outdoor seating, hair salons and barbershops along with a host of other businesses, de Blasio said.

De Blasio also said he signed an executive order this morning allowing restaurants to open and have outdoor seating.

Restaurants will be able to use outdoor areas for seating. Here are some of those details:

Businesses will work with the Department of Transportation to work on seating.

New coronavirus cases are spiking in some states across the US, even as President Trump claimed the virus is "dying out."

"If you look, the numbers are very minuscule compared to what it was. It's dying out," Trump said yesterday. 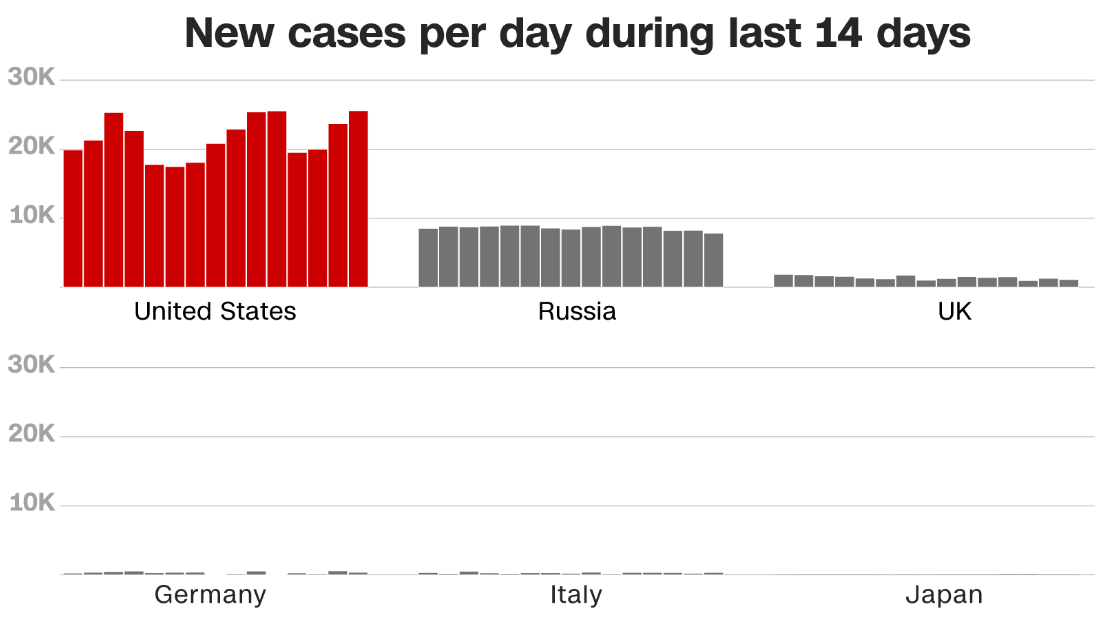 And here's a closer look the number of new confirmed cases across the US and in other countries: 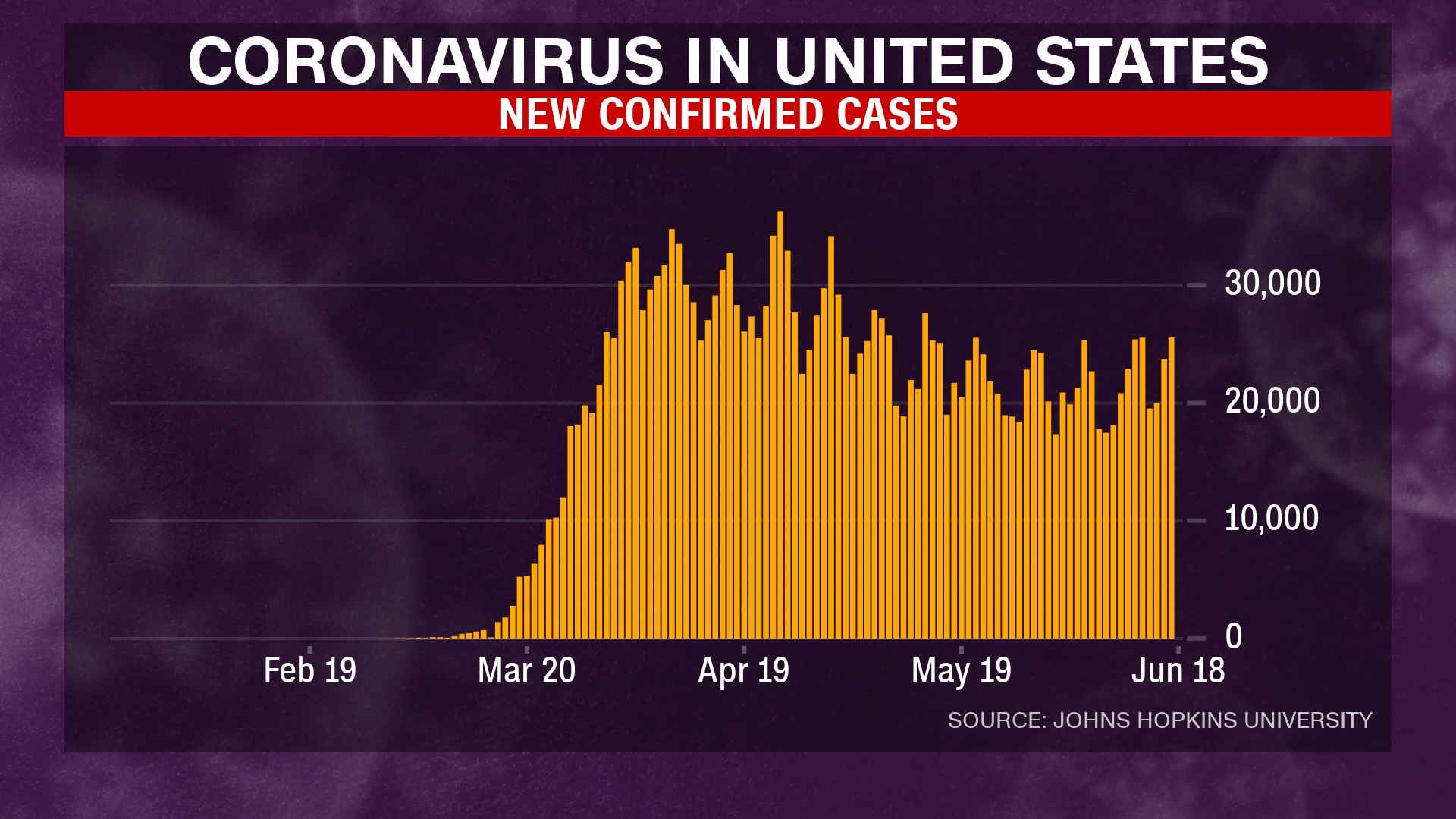 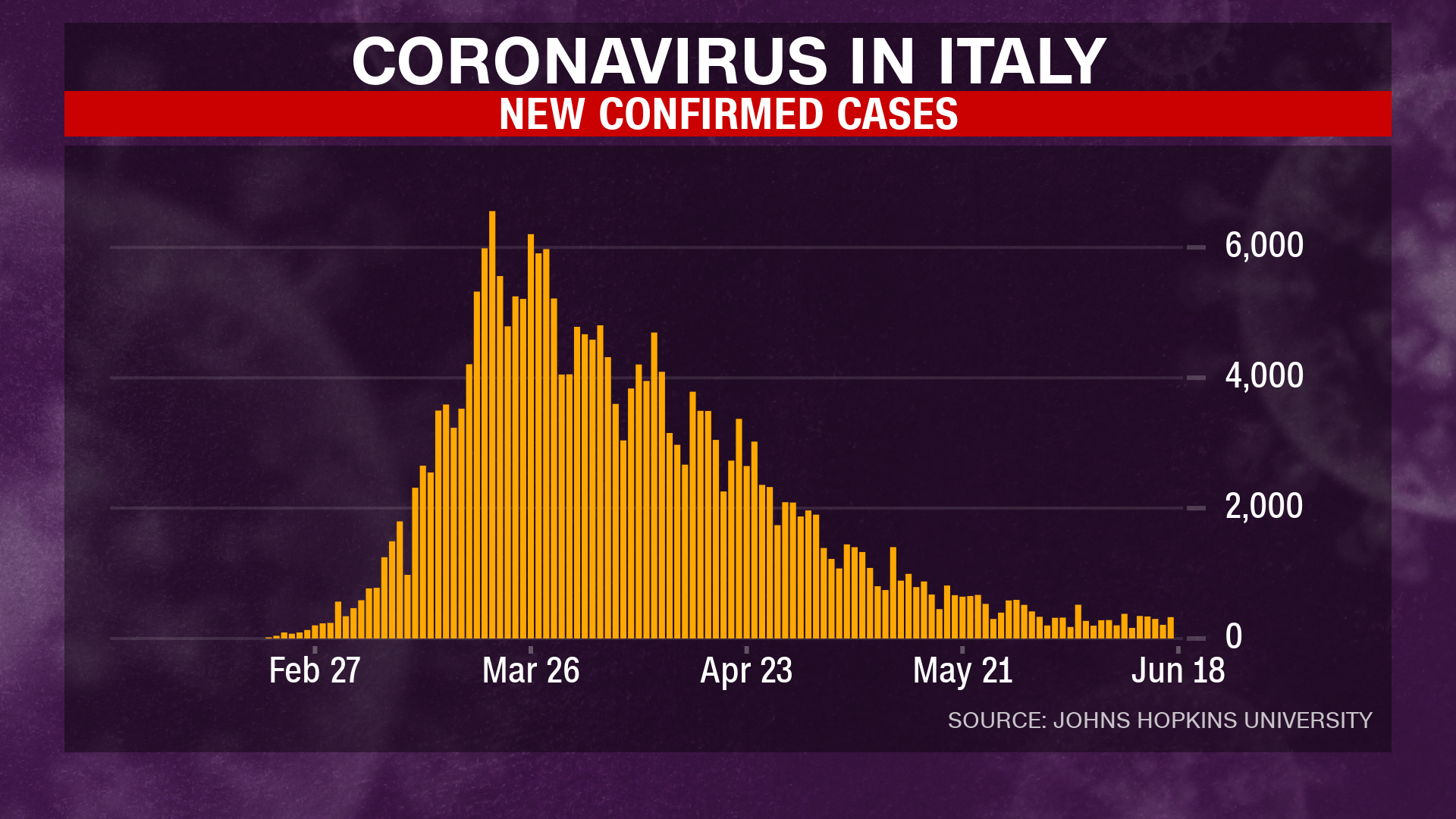 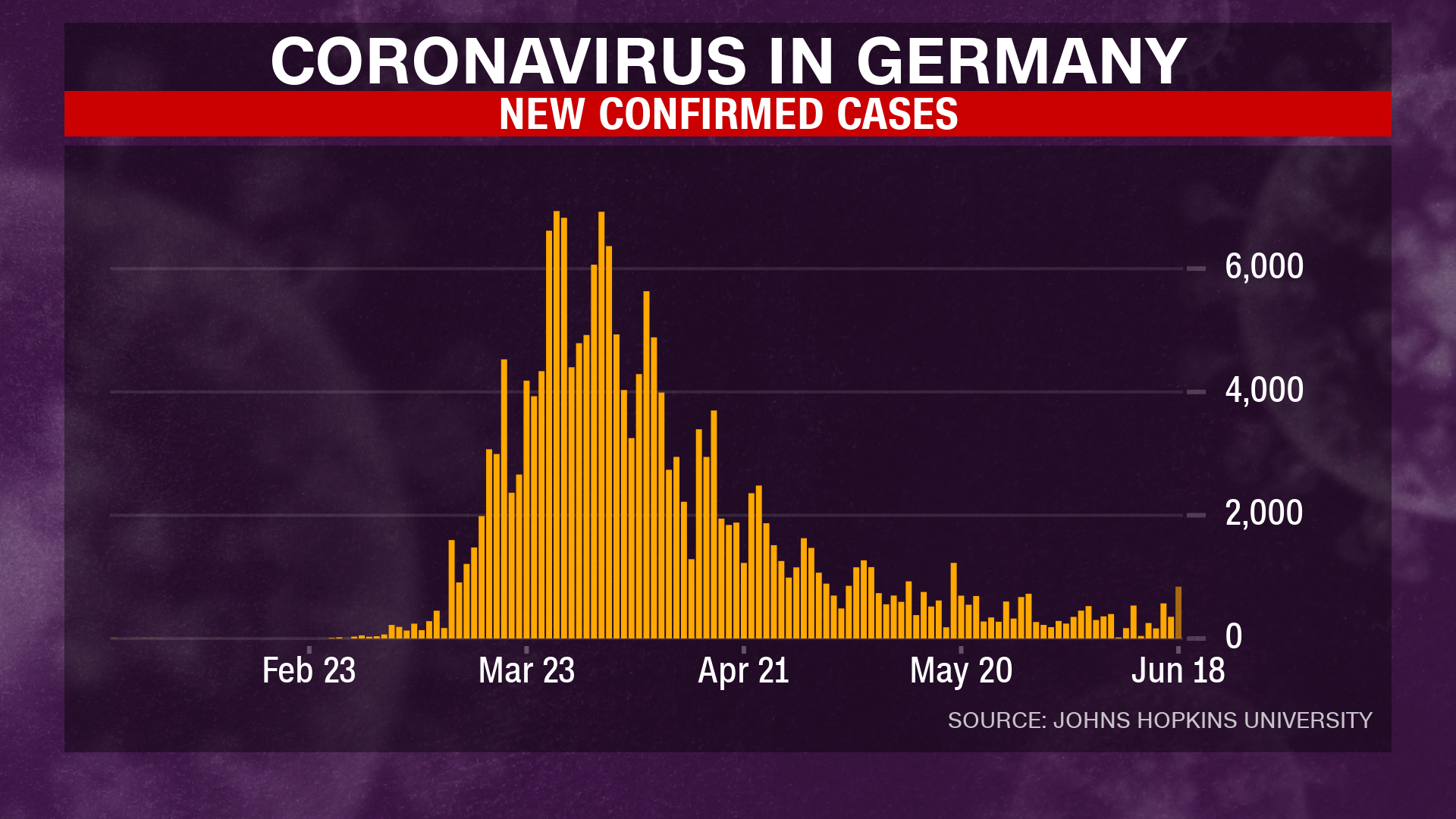 A new report from Johns Hopkins Bloomberg School of Public Health offers up a national strategy for expanding coronavirus antibody testing across the United States, and recommends that the US Centers for Disease Control and Prevention lead a "consistent, standardized effort" to perform such testing nationwide.

Antibody tests, also called serologic tests or serosurveys, look for evidence of an immune response to coronavirus infection and then use that evidence to determine if you have been infected with the virus in the past, even if you never developed symptoms or had an official diagnosis. A serosurvey then can show what proportion of the population has been previously infected.

The new report, published online Thursday and authored by eight experts affiliated with Johns Hopkins University, describes the value of serosurveys and provides recommendations for the US government and states on how to effectively perform these tests amid the Covid-19 crisis.

"The US government should take this opportunity to lead these serosurveys to ensure that resources are used efficiently, and the data collected can be used to improve the public health of Americans in the future," the researchers wrote in the report.

The report acknowledged that "budget must be carefully considered" when designing serosurveys, which can be expensive -- possibly costing up to millions of dollars, depending on the size, cost of tests and storing samples, among other factors. Serosurveys for the common flu can cost about $3.53 million for one project, for example, and surveillance studies for HIV can cost about $708,000 for one project, according to the report.

The report also noted that once serosurveys are conducted, the US government should create a central repository or database for the new data being collected to reside -- and the CDC could lead the way in designing the serosurveys and their protocols.

"A central repository, similar to that found in ClinicalTrials.gov, would be a valuable resource to include all serosurveys, including their methodology, timelines, and purpose. A systematic method of entering data on serosurveys would then allow studies to be easily compared and could also allow individuals to access serosurveys in their area," the researchers wrote in the report. "Right now, states are designing and initiating their own studies, but having a consistent protocol for carrying out serosurveys would make findings more valuable."

The report added that employers and universities using antibody tests "should be strongly encouraged to register their studies" in that central repository.

The report also emphasized that validating serological tests remains critical for ensuring that tests are indeed producing accurate results. In early May, the US Food and Drug Administration announced that the National Cancer Institute would be helping to validate antibody tests on the market -- yet no results from those validation studies so far have been made public, according to the Johns Hopkins report. The report says, "The FDA, NIH, CDC, and NCI should release the results of their antibody test validation study."

Overall, the researchers wrote that "serosurveys can generate valuable data on the true prevalence of SARS-CoV-2 infection that can better inform public health decisions at a population level."

US stocks opened lower on Thursday, with the Dow and the S&P on track to add onto their losses from the prior session. Both indexes snapped a three-day winning streak Wednesday as momentum in the market fizzled out.

Stocks had been rallying on high hopes for the reopening of the economy. But rising numbers of Covid-19 cases in some areas around the world put a damper on this optimism.

Jobless claims data didn’t move the needle much for stocks, either. Another 1.5 million Americans filed for first-time unemployment benefits last week, bringing the total number of initial claims to more than 45 million since mid-March.

Here's how the markets opened:

Days before President Trump is set to hold a massive campaign rally in Tulsa, the city and Oklahoma are seeing record numbers of new coronavirus cases.

Oklahoma is among nine other states that are seeing record-high seven-day averages of new coronavirus cases per day, according to a CNN analysis of data from Johns Hopkins University.

In Tulsa, ninety-six residents tested positive for Covid-19 in the past day, Dr. Bruce Dart of the Tulsa Health Department said yesterday in a news conference.

That was a new daily record for the county, according to Dart. He said the number of cases reported are continuing to set new records.

Trump's campaign is moving forward with plans for Saturday night's event in Tulsa despite complaints from local officials and dire warnings from public health experts about the dangers of packing 20,000 people into cramped indoor quarters amid the coronavirus pandemic.

Dart issued a warning yesterday ahead of the rally saying that "anyone planning to attend a large scale gathering will face an increased risk of becoming infected with Covid-19."

Oklahoma Gov. Kevin Stitt said in a news conference yesterday that more than 1 million requests have been made to attend the rally.

Stitt will be at a roundtable today at the White House on reopening, according to White House deputy press secretary Judd Deere.

Some background: Rallygoers that RSVP for the event ahead of time must agree to a disclaimer that is designed to absolve the campaign of liability should an attendee contract the virus.

Campaign officials say they have plans to take the temperature of every person who enters the building as well as offer hand sanitizer and masks. Wearing the masks, however, will not be required and the campaign concedes that there will be no attempt at social distancing.

A judge on Tuesday denied an emergency motion to stop Trump's campaign rally. The decision came after local lawyers asked the court to block the event unless organizers agreed to take steps to adhere to the administration's own social distancing recommendations to limit the spread of coronavirus.

Despite these concerns, the Trump team said it believes now is the time to turn the page on the coronavirus.

"The freedom of speech, the right to peacefully assemble is enshrined in the First Amendment of the Constitution and the President and I are very confident that we're going to be able to restart these rallies to tell the story of what the President has done thorough these unprecedented times but also over the last three and a half years," Pence told Fox.

The school added: “Each student-athlete that tests positive is medically managed according to current local, state, national, and CDC guidelines, which begins with self-isolation for 10 days and until the patient is without fever for 72 hours without medication, whichever takes longer. These guidelines would also include quarantine for any individuals known to have been in contact with someone who tested positive.”

After Kansas State reported two student-athletes had tested positive for coronavirus one day before on Tuesday, the school's athletic director Gene Taylor said in a statement: "We will always keep our focus on the health and well-being of our student-athletes and staff, a small number of positive tests was something that we were anticipating based on what we are seeing from across college football, and our medical staff and coaching staffs are well-prepared for the next steps. While we know this is a very fluid situation, we have a great plan in place and all of our student-athletes have done their part in following the correct procedures to return to campus."

Football players had returned to the school for voluntary workouts on Monday but after the most recent cases, student-athletes will not be allowed to work out on campus until July 1.

The Spanish government announced a plan to boost its hard-hit tourism sector, worth 4.25 billion euros, nearly $4.8 billion, on Thursday.

Tourism has been among the hardest hit economic sectors by the Covid-19 pandemic, representing about 12% of the country’s GDP, and employing more than 13% of Spain’s workers, according to the government’s statistics.

Some 1.2 million people will benefit from the plan, which is part of Spain’s social and economic Covid-19 reconstruction scheme as it transitions out of the crisis, according to the government’s press release.

Some 200,000 euros will go toward health safety schemes and measures to prevent the spread of Covid-19, including practical steps such as disinfection and cleaning, to “ensure safe and sustainable tourism," as outlined in the government’s plan.

The provisions in the plan include loan guarantees for businesses in the tourism industry, to benefit both companies and workers, some 25 million euros worth of incentives for airlines, Spain’s airports authority AENA will reduce landing fees, 859 million euros will go to sustainability and renewable energies, as well as modernizing and digitalizing the industry.

The government says the plan announced today will bring the aid committed to the tourism sector since the start of the pandemic to a total of 19.53 billion euros.

Spain will reopen its borders from most European Union countries on June 21, when the country’s state of emergency, in place since mid-March, will be lifted.