Gov. Andrew Cuomo praised the effort across New York to bring its coronavirus infection rate to below 1%.

Cuomo said he fears that rate could increase as "people who get on airplanes and they come to New York, and they could bring the infection with them."

People are already lining up outside of the Bank of Oklahoma Center in Tulsa about 48 hours before a President Trump's campaign rally.

CNN reports that about 20,000 people are expected to attend the event in the convention center on Saturday, and another 40,000 people to be in the overflow section outside the venue — giving the rally the potential to be the largest gathering in the country since the start of the pandemic.

CNN Political Correspondent Abby Phillip reported that local officials are saying up to 100,000 people could be coming to the city for the rally, but also for other counter-events happening a few blocks away.

The Trump campaign has said they will be giving out hand sanitizer and masks, but they won't be required.

Some context: As of this morning, Tulsa County currently has the most cases – 1,825 total – of any county in the state, according to the Oklahoma State Department of Health.

New cases in Tulsa County have also been climbing, and the county is now seeing its highest seven-day average for new cases at 73.9, according to the Tulsa Health Department. 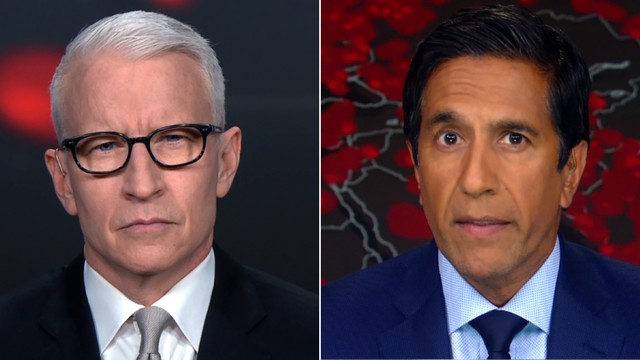 Dr. Sanjay Gupta implored people to continue wearing masks because Covid-19 can be spread by asymptomatic people "even if they're not showing symptoms."

To put the number of deaths in perspective, Gupta said "essentially two jumbo jets of people every 24 hours" die from the virus.

Some context on infections: Just as much of the US was improving, 10 states are seeing their highest seven-day average of new coronavirus cases per day since the pandemic started months ago, according to a CNN analysis of data from Johns Hopkins University.

Texas also reported a record-high number of daily Covid-19 hospitalizations on Monday, with 2,326.

Los Angeles County, which accounts for almost half of California's cases, on Wednesday reported another single-day high of new cases, though officials said the spike was due to lagging test reports.

An ensemble forecast published by the US Centers for Disease Control and Prevention now projects 135,461 coronavirus deaths in the United States by July 11, with deaths increasing in nine states.

This week’s national forecast relies on 21 individual forecasts from outside institutions and researchers. The new projections, published Thursday, forecast a possible range of 129,000 to 145,000 deaths.

“The state-level ensemble forecasts suggest that the number of new deaths over the next four weeks in Alaska, Arizona, Arkansas, Florida, Hawaii, North Carolina, Oregon, South Carolina, and Utah will likely exceed the number reported over the last four weeks,” the CDC said on its forecasting website.

“For other states, the number of new deaths is expected to be similar or decrease slightly compared to the previous four weeks," the CDC added.

Some context: Unlike some individual models, the CDC’s ensemble forecast only offers projections for the next month.

The previous ensemble forecast, published last Friday, predicted 130,000 deaths from coronavirus in the US by July 4. So far, according to Johns Hopkins University, more than 118,000 people have died in the US.

The National Football League Players Association has responded to comments from Dr. Anthony Fauci who told CNN that unless players are in isolated a bubble, "it would be very hard to see how football is able to be played this fall."

NFL Players Association (NFLPA) medical director, Dr. Thom Mayer, said the comments from the nation's top infectious disease doctor "carry important weight as he has served our country with expert guidance and moral clarity through many crises," according to a statement from the NFLPA.

"As we have communicated to our players throughout the spring, we know that there are significant challenges to the operation of football during a global pandemic," the statement said. "So far, we have been guided and made decisions based on the best available science and current state of infections and hospitalizations. Our joint task force is comprised of experts in multiple areas who are working everyday (sic) with health and safety in mind."

Mayer said the NFLPA "will continue to update you as we move forward through the summer.”

There are now at least 2,185,873 cases of coronavirus in the US, according to a tally by Johns Hopkins University.

Approximately 118,334 people have died from the virus.

Michigan State’s athletics department said in a statement that an athlete has tested positive for Covid-19 after the school tested 124 student-athletes on Monday. The statement does not specify which sport the athlete is a part of.

Additionally, a student-athlete did not report to campus after testing positive for the virus at home last week.

The statement said the student will be isolated for 10 to 14 days.

"During this time, daily check-ins with athletic training staff will be conducted, with additional services provided as directed by the medical and administrative staffs. Further testing and physician follow-up will be required prior to returning to any level of workouts," the statement said.

Michigan State Athletics also said players who tested negative will be tested again on June 22 and "a second negative test result is required before being cleared to take part in voluntary workouts."

When San Francisco implemented its shelter-in place order in mid-March, coronavirus continued to spread through the city’s Hispanic population in parts of the densely populated Mission District, researchers at the University of California, San Francisco reported Thursday.

For the first six weeks the ordinance was in place, the virus continued to spread among the low-income Latino population in a crowded 16-block area of the district, they found.

The team at UCSF worked with the San Francisco Department of Health, the state of California and community organizers on an initiative offering free Covid-19 tests, both nasal swab tests to diagnose active infections and antibody tests to find past infections. They reached almost 4,000 people in the area between April 25-28.

The results: They found that 2% of those given a PCR test – the most accurate type of diagnostic test – were infected with Covid-19 at the time of the test.

Among those who tested positive, infection rates were almost 20 times higher for Hispanic residents than non-Hispanics and 3.5 times higher among immigrant workers than for residents in the district.

Antibody tests indicated 6% of residents had contracted the virus at some point since the beginning of the pandemic, the researchers said in their pre-print report, which has not yet been peer-reviewed.

After comparing the tests, researchers reported, “the vast majority (96%) of new infections were occurring in the Latinx community, whereas those infected earlier in the pandemic were somewhat more representative of the neighborhood as a whole (67% Latinx, 16% white and 17% other).”

Many of those infected could not work from home and could not miss work. Other risk factors for those contracting the virus later, in late April, for example, included frontline service work, unemployment and a household income of less than $50,000 a year.

Jackson Health System in Miami, Florida, has seen a 46% increase in Covid-19 patients in the past 10 days, according to a hospital spokesperson.

Jackson Health has discharged a total of 683 Covid-19 patients since the pandemic began. Jackson Health System is a non-profit academic medical system.