All mall customers will be required to wear face coverings at all times while inside, and stores will be limited to 50% capacity.

Theaters and arcades will remain closed, and restaurants may provide take out or outdoor dining.

“Certainly malls are part of New Jersey culture and lure. I think as much here if not more so than any American state,” Murphy said.

Reminding reporters about other states, including Florida, which issued a mandatory quarantine on New Yorkers coming to their states approximately 100 days ago, Cuomo acknowledged that experts have advised him to issue a quarantine for people coming to the state and he is considering it now.

“Fast forward 100 days. Now we’re afraid they’re bringing the virus to our state. That’s why I say, tale of two cities, two countries, who could’ve, how, how do you explain this. Who would believe this, who would believe this 180-turn around? But, I haven’t made a decision yet, but I have had experts advise me of that. It is a real concern, you’re right it could happen and it’s something I’m considering," Cuomo said.

Arizona health officials have reported a new single-day high for coronavirus cases for the second time in this week, according to the state Department of Health Services.

Thursday's case count marks the state's highest total reported in a single day, behind Tuesday's 2,392, according to the health website.

More than 75% of Florida's Adult Intensive Care Unit beds are occupied, according to state data provided by the Florida Agency for Health Care Administration.

Today, the state reported having 22.86% availability of adult ICU beds available in hospitals across the state, the report stated. The data is current as of 10:30 a.m. ET Thursday.

General hospital beds are at nearly 75% capacity across the state, according to AHCA.

This comes as Florida reported more than 3,000 new cases of Covid-19 on Thursday.

New York state is issuing guidelines Thursday to allow some residential and face-to-face programming for fall reopenings, according to Gov. Andrew Cuomo.

Colleges and universities planning for fall returns must develop plans and submit those to the state for approval.

Cuomo cautioned the state still needs more data, but it is starting to prepare plans for K-12 schools as well.

He did not provide specifics on K-12 schools.

The second executive order makes bars responsible for the area immediately in front of their premises including the sidewalk and SLA can enforce this.

“The state cannot do enforcement on these local issues all across the state. I would, we don’t have enough people. SLA doesn’t have enough investigators. We need the local governments to do their part,” Cuomo said Thursday.

The governor said he wants to help ensure there is not a slide back and people don’t get careless.

New York Gov. Andrew Cuomo said that yesterday the state tested the most people in one day, yet and had the lowest percent positive test results "since we have started."

By the numbers: On Wednesday, Gov. Cuomo said New York conducted 68,541 tests and only 618 came back positive — a .90% positivity rate across the state.

New York Gov. Andrew Cuomo said that while a final decision will not be made until tomorrow, New York City businesses should prepare to begin phase two of reopening on Monday.

Cuomo said experts will review the city's data to determine if it's meeting key metrics for reopening — but added that "all the indications are good."

"Everybody's feeling good," Cuomo said, adding that his advice to businesses that can reopen under phase two to be ready for Monday.

Here's a look at what will reopen under phase two: 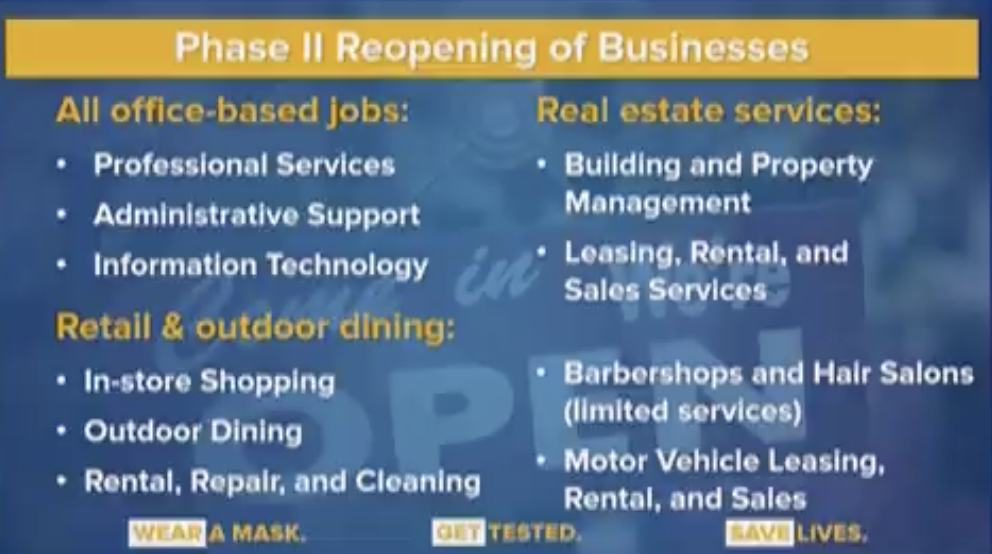 People who have coronavirus infections but never develop symptoms could have weaker immune responses to the virus, a new study suggests.

The small study, published in the journal Nature Medicine on Thursday, found that a group of about three dozen Covid-19 patients who were asymptomatic had levels of antibodies that were significantly lower than what was found among patients who had mild symptoms — a finding that suggests the asymptomatic patients had weaker immune responses.

The researchers, from various institutions in Chongqing, China, also found that the asymptomatic patients had a significantly longer duration of viral shedding — in which they could spread the coronavirus to others -- than the symptomatic patients.

The new study included data on 37 Covid-19 patients who were diagnosed before April 10 and developed no symptoms while isolated at a hospital in the Wanzhou District of Chongqing, China. Their health data, taken from blood samples and other tests, were compared with 37 other Covid-19 patients who had mild symptoms.

The data showed that, even though the asymptomatic patients were experiencing no symptoms, they were still shedding the coronavirus — meaning they were infectious — for a median duration of 19 days. That duration of viral shedding was significantly longer than what was found among the patients with mild symptoms, which was 14 days, according to the study.

The data also suggested that certain antibody levels among the asymptomatic patients were significantly lower relative to the symptomatic patients. Antibodies, which are proteins that circulate in your blood to help fight off infections, can hold clues to your body's immune response.

Among the asymptomatic patients, 81.1% had reductions in their neutralizing antibody levels during the eight weeks after being discharged from the hospital — compared with 62.2% of the symptomatic patients. The researchers found some other differences in the patients' health data, suggesting that "asymptomatic individuals had a weaker immune response" to the coronavirus.

The study had some limitations, including that it involved a small number of patients and antibody testing itself is not always 100% accurate. But overall, the researchers wrote in their study that the findings suggest there are potential risks to using "immunity passports" based on antibodies and "support the prolongation of public health interventions, including social distancing, hygiene, isolation of high-risk groups and widespread testing."

Eleanor Riley, a professor of immunology and infectious disease at the University of Edinburgh in Scotland, said that the new study's findings are not surprising.

"The data are in line with several recently reported studies suggesting that those with mild or asymptomatic infections make a less robust antibody response to SARS-CoV-2 than those with more severe disease," Riley said in a written statement distributed by the UK-based Science Media Centre on Thursday.

"The really interesting question, to which we don’t yet have an answer, is why some people develop such mild infections," Riley said in part. "It may be that they are genetically less susceptible to infection or that they have some pre-existing immunity due to prior infection with related seasonal coronaviruses."