Rhode Island Gov. Gina Raimondo announced that phase three of reopening will begin around July 1 and said she hopes phase four can begin in August.

Movie theaters, arcades and bowling alleys can reopen at 66% capacity or 100 square feet per person, the governor said.

Raimondo said the goal to open schools is for August 31. The plan for elementary and middle schools includes keeping students in stable groups of up to 30.

Children should remain in their respective groups at all times and should stay 14 feet apart from other groups. High school students and teachers would have to wear masks if they can't keep six feet apart, Raimondo said.

"Transportation will be hard to figure out," Raimondo said.

Innovative solutions are being explored for how to transport children safely, the governor added.

Massachusetts will allow indoor dining and close-contact services, such as nail salon, to reopen on Monday, as it enters the second half of its phase two reopening, Gov. Charlie Baker announced on Friday.

Offices may also increase office capacity from 25% to 50% capacity, the governor said.

The announcement comes after Covid-19 hospitalizations dropped below 1,000, the lowest since at least mid-April, according to the governor.

The state will wait for at least two weeks of data from indoor dining before considering moving into phase three of its four-stage reopening plan, pinning that start date to the beginning of July at the earliest, the governor indicated.

In phase three, fitness centers, museums, theaters overnight camps and other businesses would be allowed to reopen, according to the state's website. Large out door gathering would also be allowed to convene.

She said the decision by aides to wear masks or not is “personal.”

“It’s a personal choice. I won’t be wearing a mask. I can’t speak for my colleagues,” McEnany said.

“It’s a personal decision,” she said. “I’m tested regularly. I feel that it’s safe for me not to be wearing a mask.”

Asked earlier in the briefing whether anyone in the White House had any reservations about proceeding with the rally despite a recent spike in coronavirus cases in Oklahoma, McEnany said no one was concerned.

“We are all on board for going to Oklahoma,” she said.

Masks will be provided for attendees at the rally, but people will not be required to wear them.

Oklahoma is seeing a steady increase in its average of new confirmed cases per day.

According to a CNN analysis of Johns Hopkins University data, Oklahoma averaged about 247 new cases per day over the week ending June 18, which is approximately 140% higher than the previous seven-day period.

The White House said the demise of public coronavirus task force briefings is due to establishing a "regular routine" after the height of the pandemic.

She said the public briefings only came during the "very early days of Covid and the pandemic," though those briefings transpired daily for more than a month.

She said that "now we're in a more regular routine," the briefings are no longer necessary.

“We don’t have regular updates for you other than for the updates I give you as news merits and I’m regularly in consultation with Dr. (Deborah) Birx and the others," McEnany said.

Texas public schools can return this fall, according to the Texas Education Commissioner, but families with health concerns will have some flexibility for remote education.

The state will not impose a statewide mask requirement and will allow districts to create their own rules on facial coverings.

“It will be safe for Texas public school students, teachers, and staff to return to school campuses for in-person instruction this fall. But there will also be flexibility for families with health concerns so that their children can be educated remotely, if the parent so chooses,"  Texas Education Commissioner Mike Morath said in a statement.

Frank Ward, a spokesperson for the Texas Education Agency, said districts will have latitude on mask requirements. "We want to emphasize local control."

The agency will issue more specific guidance for reopening schools on Tuesday.

There are no specific definitions for classifying a second wave or a second peak of coronavirus, Dr. Mike Ryan, executive director of the World Health Organization’s Health Emergencies Program, said during a briefing on Friday.

Ryan did explain some differences between both:

A second wave, Ryan said, is when “a number of cases rises and it falls down to a very low or detectable level.”

“There’s a period of time in which there's very low or no activity, and then the disease returns in a large way. That's what we see with seasonal influenza,” Ryan said.

A second peak is a different concept — one that “many countries are facing now,” Ryan said.

“When they've come off the peak of the first wave, but they haven't reduced the disease down and they're in a steady state where they're struggling to reduce the incidence of the disease, and then they get a second peak,” Ryan said. During a second peak, community transmission is still occurring, he added.

“The second peak depends on how good, how strong and how effective the control you have over the disease at this present moment. If you start to experience a second peak, then the chances are that the disease is spreading in a way that you have not got full control over that,” Ryan said.

The impact of testing: Ryan added that sometimes when countries get better at testing, their number of cases often goes up.

To gauge if this is part of a second wave or peak, Ryan said look for these markers: “It's very important at that time to look at things like hospitalizations and deaths. If you start to see hospitalizations going up, that's not because of testing.”

Equally important, Ryan said countries should be watching for clusters in places where transmission is very low.

Apple announced on Friday that it will temporarily close some stores in Florida, North Carolina, South Carolina and Arizona due to current Covid-19 conditions.

“We take this step with an abundance of caution as we closely monitor the situation and we look forward to having our teams and customers back as soon as possible,” the company said in a statement.

The announcement comes as all four of those states are seeing record-high seven-day averages of new coronavirus cases per day, according to a CNN analysis of data from Johns Hopkins University.

Florida Gov. Ron DeSantis said in a news conference that the state is starting to see an increase in Covid-19 cases in asymptomatic and younger cohort across the state.

DeSantis blames the uptick in part to "an erosion in social distancing from some of the younger people."

DeSantis also said the seniors in Florida have done a really good job with social distancing and looking out for themselves.

"We are seeing a decline in these facilities which is a good thing" DeSantis said.

Ahead of President Trump’s rally in Tulsa tomorrow, here is a look at Oklahoma’s coronavirus trends: 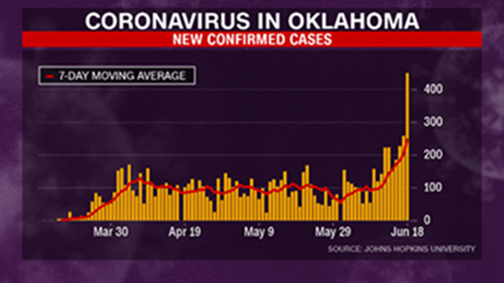