A former Iraqi soccer player has died from coronavirus in Baghdad.

Ahmed Radhi, 56, was one of Iraq's most famous soccer stars in the 1980s. He became the first Iraqi football player to score a goal in the World Cup in 1986 and was voted the Asian Footballer of the Year in 1988.

Radhi was admitted to a hospital in Baghdad on June 13 and died Sunday after testing positive for Covid-19, according to a statement from Iraq's Ministry of Youth and Sports media office.

On Saturday Iraq recorded 1,870 new coronavirus cases and 88 deaths, the highest daily tally recorded in the country since the pandemic began, according to the country's health ministry.

The ministry said Friday that new alternative Covid-19 quarantine centers in Baghdad will be opened soon to handle the unprecedented daily spike in cases.

Actor, comedian and former CNN anchor D.L. Hughley has tested positive for coronavirus after collapsing on stage during a performance in Nashville, Tennessee on Friday night.

"When I came I was being treated for extreme exhaustion and dehydration, which I was very dehydrated. But it turns out they ran a battery of tests, and I also tested positive for Covid-19 which blew me away. I was what they call asymptomatic," Hughley said in his post.

Hughley was taken to Saint Thomas Hospital in Nashville after collapsing. He said he was going back to his hotel room to quarantine for 14 days after leaving hospital.

He ended the video by thanking everyone for their prayers saying, "well thank you for your prayers and your well wishes and a few more of them wouldn't hurt, so hopefully I won't develop symptoms maybe this is as bad as it gets. And I'll just pass out over and over, or not. But thank you, I appreciate your thoughts and your prayers and they did not go unnoticed, or unfelt. Thank you."

Dozens of players from the Louisiana State University (LSU) Tigers football team have been placed in quarantine.

The measure was taken as a precaution against the spread of coronavirus after some members either tested positive for Covid-19 or came into contact with someone who did, according to reports from Sports Illustrated and ESPN, who both cite multiple sources.

Sports Illustrated, who was first to report this story, said at least 30 of the squad's 115 players were placed in quarantine this week.

While she would not confirm how many players have tested positive for Covid-19, she did tell Sports Illustrated, "It’s not surprising we’re seeing the rise right now. It’s a pandemic. We should not be shocked."

LSU has not responded to CNN's request for comment on this story.

Officials in southern US states are warning more young people are testing positive for coronavirus.

The shifts in demographics have been recorded in parts of Florida, South Carolina, Georgia, Texas and other states -- many of which were some of the first to reopen.

And while some officials have pointed to more widespread testing being done, others say the new cases stem from Americans failing to social distance.

In Mississippi, where one health officer called adherence to social distancing over the past weeks "overwhelmingly disappointing," officials attributed clusters of new cases to fraternity rush parties.

In Florida, Gov. Ron DeSantis said cases are "shifting in a radical direction" toward populations in their 20s and 30s.

And in Galveston County, Texas, Dr. Philip Keiser with the local health department told CNN affiliate KPRC they were seeing a lot of infections in young people. 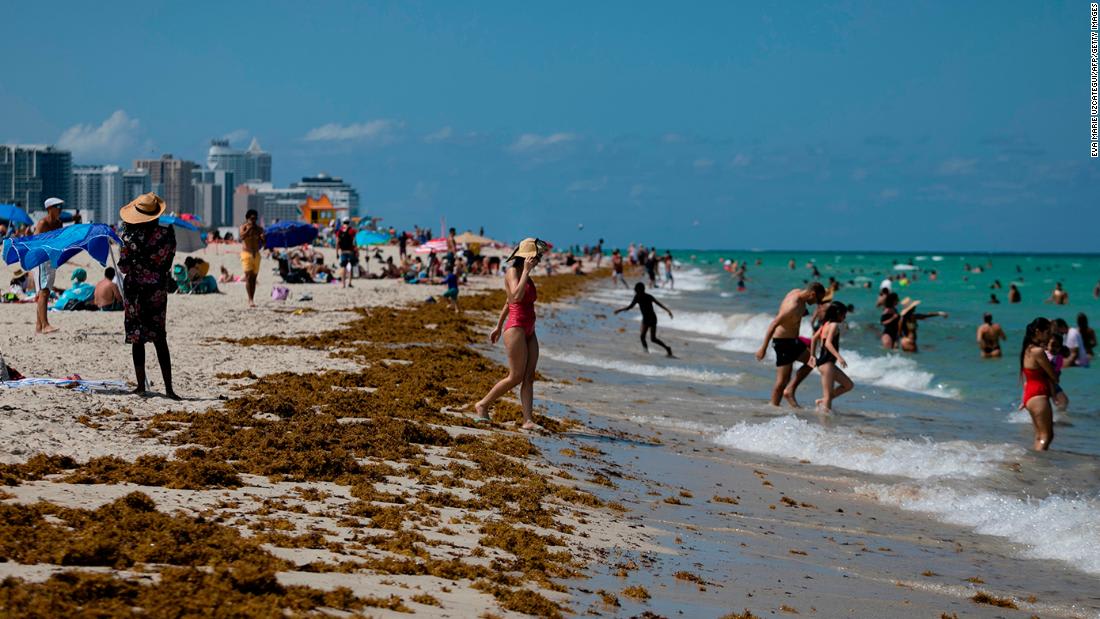 “Yoga helps us boost our strength and build the immunity and metabolism to defeat the pandemic,” said Modi.

"Pranayam or breathing exercise helps us keep our respiratory system in shape, hence making us strong against coronavirus," he added. “During the testing times of the Coronavirus pandemic, the world is realizing the need of Yoga more seriously than ever.”

Modi has encouraged the image of yoga as an Indian cultural export since the first of International Yoga Day in 2015.

People were asked to practice yoga at home on Sunday due to the virus, unlike previous years when the Indian government has organized public programs to celebrate International Yoga Day.

Modi on Sunday described yoga as a unifier. “Yoga enhances our quest for a healthier planet. It has emerged as a force for unity and deepens the bonds of humanity. It does not discriminate. It goes beyond race, color, gender, faith, and nations,” he said.

China recorded 26 new coronavirus cases on Saturday, 22 of which were in the capital Beijing, according to the National Health Commission.

All cases were considered local transmission, except for one person in Fujian who is reported to be an imported case.

Saturday’s figure is slightly down on the 27 confirmed cases detected in China on Friday.

India passed the 400,000 case mark on Sunday, after recording 15,413 new Covid-19 infections, according to its Health Ministry.

That was India's highest daily number of recorded cases, and the fourth consecutive day the country had seen its biggest numbers of new infections.

India also recorded 306 deaths in the past 24 hours, data showed.

In a shocking admission during his Tulsa, Oklahoma, rally on Saturday night, President Donald Trump said he had told officials to slow down coronavirus testing because of the rising number of cases in America.

"You know testing is a double-edged sword," Trump said, while complaining about media coverage of his handling of the virus.

Nearly 120,000 people have died in the United States from the coronavirus and medical experts have said that testing is critical to identifying cases, tracing them and stopping the spread of the virus.

A racist term: At another point during the rally, Trump said Covid-19 had more names than any other disease.

"I can name Kung Flu," he said, using the racist term. "I can name 19 different versions of them."

Trump had previously referred to Covid-19 as the "China virus."

The United States had at least 2,254,662 cases of coronavirus at the end of Saturday, according to Johns Hopkins University's (JHU) tally.

At least 119,719 people have died in the US from coronavirus.

The country recorded an additional 33,701 cases and 607 reported deaths on Saturday.

CNN's interactive map is tracking the US cases: