Indoor dining “limited at first to 25% capacity” can also resume, he posted, adding that additional guidance relating to health and safety will be released “within the next several days.”

Carnival Cruise Line says it is cancelling all cruises through September 30.

Carnival said in a statement, “we have watched with great interest as commerce, travel and personal activities have begun to start back up, and once we do resume service, we will take all necessary steps to ensure the health and safety of our guests, crew and the communities we bring our ships to in order to maintain public confidence in our business. “

Carnival’s decision comes as the cruise industry voluntarily extended the suspension of US cruise operations until September 15 because of coronavirus concerns, according to Cruise Lines International Association, the leading trade organization for the global cruise industry.

Carnival says for guests who were already booked on excursions departing September 30, 2020 or prior, they can choose between a full refund or incentive credits for a future trip.

This announcement comes as Carnival posted a $4.4 billion loss — which works out to $3.30 per share — for the second quarter.

Analysts were forecasting a loss of $1.76 a share. Revenue plummeted 85% to $700 million, missing estimates of about $738 million.

Bowdoin College in Maine announced that only a fraction of its students will return for on-campus and in-person learning for the fall 2020 semester.

The small liberal arts college in Brunswick, Maine, will allow freshman, transfer students, a small number of senior honors students and resident life staff to return to campus, according to a plan laid out Monday by Bowdoin's president Clayton Rose. All sophomores, juniors, and other seniors will remain off campus for the fall semester and will take their courses online.

"I very much wish we could have everyone on campus in the fall, and I know you do as well," Rose said. "The nature of the virus requires us to limit the density of people on campus. While we have taken considerable time to understand the scientific data on the virus, there is still a great deal of uncertainty, requiring us to be both humble and thoughtful about what we do and do not know."

Bowdoin said nearly all classes — including those on campus — will be taught online. The college plans to start classes on Sept. 2, with all students leaving campus before the Thanksgiving holiday and finishing the fall term remotely.

Everyone on campus will be tested for Covid-19 at least two times a week and will be required to participate in a contact-tracing program. All students who return to campus will live in a single bedroom, Rose said.

According to the plan, Bowdoin will not participate in any fall or winter varsity sports for the fall semester, since not all students will be on campus.

At least 16 people have also tested preliminary positive and are awaiting final results.

The latest figures are the highest daily rate since April 3, when 43 new coronavirus cases were recorded.

All 30 confirmed cases have a history of travel – most of whom arrived on repartition flights from Pakistan and the Philippines.

Travelers to Hong Kong are tested on arrival, sent to a hotel pending results, and tagged to ensure that they complete a 14-day quarantine at a specified location and remain indoors.

The number of coronavirus cases reached a milestone on Monday, as the state reports 100,217 cases, according to data released by the Florida Department of Health.

Florida is among at least 10 states that saw their highest 7-day average of daily new coronavirus cases on June 21, according to data from Johns Hopkins.

Health experts worry the Sunshine State could be the next epicenter of the national health crisis.

Gov. Andrew Cuomo said Monday that New York is in a position to keep opening up in phases because the metrics and science used in analyzing the spread of coronavirus have guided the decisions, unlike some states that “did reopening as a political exercise.”

“It was politicized by the White House and some states ran to reopen and just forgot about the metrics and the science when you’re dealing with a virus. You’re now seeing those states spike. New York, we did the exact opposite. We followed the science … I look at the numbers every day and we react to the numbers,” Cuomo told CNN’s Jim Sciutto in an interview Monday morning.

What the numbers say: While the statistics continue to trend in the right direction in states like New York, 10 states that saw their highest 7-day average of daily new coronavirus cases on June 21 according to data from Johns Hopkins. Those states are Arizona, California, Florida, Georgia, Missouri, Nevada, Oklahoma, South Carolina, Texas and Utah.

New York City Mayor Bill de Blasio said he will "absolutely" dine outside tonight — although he has not yet decided which restaurant he'll go to.

"I am very excited that this day has come," de Blasio said at a news conference when asked if he'll eat out at a restaurant today.

“Hundreds of thousands of people will be going back to work today” he said and there is “a real excitement out there.”

“Phase two is really a giant step for this city,” de Blasio said, adding that “this is where most of our economy is.”

Phase two allows for a broader range of businesses to continue to reopen in New York City under Covid-19 guidelines, including retail businesses, restaurants and offices.

One of the biggest moves is the reopening of outdoor dining.

The mayor said that restaurants as part of the reopening for outdoor dining are so important as they are such a big part of the identity of NYC.

There have been 3,192 applications for open restaurants to apply for curb space and roadway space — “they have instantly qualified” and are ready to go today, de Blasio said.

The mayor notes that the city stands ready to help businesses get on their feet.

Over 2 million face coverings have been given out for free and the mayor said they are doubling that.

Subway ridership was up 29% in phase one — getting close to the point of a million subway riders per day. Bus ridership is up 22%. Traffic into manhattan is also up 24% over east river bridges and 10% over Hudson river bridges.

The mayor said mass transit is so crucial to the city and these signs show that the city is coming back online.

The coronavirus pandemic does not appear to be slowing down anytime soon in the United States, warned Michael Osterholm, head of the Center for Infectious Disease Research and Policy at the University of Minnesota in Minneapolis.

"I think this is more like a forest fire. I don't think that this is going to slow down," Osterholm told NBC's Chuck Todd during an appearance on “Meet the Press” on Sunday.

"I think that wherever there's wood to burn, this fire's going to burn — and right now we have a lot of susceptible people," Osterholm added. "Right now, I don't see this slowing down through the summer or into the fall. I don't think we're going to see one, two and three waves. I think we're going to just see one very, very difficult forest fire of cases."

A look at the cases: There are 23 states seeing a rise in new reported cases compared to the previous week, according to data from Johns Hopkins University. Here's where cases are increasing: 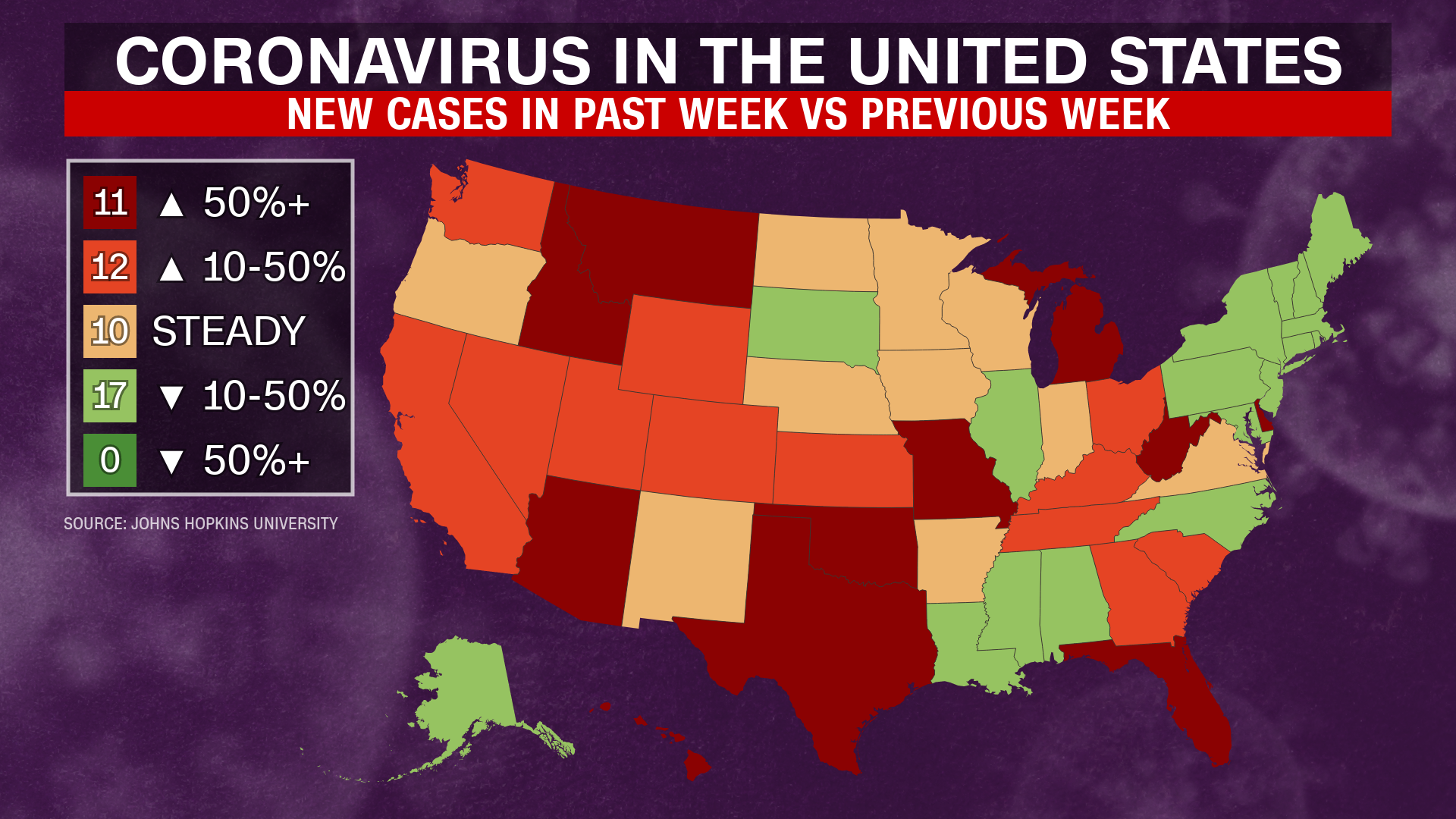