Phase two allows for a broader range of businesses to continue to reopen under Covid-19 guidelines, including retail businesses, restaurants and offices.

One of the biggest moves is the reopening of outdoor dining. Restaurants must follow these guidelines:

Indoor on-premise dining and bar service are not allowed.

Hair salons and barbershops will be allowed to reopen but they must limit the workforce and customer presence to no more than 50% of the maximum occupancy.

Offices will be able to reopen, limiting the total number of occupants at any given time to no more than 50% of the maximum occupancy for a particular area. People must keep a distance of at least six feet at all times, unless safety of the core activity requires a shorter distance.

Malls, specifically any indoor common portions of retail shopping malls with 100,000 or more square feet of retail space available for lease, must remain closed to the public.

Large gatherings and event venues, including places that host concerts, conferences, or other in-person performances or presentations in front of an in-person audience, must also remain closed to the public.

On Friday, Cuomo delivered his final coronavirus briefing with an address from his office in the state Capitol.

"Today, we have done a full 180, from worst to first," he said. "We are controlling the virus better than any state in the country and any nation on the globe."

After the disappointing turnout in Tulsa, President Trump’s aides are debating what his signature campaign rallies will look like going forward, people familiar with the matter say.

There had once been plans to announce another rally for the near future, perhaps as early as the next two weeks, but it now remains unclear when Trump will move forward with his signature political events. Some advisers suggested it could be weeks or even months before Trump attempts another rally, though as of this morning no decisions had been made on how to proceed.

Few people around Trump believe rallies, the President’s political stock-in-trade, will be eliminated altogether. But the empty seats and vacant overflow lot in Tulsa were an indication to those around Trump that their formula needs rethinking during the continuing pandemic and an altered political landscape.

Other officials acknowledged that Tulsa was a sign even Trump’s supporters remain wary of large crowds as coronavirus continues to spread — a reality that may force his campaign to book smaller venues for greatly-reduced audiences.

Whether Trump agrees to smaller rallies remains to be seen. One likelihood going forward: aides seem uniformly to believe that predicting massive turnout ahead of time is a mistake which only sets Trump and his team up for disappointment.

Trump's schedule this week: When the President speaks Tuesday in Phoenix it will be to a group of young supporters, not a rally, though aides are now working to ensure that event appears full. And Trump will visit Wisconsin on Thursday in an official capacity.

Three cases were identified after the city conducted nucleic acid tests on workers who either went to or had close ties with those who visited Xinfadi market, said Ding Sheng, deputy director of Beijing Municipal Commission of Housing.

Xinfadi market is at the center of a new cluster of infections in the Chinese capital.

Since June 11, Beijing has reported 236 cases of Covid-19, according to a statement by the Beijing Municipal Health Commission Monday.

City on alert: For a while at least, Beijing seemed to have all but moved on from the coronavirus pandemic.

For 55 days, the Chinese capital had not reported any locally transmitted infections and life had been returning to normal. Businesses and schools reopened, people went back to work, and the city's public transports and parks were once again teeming with crowds.

But that facade of normality was shattered, when a new set of cases emerged from the sprawling wholesale food market.

The flare-up of infections in Beijing, the seat of Communist Party power and previously considered among the country's safest cities, is a stark reminder of how easily the virus can come back to haunt places where it was thought to have been tamed.

As the number of Covid-19 cases continue to rise in the state of Florida, Miami Beach Mayor Dan Gelber told CNN "we have to get pretty serious about this."

Gelber said there are a lot of young people "who feel like they can do whatever they want and and they have to stop it."

Gelber also said they will shut down restaurants if they have to, he stated however, "we cant let the trajectory continue to a place where we have to shelter in place at home."

Health experts are concerned Florida is showing signs of becoming the next coronavirus epicenter in the country.

The Florida Department of Health reported 3,494 new cases of coronavirus on Sunday, bringing the state total to 97,291. Florida Gov. Ron DeSantis has said that cases are "shifting in a radical direction" toward populations in their 20s and 30s.

DeSantis said Friday that the median age was 37 for newly diagnosed coronavirus infections. In the state, 62% of new cases for the week of June 7 are under 45 years old, he said.

Officials in states across the South have warned that more young people in their 20s and 30s are now testing positive for the novel coronavirus.

This recent rise in cases among young adults could lower Covid-19 death rates, Dr. Tom Frieden, former director of the US Centers for Disease Control and Prevention, wrote on Twitter.

"With younger age of recent infections in at least some places such as Florida, expect a lower death rate in this wave ... until the 20-40 year olds who are infected today go on to infect others," Frieden, president and CEO of the initiative Resolve to Save Lives, tweeted on Sunday.

Some background: The Florida Department of Health reported 3,494 new cases of coronavirus on Sunday, bringing the state total to 97,291. Florida Gov. Ron DeSantis has said that cases are "shifting in a radical direction" toward populations in their 20s and 30s.

DeSantis said Friday that the median age was 37 for newly diagnosed coronavirus infections over the last week. In the state, 62% of new cases for the week of June 7 are under 45 years old, he said.

Shifts in demographics by age have been reported in parts of Florida, South Carolina, Georgia, Texas and other states — many of which were some of the first to reopen following shutdowns.

The novel coronavirus has infected nearly 9 million people worldwide and killed at least 468,500 according to Johns Hopkins University.

If you're just joining us now, here are the latest developments: 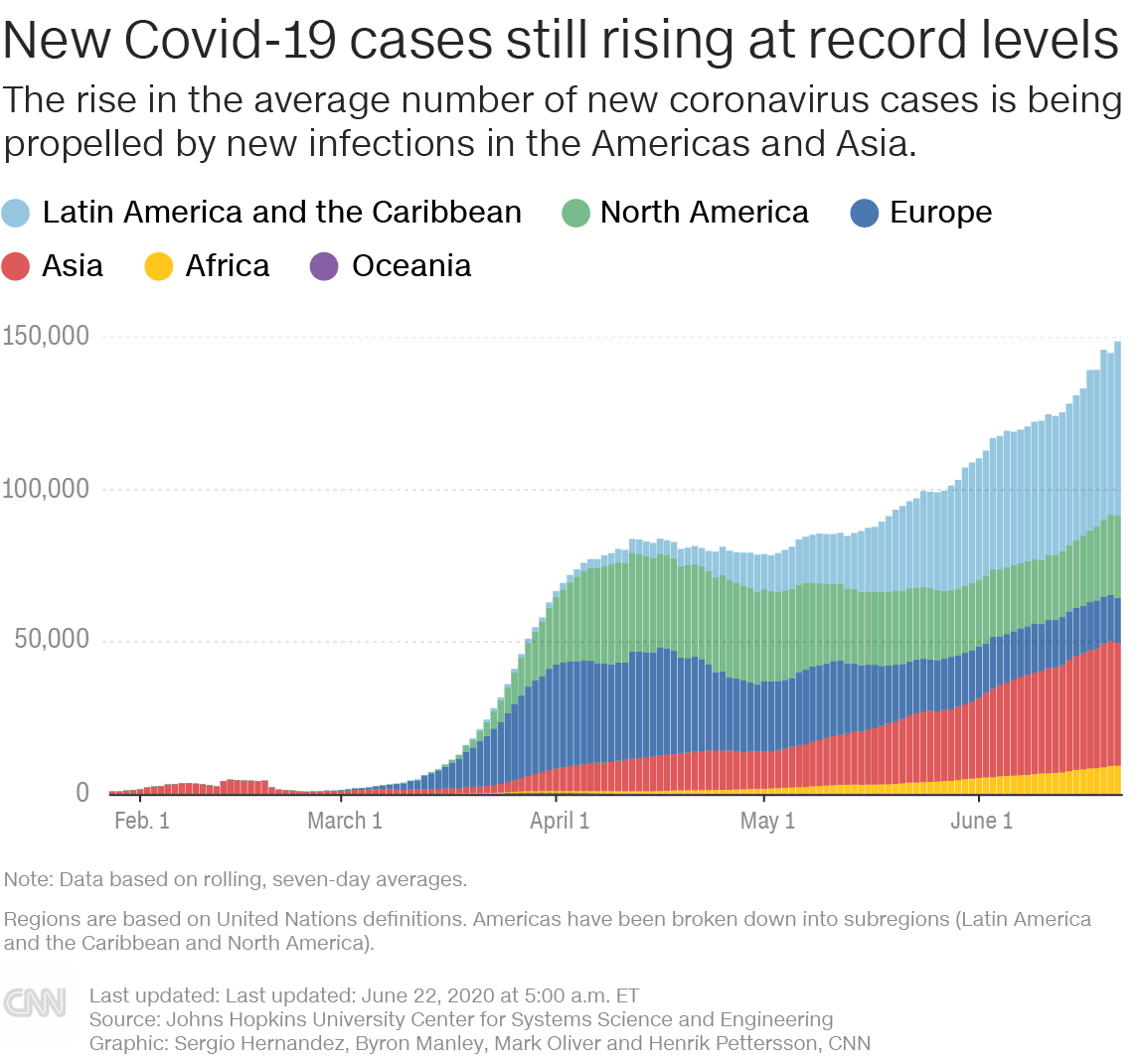 The government-run shelter is located in Kanpur district in the northern Indian state of Uttar Pradesh and housed 170 girls.

All of those who tested positive have been admitted into hospitals, while others, including the staff, have been placed under quarantine, according to Poonam Kapoor, a member of the state's Women's Commission.

Five of the girls who tested positive for the virus were also found to be pregnant, according to Kapoor. The pregnant girls were brought into the shelter home as they were related to cases involving sexual offenses, the chief of the Kanpur district, Brahma Deo Ram Tiwari, said at a press briefing on Sunday.

The Government of National Capital Of Delhi Health Branch issued the order, which has been seen by CNN, on June 19.

In the future, "leave of any kind to staff may only be granted under most compelling circumstances," according to the state authority's order.

Dr. Zeke Emanuel, who was a health care adviser to President Barack Obama and is currently an adviser to Joe Biden’s presidential campaign, says he spoke with President Trump in February about the White House’s response to Covid-19.

The one small task force that was created at the White House “was totally inadequate,” Emanuel told Dr. Sanjay Gupta during a taping of Gupta’s CNN podcast, “Coronavirus: Fact vs. Fiction.”

Masks should not be up for debate: Emanuel also said that wearing masks should not be contentious. “Closing down businesses – it's clear what the cost is. Wearing a mask – there's no cost. And I think we got it wrong,” he said.

“The public health and the economics are intimately related,” Emanuel said. “You cannot solve one without solving the other. And I do think that's critical – understanding it. And I know that the Biden campaign understands that. I don't think the current administration wants to believe that.”

Emanuel, who is an oncologist, compared the government’s Covid-19 response to cancer treatments, saying the United States should have imposed a more stringent lockdown for a shorter period of time.

“We dribbled it out, and dribbling it out is both prolonging it and making it much less effective in terms of bringing the cases and the total number of deaths down,” he said.

Jackson Health System has seen a 75% increase in coronavirus patients in the past 13 days, according to data posted by the hospital system on Twitter. On June 8, Jackson Health reported 104 Covid-19 patients. Sunday, they reported 182.

Florida sees jump in cases: In the US, cases are spiking in states such as Florida and Arizona, even as the nation continues to reopen.

The Florida Department of Health reported 3,494 new cases of coronavirus on Sunday bringing the state total to 97,291 according to data released by the state.

On Saturday, one day prior, reported cases were the highest for a single day in the state with 4,049, according to to the Florida Department of Health.

Florida Gov. Ron DeSantis said Saturday that cases are "shifting in a radical direction" toward populations in their 20s and 30s.