New Zealand has reported two new cases of novel coronavirus, bringing the total number of active cases in the country to nine, the country's Ministry of Health said Monday.

The two people who tested positive -- a female teenager who traveled from Islamabad on June 13 and a man who arrived from India on June 15 -- arrived in the country on repatriation flights.

Both individuals are currently in quarantine at Jet Park Hotel in Auckland. All people entering New Zealand and must stay in managed isolation or quarantine for at least 14 days and test negative until they are allowed to move around freely.

Imported cases under scrutiny: Last week, New Zealand reported its first coronavirus cases in more than three weeks after two women who traveled to the country from the UK were found to have Covid-19.

On Monday, India recorded more than 12,000 daily new coronavirus cases for the fifth consecutive day with its second-highest daily jump in the number of coronavirus-related deaths in a 24-hour span – up by 445 to 13,699, according to the ministry.

The novel coronavirus has infected nearly 9 million people worldwide and killed at least 468,000, according to Johns Hopkins University. If you're just joining us now, here are the latest developments:

China has suspended poultry imports from a Tyson Foods plant in the United States because of concerns about an outbreak of coronavirus at the facility.

The country's General Administration of Customs on Sunday said that Tyson confirmed a "cluster of Covid-19 infections among employees recently" at the plant, which it identified only by a registration number.

Asked for comment, Tyson did not say which plant the Chinese government was referring to -- though the company told other media outlets that the announcement pertained to a plant on Berry Street in Springdale, Arkansas. The US Department of Agriculture has also used the same number to refer to a poultry plant at that location.

Tyson did not immediately respond to a request for further details.

The US company announced Friday that 481 of its workers recently tested positive for coronavirus at locations in Arkansas, nearly half of whom were at the Springdale plant. More than 3,700 people were tested in total, and all but 26 of the people who tested positive had no symptoms. 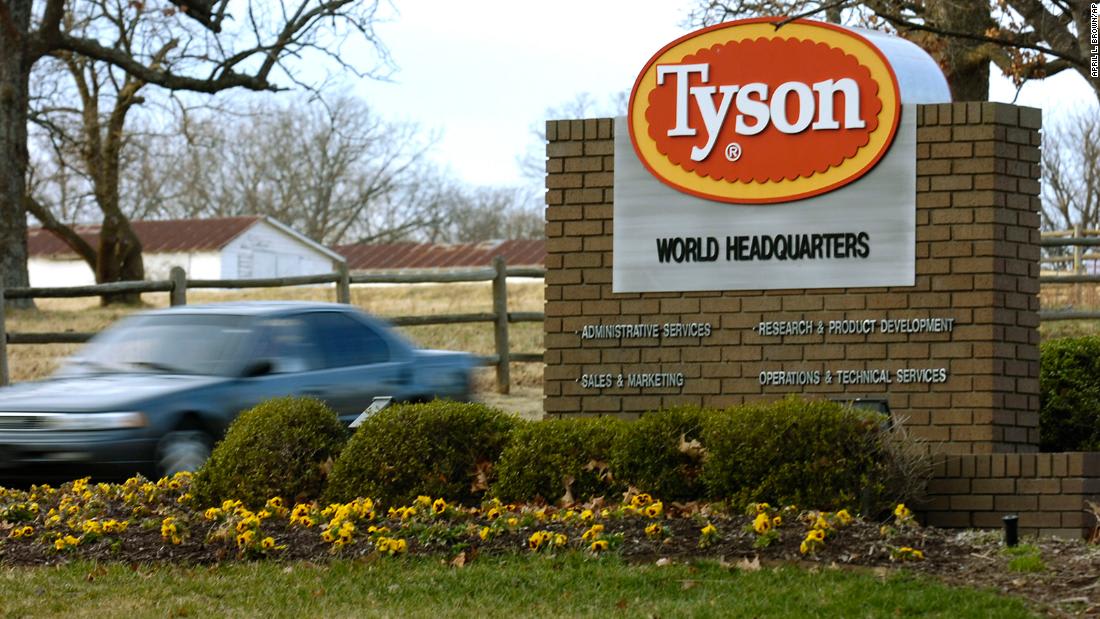 The cases include 35 airmen belonging to an unspecified unit at the airbase, and two service members who were deployed to assist with the local medical response, he said.

Boswell added that the first airman began showing symptoms of the coronavirus on June 11, and all airmen are currently undergoing quarantine.

It is unclear if the members contracted COVID-19 while on Guam or prior to arriving at Guam. We have been in constant contact with the governor and her staff and working in connection with the Guam Department of Public Health and Social Services to deal with this issue as a team," he said.

Boswell added that "preliminary evidence" has shown that some service members may not have adhered to public health directives, and promised to launch an investigation into the matter.

"If the ensuing investigation determines that members did not follow directives manner in a disciplined manner, I can assure you they will be held accountable for their actions under uniform code of military justice," he added.

Marisa Bello always dreamed of getting married under the stars, and she wasn't about to let a global pandemic stop her.

So back in March, when her home state of Nevada started shutting down to minimize the effects of the coronavirus outbreak, she and her fiance, Luis, made plans to drive across the state line into Utah and elope.

They got married on April 3, and the Bellos set up a laptop camera to stream the wedding online so friends and family could follow along.

There were vows. There was dancing. There were tears. And, yes, it all unfolded under the stars.

"It wasn't exactly how we imagined it, but it was intimate and wonderful anyway," said Marisa Bello, a school principal who lives in Las Vegas. "Since we couldn't celebrate with everyone in real life, we just wanted to do something that would bring love into everybody's living room."

The Bellos aren't the only couple to pivot to a virtual wedding since the pandemic began. Across the country, a growing number of lovebirds are deciding to get married now. 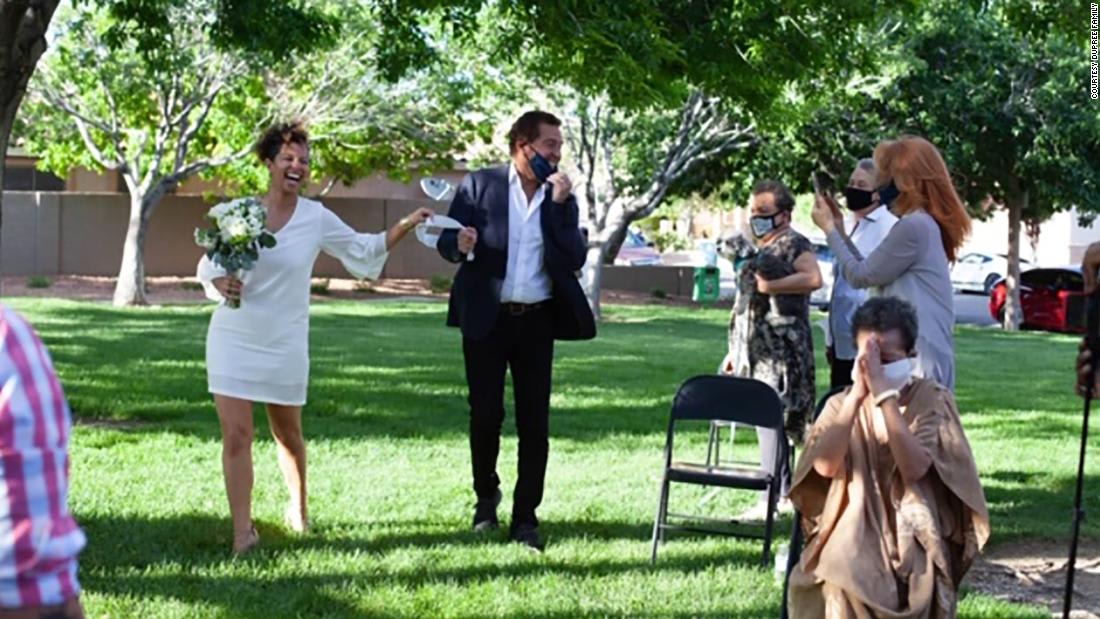 Virtual weddings done right by couples undeterred by the pandemic

Chinese authorities on Monday warned against any actions or words that used the virus to "stigmatize" countries.

This comes after US President Donald Trump called Covid-19 the “kung flu” during a campaign rally on Saturday. Trump has also previously called the virus “the Chinese plague” due to its origin in the Chinese city of Wuhan.

“China also firmly opposes any words or actions that try to use the origins of the coronavirus to stigmatize any country,” said Zhao Lijian, a spokesperson for China’s Foreign Ministry, in response to a question about Trump's remark.

Zhao added that the World Health Organization and the international community are “explicitly opposed to linking virus to any specific country or region.”

The Australian state of Victoria has confirmed 16 new cases of the coronavirus, according to Victoria’s Department of Health and Human Services.

“We’ve had more than 120 new cases in the past seven days, and the main cause for this increase has been through cases in families,” said Victoria Chief Health Officer Professor Brett Sutton.

“People have not followed our advice around physical distancing, hygiene, and limiting the number of people you invite in your home,” he added.

Extended restrictions: In response to the rise in cases, the Victorian government announced on Sunday that it will extend its state of emergency for at least four more weeks.

Under the emergency order, the number of visitors allowed inside a home will be reduced to five and public gatherings will be limited to groups of 10.

Restaurants, pubs, gyms, cinemas, and places of worship will allow up to 20 people at a time, until July 12.

“We would recommend people not at this stage travel to Melbourne unless they have to,” she said.

On Tuesday, US President Donald Trump is heading to Arizona, where a spike in coronavirus cases has raised alarm and prompted new rules.

Trump will speak to student supporters in Phoenix, where the city council and mayor have made face masks mandatory for people inside a building less than six feet away from others.

Phoenix Mayor Kate Gallego told CNN that she hopes everyone attending the event will wear a mask -- including the President, who has previously claimed that masks don't do much in battling the virus, in direct contradiction to health experts.

“It is not safe right now to have any large events, whether it be the President of the United States or large indoor sporting event,” Gallego said.

On June 7, the state reported 26,989 total cases, according to Johns Hopkins University.

There have been 1,339 coronavirus-related deaths in the state since the start of the pandemic, according to Arizona's health website.

Across the American South, officials are raising alarm about an increased number of younger people testing positive for the novel coronavirus.

In North Carolina, a rise in cases is primarily among the younger population aged 25-49, said Gov. Roy Cooper on Friday.

In Texas, the governor said last week people under 30 made up a majority of new coronavirus cases in several counties. He said that increase in young infected people could be related to Memorial Day parties, visits to bars or other gatherings.

And in Florida, Gov. Ron DeSantis said Saturday cases are "shifting in a radical direction" toward populations in their 20s and 30s.

Those younger groups, he said, are mostly asymptomatic and don't require clinical attention.