As Covid-19 cases rise among young people in the United States, there has been debate around whether a natural herd immunity may emerge since the nation doesn't have a vaccine yet — but scientist and author William Haseltine said on Tuesday that the coronavirus can be complex.

"I call this virus the 'get it and then your body forgets it.' This is not a standard virus that you're going to get herd immunity. There is no evidence of herd immunity for coronaviruses. It does not exist," Haseltine told Alisyn Camerota during an appearance on CNN’s New Day.

He continued: "Every year, the same four coronaviruses come back to give us colds. ... If you have one of those coronaviruses, it can cause the exact same disease a year later," Haseltine said." We now know from studies that you can just watch immunity fade over a two-month period. It doesn't disappear, but it fades in that short of period. So, there isn't such a thing as herd immunity. It's a fantasy. It happens for some viruses. It doesn't look like it's going to happen for this one."

No state has effectively transitioned from lockdown "to a public health model of testing, tracking, isolating and quarantining" during the Covid-19 pandemic, said Dr. Richard Besser, former acting director of the US Centers for Disease Control and Prevention.

Speaking today on CNN’s New Day, Besser said to control the spread of the virus, states "need a public health system that's working. You need messaging lined up around that."

"In New York where they've hired thousands and thousands of contact tracers, we are hearing that there's problems – that people don't want to tell them who they had contact with," Besser explained. "I think part of that is that a lot of the social benefits in terms of income support, eviction protection, foreclosure protection, are going away – and so for somebody to go into quarantine – it could mean losing their job."

“We have to figure out how to make that transition in a successful way or every state that reopens, even those that have done a really good job at tamping this down, are going to see pretty dramatic rises and we're going to end up back to where we were,” Besser said.

Novak Djokovic, the men's world number one tennis player has tested positive for coronavirus, he announced Tuesday in a statement on his website.

The Serbian tennis star had been taking part in the Adria Tour, a mini-tennis tournament he set up to raise funds for those in need while simultaneously allowing players to get back into shape ahead of the resumption of the tennis calendar.

"I am extremely sorry for each individual case of infection. I hope that it will not complicate anyone’s health situation and that everyone will be fine. I will remain in self-isolation for the next 14 days, and repeat the test in five days,” Djokovic said.

On Sunday, Bulgarian Grigor Dimitrov, who had been taking part in the tournament, announced that he had tested positive for the virus, forcing a canceation of the final scheduled later that day.

On Monday, Croatian Borna Coric announced he too tested positive after attending the tournament.

Dr. Robert Redfield, director of the US Centers for Disease Control and Prevention, says getting a flu vaccine this year will be more important than ever.

"If there is Covid-19 and flu activity at the same time, this could place a tremendous burden on the health care system related to bed occupancy, laboratory testing needs, personal protective equipment and health care worker safety," he will say in an opening statement, prepared for his testimony today in the House Energy and Commerce Committee and posted online, Redfield says,

Redfield said the CDC is working with public health officials across the United States to increase the number of people who get the flu vaccine.

"Ongoing Covid-19 activity may affect where and how flu vaccines are given. CDC is working with manufacturers to maximize flu vaccine supply and with providers and health departments to develop contingency plans so that people can be vaccinated in a safe environment," Redfield says.

Dr. Robert Redfield, director of the US Centers for Disease Control and Prevention, is expected to testify this morning that the agency "has developed a new laboratory test that checks for three viruses at the same time, two types of influenza viruses (A and B) and SARS-CoV-2, the virus that causes Covid-19."

What this means: In his opening statement, prepared for the House Energy and Commerce Committee and posted online, Redfield said, "testing for all three viruses simultaneously will allow public health laboratories to continue surveillance for influenza while testing for Covid-19. This will save public health laboratories both time and resources, including testing materials that are in short supply."

Redfield said the single test for all three viruses will also help find co-infections, "which is important for doctors to diagnose and treat people properly."

Chinese food delivery service Ele.me said on Tuesday that it is conducting nucleic acid tests for coronavirus on all its food delivery workers in Beijing.

The company also announced their newly registered delivery drivers have to receive a nucleic acid test before they can accept orders online, as part of a series of new precautionary measures posted on the company's Weibo page. This comes the same day Beijing’s Health Commission announced that one of Ele.me’s food delivery workers tested positive for Covid-19.

About the company: Ele.me is owned by Chinese tech company Alibaba and operates across 2,000 cities in China employing more than 3 million delivery workers. Ele.me has not released any information about the size of its workforce in Beijing and how many drivers have been tested so far.

Jackson Health System is a nonprofit academic medical system. The State of Florida does not release the total number of daily Covid-19 cases in the state.

Here's some background: The major thrust of new coronavirus cases in the United States is in the South and West, where officials say more young people are ignoring social distancing measures and testing positive.

"With younger age of recent infections in at least some places such as Florida, expect a lower death rate in this wave ... until the 20-40 year olds who are infected today go on to infect others," Dr. Tom Frieden, former director of the US Centers for Disease Control and Prevention, said on Twitter Sunday.

Dr. Andrew Pastewski, head ICU physician at Jackson South Medical Center in Miami, spoke Tuesday about the surge of patients he's seeing at his hospital during an interview on CNN’s “New Day.”

A week ago we had eight patients, none on a ventilator," Pastewski said. "We were feeling like we were handling this well. We had a nice Covid floor, 24 beds with the capability of four ICU ventilators in that unit, so we thought we could use that as our Covid floor going forward.
"And within 10 days, we're now at over 40-plus patients, four on ventilators. We've had to find a second Covid unit and are looking for a third Covid unit right now."

Peru’s Health Ministry has reported the lowest daily increase since the beginning of May, with 2,511 new Covid-19 cases. The total number of cases has now topped 257,000.

The country's death toll is at least 8,223, with 174 new deaths, according to data released by the Ministry on Monday night.

Today marks 100 days since Peruvian authorities declared a state of emergency in the country in order to fight the pandemic.

In an interview with the country's Andina state news agency, Health Minister Victor Zamora said that Peru's capital Lima, which has 80% of the country’s coronavirus cases, currently shows the R level between 0.7% and 0.8% and showed optimism about the evolution of the pandemic.

“If we take in consideration the different regions in the country, the overall result is that we are going through a slow and progressive descent in the pandemic” Zamora told Andina.

Zamora acknowledged the lack of oxygen for patients is still a big challenge in the country and stated his government is buying plants to produce medical oxygen, among other emergency measures.

Gradual easing: Yesterday, shopping centers were allowed to open in Lima and other towns — with some exceptions — allowing the resumption of economic activities.

The state of emergency was initially declared on March 16 and continues until June 30. A national curfew between 9 p.m and 4 a.m local for all regions across the country was also announced on Monday, modifying previous timings per region.

If you're just joining us, here are the latest developments on the global coronavirus outbreak:

More than 9.1 million infections have been confirmed worldwide, according to Johns Hopkins University. But as some countries have not yet controlled the first wave of the pandemic, others have announced new outbreaks.

South Korea and Germany -- who initially seemed to have the virus under control -- are racing to contain newer clusters, which are threatening their relative progress at containing the pandemic.

Meanwhile in the US, cases are spiking in some states as the nation continues to reopen.

India, with the fourth highest number of coronavirus cases in the world, has seen more than 100,000 new cases in the past eight days as the country struggles to contain the virus.

In Latin America, which has seen the biggest recent increases in cases, the also situation continues to worsen.

On Monday, Mexico recorded a higher daily death count than Brazil for the second consecutive day, and Brazil, which has the second highest numbers of cases worldwide, has reported an average of 1,000 virus-related deaths a day over the past week. 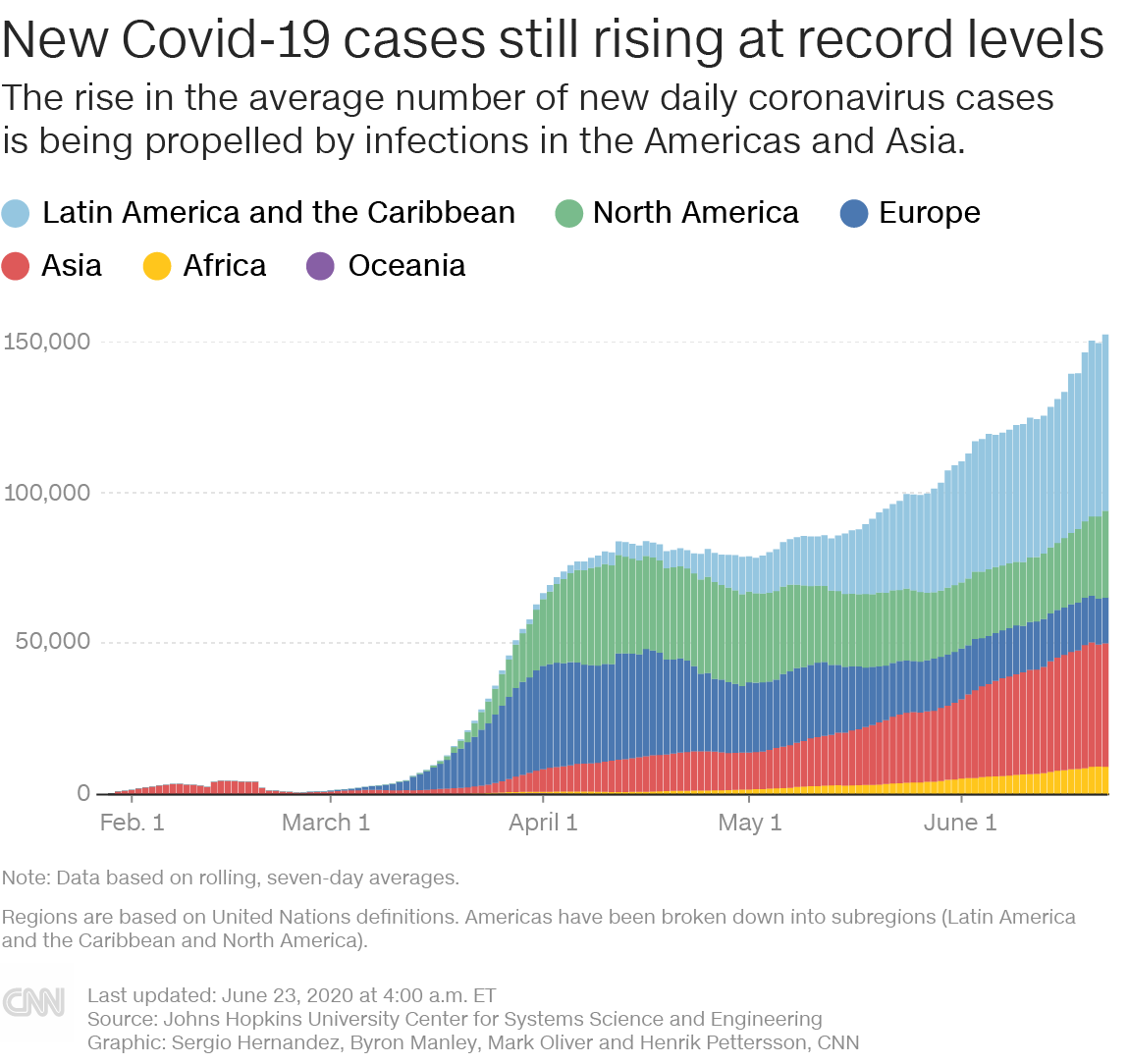 World trade dropped by nearly a fifth in second quarter: World trade fell by 18.5% in the second quarter of the year as the Covid-19 pandemic hit the global economy, the World Trade Organisation (WTO) said on Monday. The fall in trade is “the steepest on record,” but Director-General Roberto Azevêdo said it could have been “much worse.”

Germany imposes lockdown around virus-stricken meat plant: The German state of North Rhine-Westphalia has imposed a new lockdown in the area around a meat factory hit by a coronavirus outbreak.

The district where the Toennies meat processing plant is located -- and the scene of a Covid-19 cluster that has sickened some 1,553 workers -- will return to lockdown measures, the Prime Minister of North Rhine-Westfalia announced Tuesday.