Half of newly diagnosed coronavirus patients in the state say they don’t know where they may have contracted the virus, said Dr. Lisa Piercey, commissioner for the Department of Public Health.

Piercey said that indicates many of the new cases are from community spread.

She said state officials are still waiting on Tuesday’s case numbers but said they are trending up. The daily average has increased in the past two weeks, Piercey said.

The world's top ranked men's tennis player Novak Djokovic has issued another statement hours after announcing that he had tested positive for Covid-19 after competing in the Adria Tour, a tennis event that he organized.

Djokovic's new statement follows the announcement that the remaining events on the Adria Tour have been canceled.

In his new statement, Djokovic said he is sorry that the tournament caused harm.

"We believed the tournament met all health protocols and the health of our region seemed in good condition to finally unite people for philanthropic reasons. We were wrong and it was too soon. I can't express enough how sorry I am for this and every case of infection," he said.

He said tournament organizers will be sharing health resources with those who attended the events in Belgrade, Serbia, and Zadar, Croatia.

Texas Children's Hospital is admitting adult patients, according to a statement sent to CNN.

The hospital is providing "additional capacity through ICU and acute care beds across our hospital campuses to take on both pediatric and adult patients," according to a statement.

"Those adults who are Covid-19 positive will be cared for in our expanded Special Isolation Unit at Texas Children’s Hospital West Campus," according to a hospital spokesperson.

The numbers: Harris County, which includes Houston, has seen a sharp increase in the seven-day rolling average of new cases and in hospitalizations. There are more than 23,000 cases reported in the county and over 118,000 positive cases reported across Texas.

According to the state's Department of Business and Professional Regulation Secretary Halsey Beshears The Knight's Pub was in "flagrant violation" of the required social distancing guidelines set forth by the state, and had 13 of the pub's employees tested positive for the virus.

Orange County Health Officer Dr. Raul Pino tells CNN affiliate WFTV that they have linked 152 cases to the Knights Pub. "That's about 50 percent of the people who entered the bar," Pino said.

Florida Gov. Ron DeSantis said businesses failing to comply with state rules will get a visit from Beshears, whom DeSantis called “the grim reaper for business licenses.”

It is now mandatory for Florida's Palm Beach County residents to wear face masks in public.

The Palm Beach County Commission approved a motion on Tuesday to require all residents to wear face masks in public places when social distancing is not possible.

Several counties across the state including Hillsborough, Orange and Miami-Dade counties approved similar mandates in the last few days requiring the use of facial coverings while in public.

Leaders of the UK’s medical, nursing, and public health professions are urging the British government to set up a cross-party review to prepare for a second coronavirus wave, according to The British Medical Journal (BMJ) on Tuesday.

The letter calls for an urgent review, to be completed by October, which evaluates the UK's national preparedness to deal with coronavirus ahead of winter.

“As stakeholders and leaders of the UK’s medical, nursing and public health professions, we urge you to establish such a review,” the health leaders wrote. “We think there’s a strong case for an immediate assessment of national preparedness, with the first results available no later than August, and that all its work should be completed by the end of October.”

The health leaders wrote that a review should look to the future rather than attribute blame for past mistakes and should "focus on those areas of weakness where action is needed urgently to prevent further loss of life and restore the economy as fully and as quickly as possible."

“We believe that such a review is crucial and needs to happen soon if the public is to have confidence that the virus can be contained,” said the letter.

The letter added, “We don’t underestimate the complexities of establishing this in the required timeframe. We stand by ready to help in whatever way we can.”

President Trump is visiting Arizona today, despite ongoing concerns about an uptick in coronavirus cases in the state.

Arizona is seeing a rise in new reported cases compared to the previous week, according to John Hopkins University data. Arizona is reporting 3,591 new cases of Covid-19 as well as 42 deaths from the disease over the last 24 hours, state data shows.

Today’s numbers are a new record high for both new daily cases and deaths since the state started posting data publicly in mid-March.

Arizona is also reporting that it conducted 15,940 new tests for the infection in the last 24 hours.

The state has been battling a surge in Covid-19 cases and had nine days in the last two weeks where there were more than 1,500 new cases being reported by Arizona’s Department of Health Services.

The state has also been reporting that more than 80% of its available intensive care hospital beds have been in use since last week.

Last Wednesday, Gov. Doug Ducey announced that the state would allow local communities to require masks in public if they choose, but would not issue a statewide order.

“We knew that when we lifted the stay-at-home order, we would have an increase in cases,” Ducey said yesterday afternoon. “The objective has always been that we could slow the virus.” 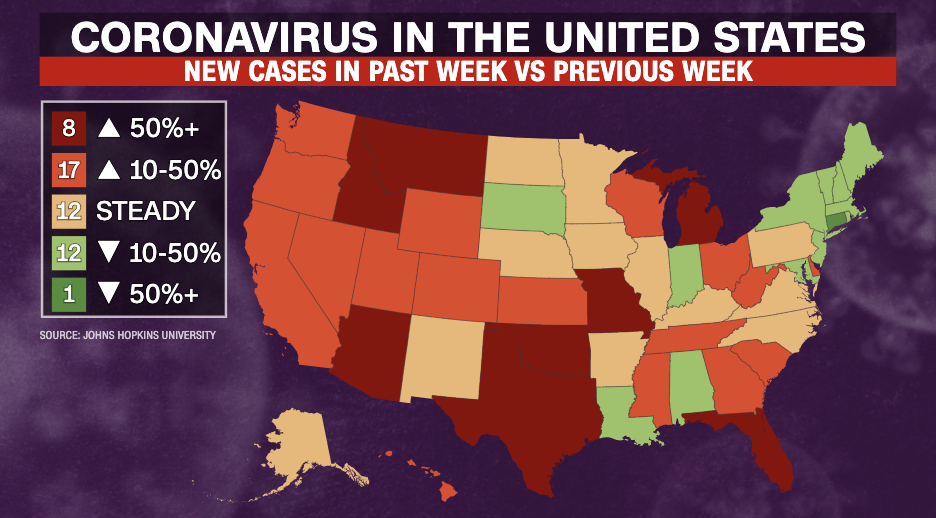 The coronavirus pandemic is more likely to lead to a baby bust in the United States rather than a baby boom, possibly leaving the nation with about half a million fewer births than otherwise would be expected, experts at the Brookings Institution and nonprofit March of Dimes predict.

Researchers at Brookings in Washington, DC examined data from previous economic studies on fertility in the United States during the recession of 2007-2009 and the 1918 influenza pandemic. After analyzing that data, along with other factors such as job losses during the coronavirus pandemic, the researchers predicted in a report published last week that the United States could see a drop of around 300,000 to 500,000 births due to Covid-19.

Dr. Rahul Gupta, chief medical and health officer at March of Dimes in New York, told CNN on Monday that he and his colleagues have come to a similar conclusion.

"The economic and demographic implications that stem from a severe drop in pregnancies could have a tremendous impact on the next generation, which is why this is an important and very serious issue."

The Brookings team also found that in 1918, each spike in deaths due to the flu pandemic led an otherwise steady birth rate to fall roughly 21 births per 1,000 -- representing a 12.5% decline.

They also noted that the uncertainty and anxiety associated with the coronavirus pandemic, job losses and to some extent physical distancing, could play a role in a further decline of births. This is something that Gupta, a specialist in internal medicine and preventive medicine, said he has seen among his own patients.

"As I see my patients, I see more and more demands on family planning and contraceptives and other things, coupled with the economic forces and people losing their jobs," Gupta said, adding that the lives of many of his patients changed drastically, as they not only had to work from home but their home lives became hectic with their children having to stay home too.

This new research has some limitations, including that the findings are based on comparisons with two previous events and might not reflect the real nuances of the current coronavirus pandemic. "Some of these estimates are also dependent on what happens next," Gupta said.

"For example, the fear factor could be addressed with a robust plan and call to action that prevents a second wave of Covid infections this fall. On the other hand, if you do get several waves like we saw in 1918, the situation could be even worse," Gupta said. "This pandemic and our response to it and the trust of the public in its government could have a consequential, long-term impact."

New Jersey has seen an increase in the percentage of people testing positive for Covid-19 between the ages of 18 and 29, state Health Commissioner Judy Persichilli said Tuesday.

In April that age group represented 12% of the state’s cases. This month they represent 22% of the cases.

Persichilli noted that while some of the increase can be attributed to increased testing, the trend was still concerning, and especially in light of the videos of large gatherings over the weekend along the Jersey Shore and at a bar in northern New Jersey.