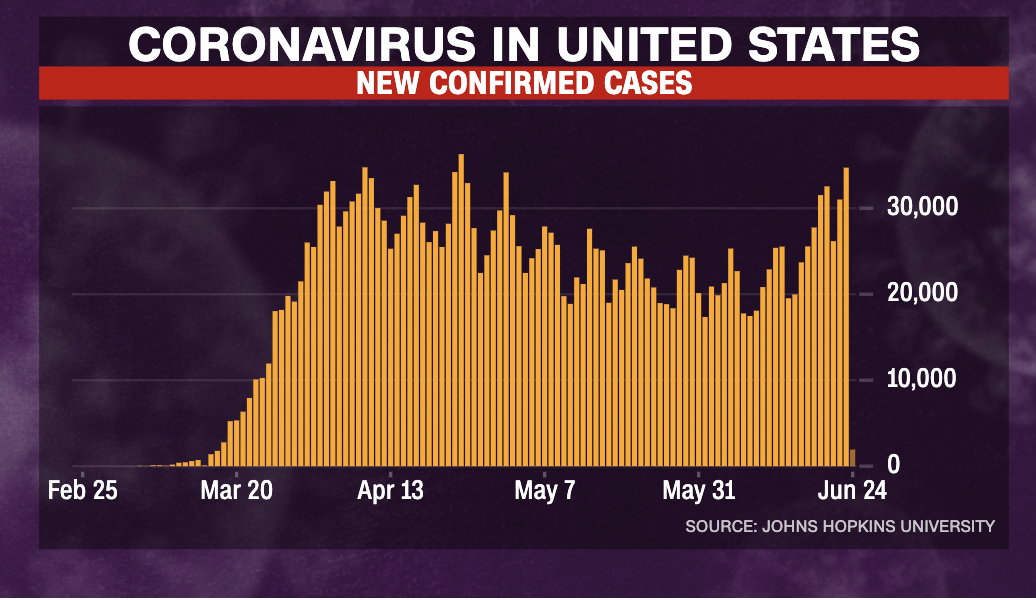 This is based on the archive of numbers kept by Johns Hopkins University.

The highest number of new cases was reported on April 24, when at least 36,291 were recorded.

The World Health Organization expects the world will reach 10 million coronavirus cases within the next week.

He continued: “We expect to reach a total of 10 million cases within the next week. This is a sober reminder that even as we continue research into vaccines and therapeutics, we have an urgent responsibility to do everything we can with the tools we have now to suppress transmission and save lives.”

“Now the proof is in the pudding because we’re seeing it all across the board. What New York is doing is counter to what you see across the nation. They are going up and we are going down,” Cuomo said, citing state statistics including a 1.1% positive rate.

There were 17 deaths Tuesday – 12 in hospitals and five in nursing homes in New York. That’s down from 27 the day before. There are 1,071 patients hospitalized, the lowest level New York has had since March 19, according to Cuomo.

New York City is at 1.2%. Within the city itself, the Bronx is at 2.1 percent, the highest of all five boroughs. That’s an increase from 1.3 percent on Friday.

Five regions across the state are expected to enter phase four by Friday. Indoor religious gatherings will be permitted in those regions with a capacity of 33% occupancy, a slight uptick from 25% currently.

Museums, higher education, professional sports can resume — all with limitations.

New York City, which began phase two earlier this week, is not among these regions nor is Long Island.

Iraq on Wednesday registered 2,200 new coronavirus cases, the highest daily tally recorded in the country since the pandemic began, according to the country's health ministry. Iraq now has a total of 36,702 cases of coronavirus.

The health ministry also reported 79 new Covid-19-related fatalities, bringing the total to 1,330 deaths across the country.

“We just went through hell trying to revive and take care of people and we don't want to go through it again,” FDNY EMS Lt. Almojera told CNN's Poppy Harlow.

Almojera also underlined the strain that Covid-19 has put on first responders.

“You felt every bit of that energy, and it took all of it out of you as a responder. To sit there and go into home after home trying to revive these people and console them; you know I always thought I had an unlimited amount of empathy. You know, as a paramedic, you have to have some of that, you think you have that. And Covid put that to the test. There is a limit," he said.

Almojera noted EMT workers have not just died from the coronavirus, bu he worries that the pandemic has also had mental health repercussions for first responders.

Two EMTs in New York have already committed suicide and others have expressed the desire to do so, he said.

“He's a mayor that preaches equality,” Almojera said. “We’re 54% minority, we're 38% women, we're the most diverse 911 workforce. You would think somebody who would preach equality and see the work that we do as a 911 service, with just the same dangers as the other two, would equalize us. That would be an easy win for him. It's the stroke of a pen.”

“He can fix it tomorrow if he wanted to,” Almojera adds, saying that his EMT members come from the same minority communities that are adversely affected during the pandemic.

“The members I represent live in those communities. We live in East New York, Brooklyn and the Bronx and uptown and in Queens. We live here. We don't have the funds to buy a house in other places," he said.

The 24-hour total is nearly double the previous high of 42 deaths in one day reported yesterday.

The record-breaking statistic comes on the heels of yesterday’s record high for new daily cases of the disease as well.

However, the state’s health agency does note that, since federal health officials have updated guidance for identifying Covid-19 deaths, the change “may cause the number of new deaths reported on our dashboard to increase more than expected for a few days.”

Arizona now says 88% of its ICU beds and 86% of its inpatient hospital beds are now in use as the state battles a surge in Covid-19 cases. Both are record highs since the state started reporting the statistics in late March.

Arizona’s Gov. Doug Ducey has said that he would not order a state-wide mask mandate. More than a dozen cities across the state, including Phoenix, the state’s largest city, have ordered residents to wear masks.

However, it is unclear how or if these orders are being enforced.

Phoenix’s mayor Kate Gallego, noted that “the goal of this policy is not to hand out citations,” in a statement released Monday. Phoenix Police also told CNN that they will “continue to lead with education” in a statement yesterday.

Following his announcement that New York will institute a 14-day quarantine alongside New Jersey and Connecticut for travelers from states with high Covid-19 rates, Gov. Andrew Cuomo said the state's latest coronavirus deaths are about "as low as it's ever been" and he called the figures "great news."

The state reported 17 deaths yesterday, down from 27 reported on Monday.

The governor stressed that the state does not want to see these "numbers reverse."

"This is right about where the lowest numbers have ever been and again, that's more great news and again, we don't want to see these numbers reverse. The numbers of lives lost under three day average, again, is just about as low as it's ever been. All of the numbers are good. What we're doing works," Cuomo said.

He added that the state's approach to reopening following data "has been vindicated."

New York Gov. Andrew Cuomo said any state that has a 10 people per 100,000 testing positive for coronavirus — or a 10% infection rate — will be subject to the newly imposed quarantine.

The numbers, which are on a seven-day rolling average, will be updated daily, so the states impacted could change day-to-day.

Today, there are nine states that meet the criteria for the 14-day quarantine. They are:

New Jersey Gov. Phil Murphy said at a joint news conference today with the governors of New York and Connecticut, that the people in their states have been "through hell and back" with the coronavirus.

Murphy's comments came after New York Gov. Andrew Cuomo announced a joint decision by the three states to institute a travel advisory that will require travelers to CT, NY, and NJ from states with high infection rates to quarantine for 14 days.

"No region in the country has paid a bigger price with the loss of brothers and sisters. We've lost just under 13,000 members of our New Jersey family, New Yorkers paid an enormous price. Connecticut has paid a big price," he said.

He said that the governors "need to do things right" for "our respective states" and institute this travel advisory.

Connecticut Gov. Ned Lamont echoed Murphy's comments, adding, we “reluctantly came to the conclusion that this is what we've got to do to make sure that our regions stay safe and our states stay safe as we make sure that we can safely get our businesses back and our schools back up and operating this fall and we'll be monitoring this carefully.”