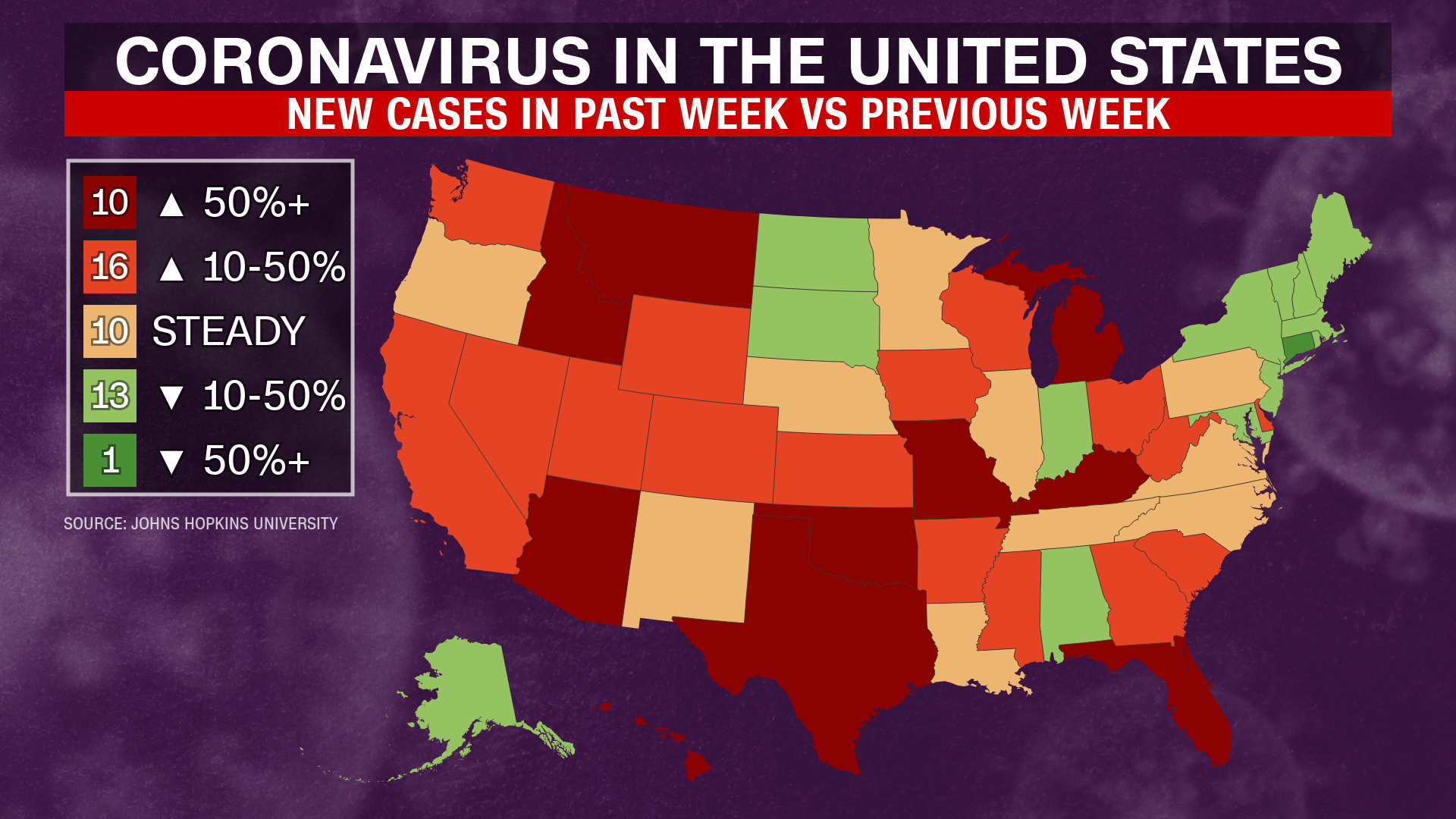 The criteria European Union nations could use to block visitors from countries with severe coronavirus outbreaks – including the United States – visiting Europe has been “hiding in plain sight” since the middle of June when the guidelines were published, says an EU official.

European countries are currently working through a checklist of criteria based on the health situation and reciprocal travel arrangements in an external country that would create a list of countries whose visitors might be considered safe to visit from July 1.

The guidelines have, “absolutely nothing to do with political decisions, this is based on the current health situation in a third country,” said the official.

When asked whether the executive order signed by President Trump this week that freezes visas for foreign workers was a factor, the official added, “I know some media have said for instance the executive order the United States President signed is part of this decision; it could not be further from the situation."

The June guidelines: When asked if the US was on a list of origin countries that might be barred from travel to Europe, one EU diplomat directed CNN to the first point of a June 11 checklist published by the European Commission on what to consider when allowing travelers into the EU.

The first point on the checklist asks whether the country can "be considered as being in a comparable or better epidemiological situation as the average in the EU+ area" with regard to number of new infections, trend of new infections and response in areas such as testing, surveillance, contact tracing, containment, treatment and reporting.

The latest US numbers: The US has the highest number of coronavirus deaths and infections in the world.

As of late Tuesday in the US, at least 2,346,937 had been infected in the country and 121,224 had died, according to the Johns Hopkins University Coronavirus Resource Center.

Tourism accounts for 10% of Europe’s GDP. "We are keen, and member states are keen for Europe to be open for tourism for jobs," said the official.

Ambassadors are set to meet again today and Friday to discuss the next steps in the process.

Recommendations made by the European Commission are not mandatory — decisions on whether and how to open up borders are matters for individual states.

Details regarding the UK’s international travel agreements -- or so-called "air bridges" -- will be announced by next Monday, according to Transport Secretary Grant Shapps.

Speaking to the UK Parliament Transport Committee Wednesday, Shapps confirmed that “discussions were ongoing” and details on the measures would be announced to Parliament by June 29.

Air bridge agreements would allow UK travelers to visit certain European countries without having to quarantine on return.

Shapps said Britain wanted to put in place a system where the country avoided reinfection due to citizens going abroad or visitors from other countries entering the UK.

He added that the current quarantine measures were helping in “serving that purpose." Those measures require all international arrivals not covered by a shortlist of exemptions to self-isolate for two weeks.

When deciding which nations to form agreements with Shapps said he would consider “not only what the level of disease is" but also the trajectory of the virus in a country.

Shapps said he would also consider whether a country has the same testing capability as the UK, saying that the NHS Test and Trace system had “the capacity to test actually far more than is immediately required”.

He added that he would take into account the social distancing measures in place in other countries, noting that there were “evidently a lot of complexities” to consider.

Shapps refused to give any further detail on air bridges until the official announcement saying he didn’t want to give people “false hope."

The novel coronavirus has infected more than 9.2 million people worldwide and caused more than 477,000 deaths. Here's what you need to know about the outbreak today:

President Donald Trump's top health advisers say that the coronavirus pandemic has driven America to its knees amid a disturbing surge in cases. But Trump is ignoring the new danger, instead using the worst domestic crisis in decades as a racist punchline.

Political mismanagement of the situation, the glaring lack of a national strategy and the nation's exhausting, inconclusive struggle with the coronavirus was reflected Tuesday in three key developments.

Fully half of US states are now seeing rising cases of the disease with the situation especially acute in Texas, Florida and Arizona, which embraced aggressive reopening programs.

The European Union, which has been more successful than the US in suppressing Covid-19, warned it might bar visitors from America in what would be a major embarrassment for Trump. And the President persisted with his counter-logical argument that the US is only seeing more cases of the virus because it is doing more testing, leaving the implication that it would be better if rising cases, infections and ultimately deaths were simply ignored.

Trump spent the day in Arizona and held a rally in Phoenix, a city where mask wearing is mandatory in public. But he refused to don a face covering, along with many supporters who attended his indoor event. And he delighted his fans by reciting a racist name for the virus referencing its origin in China.

Authorities in Delhi have drafted the Indian Armed Forces to support the treatment of coronavirus patients at makeshift railway carriage treatment centers.

Around 8,000 new hospital beds have been installed inside railway coaches in makeshift "Covid care centers" in the city, set up to deal with the deluge of infections hitting India's capital.

Armed Forces personnel have been detailed for providing medical care and attention to Covid patients housed in the railway coaches in Delhi," Amit Shah, Union Home Minister, said in a statement.

Military personnel will operate the facilities -- Delhi's Chief Minister, Arvind Kejriwal, had called for the deployment of doctors and nurses from the Army and the Indo-Tibetan Border Police to work at the centers.

Shah said in a press release on Tuesday that another facility, with 1,000 beds and an area with intensive care facilities, would be up and running in the next 10 days. Armed forces personnel will also run that facility.

India reported 15,968 new coronavirus cases on Wednesday -- the highest single-day jump so far, bringing the total number of cases in the country to 456,183, according to its health ministry.

On Tuesday, the Indian Council of Medical Research said that over 7.1 million coronavirus tests had been conducted across the country since the pandemic began.

Germany is back in crisis mode.

The country is trying to stop a new coronavirus outbreak from turning into a full-blown second wave of infections, after hundreds of people working at a meat processing plant in the western state of North-Rhine Westphalia became ill. It's a serious situation, but the German government isn't rushing to reintroduce the kind of strict nationwide lockdown measures it used to fight the virus earlier this year.

Instead, public health officials are hoping they will be able to contain the outbreak by introducing more nuanced local measures and going all in on testing and contact tracing. Their approach echoes similar tales from elsewhere.

It's a glimpse at what the new normal might look like -- a perpetual game of whack-a-mole in which authorities race to contain the virus as it pops up in new places.