New York City is on track to enter into phase 3 of reopening on July 6, according to Mayor Bill de Blasio.

“We will work closely with state of New York to make final decision,” de Blasio said

The city will have more guidance tomorrow on what businesses can reopen during phase 3, the mayor said.

At least 29 states are seeing new coronavirus cases increase compared with the prior week. That includes the nation's three most populous states: California, Texas and Florida.

There is only one state in the US right now that is reporting at least 50% decrease in new coronavirus cases: Connecticut. 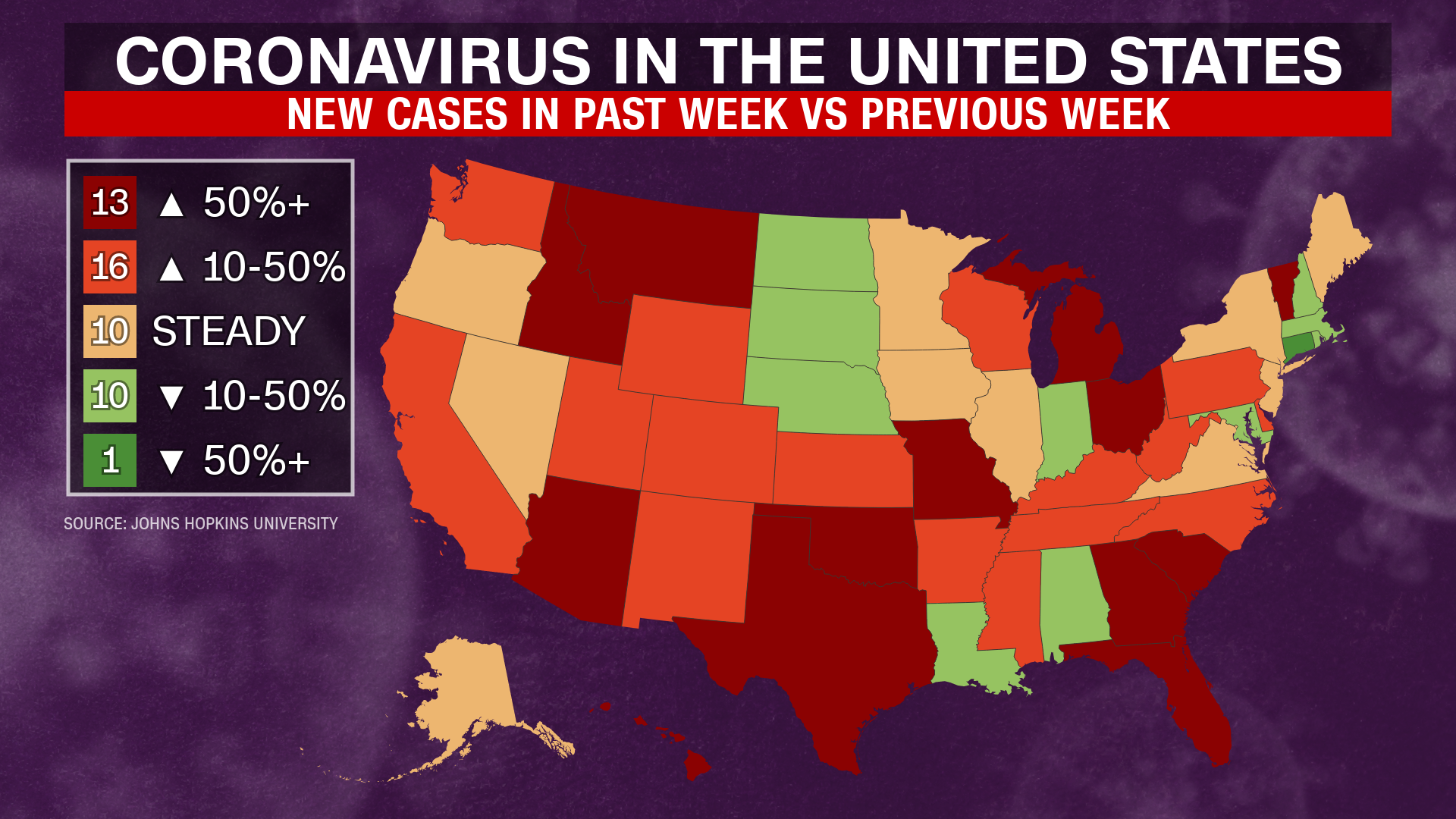 Now is the time to normalize the use of masks and practice social distancing to get us prepared for a possible second wave of Covid-19, said Dr. William Schaffner, professor of infectious diseases at Vanderbilt University and a longtime adviser to the US Centers for Disease Control and Prevention.

"The time to normalize wearing masks and social distancing behavior is now, so that we get used to it by the time the fall arrives. And I'm very concerned that the second wave this fall will be substantially greater than what we have experienced so far," Schaffner said Thursday during an appearance on "CNN Newsroom."

Schaffner added that all sectors of society should model this behavior: politicians, religious leaders and businesses.

"You have to make wearing masks a social norm. Every business has to have a sign outside their door that says, 'If you wish to patronize us, please come in with a mask. If you haven't got one, we'll give you one.' And then everybody who works in the business has to wear it. Religious leaders have to preach that to all faiths, all the time. We need chambers of commerce coming out; local political leaders; all harmonizing with that message to normalize that behavior in our society. And on occasion, you may indeed have to mandate it," Schaffner said.

The International Monetary Fund has slashed its global economic forecasts for 2020, saying the coronavirus pandemic is causing a much steeper recession and a slower recovery than initially expected.

The organization said Wednesday that it thinks global GDP will contract by 4.9% this year, downgrading its estimate from April, when output was forecast to shrink by 3%.

That was already due to be the deepest slump since the Great Depression of the 1930s.

The pandemic is causing an "unprecedented decline in global activity," according to the IMF. It said the global labor market has taken a "catastrophic" hit, movement outside the home remains depressed, companies have cut back on investment and consumer spending has dropped significantly.

"The Covid-19 pandemic has had a more negative impact on activity in the first half of 2020 than anticipated, and the recovery is projected to be more gradual than previously forecast," the IMF said in its report.

Here is the IMF's world economic forecast by country for June: 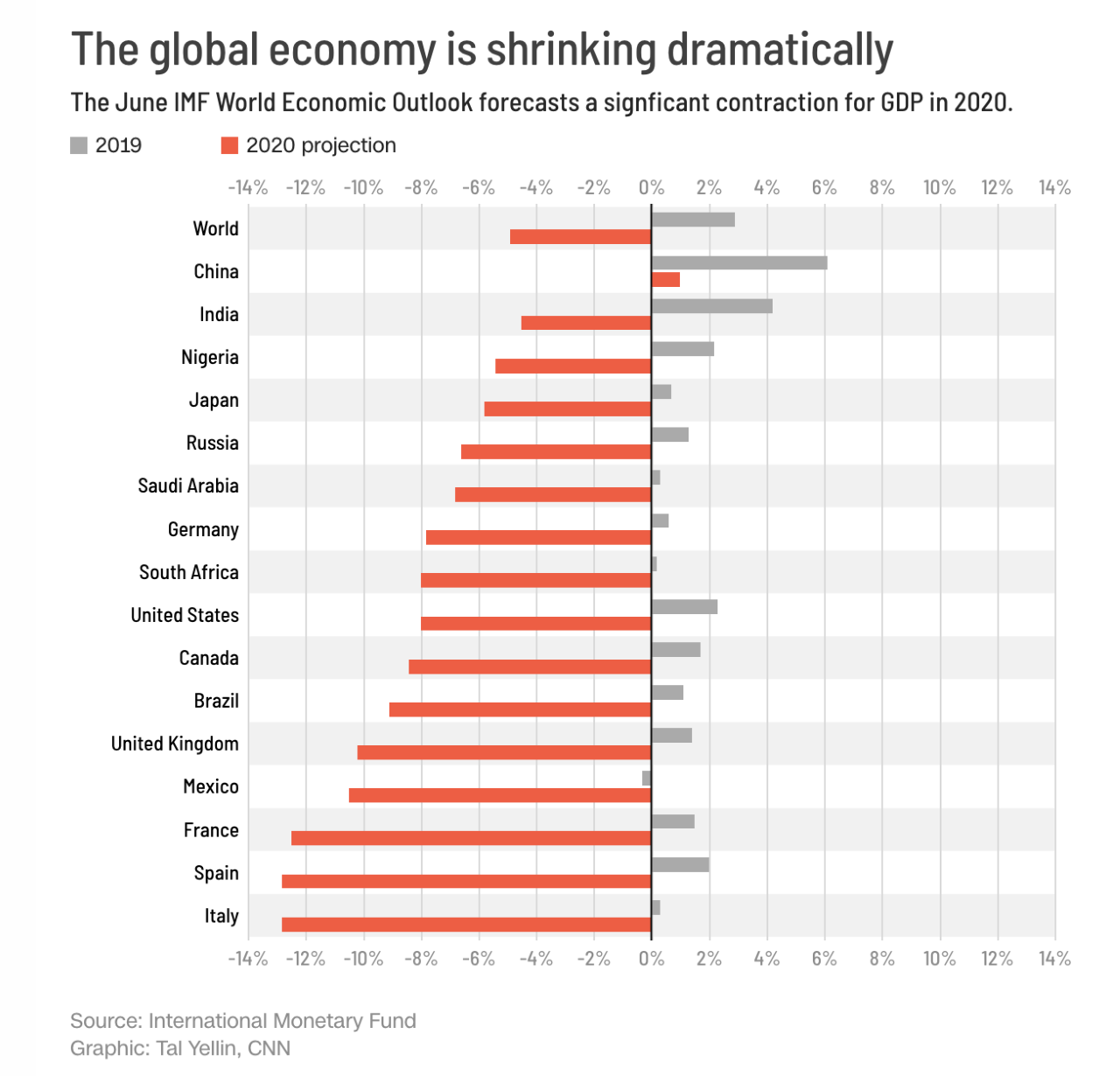 The outlook is slightly rosier than those provided by the World Bank and the Organization for Economic Cooperation and Development, which have recently forecast that global GDP would shrink by 5.2% and 6%, respectively, before rebounding in 2021.

But the IMF warned of a "higher-than-usual degree of uncertainty" around its forecast, which it said was based on a number of assumptions, including stable financial conditions.

White House Economic adviser Larry Kudlow, when asked about the increase in coronavirus cases across the country and its economic impact, said Thursday that “there will be some shutdowns in individual places or certain stores,” but that he believes the country as a whole will not shutdown again.

He said that while the US has seen an increase in cases nationally of “just a little bit,” multiple states have seen a decrease in cases.

However, data shows, coronavirus cases continue to surge in the U.S. as some states are reporting record numbers, including the country's three most populous states.

Kudlow was also pleased the new jobless claims were down for the 12th straight week, and said he still believes the economy will have a strong V shaped recovery.

Conditions in the US labor market are undoubtedly improving, but as CNN's business team noted this morning the road to recovery is long and littered with obstacles.

Kudlow said he believes the unemployment rate could fall below 10% by year end.

US stocks kicked off in the red on Thursday, adding onto losses from the prior session.

Wednesday had been the worst day for stocks in nearly two weeks following worries of rising Covid-19 infections, quarantine requirements for intra-US travel and proposed tariffs on European imports.

Data from the Labor Department showed Friday that more people than expected – 1.5 million – filed for first-time jobless benefits last week. The weekly claims have declined for three months now but are still higher than they have ever been before the pandemic.

Here's how the markets opened today:

Macy’s announced a restructuring plan Thursday that will eliminate 3,900 corporate and management jobs as the coronavirus pandemic continues to hurt sales.

The department store chain says it expects the layoffs will save the company about $630 million per year. The company is trying to cut costs as “the business recovers from the impact of the Covid-19 pandemic.”

“Covid-19 has significantly impacted our business," said Macy's CEO said Jeff Gennette. "While the reopening of our stores is going well, we do anticipate a gradual recovery of business, and we are taking action to align our cost base with our anticipated lower sale.”

Macy's will also reduce staffing across its stores, supply chain and customer support network. In February, Macy’s said it was cutting 2,000 jobs and planned to close 125 underperforming stores over the next 3 years.

A new forecast from the American Automobile Association says Americans will take 700 million trips this summer, but that number is down nearly 15%, the first decline in more than a decade as the Covid-19 pandemic continues.

AAA booking trends show Americans are making travel plans, though cautiously and more spur of the moment, the forecast says.

With air and rail travel off much more significantly, travel by car is the favored alternative, accounting for 97% of the favored mode of transportation, the forecast shows.

“Americans will get out and explore this summer though they’re taking a ‘wait and see approach’ when it comes to booking and are likely to book more long weekend getaways than extended vacations,” said Paula Twidale, AAA’s senior vice president of travel. “When they do venture out, travelers will take to the road with 683 million car trips to satisfy their wanderlust.”

Car trips will also see the smallest decrease in travel volume of just 3% year-over-year.  Without the pandemic, AAA would have been predicting more than 850 million trips, up from last year.

Here is a breakdown of the forecast by type of travel:

Cuomo said he would announce the state's full coronavirus numbers later today, but told CNN’s Alisyn Camerota that there were 996 hospitalizations and 17 deaths across the state as of today.

The governor also said that travelers will be fined if they violate the travel advisory issued by his state — along with New Jersey and Connecticut — that requires people arriving from states with high coronavirus rates to quarantine for 14 days.

“We worked very hard in New York, and the people of New York sacrificed for the past three months. They closed down, they [wore] masks, they socially distanced. We have the virus under control, and we don't want to see it go up again. It's that simple, and people understand that,” he said.

“People, at the end of the day, they get it now. It took them too long to get it, but this country gets it now,” he added.

Cuomo responded to criticism from political leaders such as Florida Gov. Ron DeSantis, who had mandated a 14-day quarantine for travelers from the New York area back in March.

“The people who played politics now are causing this nation great havoc. You're seeing it all across the country. You're seeing the deaths numbers going up. We'll lose tens of thousands more Americans. It's a real American tragedy that we're living through right now,” he said.