As confirmed coronavirus cases spike in the western United States, the governor of New Mexico says they are putting further economic reopening plans on hold.

“What we’re seeing around us, and what we’re seeing right here in our home state, is a clear indication that we’re not quite ready to go to phase two,” Gov. Michelle Lujan Grisham said Thursday during a briefing.

While New Mexico’s case load has not gotten as dramatically high as its neighbors, Arizona and Texas, Grisham said there is still too much risk.

“We can manage being flat. Our goal should be to reduce cases,” the governor said.

Grisham said “the last thing anyone wants” is to have to roll back economic progress since businesses began to reopen.

“The virus has not gone anywhere. I think there’s a false sense of security now,” the governor said. “New Mexicans actually have gotten really lax, I think, about wearing masks and taking this seriously.”

Microsoft founder Bill Gates dismissed the White House's claim that an increase in case numbers is a direct result of an increase in testing, calling it "completely false."

"It's fair to say, you can find more cases when you do more testing, but the US is experiencing a rebound, even once you factor out the increased testing," Gates said during CNN's coronavirus town hall.

Local officials, he said, have "gotten their act together on testing."

Gates said testing capacity will continue to increase in the fall, and "that's good news."

"But that's not the reason we're seeing these case increases," he said.

Microsoft founder Bill Gates said Thursday that the current coronavirus picture, both globally and in the US, is "more bleak" than he would have expected.

Gates, speaking at CNN coronavirus town hall, attributed the rise in numbers to a lack of testing and contact tracing, as well as a lack of mask wearing.

"The range of behaviors in the US right now, some people being very conservative in what they do, and some people ignoring the epidemic, is huge," Gates said.

The Charleston City Council approved an ordinance to require face coverings to reduce the risk of exposure to Covid-19, according to a statement.

The ordinance will take effect on July 1.

"The ordinance is a fine-only offense and will be enforced primarily via educational efforts by civilian officers with the city’s Livability Department. It will remain in effect for a period of 60 days, unless otherwise terminated," the statement said.

Check out this list of the states requiring people to wear masks when out in public.

At least 30 states across the US — 60% — are reporting an increase in new coronavirus cases in the past week, compared to the previous week.

Of those states, 13 are reporting a 50% or greater increase.

New cases are trending down in 11 states, while nine are seeing steady numbers. 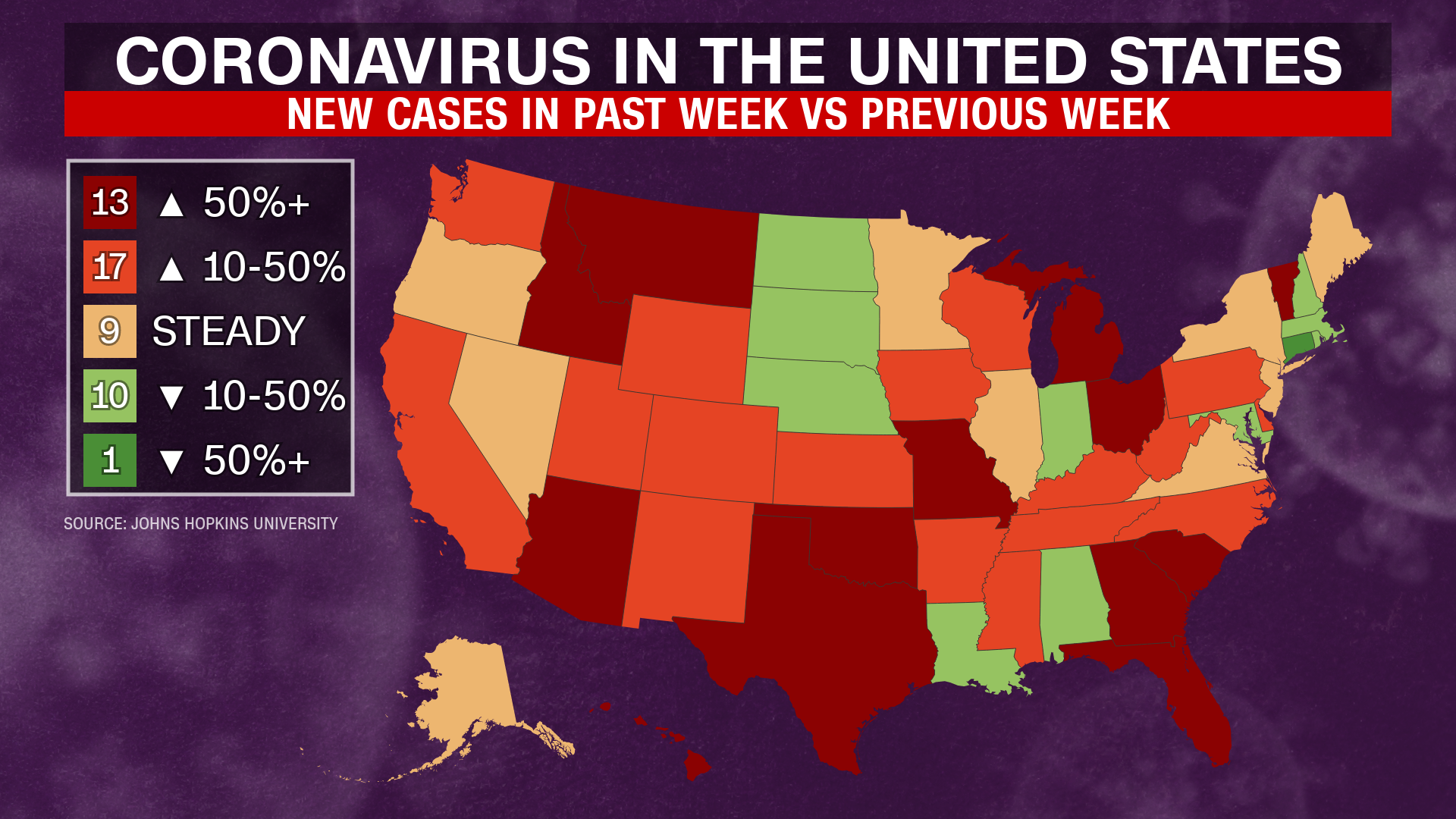 Barbara Ferrer, the director of the Los Angeles County Department of Public Health, said people need to start working together to contain the spread of coronavirus as cases spike in California and several other states across the country.

"Obviously when your numbers start going in the wrong direction, it means that more people need to do the right thing. More people need to get back on track. They need to take the steps that protect each other," she told CNN on Thursday.

"This is our unfortunate reality. I know many, many, many people are kind of done with this virus, but the virus isn't done with us. We have many, many weeks ahead," she said.

Some context: California obliterated its previous single-day high with 7,149 cases reported on Tuesday, according to state Department of Public Health. The previous record, set the day before, was just more than 5,000. Hospitalization and intensive care rates due to the virus are also at an all-time high in the state.

"I think as we had anticipated with more people out, we would have seen the increase. I think the increase has happened much quicker than we thought it would," Ferrer said.

Former New York Yankee and 14-time all-star Alex Rodriguez laid out the challenges Major League Baseball players will face this summer as they take on an abbreviated 60-game season under strict new rules designed to prevent the spread of coronavirus.

"If I was still playing for the Yankees, I would be driving to Yankee Stadium... in my pinstripes," said Rodriguez. "There is a world where there is no bat boys, there's no bat girls… You can't spit… no tobacco... even sunflower seeds."

"Think about a world, you going into the office it's like not being able to use your computer or even email someone," he continued. "It's going to be a very strange season."

The new rules, laid out in a 113-page manual, ban spitting, arguing with umpires, fighting, public transportation to the stadium and communal food spreads among other comforts, according to the New York Times.

Players and coaches will undergo frequent coronavirus testing and pitchers must use a wet rag in their pocket to dampen the ball for grip instead of spit.

"What's interesting to note is a Major League Baseball game, you usually have nine to 11 dozens of baseballs. …We live in a world today that we could go through 30 or 40 dozens of baseballs because anytime a ball touches anyone, you throw it out of play," he said.

A coalition of airline worker unions asked Congress on Thursday to extend the industry payroll bailout through next March to stave off what they warned are inevitable mass layoffs.

Six unions whose members include flight attendants, pilots, and ground-based aviation workers pointed to signals from airline executives that job cuts are on the horizon when the federal money stops flowing on October 1.

“Only through an extension of PSP grants can Congress ensure that airline workers will continue to stay on payroll and ready to turn the industry around, prevent mass unemployment in October, and keep aviation workers ready to lift off as travel picks back up,” the groups wrote, referring to the Payroll Support Program that paid out as much as $25 billion to passenger airlines to prevent layoffs.

Some background: The program required airlines to continue paying the employees and agree to other terms, including a minimum level of service for airports nationwide.

The letter was addressed to the leaders of both the House and Senate.

Arizona Gov. Doug Ducey said the state’s reopening plans are now “on pause” as a result of a major spike in coronavirus cases.

“It's growing, and it's growing fast across all age groups and demographics,” he said at a news conference Thursday. “Anyone can get this virus, and anyone can spread this virus."

Ducey said the state will not be rolling back their business reopening plans, but will be requiring businesses to follow social distancing rules that remain in effect.

Even with the new policy, Ducey said it’s too late to put an immediate dent in the coronavirus numbers.

“We expect that our numbers will be worse next week and the week following," he said.