Today's briefing comes as at least 32 states are seeing an increase in cases of Covid-19, and California, Oklahoma and Texas are seeing fresh high peaks.

The briefing will not take place at the White House, but at the Department of Health and Human Services, according to a schedule released by the White House.

In recent days, President Trump has tried to declare the pandemic "over" despite the rising numbers, and has instead focused his administration's energy on reopening the economy.

Since Pence was tapped to lead the coronavirus task force on February 27, there have been a total of 47 briefings at the White House, most led by President Trump, and a few led by the vice president.

Note: This briefing count does not include a Rose Garden event in which President Trump touted the administration's testing efforts on May 11, since it was not an official coronavirus task force briefing.

At least 32 states are reporting an increase in new coronavirus cases in the past week compared to the previous week.

Of those, 11 states — included as Florida, Texas and Arizona — have seen a 50% increase or more. 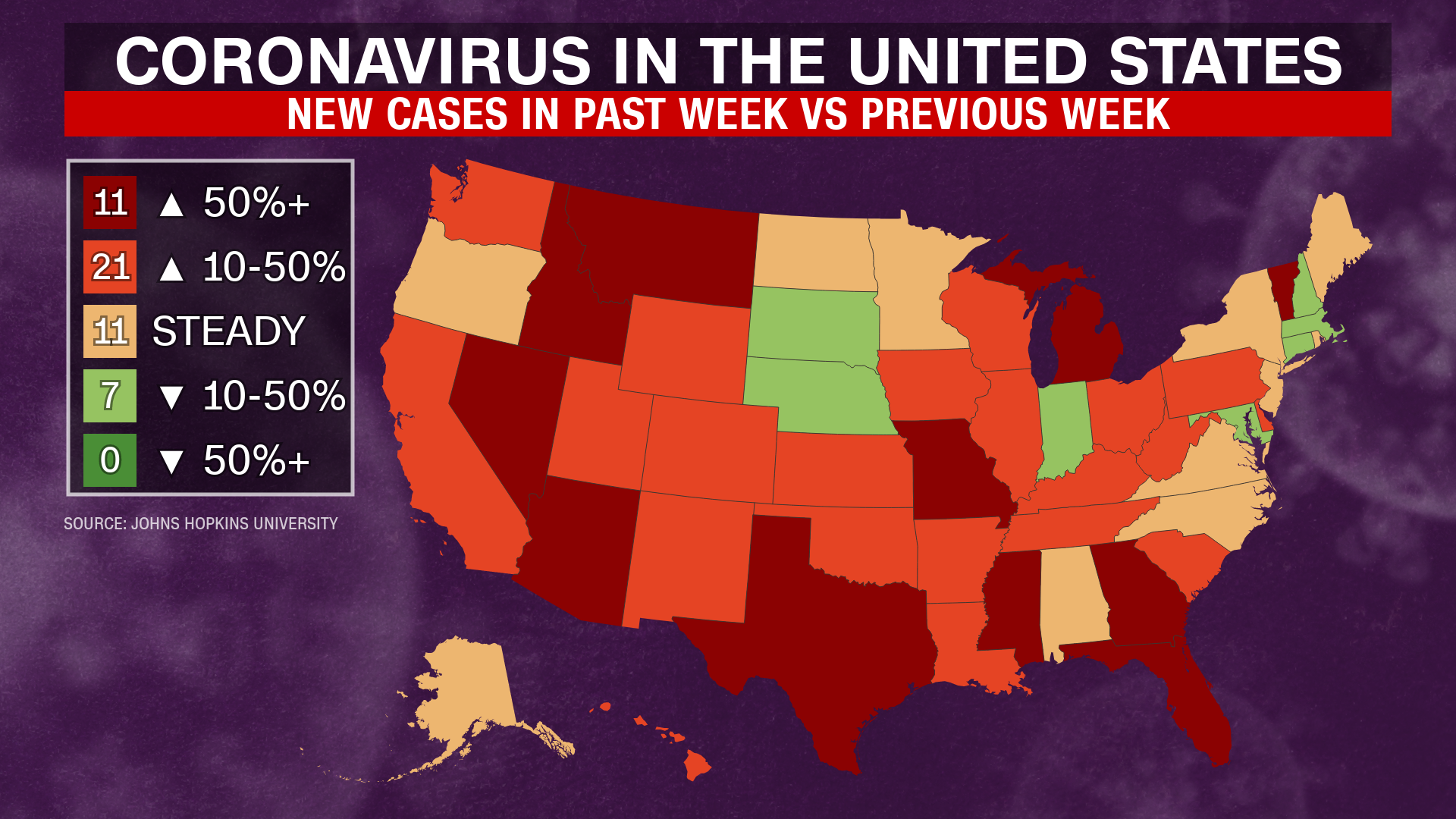 The number of Covid-19 cases in Latin America reached a total of more than 2 million infections this week, according to the Pan American Health Organization (PAHO).

Cases of Covid-19 in Latin America tripled from almost 690,000 on May 23 to more than 2 million as of yesterday, PAHO's director Dr. Carissa Etienne said Wednesday.

This week, Brazil has surpassed 1 million Covid-19 cases, joining the United States as the only other country in the world with cases in the seven digits, PAHO said. Mexico also rose to the fourth country with most cases in the continent. On Thursday, Colombia reported a new record high number of daily Covid-19 deaths.

There is now widespread transmission in most of Central America, while the Caribbean has hotspots on the border of Haiti and the Dominican Republic, as well as in northern South America, according to Etienne.

The 10 countries with the highest number of Covid-19 infections and deaths in Latin America are:

Nearly 400,000 people will die from Covid-19 in Latin America and the Caribbean by October, according to a new study released Thursday from The Institute for Health Metrics and Evaluation at the University of Washington projects.

Following Texas' announcement that it will pause any further phases to reopen the state as Covid-19 cases increase, Austin Mayor Steve Adler says that “pausing will not make things better.”

In Austin, the hospitalization count is more than 200% higher than what it was two weeks ago, the mayor said.

Adler said the state opened up before it had sufficient testing and tracing in place — but the key issue is that wearing masks is not mandatory in the state.

“When you open up an economy, [you have] to couple that with religiously wearing face masks and religiously maintaining social distancing. That has to be part of opening up the economy, and that's something that did not happen here,” he said.

President Trump and Gov. Greg Abbott undercut the message to wear masks, Adler said, and that people in the state need to change their behavior now.

“Our governor wears face masks. The problem is that by not making it mandatory, even he sends a conflicting message. We have to make it mandatory,” Adler said.

Millions of people could die if the coronavirus pandemic sees a second wave of infections, a World Health Organization official warned Friday, adding that the deadly outbreak has so far unfolded much like officials at WHO had anticipated.

“The comparison is with the Spanish Flu, which behaved exactly like Covid: it went down in the summer and fiercely resumed in September and October, creating 50 million deaths during the second wave,” Dr Ranieri Guerra, WHO assistant director-general for strategic initiatives told Italy’s Rai TV.

“The pandemic is behaving as we hypothesized,” he added.

Guerra’s remarks come as several countries in Europe – and across the globe – begin to relax national confinement measures, originally introduced to limit the spread of coronavirus.

Germany and France have pledged hundreds of millions in extra funding for the World Health Organization (WHO) just weeks after Donald Trump announced the US would terminate its relationship with the body.

German Health Minister Jens Spahn announced at a press conference in Geneva on Thursday that his government was set to provide an extra €266 million ($298 million) in funding to the WHO.

"We... are supporting WHO with an additional €41 million for its core mandate until 2023," Spahn said Thursday.

"Additional to this we are providing [an] additional €25 million for the implementation for the strategic preparedness response plan."

"And due to the still remaining major funding gap to implement the strategic preparedness response plan until the end of this year, the German government has decided to provide [an] additional €200 million to the WHO on top of the €110 million ... which we have already pledged."

Spahn said the funding had not been approved by the German parliament but added that the government was "very confident" it would be approved.

Germany will also provide medical masks and equipment, including ventilators, for countries in need.

WHO chief Tedros Adhanom Ghebreyesus said on Twitter that the organization was "very grateful" for the country's pledge.

France will give €90 million to a WHO center, a further €50 million towards the WHO's coronavirus response effort and €100 million worth of masks.

The funding effort comes after President Trump said he would end the US' relationship with the international health organization on May 29.

Scientific evidence suggests that wearing a face mask can help stop the spread of Covid-19. New polling confirms that some regions of the US are taking that message to heart more than others.

Specifically, residents of the Northeast (led by New York) said they're wearing masks at a significantly greater rate than the majority of the country.

That's the finding of an aggregation of more than 6,000 respondents from Ipsos Knowledge Panel polling done for Axios (Axios/Ipsos poll). Over the last month and a half (May 8 to June 22), a fairly stable 48% to 51% of Americans told the pollster that they wore masks at all times when leaving home. Other pollsters, who have asked analogous questions during the same period, have shown similar numbers overall.

In the Axios/Ipsos polling, you can clearly see how much ahead of the curve New York (among the 28 states for which we had at least 75 respondents) and the Mid-Atlantic (see here for all Census division subsets) portion of the Northeast are when it comes to mask wearing.

Of the over 750 Mid-Atlantic respondents, 64% say they are always wearing masks when they go out. As Ipsos did in a recent poll with the Washington Post, they were able to drill down to the state level in some instances too.

In New York, 67% say they're wearing a mask at all times when they leave their house. That's the highest percentage for any state for which there were at least 75 respondents polled.

While serving in the Navy during the Korean War, Robert Blais once jumped overboard to rescue a fellow sailor.

"He gave his life jacket to save a man," his daughter Cheryl Blais said, recounting a favorite story of the man she so admired. Her father didn't drown that day in the Pacific. But he would drown by Covid-19 many decades later on the morning of March 30, when the disease flooded his lungs with fluid.

Blais, who was 90, spent his final months of life at the Soldiers' Home in Holyoke, 90 miles west of Boston. As the virus ravaged the facility, no fewer than 94 veterans lost their lives, at least 76 of those lost testing positive with Covid-19.