The Florida Department of Health is reporting at least 8,942 new cases of Covid-19, bringing the state total to 122,960, according to data released by the state on Friday.

Friday's data is the highest single day reporting of coronavirus cases since the start of the pandemic.

Members of the Texas congressional delegation on both sides of the aisle are asking the Trump administration to reconsider its decision to halt direct funding to several coronavirus testing sites in the Lone Star State, where there has been a surge of Covid-19 cases.

Lawmakers from the state, including Republican Sens. John Cornyn and Ted Cruz, say they do not understand why the federal assistance is being pulled as their state sees more and more coronavirus cases.

"Frankly, I didn't understand what they were thinking," Cornyn told CNN on Thursday.

In a joint letter sent to Health and Human Services Secretary Alex Azar and FEMA Administrator Pete Gaynor on Thursday, Cornyn and Cruz urged the administration "to grant an extension of the program for the testing sites in Texas," which they said are "critical to Texas' testing capacity."

A transition away from these federally funded sites began in April, but the latest debate over federal funding comes after President Trump on Saturday lamented the rise in coronavirus cases in the US, blaming increased testing.

The federally funded testing program was intended to jump-start initial capabilities in critical areas across the US, according to the Federal Emergency Management Agency.

But given Food and Drug Administration approval for individuals to self-administer nasal swab tests at sites, the demand for personal protective equipment and trained health care providers will be reduced, a FEMA spokesperson said in a statement in April, when the administration began its transition away from the program.

A Health and Human Services spokesperson confirmed to CNN that the 13 Community-Based Testing Sites, seven of which are in Texas, would no longer receive direct funding.

What other Texan lawmakers are saying: Speaking to CNN's Jim Sciutto, Rep. Vicente Gonzalez, a Democrat from Texas, said that given the spike in Covid-19 cases, the state "clearly opened too fast and too soon."

Gonzalez noted that Texas reported nearly 6,000 cases yesterday and said his district in the Rio Grande Valley had a 700% increase just in the last 30 days.

“That would be reprehensible to imagine that we would be cutting tests at a time when our pandemic is increasing in leaps and bounds,” Gonzalez said. "I hope that the President follows CDC recommendations, listens to Senator Cruz and Senator Cornyn and the rest of us, assuring that testing is robust, that it is widespread, that it is available. It is the only way we are going to get this under control."

As a part of phase three of reopening in New York City, personal care business and indoor dining at 50% capacity can begin on July 6, according to Mayor Bill de Blasio.

A number of states are putting their reopening plans on hold as new coronavirus cases continue to rise.

At least 32 states are reporting increases in new cases, and the US is currently averaging more new coronavirus cases per day than at any point in the pandemic, according to a CNN analysis of numbers provided by Johns Hopkins University.

Here's a look at how some states are slowing down their plans to reopen:

Harris County, Texas, Judge Lina Hidalgo will increase the county’s warning system to its highest level of “severe” today, a county official tells CNN. Houston, Texas' most populous city, is in this county.

What this alert level means: Harris County defines the updated alert level as one that signifies a severe and uncontrolled level of Covid-19 in Harris County, meaning outbreaks are present and worsening and that testing and contact tracing capacity is strained or exceeded.

At this level, the county urges residents to take action to "minimize contacts with others wherever possible and avoid leaving home except for the most essential needs like going to the grocery store for food and medicine.“

Some background: The three most populous US states are setting records for new coronavirus cases daily — and an expert fears major Texas cities could see "apocalyptic" numbers if the trend continues.

In Texas, if the current case trajectory continues, Houston could be the hardest-hit city in the US with numbers rivaling those in Brazil.

Texas Gov. Greg Abbott issued an executive order today that limits certain businesses and services as part of the state’s effort to "contain the spread of Covid-19."

Texas is among at least 11 states seeing a 50% increase or more in cases compared to the previous week.

Here is what the order includes:

“As I said from the start, if the positivity rate rose above 10%, the State of Texas would take further action to mitigate the spread of Covid-19,” Abbott said in a statement. “At this time, it is clear that the rise in cases is largely driven by certain types of activities, including Texans congregating in bars. The actions in this executive order are essential to our mission to swiftly contain this virus and protect public health."

Multiple health experts are discussing the possibility of "pool testing" — a method of coronavirus testing that mixes several samples together into a "batch," or pool.

Dr. Deborah Birx, the White House coronavirus response coordinator, said the new approach could drastically expand the nation's knowledge of how and where the virus is spreading,

"If you look around the globe, the way people are doing a million tests or 10 million tests is they're doing pooling," Birx said during an online conference of the American Society for Microbiology. "Pooling would give us the capacity to go from a half a million tests a day to potentially 5 million individuals tested per day by those poolings."

Birx added that there could be opportunities to do five-people pools or greater, which would allow for people to return to schools sand workplaces with the ability to test on a frequent basis.

“Something’s not working,” Fauci said of the nation's current approach in an interview with The Washington Post  “I mean, you can do all the diagramming you want, but something is not working.”

Here's how Pooling works: “Pooling refers to a testing technique in which allows a lab to mix several samples together in a 'batch' or pooled sample and then test the pooled sample with a diagnostic test. For example, four samples may be tested together, using only the resources needed for a single test," Dr. Jeffrey Shuren, director of the Center for Devices and Radiological Health at the US Food and Drug Administration, said in a written statement last week.

"If the pooled sample is negative, it can be deduced that all patients were negative. If the pooled sample comes back positive, then each sample needs to be tested individually to find out which was positive," Shuren said. "Because samples are pooled together, ultimately fewer tests are run overall, meaning fewer testing supplies are used, and results can be returned to patients more quickly in most cases."

The US is currently averaging more new coronavirus cases per day than at any point in the pandemic, according to a CNN analysis of numbers provided by Johns Hopkins University.

Thursday marked a record for the most new cases reported in a single day in America — at least 39,972. 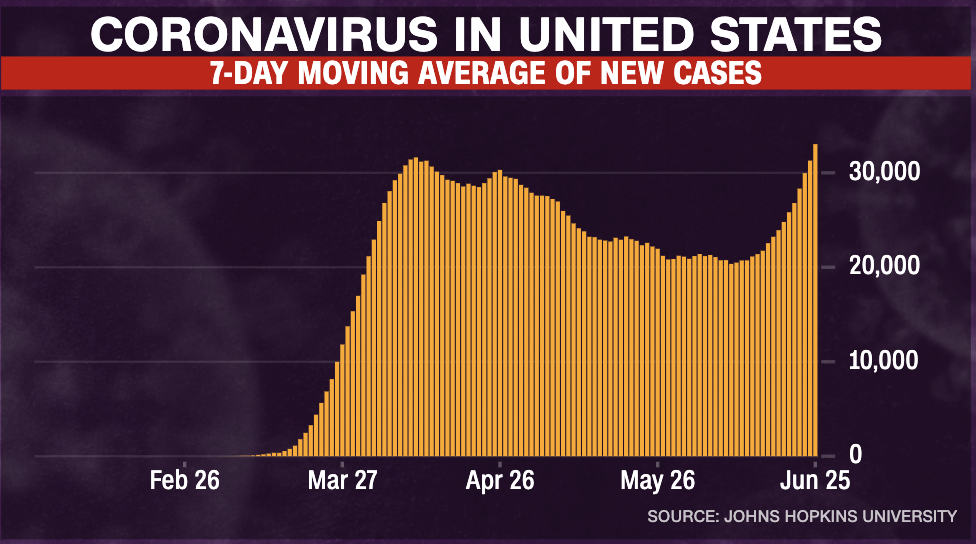 US stocks kicked the session off lower on Friday. Worries about the state of the economy, as well as a resurgence in Covid-19 cases, remains on investors' minds following Thursday’s stress test results from the Federal Reserve.

While the results gave banks a clean bill of health, it highlighted the fragility of the economy once more. America’s big banks, which were among the top gainers Thursday, dropped at the opening bell.