The order will go into effect at 8 a.m. Monday morning local time.

“Unfortunately, not enough people are practicing the distancing needed to keep the curve flat, so we have a choice between doing nothing, hunkering down, or masking up,” Mayor Ethan Berkowitz said in a statement.

Anchorage has experienced a significant increase in new cases over the past week, according to the city’s health department. Officials say some of the cases come from non-residents who are in the state as seasonal workers in the seafood industry.

At Friday's press briefing by the White House's coronavirus task force -- the first in nearly two months -- Vice President Mike Pence painted a rosy picture of a country steadily getting safer and back to normal.

It was a picture at odds with reality.

Leaving out critical information, Pence delivered a more polished version of the upbeat, all-is-well dishonesty that was a hallmark of previous briefings by President Donald Trump, who did not attend the Friday session.

"Despite what you heard, we are in the middle of a public health disaster," CNN chief medical correspondent Dr. Sanjay Gupta said on air after the briefing.

Pence boasted that "we flattened the curve."

Fact check: The curve for the number of new confirmed cases did decline and plateau in April and May, but has headed sharply upward again in June.

Pence claimed that "all 50 states" are "opening up safely and responsibly."

Fact check: About 30 states are experiencing increases in the rate of new cases, and states reopened without having met the administration's recommended safety milestones.

Pence claimed the country is finished with the painful part of the pandemic, saying "we're in a much better place" than two months ago and the US is no longer "in a time of great losses and great hardship."

Fact check: He was right that the current number of daily deaths is substantially lower than it was at its peak -- but the pandemic is still killing more than 500 Americans a day. The May unemployment rate was 13.3%. In other words, the loss and the hardship continue. 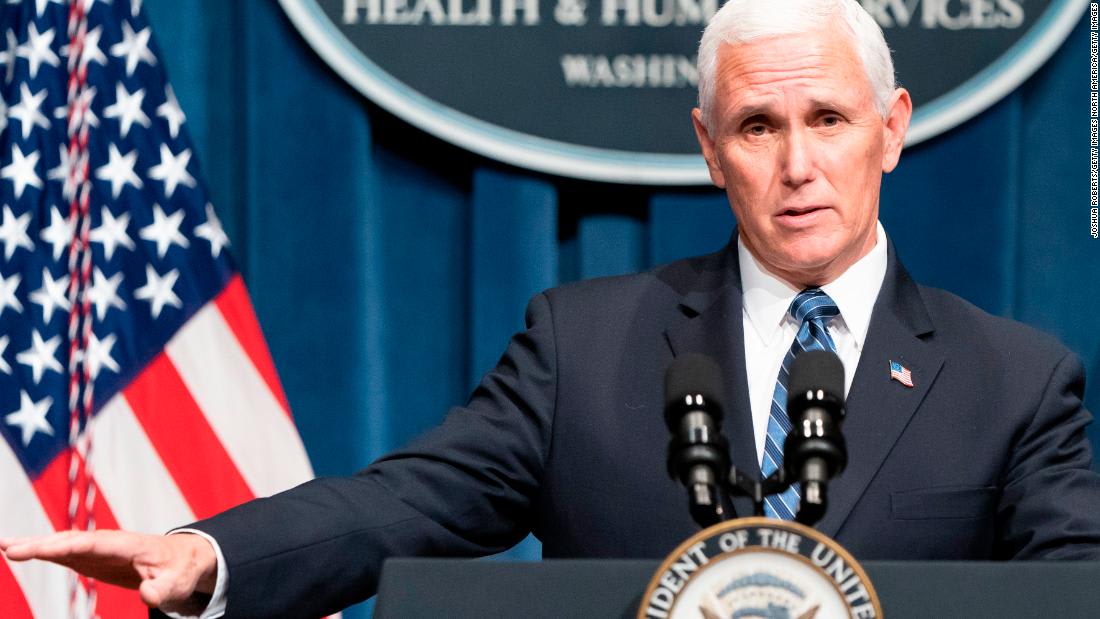 At least six US states reported their highest single-day jump in new coronavirus cases on Friday, according to data from Johns Hopkins University:

South Carolina also had its second-highest one-day jump on Friday.

“This is a sad moment,” epidemiologist Dr. Larry Brilliant told CNN. “In all the modeling we did, in all the projections, we never modeled a federal government that didn't take charge, that didn't have a strategy. It's really disheartening."

The US recorded more than 40,000 new cases on Friday alone, and infection rates are going up in more than 30 states, forcing several to dial back their reopening efforts -- which Pence didn't address in the briefing.

"This is the all-time high we've had since the beginning of the pandemic and we squandered five months,” Brilliant said.

“What I worry about now is the Fourth of July,” he added. “We had Memorial Day; three or four weeks after that we had a peak in cases. Two or three more weeks from now, we'll have a peak in deaths.”

Michael Osterholm, director of the Center of Infectious Disease Research and Policy at the University of Minnesota, warned that the US was "still just in the very beginning of the pandemic."

Only about 5-7% of the US population has been infected so far, he said, and herd immunity would require about 60-70% be infected. "So, when you think about all the pain, suffering, death, economic disruption we've had, think about how much more we have to go," he added.

Mexico has the fourth-highest number of cases in Latin America. On Thursday, Mexican Finance Minister Arturo Herrera announced he had tested positive for Covid-19.

The US had its biggest one-day jump in new coronavirus cases on Friday, with 40,173 cases reported nationwide, according to data from according to Johns Hopkins University.

The first known US coronavirus-related death was on February 6 -- 141 days ago, according to CNN reporting.

Sao Paulo, Brazil’s most populous state and the epicenter of its Covid-19 outbreak, has at least 258,508 confirmed cases. At least 13,966 people have died from the virus there, according to the state health secretary.