Iranian President Hassan Rouhani said in a televised statement on Sunday that 2020 has been the toughest year in the nation's history because of US sanctions and the spread of coronavirus.

“From the enemy's economic war and the coronavirus pandemic, this year is the most difficult year in our country’s history," Rouhani said during his cabinet’s meeting.

“For 140 years we have not experienced such a disease,” Rouhani added.

Confirmed coronavirus cases in Iran surpassed 220,000 with deaths crossing the 10,000 mark over the last week, according to data from the Iranian health ministry.

Despite a decrease in the number of reported cases in April in Iran, infections started increasing once again during May and June.

The Houston bars Scott Repass co-owns had been open about three weeks before the governor shut down their business again in response to a surge in new coronavirus cases.

In the short time they were open, Repass says staff followed safety guidelines to a T: they required customers wear masks when moving around. They offered hand sanitizer at the door. Bartenders and servers wore masks. Nobody congregated and almost nobody used cash. But that didn't prove to be enough.

Unsure of how long this second hit may last, Repass has now filed for unemployment. And he's not alone.

Bar owners across the state and in other parts of the country that were forced into a second shutdown say they don't know what this time around may look like -- and whether they'll be able to survive it.

If you’re just joining us, here’s the latest on the global Covid-19 pandemic.

More than 500,000 people have died from the coronavirus, and more than 10.1 million cases have now been recorded worldwide, according to Johns Hopkins University.

US "window is closing": A large proportion of these cases are in the United States, where Health and Human Services Secretary Alex Azar warned Sunday that the "window is closing" for the country to get the pandemic under control, as confirmed cases are surging in a majority of the country and some states are dealing with record numbers of hospitalizations.

Only two US states are reporting a decline in new coronavirus cases compared to last week: Connecticut and Rhode Island.

A rise was reported in a staggering 36 states, including Florida, which some experts have cautioned could be the next epicenter for infections. Officials there and across the US are also warning of an increase in cases among younger people.

China locks down province of 400,000 after just 18 new cases: China isn't taking any chances of a second wave gripping the country -- despite having largely contained its outbreak in recent months.

In stark contrast to the relaxing of restrictions amid spiking infection rates in the US and parts of Europe, about 400,000 people have been placed under strict lockdown in Anxin county, in the central province of Hebei, near Beijing, after just 18 fresh cases were detected.

India sees more than 100,000 new infections in six days: India has recorded its biggest one-day jump in new coronavirus cases for the eighth consecutive day, after 19,459 new cases were reported on Monday, according to the country's health ministry.

Three of the country's states -- West Bengal, Jharkhand and Assam -- are extending lockdown measures past June 30, the date that the country's final stage of nationwide lockdown is set to lift.

Sunday’s count was the 14th consecutive day of double-digit increases in new coronavirus cases in Victoria -- and the largest single-daily increase reported by the state since March 30. “I think it’s a concerning number,” said Victorian Chief Health Officer Brett Sutton, adding: “I think it will get worse before it gets better.”

Latin America sees surge in cases as some countries re-open: Brazil reported 30,476 new coronavirus cases in the past 24 hours, as some areas continue the reopening process, bringing the country's total number of cases to 1,344,143. The death toll stands at 57,622, while the country continues reopening measures in certain areas -- Rio de Janeiro city issued a decree Friday allowing the public to attend stadiums to watch soccer matches of the local Carioca Championship.

Mexico has the 7th highest number of Covid-19 deaths worldwide, with a total death toll of 26,648.

Kristina Wong is an actress and comedian known for her one-woman shows. But she traded the stage for a sewing machine and formed a team of volunteers to make masks during the coronavirus pandemic.

At the beginning of the pandemic, people frantically searched for masks. Material to make them was limited. But Wong had scraps of fabric laying around her home as she sews her own stage props. She learned the basics of sewing helping her mother quilt as a kindergartener and picked up sewing machine skills in her sixth-grade home economics class.

"I was like 'I can do this. I can sew.' I just sort of refuse to believe that we're powerless in these situations," she said. "I made my first mask on March 20th. I posted on my Facebook page 'If you are immunocompromised or don't have access to masks, I'll make you a mask. Just reimburse me $5 for postage.'"

Hundreds of requests for masks poured in, and Wong soon realized she couldn't do it alone.

"I was saying 'yes' faster than I could sew."

So, she posted a plea for help.

Soon, others began volunteering and Wong launched a Facebook group called the "Auntie Sewing Squad." It started with just 26 people. Now, it has more than 800 sewers across the United States.

So far, the group has distributed more than 55,000 masks to communities in need. Wong is proud of the group. But she is also frustrated.

"I do refer to our group as a 'sweatshop' because I don't want to romanticize it. While we are enjoying each other's company in this very strange time in history, we shouldn't have to be doing this work. This is absolutely the government's job. We should not have had to turn our homes upside down into sweatshops and pull the sheets off our beds to make masks." 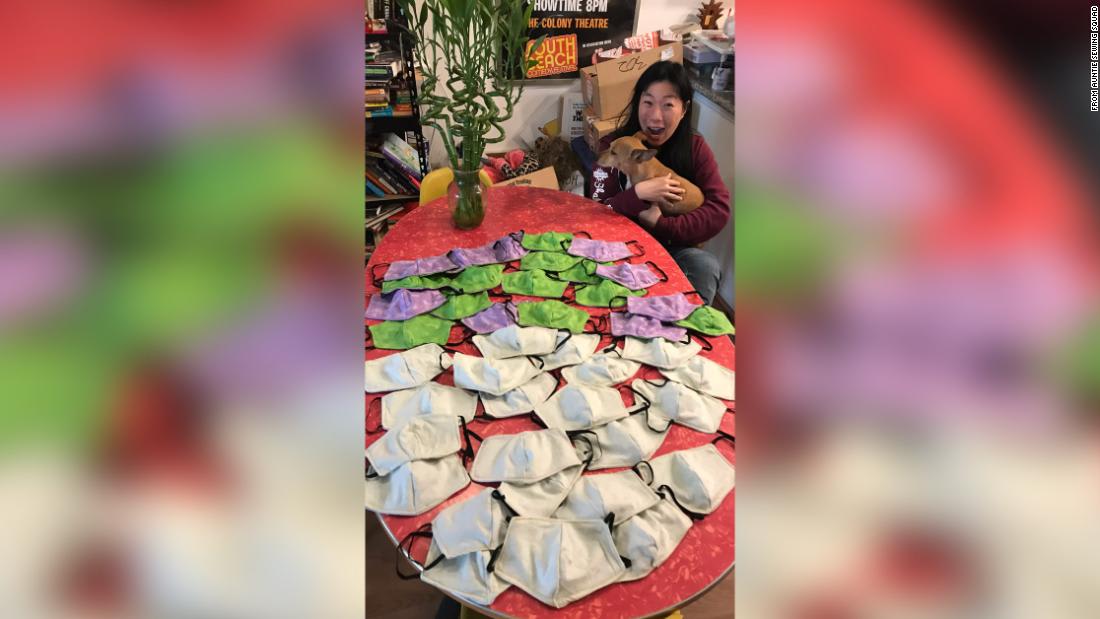 A volunteer 'sewing squad' distributed more than 55,000 masks to vulnerable communities in 3 months. They're not slowing down

Weeks after most US states began lifting their lockdowns, parts of the country are clamping down on renewed restrictions hoping to slow staggering surges in new case numbers.

With July 4 approaching, officials are trying not to repeat scenes of Memorial Day, when thousands across the country flocked to beaches, bars and parties while experts cautioned the crowds could lead to spikes in cases down the road. At least 12 states have hit a pause on their reopening plans, hoping to contain the spread.

Some places directed their bars to close back down, while beaches in Miami, Fort Lauderdale and Palm Beach were ordered off-limits to the public during the upcoming holiday weekend.

The announcements come after a devastating week for the country, during which many states reported highest single-day spikes and the US also recorded its biggest single-day increase in cases, with 40,173 reported Friday.

But those numbers may just be a glimpse into how widespread infections across the country are, as a survey from the US Centers for Disease Control and Prevention found the total numbers of infections could be up to 24 times higher than reported.

What happens next is unclear. Local and state leaders have vowed they'll do whatever it takes to stay away from a second lockdown. But many have stopped short of taking the option off the table. 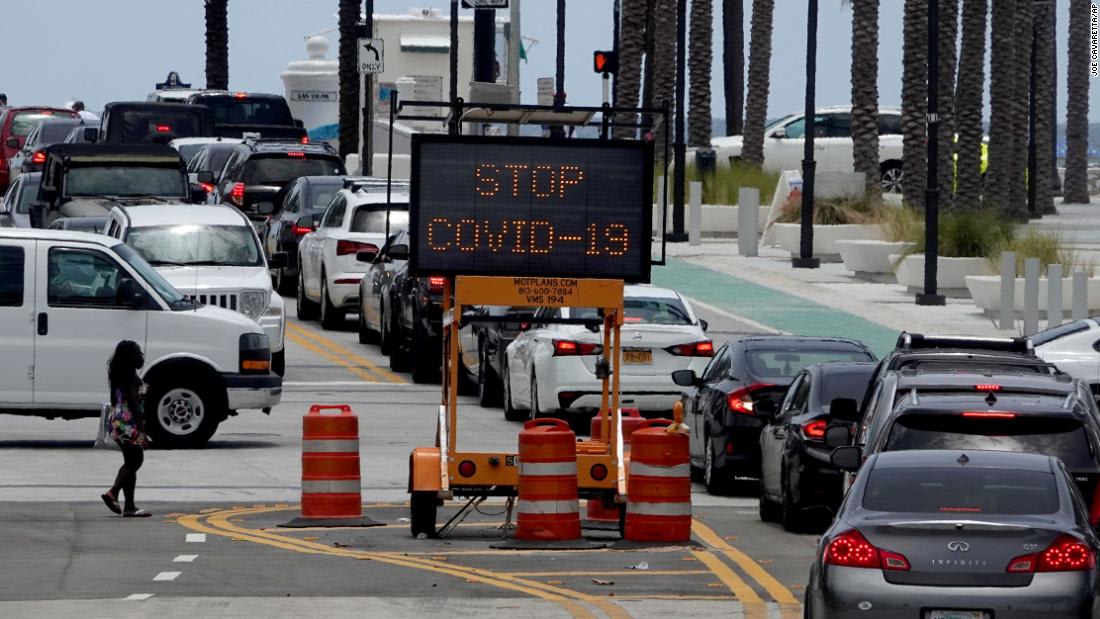 A “significant proportion” of people who were hospitalized with coronavirus “will go on to develop symptoms” of post-traumatic stress disorder (PTSD), according to a report from the United Kingdom’s Covid Trauma Response Working Group.

Dr. Michael Bloomfield, a trauma expert on the group’s panel, believes PTSD screening should be “mandatory” for discharged Covid-19 patients.

“We are very concerned about the level of exposure to psychological trauma during the pandemic,” Dr Bloomfield also tweeted.

Being critically ill is described as a “physically and emotionally overwhelming experience” by the group, who say one-in-five intensive care patients usually experience PTSD post-treatment.

Three Indian states are extending lockdown measures past June 30, the date that the country's final stage of nationwide lockdown is set to lift.

The eastern states of West Bengal and Jharkhand have extended their lockdowns until July 31, while the northeastern state of Assam has imposed a total lockdown in its Kamrup metropolitan area until July 12.

In Jharkhand: The state's Chief Minister Hemant Soren tweeted on Friday that the "struggle is still going on."

"Considering the seriousness of the situation, the state government has decided to extend the lockdown till 31 July. The relaxations in lockdown already issued will remain in place," Soren said.

In Assam: The state announced a "total lockdown" in the Kamrup metropolitan area, meaning all activity will remain closed apart from essential services, including public transport and industrial activity, according to an order issued by the government of Assam on Friday.

In West Bengal: All non-essential activities will remain closed. Academic institutions across the country are scheduled to resume classes in July, but West Bengal Chief Minister Mamata Banerjee said that schools and colleges in the state will remain shut until July 31 -- aside from a few examinations, which will be carried out while maintaining social distancing.

"Since Covid is increasing across the country, it is our responsibility to help the country the little bit that we can in reducing cases so let us try to extend the lockdown for a few more days," Banerjee said Wednesday.

Nationwide: India issued a nationwide lockdown till June 30 in containment zones with a high number of cases. Directives are yet to be issued on whether the restrictions in these zones will be extended.

India has reported more than 548,000 coronavirus cases, including over 16,000 deaths, according to the country's health ministry.

Asian markets fell sharply Monday as the number of coronavirus cases around the world crossed more than 10 million, with at least half a million deaths.

On Friday, the Dow tumbled more than 700 points as some states were forced to pause their reopening amid rising Covid-19 cases. Upticks have been reported in 36 states, including Florida, which some experts have cautioned could be the next epicenter for infections. Officials there and across the United States are also warning of an increase in cases among younger people.

"The rebound of the infection rate, especially in the US, shows that the road to full recovery is going to be long and that it will require medical solutions, such as a vaccine," Tai Hui, chief Asia market strategist for JP Morgan Asset Management wrote in a Monday note.

The situation in the US could also prompt concerns in Europe, as European governments are considering opening borders more during the summer holiday season, he added.

"We expect market sentiment to turn cautious in the near term, with investors hedging risks from the pandemic and ongoing tensions between the US and China," Hui said.

Iranian President Hassan Rouhani said in a televised statement on Sunday that this year has been the toughest in the nation's history because of United States sanctions and the spread of coronavirus.

“From the enemy's economic war and the coronavirus pandemic, this year is the most difficult year in our country’s history," Rouhani said during his cabinet’s meeting.
“For 140 years we have not experienced such a disease”, Rouhani added.

Confirmed coronavirus cases in Iran surpassed 220,000 with deaths crossing the 10,000 mark over the past week, according to data from the Iranian health ministry.

Rouhani added that face masks are set to become mandatory starting next week in areas at risk of increased coronavirus infections.

Despite a decrease in Iran's number of reported cases in April, infections started increasing once again in May and June.