The state of Maharashtra, home to the financial hub Mumbai and Bollywood film production, will continue with lock down measures until July 31 as the number of cases steadily rise.

The state government has issued fresh guidelines for what it has named "Mission Begin Again." This includes movement for non-essential activities to be restricted within neighborhoods in the Mumbai Metropolitan Region.

"It is further directed that the movement of persons for the purposes of non-essential activities like shopping and the outdoor exercises, shall be restricted within the neighborhood area limits with all necessary prescribed mandatory precautions of wearing masks, social distancing and personal hygiene," a statement issued by the government read.

Only those going to work in offices and emergencies will be allowed unrestricted movement, the statement added.

"It is also directed that unrestricted movement will be permitted only for attending place of work and bonafide humanitarian requirement including medical reason.”

All essential shops, e-commerce activity for essential and non-essential items, all industrial units that are currently operational and home delivery of food will be allowed.

All essential and non-essential shops and market, except malls and market complexes, will be allowed to open from 9 am to 5 pm.

Health officials have long called contact tracing — following and monitoring the contacts of a person infected with the coronavirus — a key to help stop the spread of Covid-19. Yet many of the hardest hit states still haven't built up contact tracing to meet what has been recommended.

In April, the National Association of County and City Health Officials estimated that communities across the United States would need 30 professionals per 100,000 people in the community to be involved in contact tracing, given the magnitude of the Covid-19 pandemic.

Now in eight Covid-19 hotspots emerging nationwide, there are far fewer contact tracers than that estimate, according to new data obtained by CNN from Nephron Research, an independent health care research firm that has been monitoring contact tracing across states. The group's latest data report shows that as of Monday:

The only states in the nation that have at least 30 contact tracers per 100,000 people, according to the Nephron Research data, are:

What the experts say: Instead of doing contact tracing just by phone, communities need to have "boots on the ground" and do it in person, Fauci, director of the National Institute of Allergy and Infectious Diseases, said during an interview with CNN’s Elizabeth Cohen that aired Sunday night as part of the Aspen Ideas Festival.

Fauci noted that it’s difficult to do contact tracing with coronavirus, since in hotspots, 20% to 40% of those infected are asymptomatic, and in those cases, "contact tracing doesn't work no matter how good you are because you don't know who you're tracing."

"Americans need and deserve bold action now. We have overcome larger problems than the COVID-19 pandemic but not without powerful and effective actions by our government,” they wrote. "We are outraged that instead of holding bipartisan, bicameral negotiations during the June work period, you chose to prioritize the confirmation of right-wing judges and several Republican-led committees devoted precious time to chasing President Trump’s wild conspiracy theories."

Beaches in Miami, Fort Lauderdale and Palm Beach, popular with residents and tourists, will be closed Fourth of July weekend as officials keep a cautious eye on the rapidly rising number of new coronavirus cases in Florida.

Miami-Dade County Mayor Carlos Gimenez says all beaches and parks in the county will close from Friday, July 3, through Tuesday, July 7. He warned the closure could be extended if conditions don't improve and people don't follow rules designed to curb the spread of the coronavirus.

Beaches in Palm Beach County, Florida, will also be closed for the Fourth of July weekend, Mayor Dave Kerner said.

"That community spread that would go with that amount of people on the beach — we're not in a position to handle that," Kerner told CNN's New Day.

Broward County cities will follow Miami-Dade County's example to close beaches ahead of July 4, the city of Fort Lauderdale said in a tweet. Beaches in Broward County will be closed from July 3 through July 5, according to the tweet.

"The reason why we're doing this is because we feel that we will not be able to provide the necessary safe environment that everyone is entitled to enjoy when they come to our beaches," he said.

At least 12 states have by now paused or rolled back plans to reopen, hoping the move will slow further spread of the virus.

In the past week, officials and state leaders have made repeated pleas to Americans to stay away from crowded spaces, keep their distance and try to stay at home as much as possible.

Washington state Gov. Jay Inslee announced the counties that were preparing to enter into the fourth phase of reopening — with essentially no restrictions — will not do so just yet.

"We all want to get back to doing all the things we love in Washington during the summer, and fully open our economy, but we aren't there yet," the governor said in a statement. "This is an evolving situation and we will continue to make decisions based on the data."

In Texas and Florida — both of which have raised alarm among experts with a rapid rise in cases — bars were ordered closed for a second time after officials suggested they were a driving force behind cases of coronavirus.

At least 31 states are now seeing an increase in new cases compared to the previous week, according to data from John Hopkins University.

Air travel reached a new pandemic high point this past weekend, surging to as much as 24% of usual traveler volumes.

Transportation Security Administration (TSA) figures show about 2.3 million people passed through airport security checkpoints between Thursday and Sunday, down from the 10.4 million people the agency screened on the same days last year.

The busiest day was Sunday, when TSA screened nearly 634,000.

Sunday was American Airlines' second busiest day in terms of passengers since March, when air traffic was cratering. The airline has been capping flight capacity but recently announced that starting Wednesday it will allow every seat on each flight to be purchased.

Experts predict a surge of travel over the upcoming July 4 holiday weekend.

As the coronavirus pandemic continues, the World Health Organization announced on Sunday that there are now more than 1 million cases of Covid-19 in the eastern Mediterranean alone.

Places reporting a recent rise in cases in the area include: Iran, Iraq, Libya, Morocco, Palestinian territories and Oman. There also have been 23,461 Covid-19 deaths recorded in the region, which spans from Morocco to Pakistan, according to WHO.

"This is a very concerning milestone. As shops, restaurants, mosques, businesses, airports and other public places begin to open up, we need to be more vigilant and cautious than ever before. One million people have been infected, tens of thousands have died, and many more are still at risk in our Region," Dr. Ahmed Al-Mandhari, WHO regional director for the eastern Mediterranean, said in a press release on Sunday.

"We cannot relax our efforts. In fact, many countries lifting restrictions are seeing marked increases in cases, which signifies the need to accelerate public health response measures. Communities must remain vigilant and play a key role in keeping themselves and their countries safe," Al-Mandhari said in the release.

"Sadly, we cannot behave as if the situation will go 'back to normal.' In the coming period, we need to see a shift in attitudes and actions," Al-Mandhari said. "Now is the time for a sustained commitment from both governments and individuals."

Gilead Sciences, the company that makes the Covid-19 drug remdesivir, announced in an open letter on Monday morning that it has decided to set a price of $390 per vial for the US government, which would include Veterans Affairs and Department of Defense hospitals, and other governments of developed countries.

The discounted government price would not apply to Medicare or Medicaid, a Gilead spokesperson told CNN.

A typical five-day treatment course would include six vials, which would equate to $2,340 per patient, Daniel O'Day, Gilead Sciences chairman and CEO, said in the letter. The US government will continue to manage US allocations of remdesivir to hospitals through September, the company said.

The letter added that the price for US private insurance companies will be $520 per vial, which adds up to $3,120 per patient for a five-day treatment course of six vials.

"As with all our actions on remdesivir, we approached this with the aim of helping as many patients as possible, as quickly as possible and in the most responsible way. This has been our compass point throughout, from collaborating to find rapid answers on safety and efficacy, to scaling up manufacturing and donating our supply of remdesivir through the end of June. In each case, we recognized the need to do things differently to reflect the exceptional circumstances of the pandemic. Now, as we transition beyond the donation period and set a price for remdesivir, the same principle applies," O'Day said in the letter.

About the drug: Remdesivir, which is currently administered intravenously through infusions, is the only drug that has an emergency use authorization from the US Food and Drug Administration to treat coronavirus infections.

Until now, remdesivir treatments had been donated to the US government and allocated by the US Department of Health and Human Services and states. However, the US government’s last scheduled shipments of that donation are going out today.

"At the level we have priced remdesivir and with government programs in place, along with additional Gilead assistance as needed, we believe all patients will have access," O'Day said. "Gilead has entered into an agreement with the U.S. Department of Health and Human Services (HHS) whereby HHS and states will continue to manage allocation to hospitals until the end of September. After this period, once supplies are less constrained, HHS will no longer manage allocation."

HHS Secretary Alex Azar announced that agreement during an appearance on “Good Morning America” on Monday.

"President Trump has secured half a million courses of treatment of remdesivir through September," Azar told ABC's George Stephanopoulos.

CORRECTION: This post has been updated to show that Medicaid does not get the discounted price, but the VA and Department of Defense hospitals do.

Weeks after most US states began lifting their lockdowns, parts of the country are clamping down on renewed restrictions hoping to slow staggering surges in new case numbers.

With July 4 approaching, officials are trying not to repeat scenes of Memorial Day, when thousands across the country flocked to beaches, bars and parties while experts cautioned the crowds could lead to spikes in cases down the road. At least 12 states have hit a pause on their reopening plans hoping to contain the spread. 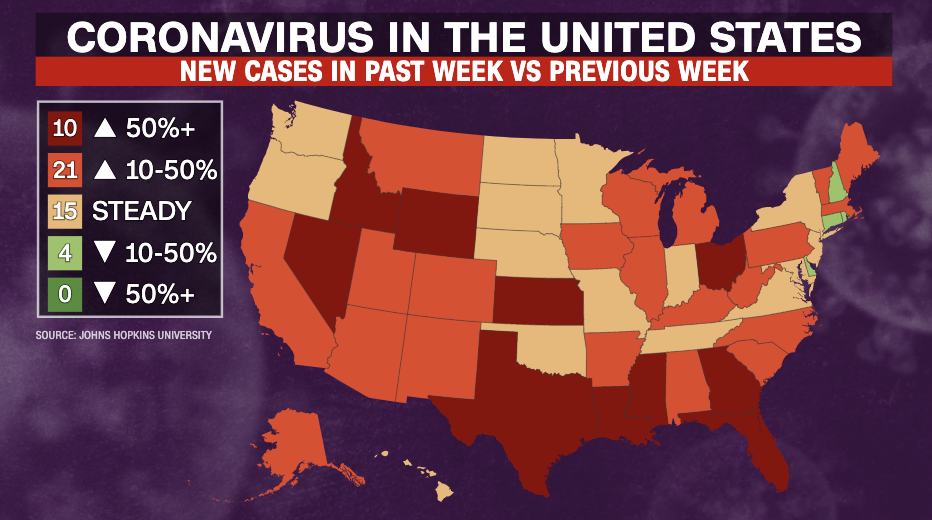