Broadway performances in New York City will be suspended through the rest of the year due to Covid-19, the Broadway league announced in a press release.

The league is offering refunds and exchanges for tickets purchased for all performances through Jan. 3, 2021, it said.

"Every single member of our community is eager to get back to work sharing stories that inspire our audience through the transformative power of a shared live experience. The safety of our cast, crew, orchestra and audience is our highest priority and we look forward to returning to our stages only when it’s safe to do so. One thing is for sure, when we return we will be stronger and more needed than ever," Thomas Schumacher, chair of the board of The Broadway League, said in the release.

The league said returning productions are projected to resume performances over a series of rolling dates in early 2021.

Tickets for next winter and spring performances are expected to go on sale in the coming weeks, they said.

It continues to work with city and state officials as well as leaders in science, technology and medicine “to formulate the best plan to restart the industry.”

The surge in Covid-19 cases in California continues and as state officials take measures to slow the spread of the virus, Ventura County’s public health officer Dr. Robert Levin said the state reopened too quickly.

“I think we did open too quickly in terms of this being purely a virus question. Part of what drove us to open at all and at the rate we did was concerns about getting our economy moving. And of course, one can easily make an argument that having a robust economy is a public health issue as well.”

The US is also witnessing more younger people contracting coronavirus during this surge in cases, and Levin stressed the importance of this information.

“I don't think it's the openings themselves that are so damaging, except that they leave young people and people of other ages with the impression that it's okay. We can be free now. This thing is over,” he said, adding that perhaps the younger demographic more than others is ignoring the continued need for social distancing and quarantine.

“It's important to continue to stay home and to not go out for frivolous reasons.”

Levin also expressed concern about the growing number of cases despite California being early to issue a stay-at-home order at the onset of the pandemic to get it under control.

“One month ago, we were having 20 hospitalized patients due to Covid across our county pretty much on a daily basis. The most recent report has us in the high 60s. This is a dramatic thing, and I can't help but be very concerned about it.”

Earlier in this pandemic, scientists didn’t know how easily this new virus spreads between people without symptoms, nor did they know how long infectious particles could linger in the air. There was also a shortage of N95 respirators and face masks among health care workers who were quickly overwhelmed with Covid-19 patients.

But since then, the CDC, the US Surgeon General and other doctors have changed their recommendations and are now urging the widespread use of face masks.

The CDC now says the public needs to “cover your mouth and nose with a cloth face cover when around others.”

“Everyone should wear a cloth face cover when they have to go out in public, for example to the grocery store or to pick up other necessities,” the CDC said.

Scientists have made many recent discoveries about this new coronavirus, including:

In other words, it’s not just people who are sneezing and coughing who can spread coronavirus. It’s often people who look completely normal and don’t have a fever — and that could include you.

If 95% of Americans wore face masks in public, it would save more than 33,000 lives by October 1, according to projections from the University of Washington’s Institute for Health Metrics and Evaluation.

CNN has been answering your questions about coronavirus throughout the pandemic. You can read more answers —organized by topic and searchable by keyword — here.

Verdi on Sunday called for workers to strike for 48 hours starting Monday, in order to protest the safety at Amazon fulfillment centers amid recent coronavirus infections. In Bad Hersfeld, Germany, the union said at least 30 to 40 workers have been infected.

“Amazon has so far shown no insight and is endangering the health of employees in favor of corporate profit,” said Verdi representative Orhan Akman.

Verdi also wants Amazon to recognize regional wage agreements for the retail sector. “If the company thought we were going to leave it alone because of the coronavirus pandemic, it was wrong,” said Verdi.

Amazon confirmed the strike in a statement saying the majority of associates were not participating and there was no impact on customer orders.

“The fact that more than 8,000 of our over 13,000 permanent associates in Germany are with us for more than 5 years proves that we are a fair employer. Everything the union demands is already in place: Wages at the upper end from what is paid for similar jobs, career opportunities and a safe working environment,” said an Amazon spokesperson in Germany.

The strikes are taking place in Leipzig, Bad Hersfeld which has two fulfillment centers, Rheinberg, Werne and Koblenz.

The Florida Department of Health is reporting 5,266 additional coronavirus cases, bringing the state total to 146,341, according to data released by the state on Monday.

The number is down from the weekend's record-breaking daily totals:

Here's a look at daily news cases in the state over the past two weeks: 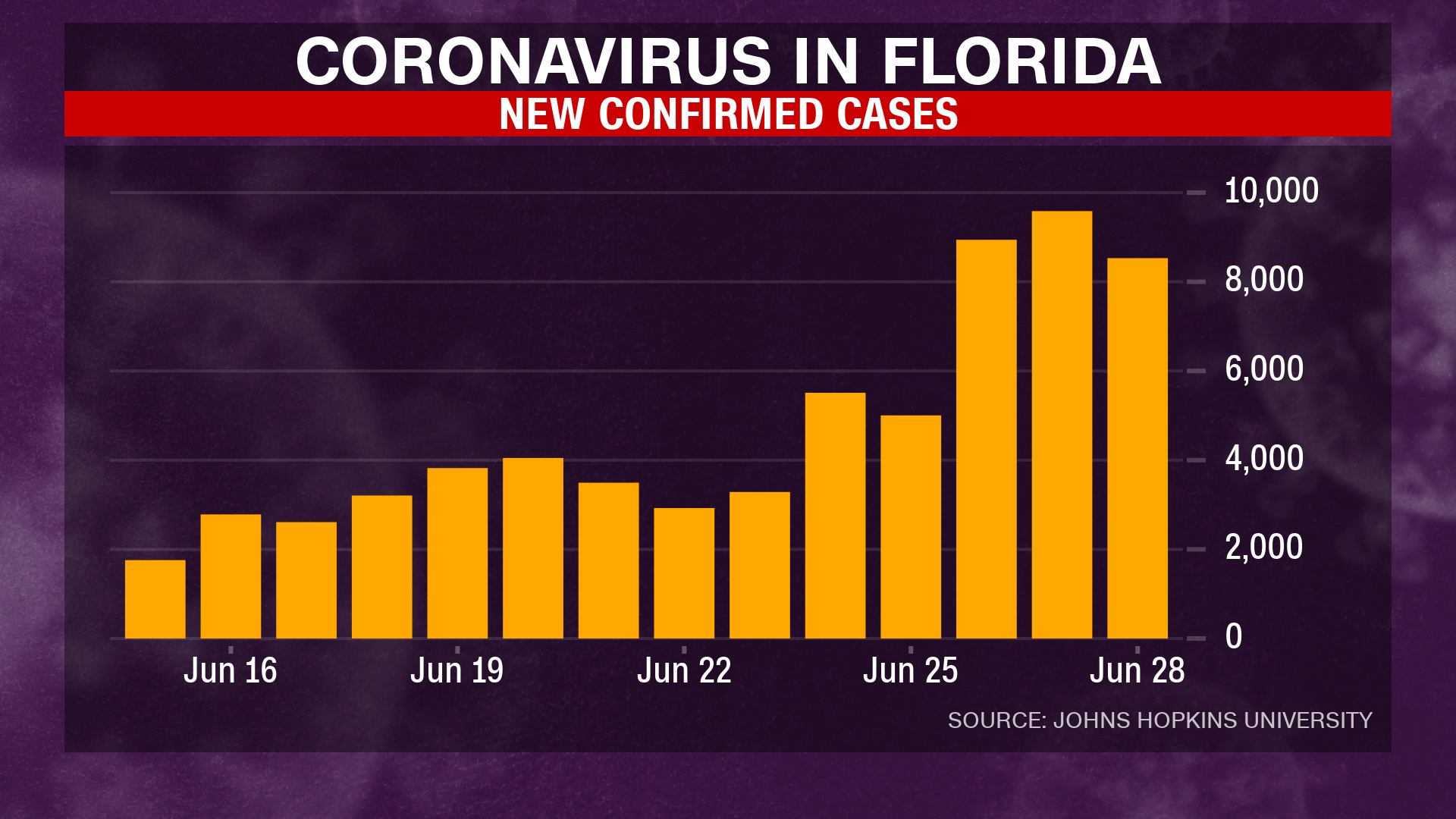 The joint statement — signed by deans at numerous prestigious colleges and universities, including Harvard, Princeton and Yale — sends the signal that students’ academic work will be evaluated in the context of the obstacles created by the pandemic.

The statement emphasizes that students’ focus should be on self-care, care for others, promoting equity, balance and meaningful learning. It was sponsored by the Making Caring Common project at the Harvard Graduate School of Education.

“No student will be disadvantaged because of a change in commitments or a change in plans because of this outbreak, their school’s decisions about transcripts, the absence of AP or IB tests, their lack of access to standardized tests (although many of the colleges represented here don’t require these tests) or their inability to visit campus. We will also view students in the context of the curriculum, academic resources, and supports available to them” the statement reads.

The college admission deans call on students to share how they have been impacted by the pandemic, and to highlight ways in which they have provided service to others and their families during this turbulent time in their applications.

The statement also makes clear that students will not be penalized for not being able to engage in extracurricular and summer activities.

“We now have to go ahead in this budget and put a billion dollars of labor savings. Hopefully we can find a way with labor to avert layoffs, it’s not a given, but if we cant find a way then October 1 is when that would begin.”

What's this about: Last week, Mayor Bill de Blasio said that New York City might have to cut as many as 22,000 municipal jobs to help cover a massive budget shortfall due to the coronavirus.

“The New York City story is pretty damn good” when it comes to the “comeback,” he said.

What the numbers say: The daily number of people admitted to hospitals in New York City for Covid-19 is at 51, under the 200 threshold. The number is up but not a “huge amount” de Blasio noted.

The daily number of people in hospital ICU’s is at 297, under the 375 threshold.

The percent of people who tested positive for Covid-19 is at 2% — under the 15% threshold.

New York City will reexamine and possibly pause indoor dining, which had been set to resume next week in phase three of reopening, Mayor Bill de Blasio said.

The decision comes as coronavirus cases continue to rise across the US.

The rest of phase three is moving on pace for next Monday, July 6, de Blasio said, “but the indoor dining element is now in question.”

He added that it may be paused or modified and there will be more to come in the next few days.

What is “clearly working” is outdoor dining, de Blasio said, adding “we want to double down on outdoor dining.” The city will be reaching out to every restaurant that has not yet applied to help foster this progress.

De Blasio also announced today that barbecue areas in parks will be open for this coming July 4 weekend.