US stocks rebounded dramatically in the second quarter of the year, bouncing back from historic losses in the first three months of 2020.

The Dow recorded its best three-month gain since the first quarter of 1987, climbing 17.8%.

The Nasdaq Composite climbed 30.6% in the quarter, its best performance since the last three months of 1999.

What is happening: Optimism over the reopening of the economy and unprecedented stimulus from the government and the Federal Reserve has boosted the market in the recent months, even as Covid-19 infections are on the rise again and economists worry about a second shutdown.

All three indexes also finished June in the green.

Delaware Gov. John Carney announced he is closing bars at Delaware beaches ahead of the Fourth of July weekend due to an increase in coronavirus cases in the state.

Bars in beach communities will be closed indefinitely starting at 8 a.m. on Friday, Carney announced at a news conference on Tuesday.

“Since early to mid-June to where we are today, just the complacency that we see, mostly in younger folks, particularly those who are enjoying our beaches and the social activities after returning from the beaches…that’s of concern and the main reason that we’re going to stay in phase two,” the governor said.

Coronavirus case data shared at the news conference indicated that the state is seeing an increase in the percentage of positive coronavirus cases at the beach, a main point of concern for the governor.

Carney said the government is going to delay moving into phase three across the state until they get a better handle on where the surge is coming from and make sure there is extensive testing to support moving forward into the next phase of reopening.

California Gov. Gavin Newsom plans to announce more restrictions for Californians as coronavirus cases swell in the state. The governor has repeatedly promised that reopening the state comes with the ability to "toggle back" if necessary.

Today, Newsom said more announcements regarding restrictions and enforcement will come tomorrow. California is among at least 17 states that have paused or rolled back their reopening plans in response to a rise in new infections. On Sunday, the governor shut bars back down across seven counties and recommended their closure in several more.

Responding to a reporter's question about the beaches being closed in Los Angeles County for the Fourth of July weekend, the governor hinted that state beaches could be part of his announcement tomorrow.

As the holiday weekend looms, Newsom warned that family gatherings are of the greatest concern around the spread of coronavirus in the state.

Family gatherings where households mix with extended family, tend to be a place where people let their guard down, the governor said. “It’s not just bars, not just out in the streets with people protesting, and the like,” Newsom said.

Acknowledging that family gatherings are part of the holiday tradition, he insisted that directives will be more aggressive as they relate to face coverings and physical distancing.

“We bent the curve in the state of California once. We will bend the curve again. Mark my words. We will crush this pandemic. We will annihilate it. We will get past this, but we’re gonna have to be tougher,” Newsom said.

North Carolina is reporting 64,670 positive cases of coronavirus and 1,343 deaths in the state since the pandemic began, Mandy Cohen, North Carolina Health and Human Services (NCDHHS) secretary, said during a news conference today.

NCDHHS said the number of new cases is down from Monday.

There are 908 people hospitalized and 910,033 have been completed, according to NCDHHS.

Cohen said contact tracing is ramping up, but there are a lot of challenges with getting people to pick up the phone and to talk to NCDHHS.

“We have to work on that communication and that trust, and we're going to continue to do that,” Cohen said.

As Florida reports increasing coronavirus cases, Gov. Ron DeSantis today said the state has robust testing and "hospitals have a lot of capacity."

Speaking at a news conference today, the governor said Florida is "well positioned to be able to handle what comes down the pike."

He also said Florida would not be "closing things" — days after the state suspended on-premise alcohol consumption in bars after Florida reported record coronavirus case counts.

“We’re not going back, closing things," DeSantis said today. "I don’t think that, that really is what’s driving it. I mean, people going to business is not what’s driving it. I think when you see the younger folks, I think a lot of it is just more social interactions and so that’s natural,” added DeSantis.

Regarding the younger population, DeSantis emphasized that some people could have mild or no symptoms. “You have a responsibility not to come into close contact with folks who could be more vulnerable,” he added.

The latest numbers: The Florida Department of Health reported more than 6,093 additional coronavirus cases today, bringing the state total to more than152,000. The state recorded its highest daily total on Saturday with more than 9,500 new cases. 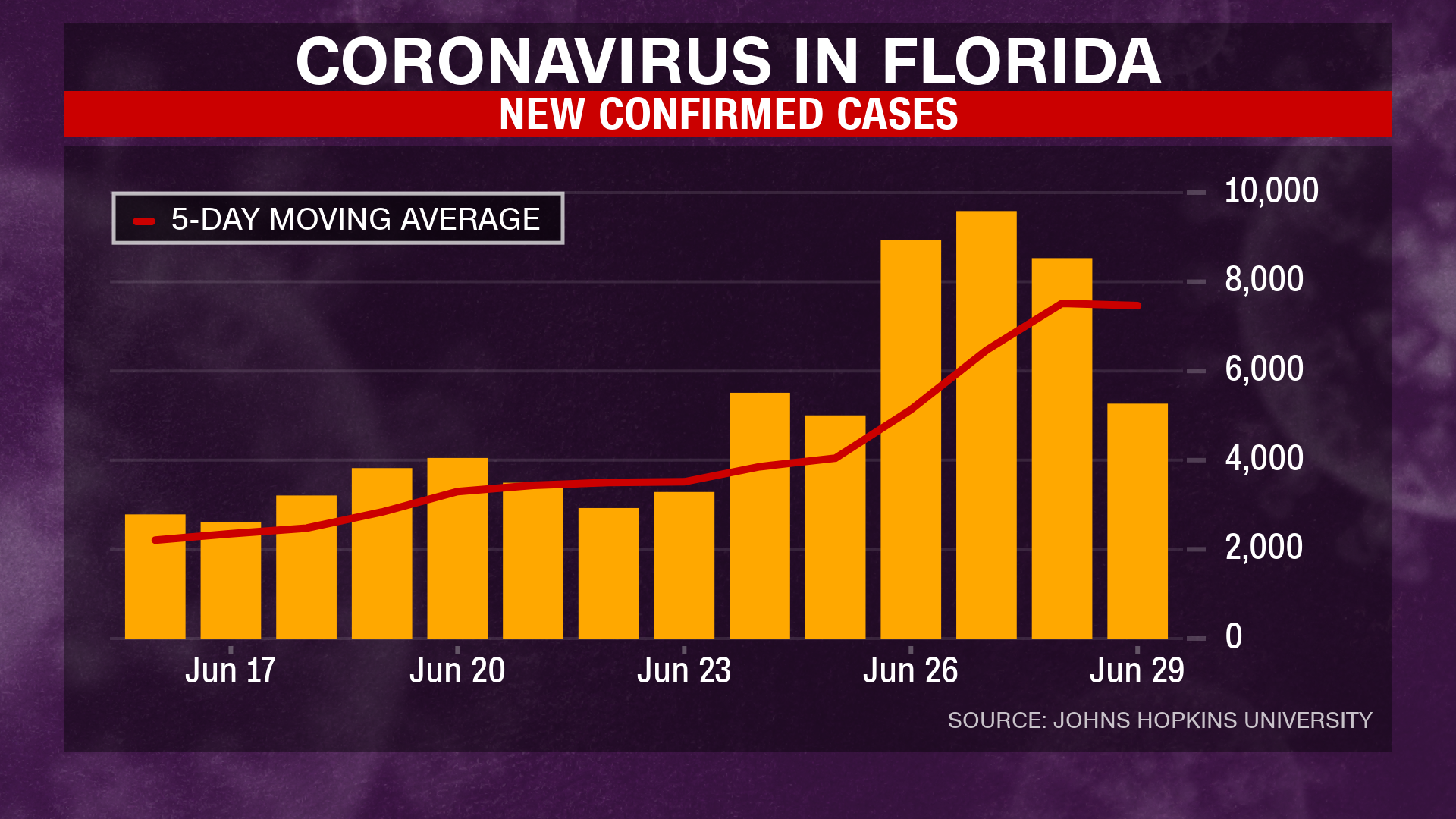 NBA team the Denver Nuggets have temporarily shut down their practice facility, the Pepsi Center in Denver, Colorado, following two positive Covid-19 tests from members of the squad and staff.

A team spokesperson tells CNN that the Nuggets closed the facility as a precaution.

The Nuggets are set to leave for Orlando, Florida, next Tuesday ahead of the NBA’s restart to the season.

First reported by ESPN’s Adrian Wojnarowski, the facility closed on Saturday after the two positive tests were revealed among the 35-person contingent that plans to travel to Orlando.

The team spokesperson would not comment on how many in total or whom within the Nuggets franchise have tested positive for coronavirus since the pandemic outbreak.

Asked today about timing for another Covid-19 relief bill, Senate Majority Leader Mitch McConnell said senators will address a potential additional package when they return in July before the August recess.

He told reporters the next Covid-19 bill will focus on kids, jobs and health care.

McConnell, speaking at a news conference, reiterated that no stimulus bill will pass without liability protection, and not just for businesses, but for universities, doctors, nurses and schools as well.

He also pushed his pro-mask message, saying, “Put on a mask, it’s not complicated.”

US vaccine maker Inovio said on Tuesday that its coronavirus vaccine already has shown some positive early data in a Phase 1 trial. However, the company released few details, and the preliminary information was shared in a press release, not a peer-reviewed publication.

The company said that 94% of people in the Phase 1 trial demonstrated overall immune responses by six weeks after receiving two doses of the vaccine INO-4800 and by eight weeks, the vaccine regimen was found to be safe and well-tolerated with no serious reactions.

There were 40 healthy adult volunteers, ages 18 to 50, in those preliminary analyses, the company noted. Since then, the Phase 1 trial has been expanded to include older adults in additional cohorts and there are plans to launch a Phase 2/3 trial this summer.

The vaccine is among those selected to be part of the US government's Operation Warp Speed, a national program aimed at delivering a Covid-19 vaccine to the nation by next year.

"We are very encouraged by the positive interim safety and preliminary cellular and humoral immune response results to date as well as the inclusion of INO-4800 in Operation Warp Speed," Dr. J. Joseph Kim, president and CEO of Inovio, said in the company's announcement.

"We look forward to urgently advancing INO-4800, as it is the only nucleic-acid based vaccine that is stable at room temperature for more than a year and does not require to be frozen in transport or for years of storage, which are important factors when implementing mass immunizations to battle the current pandemic," Kim said in part.

More about the trial: The Phase 1 clinical trial of INO-4800 enrolled volunteers across two US locations who were assigned to either a 1.0 mg or 2.0 mg dose group— and in those groups, each participant received two doses of INO-4800 four weeks apart, the company said.

Some participants said they experienced redness where the vaccine was injected into their skin, but "there were no reported serious adverse events," Inovio's announcement said.

There are at least 2,612,259 cases of coronavirus in the US, and at least 126,512 people have died, according to Johns Hopkins University's tally of cases.