California cities struggling with the spread of coronavirus are being encouraged to cancel their upcoming Independence Day fireworks shows in an effort to eliminate crowds, Gov. Gavin Newsom announced today in a news conference.

The cancellation of some major fireworks shows has already been done in Los Angeles and San Francisco.

Newsom also warned again of family gatherings over the Fourth of July weekend, saying that while the holiday is typically time for festive barbecues, inviting extended family from outside of your household should be reconsidered.

“I deeply respect people’s liberty, their desire to go back to the way things were,” the governor said, “but I cannot impress upon you more, our actions have an impact on other people.”

Newsom compared mask wearing to using a helmet while on a motorcycle or a seat belt in a car.

President Trump said that he would have “no problem” wearing a face mask in public, claiming he is “all for masks” in an interview on Fox Business Wednesday.

Trump said that he didn’t believe making masks mandatory across the country was necessary, but claimed that he is “all for masks” and that he “thinks masks are good.” The Trump administration has consistently said mask mandates are up to state and local leaders.

Asked by Fox Business’ Blake Berman on whether he would wear a mask, Trump said: “Oh I would. I have. I mean people have seen me wearing one. If I’m in a group of people where we’re not 10 feet away — but usually I’m not in that position and everyone’s tested.”

Trump then claimed that he would “have no problem” with the public seeing him wearing a mask — despite months of refusing to wear a mask in public while not observing social distancing.

“I mean I’d have no problem. Actually I had a mask on. I sort of liked the way I looked. It was ok. It was a dark, black mask and I thought it looked okay. It looked like the Lone Ranger. But no, I have no problem with that. I think and if people feel good about it they should do it," Trump said.

In the interview, Trump also added that he still believes coronavirus will “disappear” someday.

“We’re headed back in a very strong fashion… And I think we’re going to be very good with the coronavirus. I think that at some point that’s going to sort of just disappear. I hope,” Trump said in the interview while talking about the economy.

Asked if he actually believes the virus will still disappear, Trump said, “I do. I do Yeah sure. At some point. And I think we’re going to have a vaccine very soon too.”

Trump says he is 'all for masks'

Access to California's state beaches will be restricted for the upcoming holiday weekend, Gov. Gavin Newsom announced in a news conference today. The beaches themselves will not be closed, but rather parking lots and facilities will be.

Closures have already been announced at county beaches in Los Angeles, Orange, and Ventura.

The measure is part of wider restrictions announced today by Newsom in an effort to curb the spread of Covid-19 in the state.

Cases in California continue to skyrocket, reaching 9,740 in a single day —by far the highest recorded in the state since the beginning of the pandemic, according to data from the California Public Health Department.

The Austin City Limits Music Festival is canceled for this year, according to a statement on the festival website.

"The health and safety of our fans, artists, partners, staff and the entire Austin community remains our highest priority," the statement read. It will return to Austin in 2021 for the 20th anniversary of the festival.

"Few events are rooted in – & embody - the soul of this city like ACL Fest & their hard decision for the greater good is applauded," Austin Mayor Steve Fisher tweeted. "While the show won’t go on this year, there are many ways to support local musicians while we all look forward to the 20th Anniversary next year."

The statement says that tickets purchased for this year's festival, which was scheduled to take place over two weekends in October, will be honored next year. Refunds are being offered to the fans who are unable to attend the 2021 dates.

The 2018 festival brought in $264.6 million, according to an economic impact report commissioned by the festival. The 2019 data has not been released as of July 1.

ACL Fest attracted 450,000 festival goers in 2018, according to C3 Presents, which puts on the annual festival.

Pennsylvania Gov. Tom Wolf announced a new order that requires masks to be worn whenever anyone leaves home, a measure he said is “essential to stopping the recent increase in Covid-19 cases” seen recently in the state.

“Those hot spots can be traced to situations where Pennsylvanians were not wearing masks or practicing social distancing – two practices that must be adhered to if we want to maintain the freedoms we have in place under our reopening," Wolf said.

Some context: The order, signed by Secretary of Health Dr. Rachel Levine, takes effect immediately, and expands on an April order that requires the wearing of masks in businesses.

Apple announced on Wednesday that it will temporarily close an additional 46 stores across the US due to an uptick in coronavirus cases.

In a statement, the tech giant said that "due to current COVID-19 conditions in some of the communities we serve, we are temporarily closing stores in these areas."

"We take this step with an abundance of caution as we closely monitor the situation and we look forward to having our teams and customers back as soon as possible," the company said.

Apple reopened dozens of its 271 United States stores last month after shutting them because of coronavirus.

California Gov. Gavin Newsom is ordering all indoor activities be halted in counties on the state’s coronavirus "watch list" for increased transmission of the virus.

The governor announced earlier this week that bars, pubs, breweries and wineries that don’t also serve food must close. Restaurants may remain open for take out meals.

These restrictions will remain in place for at least three weeks, Newsom said. 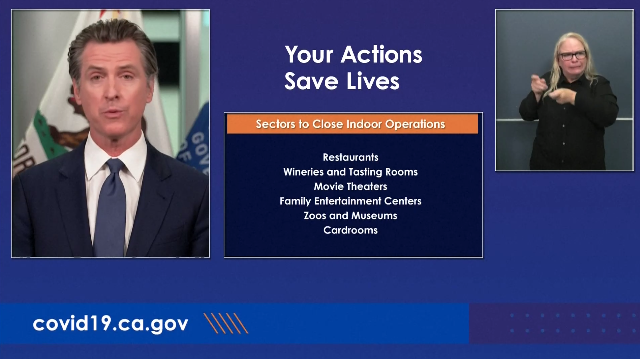 All Orange County bars, pubs, breweries, and brewpubs that do not offer sit-down and dine-in meals are ordered to close effective Thursday due to the rise in coronavirus cases, the OC Health Care Agency announced Wednesday.

The revised order is effective until further notice. For bars, pubs, breweries, and brewpubs that offer sit-down and dine-in meals, alcohol can only be sold in the same transaction as a meal.

They must also follow the state dine-in restaurant guidance and continue to encourage takeout and delivery service whenever possible.

Gov. Gavin Newsom said Monday that Orange County had been added to the state Department of Public Health's watchlist due to increasing percentages of positive coronavirus tests.

The security checkpoint at the Atlanta airport’s main terminal is currently closed for cleaning after an employee there tested positive for the coronavirus, according to the Transportation Security Administration.

TSA spokesperson Mark Howell said the Domestic Main checkpoint is expected to reopen either Thursday morning, or possibly later in the day Wednesday, but first must be deep cleaned.

Howell said the situation is causing longer lines than usual at the T North checkpoint.

Because the checkpoint is expected to reopen by Thursday, the situation is not expected to impact holiday travelers this weekend.

Howell said TSA expects to screen about 27,000 people at the airport on Thursday and Friday, which is about 50% more than it has seen recently. The agency is bringing in more employees to work over the holiday weekend because of the higher volumes.

Some context: More than 860 TSA employees nationwide have tested positive for the coronavirus, including at least 29 at Atlanta’s airport.