The Covid-19 vaccine candidate being developed by US pharmaceutical company Pfizer and German biotechnology company BioNTech has yielded positive data in early tests, according to data released by the companies.

The companies announced these preliminary findings on Wednesday in a pre-print paper that shows participants in a Phase 1/2 study of the vaccine, called BNT162b1, responded to the immunization and it was found to be well tolerated. The Phase 1/2 study is ongoing. The data has not yet been published in a peer-reviewed medical journal.

"These clinical findings for the BNT162b1 RNA-based vaccine candidate are encouraging and strongly support accelerated clinical development and at-risk manufacturing to maximize the opportunity for the rapid production of a SARS-CoV-2 vaccine to prevent COVID-19 disease," the researchers wrote in the pre-print paper, which was sponsored by BioNTech and designed by Pfizer.

How the study was conducted: For the initial study, 45 participants ages 18 to 55 were randomly assigned to either receive a certain dose of the vaccine or placebo.

In the seven days following injection of the vaccine, some participants who received a dose reported pain in the injection site, fever or sleep disturbances, but "no serious adverse events were reported," according to the paper.

"These preliminary data are encouraging, showing that BNT162b1 which exploits RBD SARS-CoV-2 as a target antigen is able to produce neutralizing antibody responses in humans at or above the levels observed in convalescent sera – and that it does so at relatively low dose levels. We look forward to providing further data updates on BNT162b1," Dr. Ugur Sahin, CEO and co-founder of BioNTech, said in a company press release on Wednesday.

Pfizer and BioNTech announced on Wednesday that this preliminary data will help them determine a dose level for the vaccine then select which of their multiple vaccine candidates to progress to a larger-scale global Phase 2/3 study, possibly beginning as early as this month.

He said that people at the pools will be required to wear face coverings when not in the water. He said that the pool experience is going to be different but "it'll all be worth it."

Here are the pools that will be opening in NYC in the coming weeks: 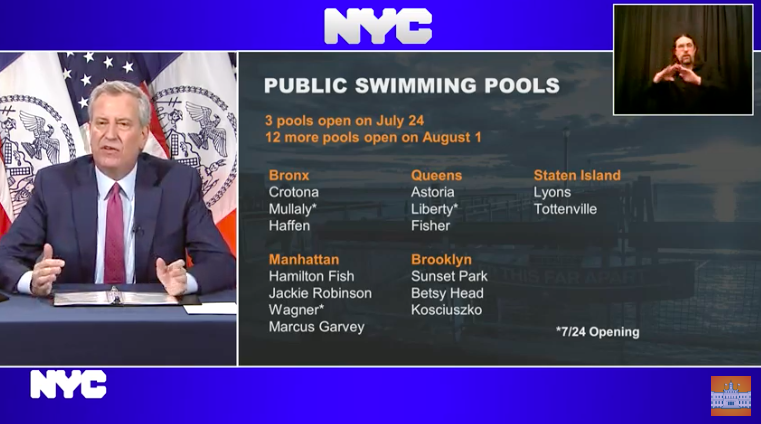 "It is not the time to forge ahead with indoor dining," de Blasio said at a news conference.

Restaurants were set to resume indoor service on Monday as the city enters its third phase of reopening. De Blasio did not say when indoor dining will resume in the city.

The mayor said outdoor dining — which began last week — will continue. He said he is "very convinced" New Yorkers can help restaurants survive by dining outside.

"Outdoors is working — period," he said.

At least 15,000 policemen have been infected with Covid-19 and 243 have died since the pandemic began in Peru, according to the country’s Interior Minister Gastón Rodríguez

Of the 15,000 affected by the virus, 6,000 have since recovered and returned to work while 289 remain in hospital, Rodríguez told journalists on Monday afternoon.

The state of emergency in the country has been extended until July 31 while lockdown’s conditions have changed since Wednesday. While most of Peru including its capital Lima is now under what is called a "localized lockdown," 7 of Peru’s 24 regions remain under a "general" and stricter lockdown.

The South American country was one of the first countries in the region to impose a state of emergency and lockdown in order to fight the pandemic.

Austin Mayor Steve Adler said the Texas capital has about two weeks to stem the tide of rising coronavirus cases, and the “messaging war” between state and national leaders could lead to potentially devastating consequences.

We have literally two weeks, if that, to be able to change the trajectory we're on, or we're going to be set at a place that overwhelms our hospitals,” he said to CNN’s Jim Sciutto.

“It's that kind of messaging, it's the messaging also coming out of Washington that's really making for one of our most significant challenges and problems,” Adler said.

“The messaging coming from our lieutenant governor and from Washington is that there isn't a problem, that we shouldn't be wearing masks. It creates a confused message for my community,” Adler said, adding that “this messaging war that we're on right now is not helpful.”

California, the most populous US state and the first to implement a statewide lockdown to combat the coronavirus outbreak, continues to set records in cases.

The governor of the Golden State, who ordered bars in seven counties to close over the weekend, said he will announce more restrictions today.

The state currently has the second highest number of cases in the country with more than 222,000 coronavirus cases — about half of which are in Los Angeles County. On Tuesday, the state announced 6,367 cases, the second highest total for the state since the pandemic began.

Here is how California's cases and deaths compare to other states: 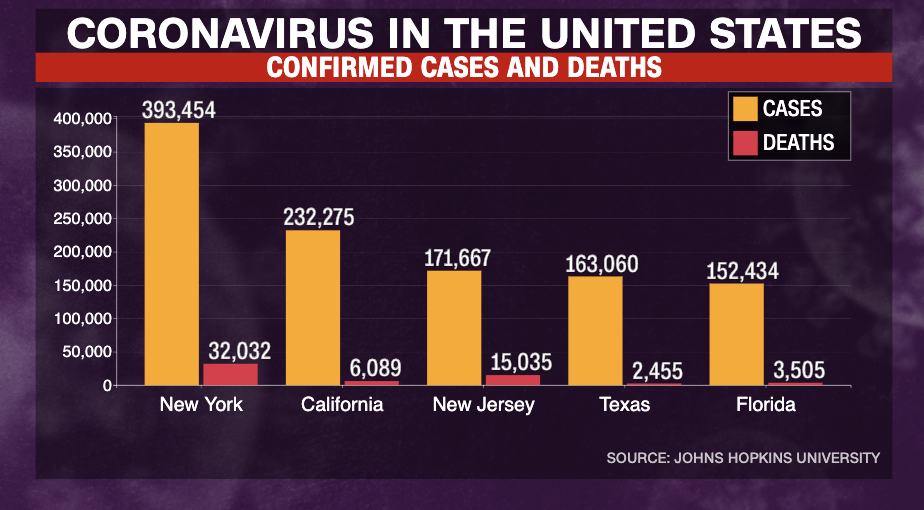 Here is how California and New York compare in total confirmed cases: 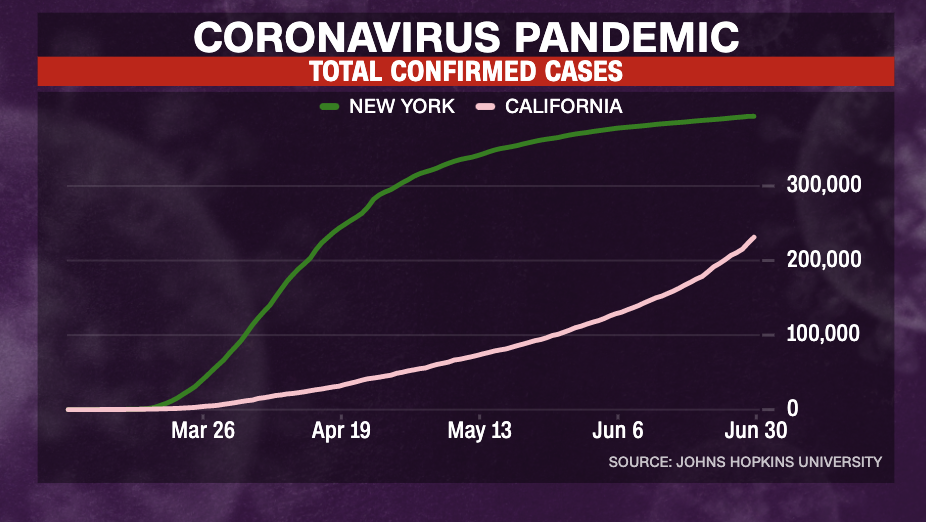 Los Angeles County has especially been hard-hit. Here is how the county's cases compare to other parts of the state: 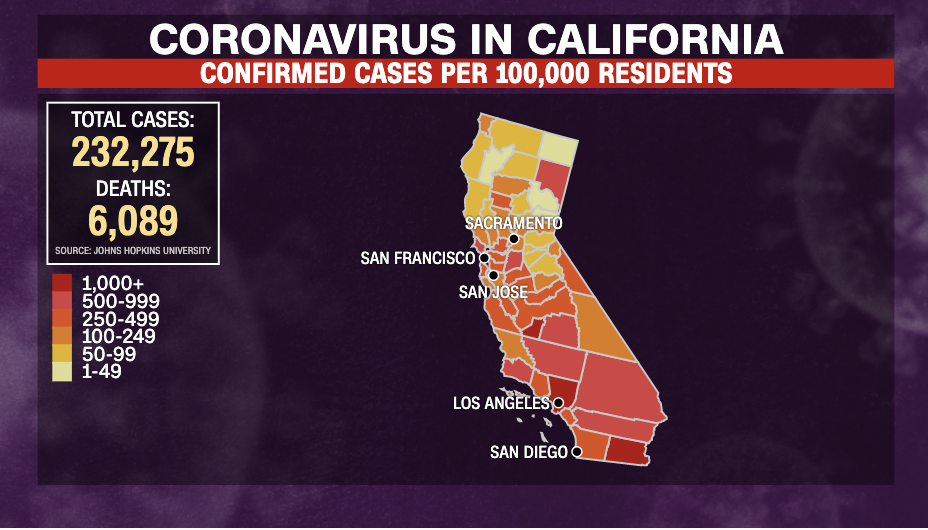 US stocks bounced higher today on reports that drug maker Pfizer reported “positive data” from a Covid-19 vaccine trial, which led futures to turn positive just ahead of the opening bell.

Remember: It’s a shortened trading week, with the stock market closed for the Independence Day holiday on Friday.

Ahead of the end of the week, investors will be focused on the jobs report, as well as jobless claims numbers, which will be released simultaneously tomorrow morning.

Switzerland will introduce mandatory masks on all public transport in the country as of next week, the Swiss Federal Council announces.

This is a step up from mask-wearing during rush-hour, the website of the council says.

Anyone 12 years old and older will have to wear the masks.

Cases have been spiking in Arizona, and last week, Ducey said the state's reopening plans are now “on pause” as a result. Ducey closed bars, gyms, movie theaters, water parks and tubing for at least 30 days.

The latest numbers: Arizona has reported nearly 80,000 cases of coronavirus since the pandemic began and more than 1,600 deaths. 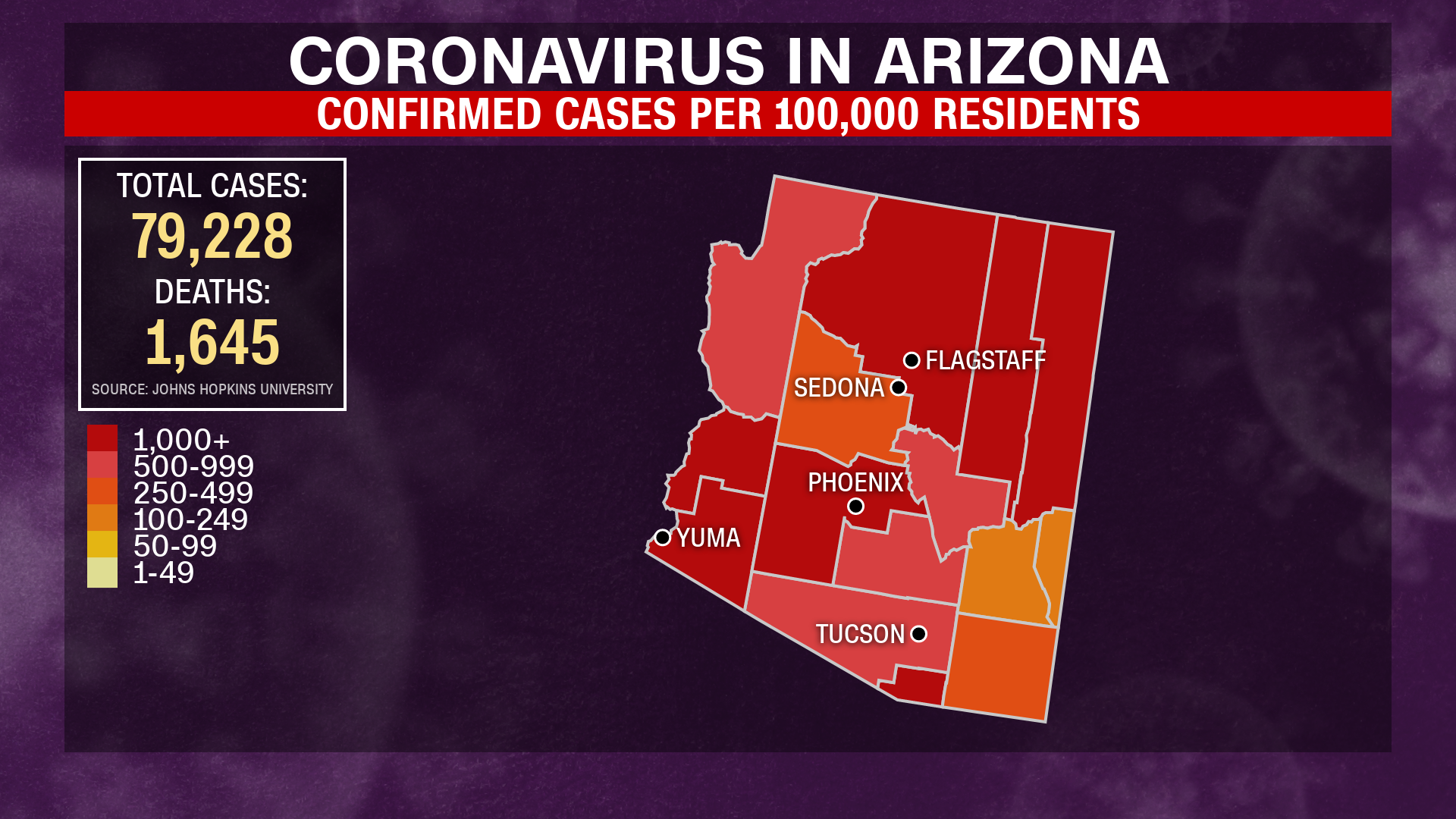 And here's a look at the new daily case counts in the state: 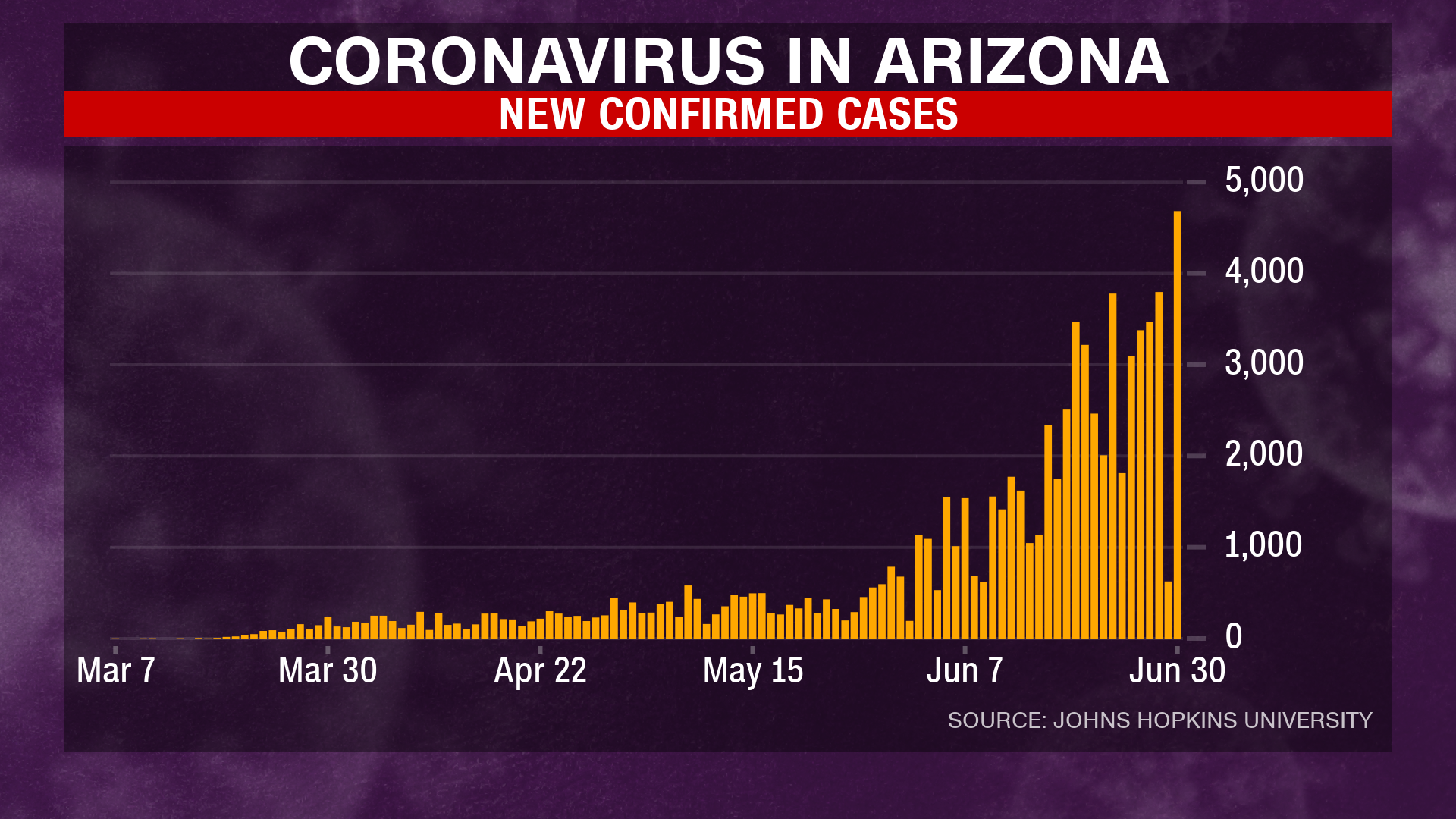