Indianapolis Mayor Joe Hogsett issued a public health order requiring all residents to wear face coverings in public spaces, according to a statement from his office.

The mandate requires residents to wear face masks indoors and outdoors when in public spaces, according to the statement.

“This isn’t complicated. It’s a piece of cloth that could save your life and the lives of those around you. It is the right thing to do,” Hogsett said.

The order will go into effect July 9.

A global study has found clear evidence that a new form of the coronavirus has spread from Europe to the US. The new mutation makes the virus more infectious but does not seem to make people any sicker, an international team of researchers reported Thursday.

The mutation affects the spike protein — the structure the virus uses to get into the cells it infects. Now the researchers are checking to see if this affects whether the virus can be controlled by a vaccine. Current vaccines being tested mostly target the spike protein.

The study, published in the journal Cell, confirms earlier work suggesting the mutation had made the new variant of virus more common. The researchers call the new mutation G614, and they show that it has almost completely replaced the first version to spread in Europe and the US, one called D614.

“Our global tracking data show that the G614 variant in Spike has spread faster than D614,” theoretical biologist Bette Korber of Los Alamos National Laboratory and colleagues wrote in their report. “We interpret this to mean that the virus is likely to be more infectious,” they add. “Interestingly, we did not find evidence of G614 impact on disease severity.”

What this means: This could be good news, said Lawrence Young, a professor of medical oncology at the UK’s University of Warwick, who was not involved in the study. “The current work suggests that while the G614 variant may be more infectious, it is not more pathogenic. There is a hope that as SARS-CoV-2 infection spreads, the virus might become less pathogenic,” he said in a statement.

About the study: The team tested samples taken from patients across Europe and the US and sequenced the genomes. They compared these genome sequences to what’s been shared publicly. Comparing these sequences helped them draw a map of the spread of the two forms.

“Through March 1, 2020 the G614 variant was rare outside of Europe, but the end of March it had increased in frequency worldwide,” they wrote.

Even when the D614 form had caused widespread epidemics, in places such as Wales and Nottingham in England, as well as in Washington state, G614 took over once it appeared, they found.

“The increase in G614 frequency often continues well after stay-at-home orders are in place and past the subsequent two-week incubation period,” they added.

The new version seems to multiply faster in the upper respiratory tract — the nose, sinuses and throat – which would explain why it passes around more easily, the researchers said. But tests on 1,000 hospitalized coronavirus patients showed those infected with the new version did not fare any worse than those who caught the original strain.

Other mutations often go along with the G614 mutation, but it’s not clear what effect they have. “The earliest sequence we detected that carried all 4 mutations was sampled in Italy on Feb. 20,” they wrote. “Within days, this haplotype was sampled in many countries in Europe.

The G614 mutation can be neutralized by convalescent serum – the blood product taken from people who have recovered from a coronavirus infection, the researchers said.

“But it will be important to determine whether the D614 and G614 forms of SARS-CoV-2 are differentially sensitive to neutralization by vaccine-elicited antibodies or by antibodies produced in response to infection with either form of the virus,” they added.

More work is needed, of course, to solidify the findings and to see what the changes mean for the epidemic and for patients, the researchers said. 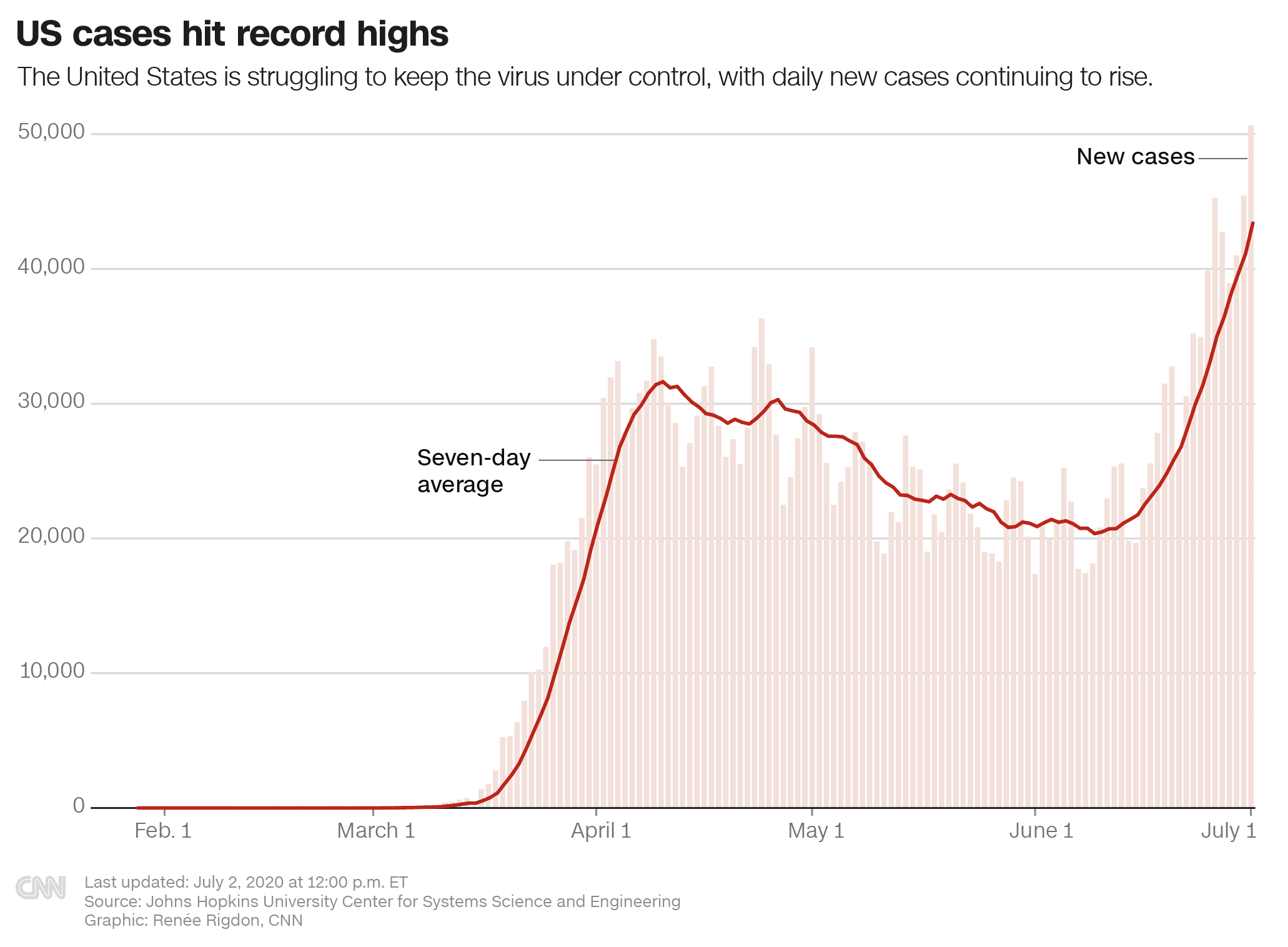 Former 2012 Republican presidential candidate Herman Cain has been diagnosed and hospitalized Wednesday with Covid-19, according to his employer Newsmax and an official statement posted on Cain's Twitter feed.

Cain, as a co-chair of Black Voices for Trump, was one of the surrogates at President Trump's June 20 rally in Tulsa, Oklahoma.

"We are sorry to announce that Herman Cain has tested positive for COVID-19, and is currently receiving treatment in an Atlanta-area hospital," the tweet from Cain's account reads.

Cain tested positive for Covid-19 on June 29 and was hospitalized on July 1 after developing symptoms serious enough to be hospitalized, according to the statement posted on Twitter.

He spent the night in an Atlanta-area hospital and is "awake and alert," according to the statement.

Paris Dennard, pictured smiling right behind Cain in a picture on Cain's Twitter page from Trump's Tulsa rally, told CNN he has not been informed about Cain's positive diagnosis nor his hospitalization.

"No, I have not been informed," said Dennard, who is an adviser for Black media affairs at the Republican National Committee. "I have not seen the reports about Herman Cain."

Dennard said he himself has not been tested for coronavirus since the Tulsa rally because he has "exhibited zero symptoms" and is regularly wearing a face covering.

After interacting with several colleagues who later tested positive, all of Trump's campaign staffers who attended his Tulsa rally quarantined the following week, CNN previously reported.

CNN has reached out to the Trump campaign for comment.

Cain is a contributor for Newsmax, a conservative media outlet. According to the outlet, Cain is doing well and is not on a ventilator.

Europe is facing "the most difficult situation in its history'' due to the coronavirus crisis, with the pandemic testing the continent's ability to "stick together," German Chancellor Angela Merkel said in a joint video-press conference with European Commission President Ursula von der Leyen.

Speaking from Berlin on Thursday, as Germany resumed the Presidency of the European Union Council for the next six months, Merkel warned that the pandemic was "far from over" and that "we see every day that the virus is not gone."

Von der Leyen, speaking from Brussels, said that ''the launch of the German presidency came "at a crucial time,'' adding that ''the next six months will determine the future of Europe."

She called on EU member states to reach quick agreement on the 750 billion euro ($827 billion) recovery fund to counter the economic consequences caused by the coronavirus crisis, saying that the EU was "under extreme time pressure" and that "every day counts.''

More on this: The alliance will discuss the financial rescue plan at an extraordinary summit on July 17 and 18. However, the volume, financing and type of aid are still being disputed among the 27 member states. In addition to the coronavirus crisis, the summit will also deal with topics such as climate protection, digitalization and migration.

Traveling with Georgia Gov. Brian Kemp on the "Wear a Mask" fly-around tour of the state ahead of the holiday weekend, US Surgeon General Jerome Adams said a mask is “an instrument of freedom if we all use it to slow the spread of Covid-19.”

“The fact is most people actually agree with wearing a mask, and if you look at surveys most people are doing it when they go out in public, but if you turned on the news you’d think nobody was wearing a face covering,” said Adams while speaking in Augusta, Georgia.

“Right now the best advice that we have based on what we know about asymptomatic spread is that everyone in public should be wearing a mask or a face covering to protect those around you,” he said.

Adams also spoke about the importance of vaccinations. “Vaccine hesitancy is a real concern in our country,” he said.

Hartsfield-Jackson Atlanta International Airport will be taking extra measures for the safety of all passengers after a Transportation Security Administration employee tested positive for coronavirus, the airport's General Manager John Selden said.

All lanes at the main checkpoint have been sterilized out of an abundance of caution, he said.

Selden said they are doing everything they can to keep travelers safe and secure heading into the Fourth of July weekend, including nightly deep cleaning and providing masks for anyone who needs one. The airport has 4.7 million masks available to distribute, he said.

All airport employees are subject to temperature checks and required to wear masks, Selden said. Social distance stickers have also been placed throughout the airport, he added.

Amid the spike of Covid cases in Los Angeles, the University of Southern California is now recommending that all undergraduates move to remote learning for the fall semester and reconsider living on campus.

“Given the continuing safety restrictions and limited densities permissible on campus, our undergraduate students primarily or exclusively will be taking their courses online in the fall term, and on-campus housing and activities will be limited,” university senior vice presidents Charles Zukoski and David Wright wrote in a letter to the school community.

“While not what we hoped, we are now recommending all undergraduates take their courses online, and reconsider living on or close to campus this semester. We are continuing with limited in-person, on-campus activity because we believe we can keep students, researchers, staff, and faculty safe with our low-density plan.”

Some background: USC had previously announced it would limit housing to one student per bedroom in all of their residence halls, and the city of Los Angeles has also asked the school to hold vacant rooms throughout the semester to serve as quarantine space, reducing the schools on campus living capacity to less than half of what it normally is.

The school will prioritize students whose course of study requires on campus instruction, are in named scholarship or academic programs, or require extra assistance, as well as international students.