The Texas Department of State Health Services reported 8,258 new cases of Covid-19 in Texas on Saturday — the state's second-highest number of new cases reported in a single day.

Of the new cases reported Saturday, about 1,200 were in Harris County, which includes Houston. Dallas County had 1,085 new cases, according to DSHS.

The highest daily total was set on Wednesday, when the state reported 9,308 cases.

"Wearing a face covering in public is proven to be one of the most effective ways we have to slow the spread of COVID-19," Abbott said in a statement. "We have the ability to keep businesses open and move our economy forward so that Texans can continue to earn a paycheck, but it requires each of us to do our part to protect one another — and that means wearing a face covering in public spaces." 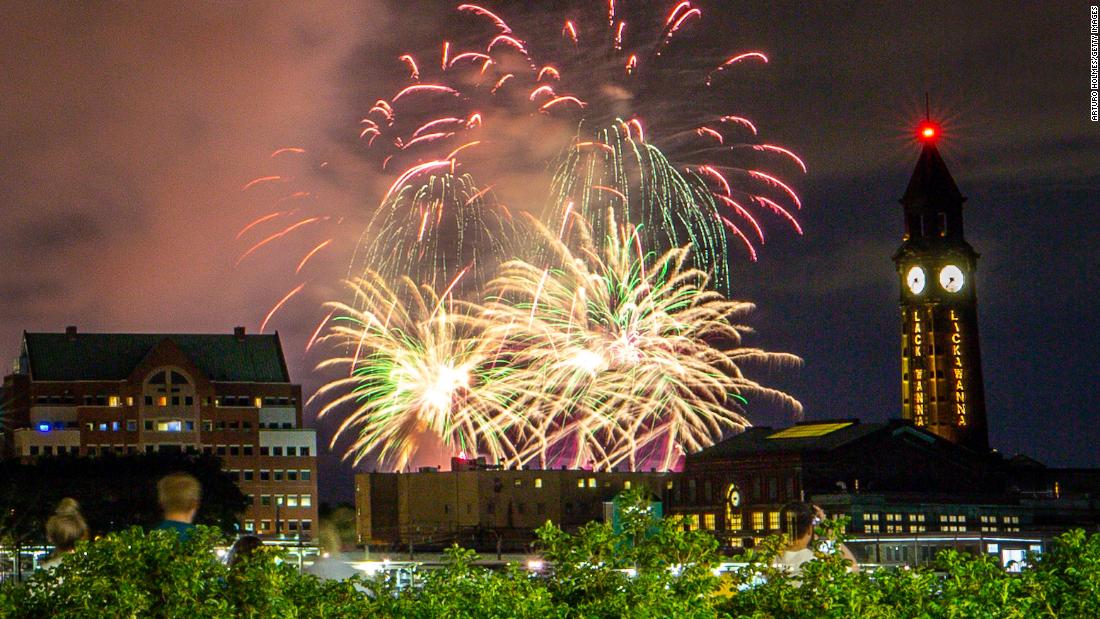 Fireworks are arguably the best part of Fourth of July. But this year, as coronavirus cases rise across many parts of the US, gathering at the park or the beach to watch spectacular shows is more dangerous than usual.

Staying home and lighting your own fireworks if you live in a state where that is allowed and you have the space to do it is the best idea.

But if you'd rather go to the park or beach to watch them, there are a few steps you should take to stay safe:

While this year might look a little different than usual, that doesn't mean you can't enjoy the holiday weekend with friends and family. Just stay safe — not just for you, but for everyone around you.

Huntington Beach in Southern California would normally be jammed towel-to-towel with beachgoers on a July Fourth weekend.

But this year, Los Angeles-area beaches are closed for the holiday as the state continues to see increases in coronavirus cases. Today, the Huntington Beach sat empty:

The comparison is jarring when you look at photos from just a few weeks ago. On June 14, crowds packed Huntington Beach:

Huntington Beach also canceled its annual Fourth of July parade. Instead, the city put on a neighborhood tour — two small 20-vehicle caravans that weaved through the streets with local dignitaries, replicas of famous screen and Volkswagen buses.

The position is temporarily occupied by Army General Eduardo Pazuello, who has no previous medical experience, since the last Health Minister, Nelson Teich, resigned on May 15.

Teich, who spent less than a month in office, left following criticism from President Jair Bolsonaro that he was "too timid in the push to reopen the economy and to advocate for the use of chloroquine." Teich, however, didn't provide a reason for his resignation.

Teich's predecesor, Luiz Henrique Mandetta — who advocated for social distancing measures, the use of masks, and never clearly recommended the use of chloroquine — was fired by Bolsonaro.

Under Pazuello's interim command, more than 20 strategic positions within the ministry have been replaced with military personnel. Nonetheless, the greatest criticism against him came when following Bolsonaro's orders and desire to reduce the negative repercussion of the high death toll, he changed the format of how the data was presented.

After strong domestic and international pressure, Brazil's Supreme Federal Court ruled that data should be presented as before. Despite the continued rise in Covid-19 cases and related deaths, Bolsonaro shows no signs of planning to replace Pazuello any time soon.

With more than 1.5 million confirmed cases and at least 63,174 deaths, Brazil has the second highest number coronavirus cases and deaths globally after the US.

It's the Fourth of July holiday weekend in the US, and some Americans have altered their celebrations as coronavirus cases increase in states across the country.

What's allowed on beaches — a staple of the summer holiday — varies from place to place. While some beaches, like those in New York City, reopened before the holiday, some in hard hit areas, like in Miami and Los Angeles, temporarily closed for the weekend to curb the spread of coronavirus.

Beachgoers were seen walking in Myrtle Beach, South Carolina, this morning, despite rising case numbers in the state.

Beaches were also open for the holiday in New Jersey.

In California, Los Angeles-area beaches closed on Friday and will remain closed until Monday, officials announced earlier this week. Violators could face fines.

The National Park Service did not require employees who worked President Trump's Mount Rushmore event yesterday to get tested for coronavirus, according to NPS spokesperson for the incident management team Dana Soehn.

Soehn said face masks were available to all employees who worked the event and using them was recommended at all times when social distancing could not be maintained.

Some NPS staff were seen wearing masks at the event and others were not.

"The NPS is following CDC guidance for health monitoring of the work force. Park management is taking action based on federal and state guidance and specific conditions at each site for phased reopening. [Department of Interior] employees are encouraged to conduct daily self-monitoring for symptoms of COVID-19 using the CDC symptom webpage or the CDC Self-Checker, and to not report to the workplace if they exhibit any symptoms or feeling unwell. None of the Incident Management Team members for the event have reported exhibiting any symptoms or feeling unwell," Soen said.

About the event: President Trump spoke at the event, mentioning the virus just once, at the very top of his remarks, thanking those working to fight it.

Attendees clustered together in stadium seating in front of a patriotic-themed stage for hours before Trump arrived, and people at the top of the amphitheater sat in rows of folding chairs that were tied together with zip ties — preventing any social distancing.

Major commercial laboratories in the United States are reporting delays in returning Covid-19 test results as the pandemic rages on and case numbers surge in parts of the country.

While the number of tests conducted across the US increases, experts say long turnaround times can make it difficult to isolate confirmed cases and quickly quarantine their close contacts.

Quest Diagnostics, a commercial laboratory, said this week that testing demand has reached “unprecedented levels,” leading to delays. LabCorp, another laboratory, is reporting delays too.

While Quest can provide results in a day for priority patients – including sick health care workers and people in the hospital – the company said its average turnaround time is three to five days for most other patients.

“In our media statement posted June 25, we communicated that we are experiencing surging demand for our COVID-19 molecular diagnostic testing services. We also communicated that this demand is likely to extend average turnaround times for reporting test results near term,” the company said. “Since that statement, we have continued to experience surging demand for these services, with recent daily orders outpacing capacity.”

That is the most current information available from Quest, according to company spokesperson Kimberly Gorode.

LabCorp is now taking one to two days longer to report results, the company told CNN in a statement Saturday. The company’s current turnaround time is two to four days on average.

“In recent weeks, we have seen a steady increase in demand for molecular testing and we are doing everything we can to continue delivering results in a timely manner while continually increasing testing capacity,” LabCorp said.

Many Americans typically mark the Fourth of July with backyard barbecues with family and friends. Those kinds of celebration might look a little different this year because of coronavirus.

Depending on your state, there may be regulations and limits on how many people can attend a social gathering.

Remember that the more people you come in contact with, the higher your risk of getting infected. If you are going to invite people you haven't been isolating with, there are a few precautions you can take to make your cookout safer:

The annual event looked a little different this year because of the coronavirus pandemic. The contest is traditionally held on Brooklyn's Coney Island, at Nathan's famed flagship restaurant. But the 2020 edition took place at an undisclosed dining locale, with social distancing measures in place.

Sudo set the women’s record in her victory, eating a total of 48 1/2 hot dogs in 10 minutes to win the contest for the 7th time.