There are at least 2,897,613 cases of coronavirus in the US and at least 130,007 people have died from the virus in the country, according to Johns Hopkins University's tally of cases.

So far on Monday, Johns Hopkins has reported 8,978 new cases and 60 deaths.

Here is a look at the distribution of confirmed cases per 100,000 residents across the country: 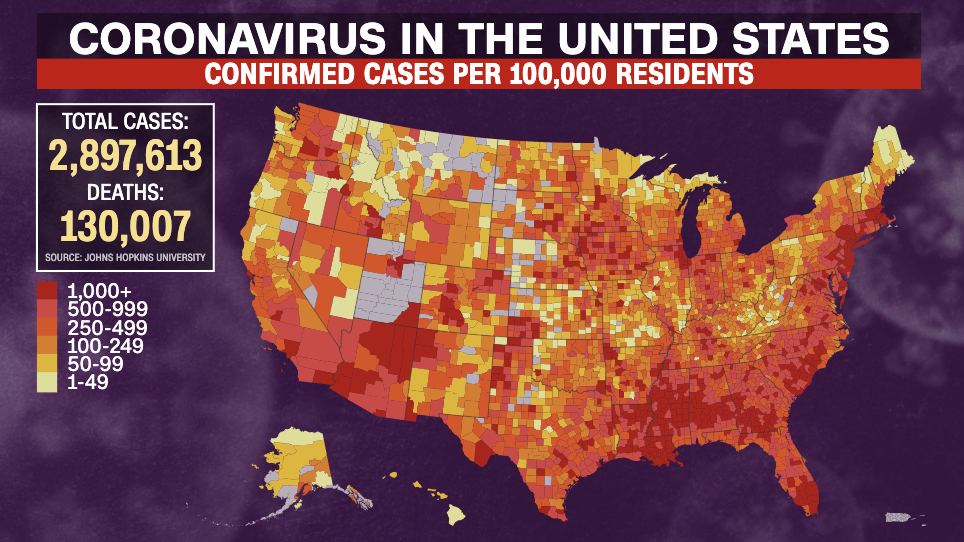 Prescriptions for the anti-malarial drugs chloroquine and hydroxychloroquine skyrocketed in the US from February to March — a time when the drugs, though unproven, were touted as treatments for the coronavirus.

Combining hydroxychloroquine and the antibiotic azithromycin had also been touted as a possible treatment for coronavirus infection. The analysis shows that the estimated number of patients receiving both drugs rose by 1,004% between February and March, from 8,885 to 101,681.

The data, published in a research letter Monday by the journal JAMA Internal Medicine, found prescription rates for chloroquine and hydroxychloroquine were stable from October 2019 through February 2020. The analysis only examined data through March.

The authors noted that the increased prescriptions might not all be attributed to Covid-19, as their data did not include for what purpose the drugs were prescribed. Still, they wrote that the sudden surge of hydroxychloroquine and chloroquine prescriptions may have affected availability for patients prescribed the drugs for uses approved by the US Food and Drug Administration, including for treating rheumatoid arthritis, lupus and malaria.

The FDA withdrew its emergency use authorization for hydroxychloroquine and chloroquine for Covid-19 on June 15.

More background: Some researchers thought chloroquine and hydroxychloroquine might be able to fight coronavirus based on initial laboratory analyses, and President Trump became a cheerleader of the treatment, calling it "very encouraging" and "very powerful" and a "game-changer."

But in recent studies of Covid-19 patients, the drugs have largely not stacked up. A randomized clinical trial — considered the gold-standard for determining drug efficacy — was halted by the National Institutes of Health after data showed hydroxychloroquine provided no benefit to Covid-19 patients.

“While there was no harm, the study drug was very unlikely to be beneficial to hospitalized patients with Covid-19,” the NIH said in a June 20 news release.

The Sacramento Kings have closed down their team practice facility after a member of their traveling party tested positive for coronavirus, a team spokesperson tells CNN.

The team is scheduled to leave for Orlando, Florida, on July 8.

The Kings' first scrimmage is scheduled for July 22 against the Miami Heat and first game in the league's resumption of the season is July 31 against the San Antonio Spurs.

The US Centers for Disease Control and Prevention is planning to release new guidance on how K-12 students can physically return to the classroom this year, according to a senior CDC official with knowledge of the discussions.

The recommendation was presented internally to leaders at the CDC early last week and is “a priority this week,” according to the senior official. Over the weekend, senior officials at the agency presented CDC Director Dr. Robert Redfield with details on the science behind why schools should reopen, the source said. The specifics of the guidance were not available.

“Schools should be the first to open and the last to close,” the official said. “Kids need to physically be in school."

The officials comments' echo that of the American Academy of Pediatrics, which put out new guidance last week that "…strongly advocates that all policy considerations for the coming school year should start with a goal of having students physically present in school.”

CNN has reached out to the CDC and the White House coronavirus task force for comment. The exact timetable for the proposed new guidance is unclear.

Princeton University will welcome undergraduate students back to campus in the fall with a reduced capacity, the school announced on Monday.

First-year and juniors will be allowed to return to campus for the fall semester, while sophomores and seniors will be welcomed back in the spring semester.

Most academic instruction will remain online, however. Princeton will discount tuition for all students by 10% for the school year.

Here are some safety guidelines the school will implement:

“What he’s saying to the American people is that there's no problem. And then they don’t wear a mask, and they don’t socially distance, and hey don’t take any precautionary behavior and then the virus goes like this,” Cuomo said. “He is facilitating the virus. He is enabling the virus by [making] statements like that. And you're seeing the infection rate go up and you’re seeing the economy suffer."

"He is part of that current debacle that we are in,” he added.

The governor cited President Trump’s various prior claims about the Covid-19 that have been proven wrong and his refusal to wear a mask to say that the President wants to “deny the Covid virus.”

Cuomo added that the way to combat coronavirus is by first admitting that there is a problem.

“You will never solve a problem in life that you refuse to admit. Why he refuses to admit it I have no idea. You have a White House coronavirus task force. Why have a task force if there's no problem?”

The PGA Tour will now not allow spectators at the upcoming Memorial Tournament at the Muirfield Village Golf Club in Dublin, Ohio.

A month ago, the tour announced that the Memorial Tournament would be the first contest to allow fans at the course. However, on Monday, golf officials said that "due to the rapidly changing dynamics of the COVID-19 pandemic," the tournament would have to cancel those original plans.

PGA Tour Commissioner Jay Monahan said in a Monday statement, "...given the broader challenges communities are facing due to the ongoing COVID-19 pandemic, we need to stay focused on the No. 1 priority for our Return to Golf — the health and safety of all involved.”

The first round of the Memorial Tournament is set to tee off on July 16.

Members of the American Hospital Association, American Medical Association and American Nurses Association are urging the public to continue to wear face masks, maintain physical distance and wash their hands to combat Covid-19, in an open letter published Monday.

“As physicians, nurses, hospital and health system leaders, researchers and public health experts, we are urging the American public to take the simple steps we know will help stop the spread of the virus,” the letter said.

These are measures the groups have been promoting since the beginning of the pandemic, and that after months of implementing these practices, rates of infection and death did begin to decline. However, since states began reopening, some of these steps – which they say are critical to progress being made – “were too quickly abandoned.”

As cases begin to dramatically increase again, hospitals are at or close to intensive care unit capacity, and personal protective equipment and testing supplies are running low, the groups say that many of the hard-won gains against Covid-19 are being erased.

They stress that reopening must not be confused with returning to normalcy.

“Doing so will escalate this crisis and result in more suffering and death,” the letter said.

The National Hockey League has revealed that the league has administered close to 3,000 Covid-19 tests ahead of the NHL’s planned restart to the current season.

In a statement released Monday, the NHL states that the league has conducted more than 1,400 Covid-19 tests in the past week with 23 of 396 players testing positive for coronavirus.

The league says an additional 12 players were found to have tested positive for Covid-19 outside of the current optional phase two activities.

The NHL has yet to announce a start date for the season restart – a 24-team competition to crown the 2020 Stanley Cup champion.

Read the NHL's statement on the coronavirus tests: