Brooks Brothers, the 200-year-old menswear retailer that has dressed 40 US presidents and unofficially became the outfitter of Wall Street bankers, has filed for bankruptcy.

The privately held company had been struggling as business attire grew more casual in recent years. But it has been decimated by the coronavirus pandemic, which sent demand for suits plummeting. Many employees working from home have opted for far more relaxed looks of t-shirts and sweatpants rather than pinstripe suits and custom shirts.

Brooks Brothers filed for Chapter 11 early Wednesday in a Delaware court. It had warned in June it would lay off nearly 700 workers in three states and is seeking a buyer because coronavirus destroyed its business.

The company has been evaluating various strategic options, including a potential sale. But it has struggled to find a buyer.

The retailer is reportedly in the process of shuttering 20% of its 250 US stores. According to the bankruptcy filing, Brooks Brothers has secured $75 million in financing to continue operating.

Background on the company: Brooks Brothers opened its first store in 1818 near Wall Street. Years later, it began making ready-made suits for men that couldn't wait for a tailor. In 1896, the retailer invented the original button-down polo shirt and has offered many other first of its kind clothing, including the madras prints and the chunky shetland sweater.

Claudio Del Vecchio, Brooks Brothers' owner, bought the brand in 2001 from Marks and Spencer for $225 million. He helped expand the brand's appeal beyond men, including women's clothing, kids and home items. He told the New York Times last month that its American factories "never made money" and planned to move some operations overseas to preserve cash.

Some more context: Brooks Brothers is the latest iconic retailer to go bankrupt. J.Crew, Neiman Marcus, JCPenney have all filed in recent months, partly citing slumping sales from the virus.

The pandemic hit Brooks Brothers especially hard because some workers were forced to work from home, eliminating the need for new suits and dressier clothes.

GlobalData Retail said in a note Wednesday that year-over-year sales of men's formal clothing fell by 74% between April and June.

"While this deterioration will ease over time, demand will remain suppressed for the rest of 2020 and well into 2021 as office working, business meetings, and socializing are all reduced," wrote Neil Saunders, the managing director of GlobalData Retail. "This leaves Brooks Brothers very exposed to a depressed market."

At a news conference yesterday, Florida Gov. Ron DeSantis indicated that Miami-Dade County “should be able to do” contact tracing.

“The contact tracing is actually a purview of the state,” Miami-Dade County Mayor Carlos Giménez told CNN’s John Berman this morning. “…We are willing to help in any way that we can.”

“We’re getting close but…this has taken a little bit longer than I would have hoped in order to get more people,” Giménez said.

Giménez added that contract tracing, while useful, may not be as helpful with this novel coronavirus because of so many asymptomatic cases.

Giménez added that he would not be comfortable opening schools at the end of August if coronavirus cases continue to surge, despite a state order to open.

Despite a mandate issued by Florida’s Education Commissioner Richard Corcoran requiring all schools to reopen in “brick and mortar” fashion in the fall, Miami-Dade County schools will only reopen for in-person classes if the county moves to phase two of the reopening plan.

The announcement was made in a tweet by Alberto Carvalho, superintendent of Miami-Dade County Public Schools.

The county is currently still in phase one, Carvalho said. "The well-being of students and employees remains our top priority," Carvalho said.

The county has become the epicenter of the Covid-19 crisis in Florida. In the past 13 days, the county has seen a staggering increase in the number of Covid-19 patients being hospitalized (87%), in the number of ICU beds being used (91%) and in the use of ventilators (108%), according to the latest data released by Miami-Dade County Government.

Rebekah Jones, the data official behind Florida's Covid-19 dashboard who launched her own dashboard after she said she was removed from the state's project, said that she doesn’t see an end in sight to the state’s coronavirus surge.

“Especially if schools are opening next month, then we're on a third wave of this first wave of catastrophe,” Jones told CNN’s John Berman.

Florida doesn’t track probable coronavirus cases, Jones explained. When people are tested as they arrive at the ER, “that doesn't count as an active hospitalization until their positive test result is received by [the Florida Department of Health].”

“If they started reporting probable cases, we might see a huge spike in not only cases, but also deaths,” she said.

Some background: Jones was removed from the dashboard after the Florida DOH said she had "exhibited a repeated course of insubordination" during her tenure there.

“I was flat-out told repeatedly that we were not adding hospitalization data, even though all of our epidemiologists said it was one of the most important indicators of how our health care system is handling the influx of cases,” she said.

She said she has contacts at the Department of Health who occasionally give her documentation, and many counties are at 70-80% capacity.

“The data out there is available. They just don't make it public themselves,” Jones said.

The UK Finance Minister has announced a major spending plan to create jobs in the UK as the government looks to boost its recovery from the coronavirus pandemic.

Rishi Sunak announced plans to boost youth employment, create green jobs and encourage employers to bring back furloughed workers by introducing a new job retention scheme which will see the government paying a 1,000-pound bonus for each furloughed employee who is still employed as of Jan. 31, 2021.

Sunak also announced cuts in property tax and a 4 billion-pound sales tax cut for the hospitality industry. 80% of hospitality firms stopped trading in April and 1.4 million hospitality workers have been furloughed – the highest proportions of any sector, according to the UK Treasury.

The cost of the government’s schemes included up to 9 billion pounds for rehiring furloughed workers, a 2 billion-pound plan to hire younger workers and 2 billion pounds worth of grants for green home improvements to create green jobs.

“Our plan has a clear goal: to protect, support and create jobs,” said Sunak in his summer statement on Wednesday. “It will give businesses the confidence to retain and hire. To create jobs in every part of our country.”

Harvard and the Massachusetts Institute of Technology on Wednesday sued the Trump administration over its guidance not allowing foreign students to take online-only courses this fall semester.

Harvard announced earlier this week that all course instruction will be delivered online, including for students living on-campus. In a statement provided to CNN, the university said the guidance stands to affect approximately 5,000 international students.

“The order came down without notice—its cruelty surpassed only by its recklessness. It appears that it was designed purposefully to place pressure on colleges and universities to open their on-campus classrooms for in-person instruction this fall, without regard to concerns for the health and safety of students, instructors, and others,” Harvard President Larry Bacow said in a statement. “This comes at a time when the United States has been setting daily records for the number of new infections, with more than 300,000 new cases reported since July 1.”

MIT president L. Rafael Reif said in a statement that the measure "disrupts our international students’ lives and jeopardizes their academic and research pursuits."

"Our international students now have many questions – about their visas, their health, their families and their ability to continue working toward an MIT degree. Unspoken, but unmistakable, is one more question: Am I welcome? At MIT, the answer, unequivocally, is yes," Reif continued.

Some background: Immigration and Customs Enforcement announced Monday that international students who are pursuing degrees in the United States will have to leave the country or risk deportation if their universities switch to online-only courses.

Visa requirements for students have always been strict and coming to the US to take online-only courses has been prohibited. ICE maintained that prohibition in its guidance, while providing some flexibility for hybrid models, meaning a mix of online and in-person classes.

In an FAQ published by the agency, the Department of Homeland Security reasoned that “all students scheduled to study at a US institution in the fall will be able to do so, though some will be required to study from abroad if their presence is not required for any in-person classes in the United States.”

The lawsuit, filed in the US District Court for the District of Massachusetts, seeks to block the directive, arguing it violates the Administrative Procedures Act.

The surge in coronavirus cases in Florida is creating fresh headaches for Republicans who are scrambling to raise money and quickly organize a political convention in the state after President Donald Trump abandoned plans to accept his party's nomination in Charlotte, North Carolina.

Florida, the site of next month's scaled-down convention, is now one of the nation's hotspots for the virus, raising concerns about how many Republicans will travel to Jacksonville and risk transmission to witness Trump's acceptance speech inside the city's 15,000-seat VyStar Veterans Memorial Arena.

The quadrennial political conventions typically are splashy, made-for-TV affairs that require years of planning and tens of millions of dollars to stage.

But the pandemic has upended plans for both political parties. The Democratic National Convention Committee has scaled back its August convention considerably and advised state delegates not to plan to travel to the convention site in Milwaukee.

On the Republican side, three GOP senators -- Iowa's Chuck Grassley, Tennessee's Lamar Alexander and Maine's Susan Collins -- said this week that they would skip the events in Jacksonville. Grassley, who at 86 is the oldest Republican in the US Senate, specifically cited concerns about Covid-19.

Convention organizers announced Monday they would test Jacksonville attendees daily for the coronavirus but did not provide details about the testing protocols. The gathering is slated for August 24-27, with Trump likely to deliver his acceptance speech on the last day if organizers stick to the original convention schedule. 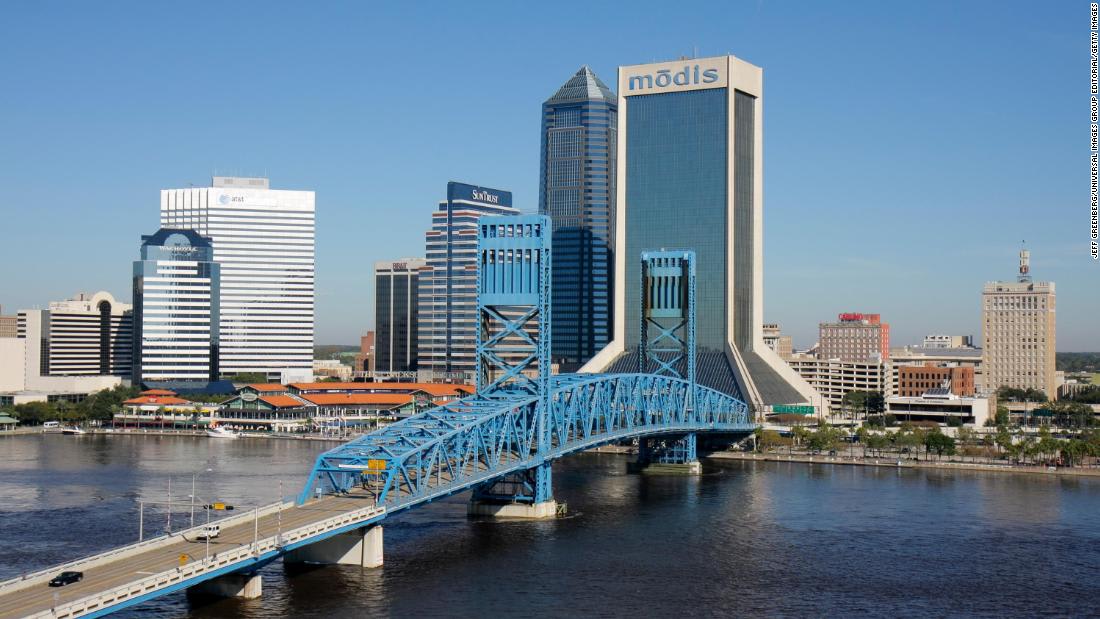 At least 2,691 new daily cases were also recorded, bringing the total to 248,379, she added during the news conference.

Iranian daily death numbers continue to rise over the past month despite showing a slowdown in cases in May. On Tuesday, the health ministry recorded 200 fatalities, the highest since the pandemic hit the nation.

The increase in numbers forced Iran to reimpose some restrictions last Sunday, including mandating mask-wearing in certain public areas.

"Unfortunately, we see that some consider being infected with the virus bad and hide it. If someone knows that they have been infected with coronavirus, they have religious and human duty to inform others about it,” Rouhani said according to the official Iranian presidency website.

Iraq on Wednesday reported at least 2,741 new coronavirus cases, the highest daily tally recorded in the country since the pandemic began.

This brings the total number of reported Covid-19 cases in Iraq to 67,442 according to the health ministry.

The health ministry also reported 94 new coronavirus related deaths, bringing the death toll to at least 2,779 across the country.