“You’re going to at least get a warning if not something stronger,” he said.

“Admittedly this is going to be harder to enforce, which is why it’s not a no-brainer, but we have to take this step particularly seeing the hotspots that we’re seeing elsewhere in the country. We’ve gone through hell in New Jersey. We’ve lost over 13,000 people, we’ve brought our numbers way down, we can’t go through that hell again,” he continued.

Read more about the states requiring people to wear masks when out in public here.

“People have been in line for eight hours in a hot car while they ache, waiting for a test," she said. "We are five months in in the United States of America. People who want a test should not have to wait that long."

Gallego says there is a need for low-barrier testing. She requested the federal government and the Federal Emergency Management Agency for mass testing sites in Phoenix, but that request has been denied.

“I believe a testing surge could help us with a backlog, and we also need help processing those tests. People are having to wait more than a week to get results. It is critical health information that they need to live their daily lives, she said. “We need our federal government to partner with us. I am taking any city resources we can and putting them towards testing. We have librarians and parks workers who are helping with testing, but their force and efficacy could be magnified if we had specialized medical experts who know about testing.”

William Haseltine, a former Harvard Medical School professor, claimed that Arizona is implementing a crisis standard of care, which means, “if you're old, you get sent home without care and you die.”

“Unfortunately, our medical professionals don't have the resources they need and so they are being asked to make difficult decisions,” Gallego said, responding to Haseltine’s comments. She emphasized that people experiencing emergency conditions such as a heart attack should still go to the emergency room and that they will receive care.

“There is the ability to care for individuals, but we are not meeting the standards of care in all cases that we want. We've been very stretched with intensive care beds,” she explained.

Medical professionals are exhausted and asking for reinforcements, while warning that “the worst is yet to come,” Gallego says.

Vice President Mike Pence and members of the White House coronavirus task force are set to hold a briefing at 11:30 a.m. ET from the Department of Education.

The briefing comes as at least 35 states are seeing an increase in new Covid-19 cases compared to the previous week and as the country nears 3 million cases.

New cases in the US continue to rise at a record rate, with the country reporting more than 60,000 cases yesterday  — its highest single daily count since the pandemic began.

Here's a look at how new cases have progressed over time: 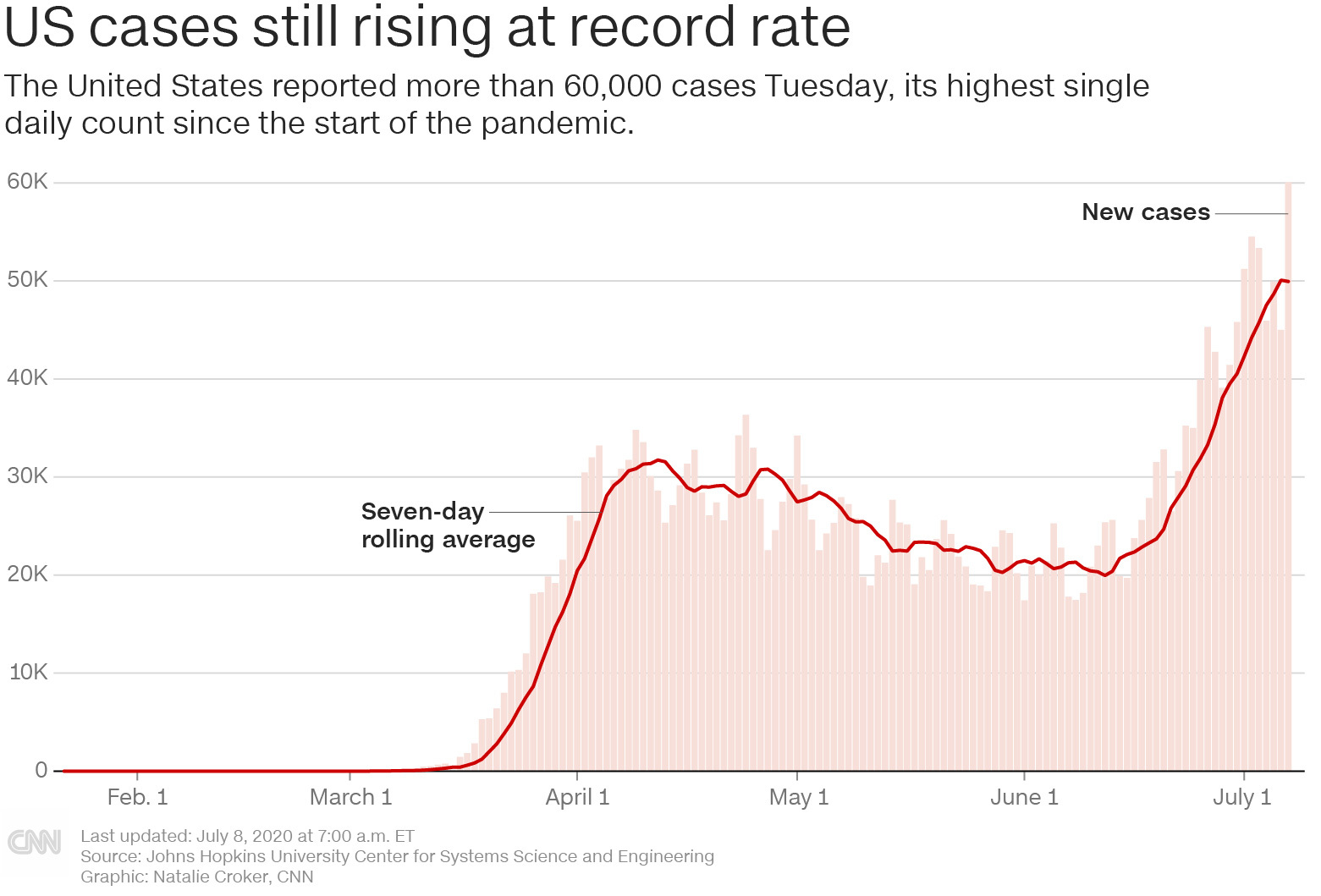 Florida health officials are reporting at least 9,989 new Covid-19 cases for the state on Wednesday, according to data from Florida Department of Health.

The record for the most daily coronavirus cases in a single day in the state, which was set last week, is more than 11,400.

Authorities have dug double trenches around the rural Siberian village of Shuluta to prevent people from entering and exiting the area during its coronavirus quarantine.

Dozens of villagers have contracted Covid-19 during the pandemic, reported Reuters news agency. Officials believe the disease spread in Shuluta after residents took part in a traditional shaman ritual on June 10 performed by an infected woman, according to Reuters.

The twin trenches were constructed on June 29 after people tried to enter the remote village by car, said Dora Khamaganova, a local administration official. They also prevent tourists who are visiting the nearby Tunka National Park from entering Shuluta.

"Double trenches, in fact, fairly deep double ditches, surrounded the village with an almost closed ring," Khamaganova wrote in a Facebook post on June 29.
"Disinfection of residential and non-residential buildings in both villages has been made in full. The disinfectors... are working day and night, practically without any breaks."

Khamaganova's post added that authorities are doing everything they can to limit the entry and exit of people from Shuluta.

At least 37 people living in the village have contracted coronavirus, out of a population of 390, reported Reuters.

According to Khamaganova's post, Ivan Alheev, the head of administration for the Tunka region, said that two residents of the villages of Shuluta and nearby Torah had known about their positive coronavirus results and will face prosecution at the end of quarantine.

Russia has 699,749 cases of coronavirus, the fourth highest total in the world, according to Johns Hopkins University.

The United States is still on track to possibly have a Covid-19 vaccine by the end of year or early next year, but the nation's top infectious disease expert, Dr. Anthony Fauci, warned there is still some uncertainty.

In a video message and presentation shown during a virtual panel held by the United Nations Academic Impact initiative on Wednesday, Fauci noted that many vaccine candidates currently are being studied, including the biotechnology company Moderna's mRNA vaccine, whose phase three trial was recently delayed to start later this month or in early August.

Promising results so far from that vaccine candidate and some others "makes me cautiously optimistic, although you can never, ever predict with any certainty whether a vaccine is going to be safe and effective," Fauci said during the presentation.

"The early data on these trial have us have a cautious optimism that we will be successful at least in developing a vaccine with some degree of efficacy by the end of the year, beginning of 2021."

Atlanta Mayor Keisha Lance Bottoms is expected to sign an executive order that will mandate facial coverings in the city.

Michael Smith, a spokesperson for the mayor told CNN that “details are forthcoming.”

The face mask development was first reported by WABE.

New York City Mayor Bill de Blasio said Wednesday that if schools reopen in the fall, the approach will be “blended learning” — meaning “at some points in the week, you're learning in person in the classroom; at other points of the week, you’re learning remotely.”

“Most schools will not be able to have all their kids in school at the same time” de Blasio said, adding that most students will be in school 2 or 3 days a week.

Remember: New York state has not decided if schools will be open in September but has asked each of the 700 districts to come up with a plan.

President Trump tweeted Wednesday his disagreement with the US Centers from Disease Control and Prevention's guidelines for safely reopening schools, calling their recommendations "very tough" and "expensive."

He also threatened he "may cut off funding" to schools that do not reopen, though the bulk of public school funding comes from state and local governments.

"I disagree with @CDCgov on their very tough & expensive guidelines for opening schools. While they want them open, they are asking schools to do very impractical things. I will be meeting with them!!!" the President tweeted.

Trump, who has advocated for reopening states as cases surge, said Tuesday he would pressure governors to reopen schools this fall during a discussion with educators, administrators, students, and parents.

"We hope that most schools are going to be open," Trump said at a White House event, baselessly claiming that some places will want to stay closed "for political reasons."

"They think it's going to be good for them politically, so they keep the schools closed," the President alleged without evidence. "No way."

"We're very much going to put pressure on governors and everybody else to open the schools, to get them open," Trump said, who has been anxious to reopen America to kickstart the economy and otherwise move on from the pandemic, despite its resurgence.

About school funding: Most funding for America's schools comes from the state and local level — over 90%, according to Education Secretary Betsy DeVos, but schools do get some targeted funding from the Department of Education. That federal funding often affects the nation's most vulnerable students.

But educators and administrators have called on the federal government to supplement funding for personal protective equipment and other resources, such as additional school buses, to reconfigure classrooms in order to safely reopen.

Republicans in the Senate are planning to unveil a stimulus bill that includes federal spending to re-open schools and childcare facilities. Democrats have also included proposals to get schools re-opened in their stimulus proposals.

Trump told Nextstar in an interview Tuesday that he had time to consider school reopening.

But many school districts in the south, where coronavirus cases are rising, begin the school year in just a few short weeks.

And while the President is hopeful the pandemic will improve over the next month, a trusted model from the University of Washington is forecasting an uptick in deaths this fall and increased its death toll projection to over 208,000 deaths by November.