New York City Mayor Bill de Blasio said there were no deaths reported within a 24-hour period — a first for the city since the start of the pandemic.

“The fact is for the first time in months we have a 24-hour period where no one in this city died from the Coronavirus, it is so striking and so moving, be Blasio said at a news conference,

“Twenty four hours where no one dies, let’s have many more days like that,” the mayor added.

Despite this good news, de Blasio also said there is a rising infection rates among people in their 20s, a trend he calls, "worrisome."

What the city is doing now: The mayor said the city will be “doubling down” on young adults by offering more mobile testing vans, outreach programs and mask giveaways.

The city, according to the mayor is issuing new guidance on face coverings, saying New Yorkers should wear a face covering as much as possible when around other people in an indoor setting that is not their home.

Mayor de Blasio said the city has set up 10 new testing sites in the Bronx, Queens and Brooklyn.

On Sunday, two countries accounted for half of all new cases added worldwide, World Health Director Director-General Tedros Adhanom Ghebreyesus said during a media briefing in Geneva on Monday.

Tedros did not name the countries, but according to a Johns Hopkins university tally of cases, the United States, India and Brazil accounted for more than 112,000 cases on Sunday.

“Let me be blunt: Too many countries are headed in the wrong direction,” Tedros said.

“The virus remains public enemy number one,” Tedros said. “But the actions of many governments and people do not reflect of this. "

Here's a look at the total number of confirmed cases by country: 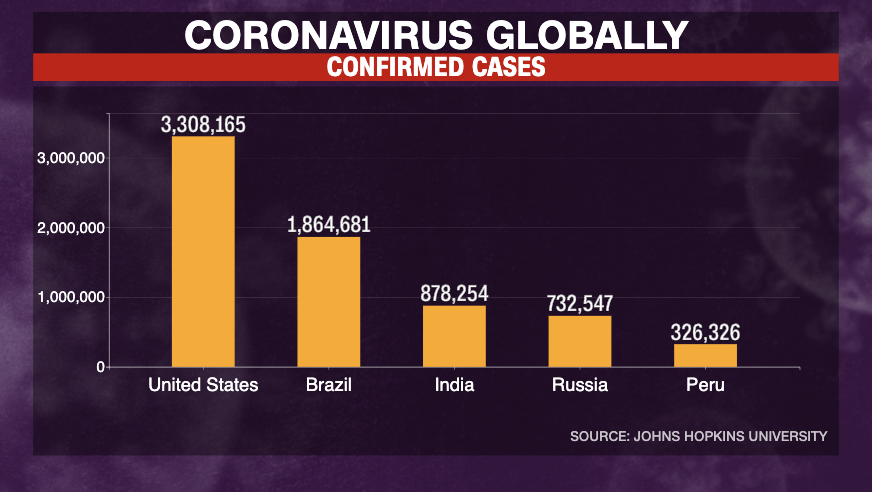 Tedros added that “mixed messages from leaders are undermining the most critical ingredients of any response: trust."

“If governments do not clearly communicate with their citizens and roll out a comprehensive strategy focused on suppressing transmission and saving lives. If populations do not follow the basic principles of physical distancing, hand washing, wearing masks,” Tedros warned, “there is only one way this is going to go. It's going to get worse and worse and worse.”

“It's never too late to bring the virus under control, even if there has been explosive transmission,” Tedros said. “WHO is committed to working with all countries.”

Argentina reached 100,166 confirmed Covid-19 cases, according to a report published by Argentina's Health Ministry on Sunday.

The report confirmed 2,657 new cases and 27 deaths. Argentina has reported at least 1,845 deaths to date due to Covid-19 as of Sunday night.

Argentina's president Alberto Fernandez made a call for unity on Sunday via Twitter, asking Argentines to "come together" to overcome the virus.

On Monday morning, the governor of Buenos Aires, former Economy Minister Axel Kicillof, and Buenos Aires mayor Horacio Rodriguez Larreta met to discuss whether the lockdown in the capital and surrounding cities should be extended, and what measure could be lifted, according to Argentina's official news agency Telam. The current restrictions will continue in place until next Friday.

The Argentine government had imposed a very strict lockdown that began on March 20, but hopes of controlling the pandemic was not met as cases continually rise. Currently, Buenos Aires and the surrounding cities, and at least four other provinces continue under phase one, the most restrictive phase of lockdown in the country.

Tedros Adhanom Ghebreyesus, director-general of the World Health Organization, said Monday “There will be no return to the old normal for the foreseeable future."

Speaking at a media briefing in Geneva, he added, “But there is a roadmap to a situation where we can control the disease and get on with our lives.”

“We need to reach a sustainable situation where we do have adequate control of this virus without shutting down our lives entirely or lurching from lockdown to lockdown,” he said.

In order to get to this place, Tedros said that three things would be required. These are a focus on reducing mortality and suppressing transmission; an “empowered, engaged community” that takes individual measures to protect the whole community; and strong government leadership and communication.

“It can be done. It must be done,” Tedros said.

Tedros said that there are no shortcuts out of this pandemic, and that while we hope for an effective vaccine, there must be a focus on using the tools that are available now to suppress transmission and save lives.

There are a total of 8,038 patients hospitalized across the state of Florida with the primary diagnosis of coronavirus as of Monday morning, according to new numbers released by the Agency for Health Care Administration.

The three most populous counties: Miami-Dade, Broward, and Palm Beach County, are experiencing the highest numbers of coronavirus related hospitalizations.

If Florida were a country, it would be the fourth-highest in the world in reporting new cases. The state would rank 10th in terms of having the most cases, according to data from Johns Hopkins.

Detroit Public Schools began summer classes today — the first time schools welcomed back some students for face-to-face instruction since the district closed in response to the coronavirus pandemic.

On top of in-person classes at some schools, the school district is also providing a distance learning summer program, according to the district's website.

The summer school program is voluntary: About 4,000 parents signed their children up for the classes, with more than half choosing face-to-face instruction. About 300 teachers signed up for 180 spots to teach in person.

What it's like in the classroom now: On Monday morning students and staff members will answer questions on a health form and have their temperature checked. They will be required to wear masks, and social distancing will be a priority.

Brazil's indigenous citizens have been hit hard by the coronavirus pandemic. Indigenous people in Brazil often live in communities which are far from hospitals, in areas which often lack basic infrastructure. Those who move to towns or cities can end up in precarious living conditions with few public services, increasing their vulnerability to health issues.

According to the country's Special Indigenous Health Service (SESAI), more than 8,000 Brazilian indigenous people have so far contracted the virus since the beginning of the pandemic. The service only counts people living in indigenous territories, urban centers.

The President of Mato Grosso Indigenous Federation told CNN that Brazilian President Jair Bolsonaro's government has failed to adequately prepare for the pandemic.

“The doctors have to prescribe, not the president. The government did not take prevention seriously,” the President of Mato Grosso Indigenous Federation said.

Brazil is nearing 1.9 million cases of the novel coronavirus after its health ministry reported 24,831 new cases Sunday. It has the second highest number of Covid-19 cases in the world, behind only the US.

Bolsonaro, who tested positive for the virus last week, vetoed several points of a law aimed at protecting indigenous communities against Covid-19 last Wednesday, according to the government's official journal. The proposed legislation establishes an emergency plan to combat the pandemic in indigenous territories and classifies indigenous people and other traditional communities as "groups in situations of extreme vulnerability."

But the vetoes are not final. The law's text, which has already been approved by the country's Congress and Senate, must now be voted upon again. If a majority in both houses vote against the President's vetoes, the law will be approved in its entirety. Otherwise, the law will move forward without the vetoed parts.

The president has repeatedly dismissed the threat of the disease, and has a historically antagonistic relationship with indigenous Brazilians.

Watch CNN's latest reporting on the ground in Brazil:

Here are details on the guidelines:

The Hospital Authority reported the eighth coronavirus death after a 95-year-old woman died Monday night. There are 1,521 confirmed Covid-19 cases in Hong Kong.

A UN report released Monday predicts the Covid-19 pandemic could send more than 130 million people around the world into chronic hunger by the end to 2020.

The UN’s Food and Agriculture Organization (FAO) published its latest edition of the State of Food Security and Nutrition in the World, which says the pandemic is “intensifying the vulnerabilities and inadequacies of global food systems.”

The report estimates “at a minimum, another 83 million people, and possibly as many as 132 million, may go hungry in 2020 as a result of the economic recession triggered by COVID-19.”

The report also estimates around 690 million people went hungry in 2019 – up by 10 million from the previous year.

Africa is the hardest hit region in terms of percentages, with 19.1% of its people undernourished, according to the report, followed by Asia at 8.3%, and Latin America and the Caribbean at 7.4%.

With the toll the pandemic is taking on food security, the report says achieving the Sustainable Development Goal of Zero Hunger by 2030 is in question.