Louisiana reported more than 1,300 new coronavirus cases Sunday -- 99% of which were spread through the community, and more than a third of which involved people aged 29 or younger, officials said.

The numbers match wider patterns across the US, with both local and state leaders saying in recent weeks that new cases appear to be largely driven by Americans who have opted to resume gatherings and outings to bars.

Young people affected: In many states, the average age of new cases has shifted downward, with more young people testing positive than ever before.

Mask mandates and closures: Louisiana Gov. John Bel Edwards announced a mask mandate will go into effect Monday morning following an uptick in cases. Many of the new cases are being traced to backyard get-togethers and other gatherings, the governor said.

Bars will also be closed for on-site alcohol consumption, after at least 36 outbreaks and more than 400 cases were traced back to bars in the state.

At least 36 states now have some type of mask requirement order in place, and more than half of US states have paused or rolled back their reopening plans in efforts to contain the spread of the virus, which some experts have said is now out of control. 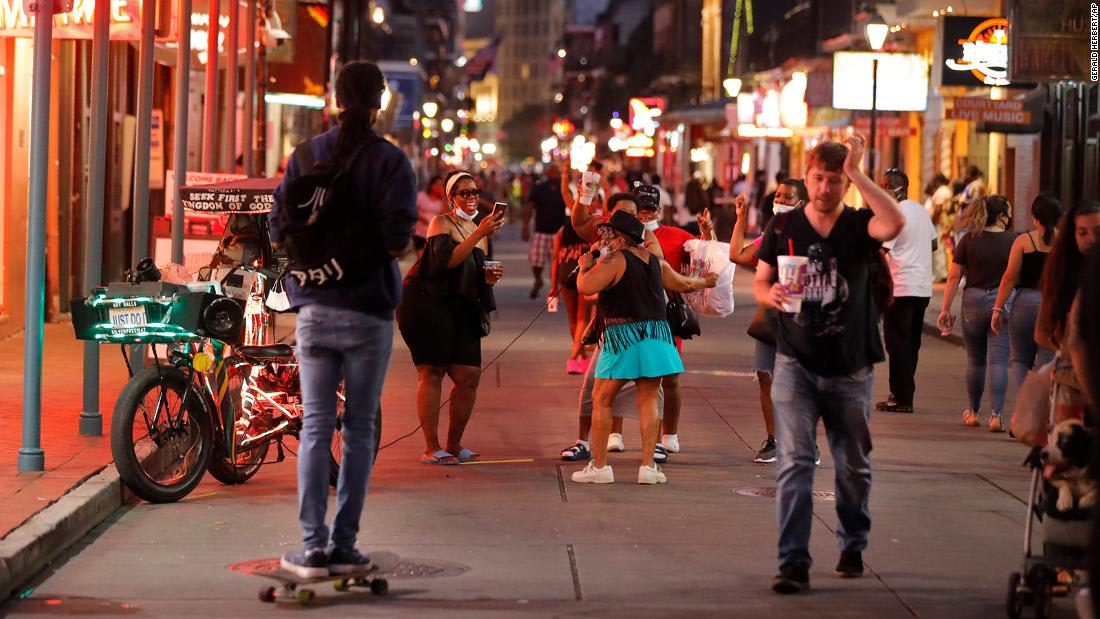 Of the 52 new cases, officials said 11 were imported and 20 of the local infections come from "unknown sources."

This is the highest number of daily local cases so far in Hong Kong's "third wave," which began in early July following weeks of registering zero local transmissions.

Schools shut: Hong Kong last week announced that all schools in the city would be suspended following a surge in locally-transmitted coronavirus cases. On Monday, kindergarten, primary school and secondary schools started their summer holidays early.

As of Sunday, there were 1,898 Covid-19 patients, 393 patients in ICU beds, and 206 patients on ventilators, according to data from the county government.

Officials reported a 14-day average Covid-19 positivity rate of 26% on Sunday, according to data released by Mayor Carlos Gimenez's office. The positivity rate is tracked daily by county.

Gimenez's office has said the goal is to not exceed a daily positivity rate of 10%. The county has exceeded a daily 22% mark for the past 14 days.

Lebanon has seen a surge in coronavirus cases, less than two weeks after it virtually ended its lockdown.

Early in the pandemic, the eastern Mediterranean country took aggressive measures to stem the spread of the virus.

It has had 36 deaths from Covid-19 since the first reported case in February.

But less than two weeks after the capital’s airport reopened, infections have risen rapidly. Yesterday the country reported 166 new cases -- a record high for the country.

In interviews with local television stations, Health Minister Hamad Hassan said 122 of those cases were from an unnamed cleaning company, adding that the government would continue to contain cluster breakouts, and would avoid stepping up lockdown measures.

"Our admitting capacities in government hospitals are acceptable and the departments are ready," Hassan told local television channel LBCI on Sunday, according to the state-run National News Agency. "Despite the high number of coronavirus cases, matters are still within the set plan," he added.

Economic fears: Officials in Lebanon, which is in the throes of its worst economic crisis in decades, have also been keen to avoid a lockdown.

Late last month, the country’s currency lost most of its value, but it began to rise again, days after the reopening of Beirut’s international airport.

"Two days (ago) we had … almost 20 hours of power cuts a day, and that was very brutal on us because it consumed a large chunk of our stored fuel," said Firass Abiad, head of Rafik Hariri University Hospital, where the majority of Beirut's coronavirus cases are treated.

Abiad told CNN’s Ben Wedeman he expects the situation to become "more difficult," in the days and weeks to come. "Whether we will be able to keep finding solutions … I do not know."

Florida's staggering new single-day US state record of coronavirus cases underscores how the aggressive opening strategy championed by President Donald Trump and allied governors is turning into one of the worst political and economic calls in modern history.

The Sunshine State recorded more than 15,000 new infections on Sunday -- the highest number of new cases in a single day by any state -- as the pandemic raged across southern and western heartlands including Texas, Georgia and Arizona.

The surge came two months after many states, disregarding government guidelines, opened up bars, gyms, hair salons and other businesses.

Fresh controversy is boiling meanwhile over Trump's aggressive push to get schools fully operational within weeks, after Education Secretary Betsy DeVos failed repeatedly to outline a plan to do so safely in a CNN interview Sunday.

The White House also intensified a stunning whispering campaign against the nation's top infectious disease specialist, Dr. Anthony Fauci, accusing him of making mistakes and of refusing to prioritize the President's interests.

Trump's fixation on his electoral prospects and desire to ignite an economic comeback were behind his assurances that it was safe to ease stay-at-home orders without waiting for infection curves to properly flatten. The push was eagerly embraced by some GOP governors, including Florida Gov. Ron DeSantis, who is now facing heavy criticism as his state sees runaway infection rates. 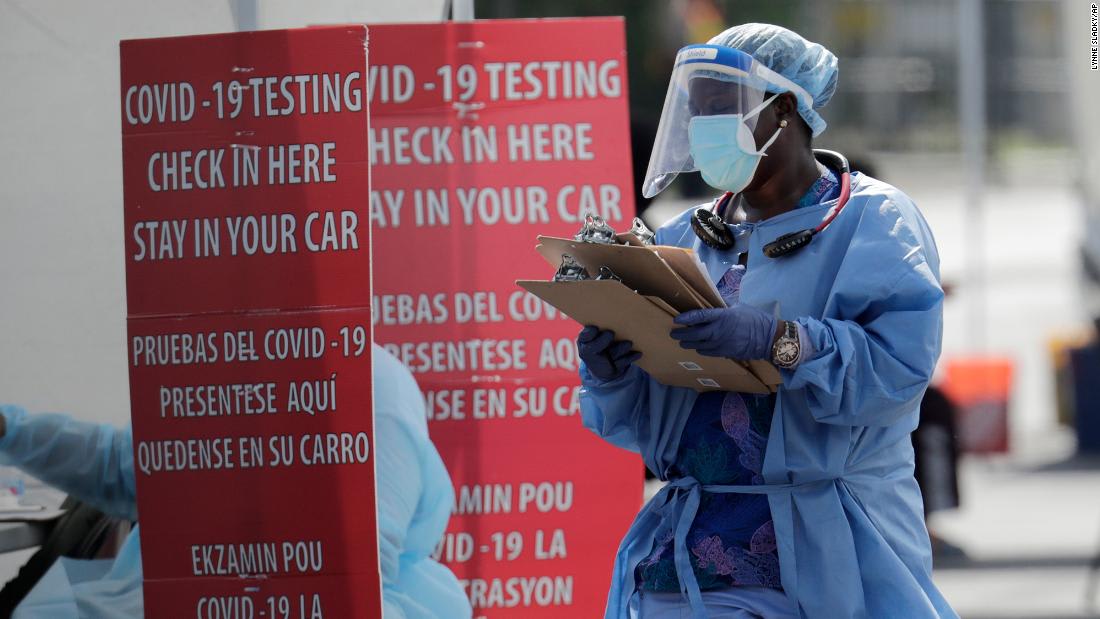 A Spanish judge has blocked the Catalan regional government’s order to require home confinement as a way to contain the spread of Covid-19 in the provincial capital of Lleida and 7 nearby towns.

The ruling, which came late Sunday, explained that the confinement was part of the state's jurisdiction, and not the regional government's. It added that the president of Catalonia "could ask the (Spanish) Government to declare a state of alarm."

The judge, an investigating magistrate in Lleida, noted that the state prosecutor had opposed the implementation of the Catalan government’s stay-at-home order.

Any measures adopted should respect the principle of proportionality," said the ruling, which can still be appealed to the Superior Court of Catalonia.

The measure would have confined 156,000 people to their homes, with few exceptions, after Segría county -- including Lleida city -- tallied 1,438 new cases of Covid-19. The cases have all been recorded since June 21, when Spain's state of emergency ended following three months of nationwide confinement.

A week ago, Catalonia ordered Segría's 200,000 residents to stay inside the county, which is a two-hour drive from Barcelona. But as the outbreak kept spreading, authorities issued a home confinement order for the majority of people.

Lleida's Mayor, Miquel Pueyo, warned in a statement that home confinement would have "a huge economic and emotional impact on the territory," and asked the Catalan government to "guarantee the salaries of the workers from outside Lleida who for 15 days wouldn't be able to come to work in Lleida" because of the confinement order.

The World Health Organization (WHO) reported the highest daily number of Covid-19 cases globally on Sunday, with 230,370 new infections.

In the US, where the virus is raging across parts of the country, nearly one out of every 100 Americans have tested positive for Covid-19.

The US has recorded more than 3.3 million coronavirus cases since the pandemic began, according to Johns Hopkins University, and at least 135,205 Americans have died.

Across the world, 12.9 million people have tested positive for the virus, according to figures from Johns Hopkins.

US military bases in Okinawa hit by Covid-19 as outbreak worsens: United States military personnel on the Japanese island of Okinawa are on virtual lockdown after almost 100 coronavirus cases emerged on several US Marine Corps bases there.The order, which was issued Saturday morning, bans almost all off-base movement by the tens of thousands of US military personnel there, unless approved by an officer with the rank of lieutenant colonel or above.

US service members test positive: Eleven service members of US Forces Korea (USFK) tested positive for coronavirus upon their arrival in South Korea from the United States, USFK said in a statement. Two service members arrived at Osan Air Base on a US government chartered flight on July 7, and nine service members have arrived at Incheon International Airport on four separate commercial flights since July 8.

Bollywood stars test positive: Coronavirus has hit one of Bollywood's leading families with superstar Amitabh Bachchan, his son Abhishek Bachchan and daughter-in-law, actress Aishwarya Rai Bachchan all being admitted to hospital. Authorities in Mumbai have declared Bollywood star Amitabh Bachchan's Jalsa residence in the city a containment zone, after the actor and other family members tested positive for coronavirus.

South Africa will resume a ban on alcohol sales and reinstate a daily curfew from 9pm-4am to free up hospital capacity as the country’s Covid-19 cases continue to rise.

"The storm is upon us. More than a quarter of a million South Africans have been infected by the coronavirus," said President Cyril Ramaphosa in a televised address to the nation on Sunday evening.

Cases surge: Gauteng Province, home to the commercial hub of Johannesburg and the country’s capital, Pretoria, is leading the surge, with confirmed case numbers fast approaching 100,000.

South Africa is recording more than 12,000 new Covid-19 infections every day -- the equivalent of 500 new cases each hour. A quarter of South Africa’s more than 4,000 coronavirus deaths have occurred in the last week.

Ramaphosa said it was projected that 40,000-50,00 South Africans could die of the virus within the year. "We must make it our single most important task to prove these projections wrong," he said.

The President highlighted the success of treatment interventions and a stringent lockdown for keeping South Africa’s 1.5% case fatality rate among the lowest in the world.

Ramaphosa announced that ward capacity would be further freed up by delaying non-urgent care, and the construction of field hospitals throughout the country. Ramaphosa also said the country would divert a supply of oxygen from other purposes.