Massachusetts Attorney General Maura Healey along with 17 other state attorneys generals, including New Jersey and Connecticut, filed a lawsuit Monday against the Trump administration, aimed at preventing a federal rule that “threatens to bar hundreds of thousands of international students from studying in the United States."

In a press release Monday, Healy said the lawsuit filed in US District Court in Massachusetts against the Department of Homeland Security and US Immigration and Customs Enforcement challenges what the attorneys general call the federal government’s “cruel, abrupt, and unlawful action to expel international students amidst the pandemic that has wrought death and disruption across the United States.”

The lawsuit is seeking an injunction to stop the entire federal rule from going into effect while the case is litigated. The attorney generals', according to the release, have requested a hearing as soon as possible on the matter.

Healey said the lawsuit, “alleges that the federal government’s actions are arbitrary, capricious, and an abuse of discretion because they reverse previous guidance without explanation, input, or rationale – in violation of the Administrative Procedure Act – and fail to consider the need to protect public health and safety amidst the ongoing COVID-19 pandemic.”

Separately, there is a hearing Tuesday for a lawsuit filed by Harvard College and the Massachusetts Institute of Technology seeking to block the directive, arguing it violates the Administrative Procedures Act.

Remember: Immigration and Customs Enforcement announced last week that international students who are pursuing degrees in the US will have to leave the country or risk deportation if their universities switch to online-only courses,

The move may affect thousands of foreign students who come to the US to attend universities or participate in training programs, as well as non-academic or vocational studies.

White House economic adviser Larry Kudlow suggested Monday that there may be a financial incentive for local governments that reopen their schools.

Kudlow reiterated that President Trump is considering defunding schools that do not reopen, but, “I think the President would be willing to consider additional funding for state and local governments if the schools do reopen, so that is perhaps an incentive.”

The Fox hosts asked him about his comments that going back to school shouldn’t be “that hard.”

He wouldn’t provide specifics on how much money would be allocated for areas that reopen schools.

“It's something that probably would be on the table. He has not made a decision. This is a pre-decisional thought, but it can be done," he said.

"I mean this is not...so difficult. We shouldn't be so pessimistic...America is creative and innovative,” Kudlow added.

He also acknowledged on Fox that the new case rate is “disturbing” but it “doesn’t yet seem to be translating” into another economic downturn. 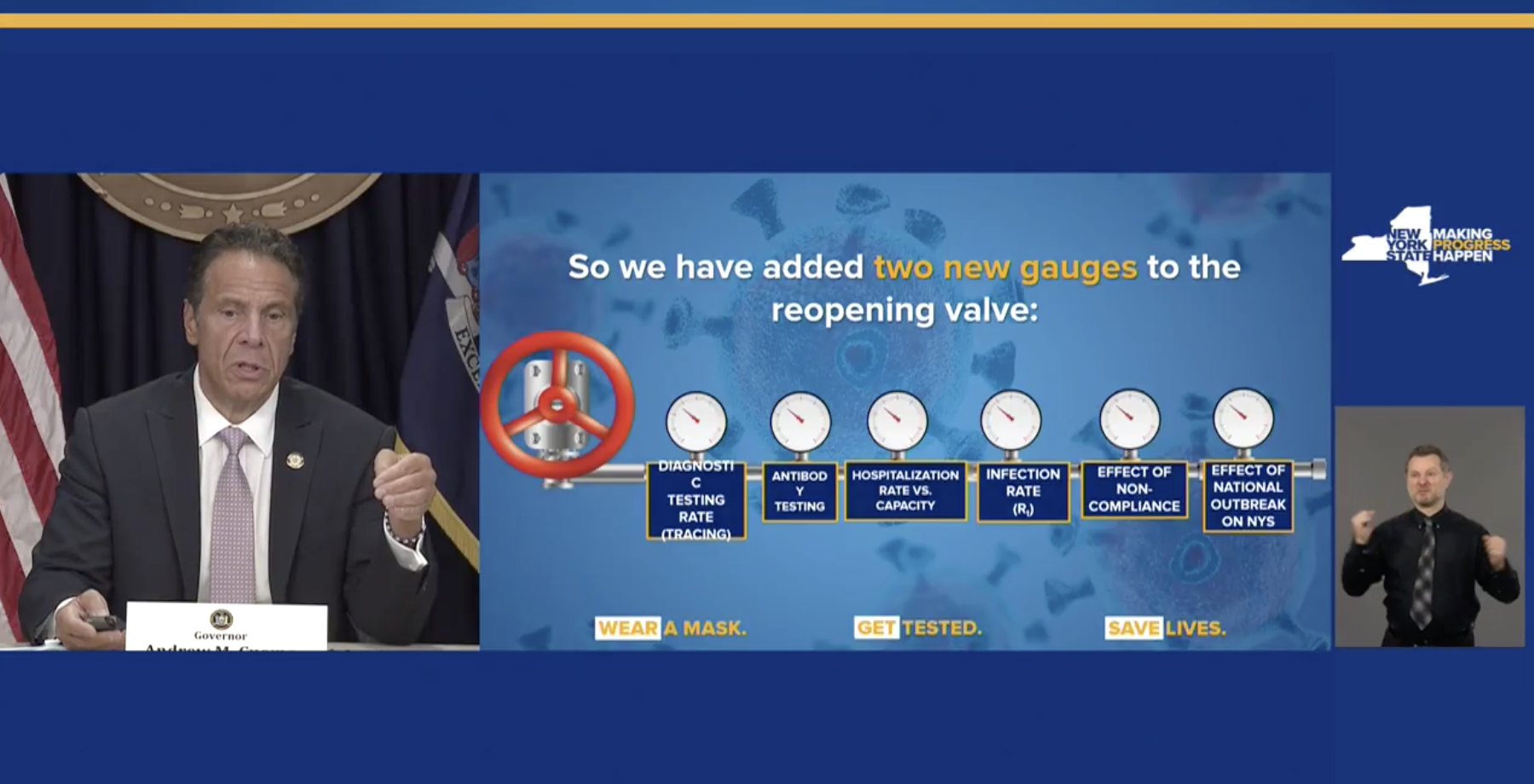 New York Gov. Andrew Cuomo said he will soon issue an emergency health order that mandates that people traveling from high-risk states must give their contact information to local officials so the state can enforce the mandatory two-week quarantine.

People traveling to New York state by plane will get a contact form to fill out. If they leave the airport without turning it back in, they will receive a summons and a $2,000 fine. Those travelers may also be brought to a hearing and be forced to quarantine.

New York currently requires anyone traveling from a state with a high infection rate to quarantine for at least two weeks once they enter the state. Cuomo said there have been incidents of travelers coming to the state and not complying with the quarantine, causing outbreaks in communities.

Cuomo added that there are two threats to the state's success in battling coronavirus — people who do not comply with social distancing and other safety measures and outbreaks across the country, that could travel back to New York.

The governor said that because of these two new threats, state officials are adding two new factors to the list of considerations for reopening.

Cuomo said today that along with those three factors, the state will now also consider the effects of non-compliance and the effect of the national outbreak outside of New York.

The first DC resident died from coronavirus complications on March 20. Since then, at least 528 individuals have died from Covid-19.

This is the first time since then that the District has seen four consecutive days without a loss of life due to coronavirus.

This comes as coronavirus cases are still slightly trending up.

In order to enter phase three of reopening, Bowser has said Washington, DC needs to see 14 days of decreased cases.

The city made it 8 days, but spikes brought it back down to three. Currently, the city has seen 5 days of decreased cases.

As coronavirus cases continue to soar in Florida, Memorial Hospital West in Pembroke Pines, Florida, is past its ICU capacity, and the team is now “creating space at every inch of the building,” CEO Leah Carpenter says.

In an effort to manage the surge, the hospital has canceled all elective surgeries so it can redeploy staff in high priority areas, she added.

“We've set up tents outside of our emergency rooms to help with the capacity in the emergency room. We've converted many non-traditional areas in the building to patient care areas. For example, auditoriums, conference rooms, classrooms.”

Carpenter says the team has the resources it needs right now but “if the surge continues, I have significant concerns about whether or not we’ll have what we need.”

She noted there are concerns about the availability ventilators, oxygen supply, dialysis equipment and personal protective equipment. 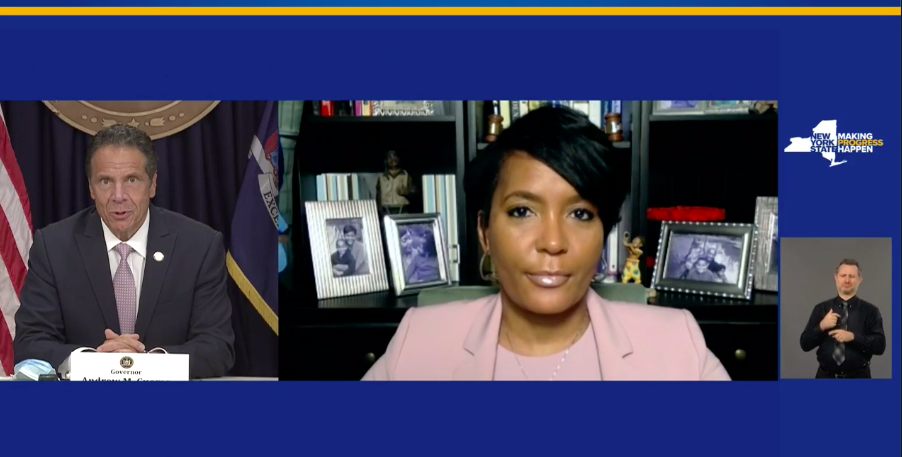 New York Gov. Andrew Cuomo is offering to help other cities where coronavirus cases are rising, saying they should learn from what New York went through and follow the data and protocols that worked for the state.

Cuomo told Atlanta, Georgia, Mayor Keisha Lance Bottoms "anything we can do we stand ready" at his daily news briefing on Monday.

"You have more than risen to the occasion," Cuomo said.

He pointed to the nurses and medical workers who came from across the country to help in New York hospitals when the state was hit hard by the virus, saying he wanted to "pay forward" that act of "generosity and love."

Cuomo offered to help Bottoms with setting up testing and other safety protocols.

Bottoms, who tested positive for Covid-19 at the beginning of July, talked about the situation in the city saying ICU bed capacity is full in some hospitals.

"We're headed in the wrong direction," she said. 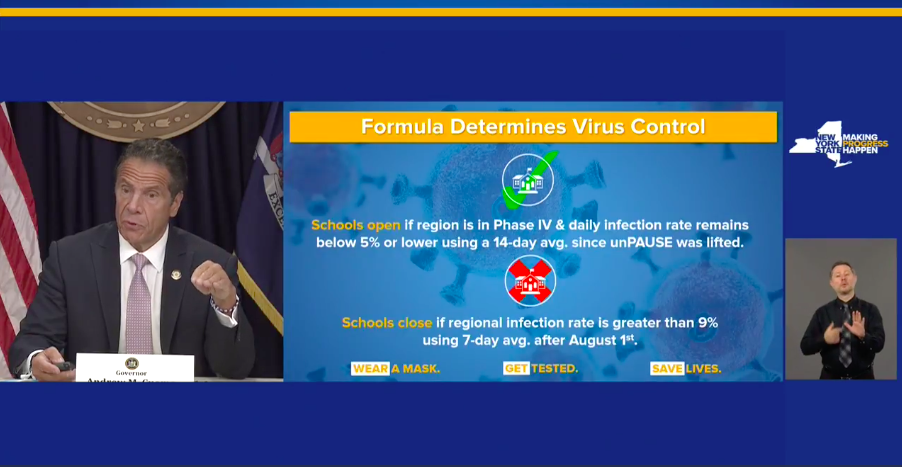 New York Gov. Andrew Cuomo laid out the state's criteria for schools to reopen in the fall across the state.

He said that for a region to reopen its schools, it must be in phase four of reopening and the daily infection rate must be below 5%, which means that "the virus is under control" and it is "safe to reopen," the governor said.

Cuomo said that "if the infection rate goes over 9%...that means the virus is moving rapidly" and if that happens, schools will be closed.

"That's the green light and that's the red light," Cuomo said about the formula the state is going to use.

The governor reiterated that the 700 school districts across the state are required to present their plan for reopening by the end of July.

Cuomo said, "we'll make the first decision" on who can reopen and how during the week of Aug. 1-7. "The day the school opens, we continue to monitor," he said.

Just like the state is coordinating its economic reopening, Cuomo said reopening schools is “purely on the numbers, it’s on the science.”

Maria van Kerkhove, the World Health Organization’s technical lead for coronavirus response, emphasized during a briefing Monday that the understanding of coronavirus transmission in children is still limited.

“Children do seem to be less affected, but they can be infected. And that is important,” said van Kerkhove. “Our understanding of transmission in children is still limited.”

The virus is less prevalent among young children, van Kerkhove said, while children about 10 and older appear to have about the same prevalence as young adults.

However, she pointed out that children can have severe disease, and children have died from Covid-19.

“They can be infected, which we’ve said from the beginning, but they do tend to have more mild disease,” she said. “In terms of transmission, there’s quite a lot that we still need to understand about transmission in children.”

In relation to schools reopening, van Kerkhove said that WHO has issued guidance on the safe running of schools and also on considerations of when schools should reopen and that there are a number of considerations that need to take place.

These include transmission in the local area and the ability of the school structure to be able to implement measures like social distancing and hand washing.

Van Kerkhove said they have heard of some outbreaks in schools, mainly among older children.

The World Health Organization is warning countries against using school reopenings as “political footballs that get kicked around the place.”

During a Monday briefing, Dr. Mike Ryan, executive director of WHO's Health Emergencies Program, said “it's not fair on our children.”

“There are many countries around the world in which schools are reopening successfully, and safely, because countries have dealt with the real problem: community transmission,” Ryan said.

“The problem we have in some countries right now is that it's very difficult to determine the safety of any environment because there's just so much transmission going on, that all potential environments in which people mix are essentially problematic,” he added.

The best way to reopen schools, Ryan said, is by lowering community transmission using a “comprehensive long-term strategy” that looks at “everything at one time.”