Dr. Robert Redfield, director of the US Centers for Disease Control and Prevention, said he thinks "the fall and the winter of 2020 and 2021 are going to be the probably one of the most difficult times that we experienced in American public health."

Speaking Tuesday during a webinar with the Journal of the American Medical Association (JAMA), Redfield said this is all due to the potential co-occurrence of Covid-19 and the flu.

“Keeping the health care system from being overstretched, I think, is really going to be important. And the degree that we're able to do that, I think, will define how well we get through the fall and winter,” he said.

The ordinance also applies to public spaces that are indoors, as well as outdoors when residents cannot maintain a safe social distance.

"The reason this is happening is because we cannot say that we've conquered Covid-19 in Milwaukee, in Milwaukee County, in the state of Wisconsin or the United States," Barrett said.

The Milwaukee Common Council adopted the ordinance on Monday and it goes into effect on Wednesday.

Barrett said the ordinance is intended to protect the health and safety of all residents in the city.

“I don't know this virus," Dr. Robert Redfield, director of the Centers for Disease Control and Prevention, said in an interview with the Journal of the American Medical Association (JAMA) on Tuesday. “I just got introduced to it, you know, six months ago."

Redfield said he’s reluctant to make predictions about the virus, because past predictions haven’t always been accurate.

Redfield's comments come as the US continues to see a surge in cases and at least 37 states are reporting an increase in new cases compared to the previous week, according to Johns Hopkins University data.

More than 3.3 million people have now tested positive nationwide  — but the true number of infections could be much higher, experts have said, as at least 40% of those who contract the virus show no symptoms, according to a new estimate by the CDC.

Here's a look at where cases are increasing across the country: 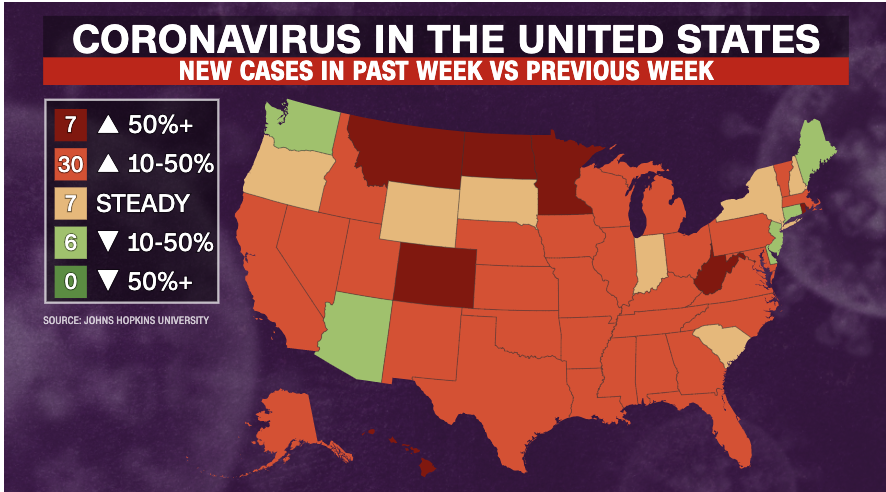 The state expects an early August decision on which scenario school will start under,  Delaware Department of Education Secretary Susan Bunting said.

According to Bunting, districts and charters will use guidance to support the continued development of their individual reopening plans.

"We are hoping for as much in-person instruction as we can possibly provide," she added.

Delaware Gov. John Carney said that Delaware’s priority is testing teachers and staff as widely as possible to start the school year off, with periodic testing thereafter.

Face coverings will be required for grades 4 and older and for all adults, while strongly encouraged for younger children, especially if less than six feet apart, according to Dr. Karyl Rattay, Director of Delaware’s Division of Public Health.

The Georgia Department of Public Health (GDPH) reported 3,394 new confirmed cases of Covid-19 in the state on Tuesday.

This brings the state total to 123,963 confirmed cases.

The state has reported a total of 3,054 Covid-19 related deaths.

Dr. Robert Redfield, the head of the US Centers for Disease Control and Prevention, estimated that “between March and April and May, we probably actually had 20 million infections in the United States.”

“We went back and looked, using antibody testing to get an understanding of how extensive the infection was," Redfield said during a webinar with the Journal of the American Medical Association (JAMA) on Tuesday.

While the US only officially diagnosed 2 million cases, he said “in that period of time, it was probably 10 to 1."

“Between March and April and May, we probably actually had 20 million infections in the United States,” Redfield said. “We only diagnosed 2 million.”

The current situation is a “very, very significant problem right now,” he added.

“This is a serious issue, as you know. We're currently diagnosing, say, 60,000 cases a day. I don't know how many infections that really represents,” Redfield said.

According to the state’s health secretary, there were only five available ICU beds on Monday, but later that day, Alexandre Guedes, a prosecutor at the State Public Prosecution Office, told CNN that demand for the 332 total ICU beds in the state had exceeded supply.

“When the [State Health Secretary] did the official report, those five beds were available. But they’ve remained this way only for a short time. We have a list of people who are still waiting for an ICU bed to be available. Some of them will die waiting for intensive care treatment,” Guedes said.

There have been 37 lawsuits filed by Covid-19 patients at the Mato Grosso State Court of Justice for more ICU beds to be made available, according to a judge of the Specialized Health Court of Mato Grosso, José Luiz Leite Lindote.

Some background: Since the pandemic started in Brazil in mid-March, Mato Grosso Gov. Mauro Mendes refused to build field hospitals, saying that the money is better spent by bolstering existing health facilities and adding ICU beds there. In a statement to CNN Monday, the state government press office said “that will benefit the population of Mato Grosso, not only during the pandemic."

Other than Sinop, a thriving agribusiness city in the north of the state, there are no field hospitals outside the state capital Cuiabá. This means patients from the countryside need to travel to the capital for adequate health treatment.

"And there is still no prospect of opening a field hospital in Cuiabá," Guedes said Monday.

He said there is now a total of 549 medicines, pieces of equipment and machinery items used to fight the virus that have no tariff.

The resolution mandating this was published in the country’s official gazette on Monday and said the action “grants a temporary reduction, to zero percent of the import tax rate under the terms of article 50,” continuing to say the objective was to “facilitate the fight against the Corona Virus/Covid-19 pandemic.”

Among the materials on the list is ivermectin, which Bolsonaro advocated the use of as a treatment for Covid-19 in a Facebook Live last Thursday. The following day, Brazil’s National Health Surveillance Agency, Anvisa, released a statement saying, "it is necessary to make it clear that there are no conclusive studies that prove the use of this medication for the treatment of Covid-19, as well as there are no studies that refute this use."

The resolution also eliminated tariffs on machinery for the production and packaging of disposable respiratory protection masks.

The state reported 260 new hospitalizations on Tuesday, which reflects a 4% increase from Monday. There was an increase of 53 new ICU patients, reflecting a 2.9% rise from Monday.

The majority of the hospitalizations are in Los Angeles County, according to the public health agency.

The positivity rate over a two-week period is 7.1%, according to the public health agency.