There are 993 new Covid-19 cases today in Oklahoma, bringing the total to 21,738, according to the state's Department of Health.

This is a record high of reported cases, according to data release by the health department.

Oklahoma also reported an additional four deaths, bringing the total number of fatalities in the state to 428.

Tulsa County has 5,448 total cases, up 181 from Monday, while Oklahoma County, which includes Oklahoma City, is reporting an additional 273 cases for a total of 5,259.

Note: These numbers were released by the Oklahoma State Department of Health, and may not line up exactly in real time with CNN’s database drawn from Johns Hopkins University and the Covid Tracking Project.

Dr. Robert Redfield, the head of the Centers for Disease Control and Prevention, said the CDC is working to “deploy point of care tests to every nursing home in this country.”

He said this new technology is something the CDC is “in the process of deploying.”

Hopefully the deployments will begin later this week or early next week “so they can start doing their own testing,” Redfield said during a webinar with the Buck Institute on Tuesday.

He said the long-term goal is to allow for the return of visitors to nursing homes.

“I’ve seen the decline in individuals when they’ve been deprived from interactions,” he said.

“When you do remove that, there is a clinical consequence,” he added.

Dr. Robert Redfield, director of the US Centers for Disease Control and Prevention, discussed the importance of wearing masks during a webinar with the Buck Institute for Research on Aging on Tuesday.

Redfield said that “we’re not defenseless” when it comes to Covid-19.

Wearing masks, social distancing and washing your hands are all things that can help when it comes to transmission. When social distancing, he noted that masks are the most important thing.

He described masks as a powerful tool.

“If we all wore face coverings for the next four, six, eight, 12 weeks, across the nation, this virus transmission would stop,” he said.

Boston Mayor Marty Walsh said in a news conference today that there are 111,827 cases of coronavirus in the state and 8,330 people have died due to Covid-19. That is an increase of 230 cases and five deaths since yesterday in Massachusetts.

In Boston, the mayor reported 13,723 total cases of Covid-19 and said the city has been averaging about 16 new cases per day, with 50 new cases reported since Friday.

One thing to note: These numbers were released by the Boston mayor’s office and may not line up exactly in real time with CNN’s database drawn from Johns Hopkins University and the Covid Tracking Project.

Dr. Robert Redfield, director of the US Centers for Disease Control and Prevention, said "a majority of counties in this country" are in a place where they can reopen their schools.

“I think there’s actually a majority of counties in this country that are in a position to reopen their schools based on the data we have now, case counts, the percent positive, the availability of testing and the resilience of the health system they have,” Redfield said today at a webinar with the Buck Institute for Research on Aging.

He added that he thinks a majority of counties would meet the criteria to reopen, as long as teachers, administrators and parents had the confidence to do so.

One of the things the CDC has tried to do, he said, is “allow people how to understand how to do their own risk assessment” – something that is very important as local school districts are going to have to make their own decisions. Remember: The CDC has released guidelines for schools as they reopen.

While Redfield said he didn’t want people to overestimate the risk of serious illness for children, he did point out there needs to be ample considerations to vulnerable individuals – for example, teachers or students who have existing co-morbidities.

“I’m of the point of view, and I weigh that equation as an individual who has 11 grandchildren, that the greater risk is actually for the nation to keep these schools closed,” Redfield said, highlighting that many children get mental health and nutritional services along with the teaching method and social aspect.

Moderna, an American biotech company, expects to start their largest study yet of its Covid-19 vaccine candidate on July 27, according to details released Tuesday on a government database that tracks clinical trials conducted around the world.

Here is how the vaccine trial will work:

The study will be conducted at 87 locations across the United States.

Remember: Moderna’s vaccine candidate is one of 23 in clinical trials around the world, according to the World Health Organization.

Moderna's Covid-19 vaccine candidate is expected to be the first in the United States to begin phase three trials.

Vice President Mike Pence has arrived in Louisiana, where he was greeted Gov. John Bel Edwards, Sens. Bill Cassidy and John Kennedy, and Rep. Steve Scalise, among others. Everyone wore masks.

Pence is expected to deliver remarks at the State Emergency Operations Center at 1 p.m. ET and receive a coronavirus briefing after that. While in Louisiana, he will also participate in a roundtable on higher education and hold a press briefing.

Coronavirus cases have been increasing in Louisiana: Last week, Edwards said the gains the people of Louisiana made against Covid-19 in June had been wiped out in a matter of weeks.

The state has reported almost 80,000 cases of coronavirus since the pandemic began. Here's the parish-by-parish look of where those cases have been recorded: 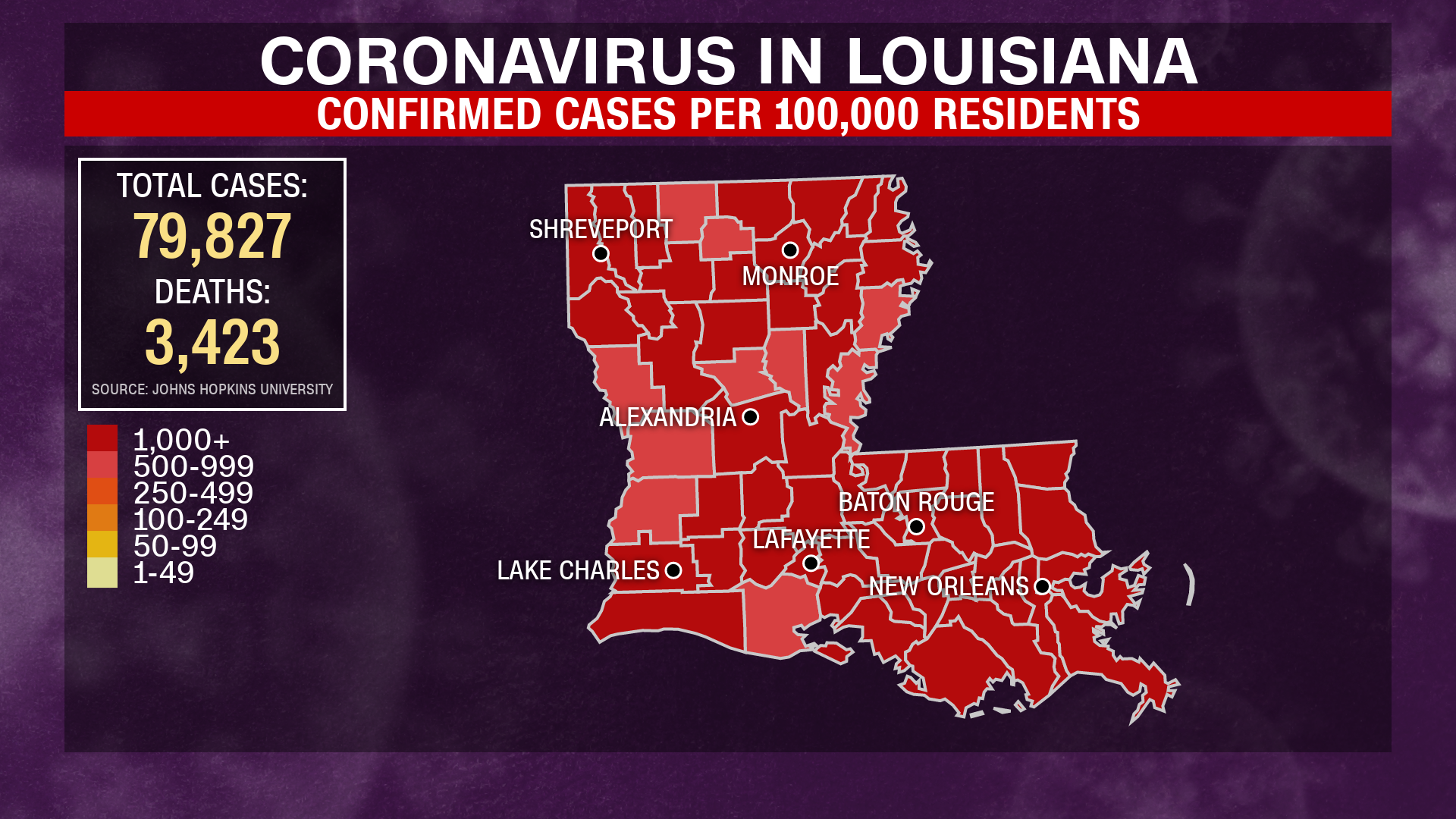 As the coronavirus surges across the US, Virginia Rep. Morgan Griffith, a Republican, has tested positive for coronavirus.

After developing symptoms, he took a test and has since been isolating, according to his office. He does not currently have “significant symptoms,” the statement said.

Griffith's office said the congressman "will continue to self-isolate as he performs his duties on behalf of Virginia’s Ninth Congressional District."

Dr. Robert Redfield, the head of the US Centers for Disease Control and Prevention, said the nation is in a much better place than it was in the spring, because it has a much lower mortality rate, but said “we’re not out of the woods for this.”

Speaking during a webinar with the Buck Institute on Tuesday, Redfield said there is still “obvious transmission” occurring throughout the nation right now.

“Now we're seeing, obviously significant infection, but the age of infection has dropped by a decade and a half, if we look at it, and clearly the relationship between the number of cases diagnosed, and actually having significant morbidity mortality has shifted substantially,” he said.

“While we've made a lot of progress, we still have a ways to go in terms of getting this under control," the CDC director said.