Citing the lag in processing for the high volume of tests, the state of California released new guidance on who can be tested for Covid-19.

Here are the guidelines for each tier of testing:

“Our testing capacity has increased exponentially in recent months. At the same time, new national supply chain challenges and large volumes of specimens sent to commercial laboratories have resulted in growing delays in processing times," Dr. Mark Ghaly, state Health and Human Services Secretary, said. "Consequently, it is critical we continue to be deliberate and creative about testing. We must do this so that testing is readily available and affordable to those who need it, especially those communities experiencing the worst impacts of Covid-19 and those who are at the highest risk."

The 7,200 Moroccan seasonal workers, stranded in Spain due to Morocco's closed borders, "will return to their country in the next few days" after being tested for Covid-19, a spokesperson for the Spanish Foreign Ministry told CNN.

The seasonal farm workers, most of them women, arrived in Spain to pick fruit in March, but found themselves trapped in Spain's southern Huelva province when the season ended in May.

The Spanish government's decision to return the workers was made after days of negotiations between the Moroccan government, the Spanish Migrations Department and the Regional government of Andalusia — which includes Huelva province.

"The government of Andalusia will facilitate the performance of PCR [polymerase chain reaction] for these workers, as demanded by the Moroccan government", the spokesman said.

The Andalusia government aims to do a 1,000 tests a day, a spokeswoman for Interfresa, one of the biggest strawberry pickers associations in Spain, told CNN.

"The first 1,200 workers will leave in Saturday from Hueva's port on a Moroccan ferry," Ana López, spokeswoman for the government's delegation in Andalusia confirmed to CNN.

The news will come as a relief for the works, who have been surviving on almost no money and living in precarious conditions, according to a statement released earlier last week by a group of Spanish and Moroccan non-governmental human rights organizations, including local Andalusian group Mujeres 24h. 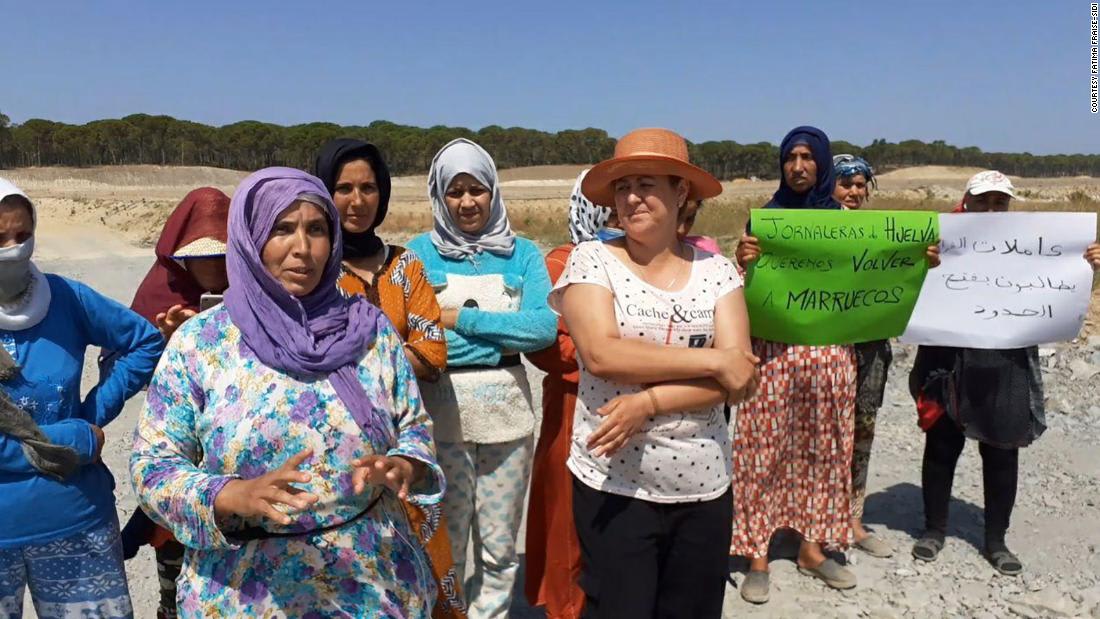 Russia is lifting mandatory two-week quarantine for arriving visitors starting today, according to a government decree posted by the health authorities.

Starting today, both Russian and international travelers will have to bring to the border a coronavirus test result obtained in the past three days or take the test within three days of arrival.

Self-quarantine remains mandatory for those who test positively.

This is the latest move by the Russian authorities to open up the country after claiming the rapid spread of the virus has been contained.

Last week, Deputy Prime Prime Minister Tatyana Golikova announced that Russia will gradually restore international flights to several countries starting today, depending on the epidemiological situation and course of negotiations with other governments.

The latest numbers: On Wednesday, Russia reported 6,422 new cases of coronavirus, bringing the total number of confirmed cases to at least 746,369. According to Rospotrebnadzor, at least 523,249 have recovered.

British Prime Minister Boris Johnson committed to an eventual independent inquiry into “what happened” in the UK during the coronavirus pandemic, but added that now is not the time for it.

“Of course we will seek to learn the lessons of this pandemic in the future,” Johnson told the House of Commons during parliament’s weekly prime minister’s questions on Wednesday.

Johnson also told lawmakers he cannot “simply with a magic wand” ensure every job is retained throughout this period.

When asked by opposition leader Keir Starmer if he would personally intervene in reports that airline British Airways are re-hiring staff on worse terms, Johnson said the government is “absolutely clear” they want companies to keep workers in employment “where they possibly can.”

“No one should underestimate the scale of the challenge this country faces,” Johnson said, assuring the government is doing a “huge amount” to help the aviation sector.

Hong Kong recorded 19 new coronavirus cases and one death on Wednesday — the first day the city implemented social distancing measures as it battles a new rise in infections.

Of the new cases, 14 are locally transmitted — including three cases related to a restaurant cluster in Tze Wan Shan, officials said. Five cases were imported, including seafarers and domestic helpers from the Philippines, as well as a flight attendant from India.

The health authority said the city will be increasing the number of tests, but will have to give priority to people with symptoms and those who are admitted to hospitals as potential case numbers rise.

Hong Kong’s total number of Covid-19 cases is now at 1,588, with nine deaths. The city has recorded 236 locally transmitted cases including 83 untraced infections since the "third wave" began in early July.

More than 400 million people across three Indian states will re-enter lockdown, weeks after a nationwide lockdown was lifted on May 30.

This comes after India recorded 100,000 new coronavirus cases in the past five days as the country struggles to gain control of the worsening pandemic.

State and city-wide measures: As cases and deaths continue to soar in India, two of its most populous states -- Bihar and Uttar Pradesh -- announced various lockdown restrictions.

Bihar's government announced a 16-day long state-wide lockdown on Tuesday, which would come into effect from July 16, while Uttar Pradesh's government said Sunday that a lockdown will take place every weekend until the end of July.

Both states had previously lifted their lockdowns on May 30 except for districts with a high number of cases.

The city of Bengaluru, in Karnataka state, which had also initially lifted restrictions, went into a week-long lockdown on Tuesday until July 22. This comes after the state of Maharashtra reinstated a lockdown on June 29 until July 31.

India began easing lockdown restrictions on May 30, but certain states such as West Bengal and Jharkhand continued to have lockdown measures and restrictions on movement, with the exception of certain essential services.

More than 100 million people in these states have remained under lockdown restrictions since late March.

In the capital, New Delhi, where there are no overarching lockdown measures, restrictions continue in its "containment zones," which include more than 600 localities as of Monday, according to the territory’s Revenue Department. 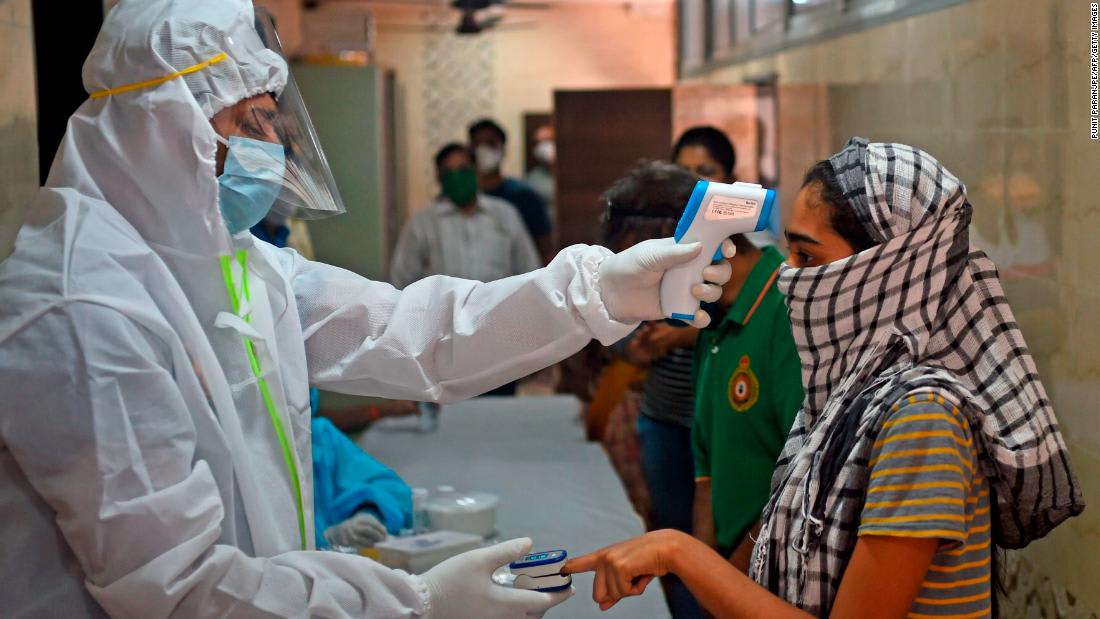 “Today we announce no deaths related to COVID-19 in the UAE in the last 24 hours. Our deepest gratitude to our frontline heroes and to society for their commitment to adhering to precautionary measures. We must continue our collective efforts in tackling this challenge."

The last time the UAE had no deaths was April 18, according to Ministry of Health data.

On Tuesday, 375 more cases were recorded in the Emirates bringing up the total number of cases to 55,573, of which more than 46,000 recovered, according to the Health Ministry.

Overall the UAE has conducted more than 4 million tests in the country of 11 million, Minister of Health and Prevention Abdul Rahman Al Owais said on Monday, according to the UAE government office's Twitter account.

In June the United Arab Emirates (UAE) and China launched a Phase 3 clinical trial of a coronavirus vaccine, according to the China National Biotec Group (CNBG) and UAE state media.

Drugmakers globally are working to find a coronavirus vaccine. It's unclear if or when a vaccine will be available to the public as of yet, but researchers hope to produce one by early 2021.

Britain's Queen Elizabeth II is expected to appear at her first public engagement in months on Friday to knight Captain Tom Moore, the 100-year-old English war veteran who became a national celebrity after raising than $40 million for the UK's National Health Service.

The investiture – the first since the Queen moved to Windsor Castle in March amid the pandemic -- will be attended by members of Moore's family, according to a Buckingham Palace statement.

The event will mark the 94-year-old monarch's first in-person public engagement since her schedule was scaled back. Previous engagements with members of the public during the pandemic have been carried out virtually.

The Queen did attend a military ceremony in Windsor Castle to mark her official birthday in June, but it was not open to members of the public.

The award for Moore, who turned 100 at the end of April, was announced by Downing Street on May 20.

The World War II veteran raised a record amount for the NHS in its battle against the coronavirus by walking around his garden in Bedfordshire, southeast England, with the help of a frame.

The governor of the Japanese prefecture of Okinawa is asking that two US Marine Corps facilities there be put into lockdown after 36 new Covid-19 cases were revealed at one of them Wednesday.

The new cases at the US Marine Corps’ Camp Hansen bring to 136 the number of coronavirus cases reported at US military bases in Japan since July 1, according to the government in Okinawa. Almost all of those cases are on Okinawa.

Gov. Denny Tamaki told CNN in an exclusive interview on Wednesday that Camp Hansen and Marine Corps Air Station Futenma, which have the most virus cases, should be put into lockdown.

He also said no new US military personnel should be allowed to transfer into Okinawa from the United States.

“Honestly, I have doubts about whether adequate precautions are being taken to prevent the virus from spreading."

He said he has received no response to his requests from US interim Ambassador to Japan Joseph Young or Japanese Defense Minister Taro Kono.