Another 1.3 million people filed first-time jobless claims last week in the US, according to the Department of Labor. That's down 10,000 from the prior week's revised level.

Weekly first-time unemployment applications have been on the decline for more than three months since their peak in the last week of March.

Continued claims, which count workers who have filed claims for at least two weeks in a row, stood at 17.3 million for the week ending July 4, down 422,000 from the prior week. These claims peaked in May at nearly 25 million.

At least 39 states reported an increase in the number of new cases from the week before.

Some of the hard-hit states to watch today are California, Florida, Arizona and Texas, where surging coronavirus cases have led to a shortage of hospital beds.

Just two states — Delaware and Maine — are reporting a decrease in cases. The other nine states are seeing steady week-to-week cases.

Here's a look at where cases are rising and falling across the US: 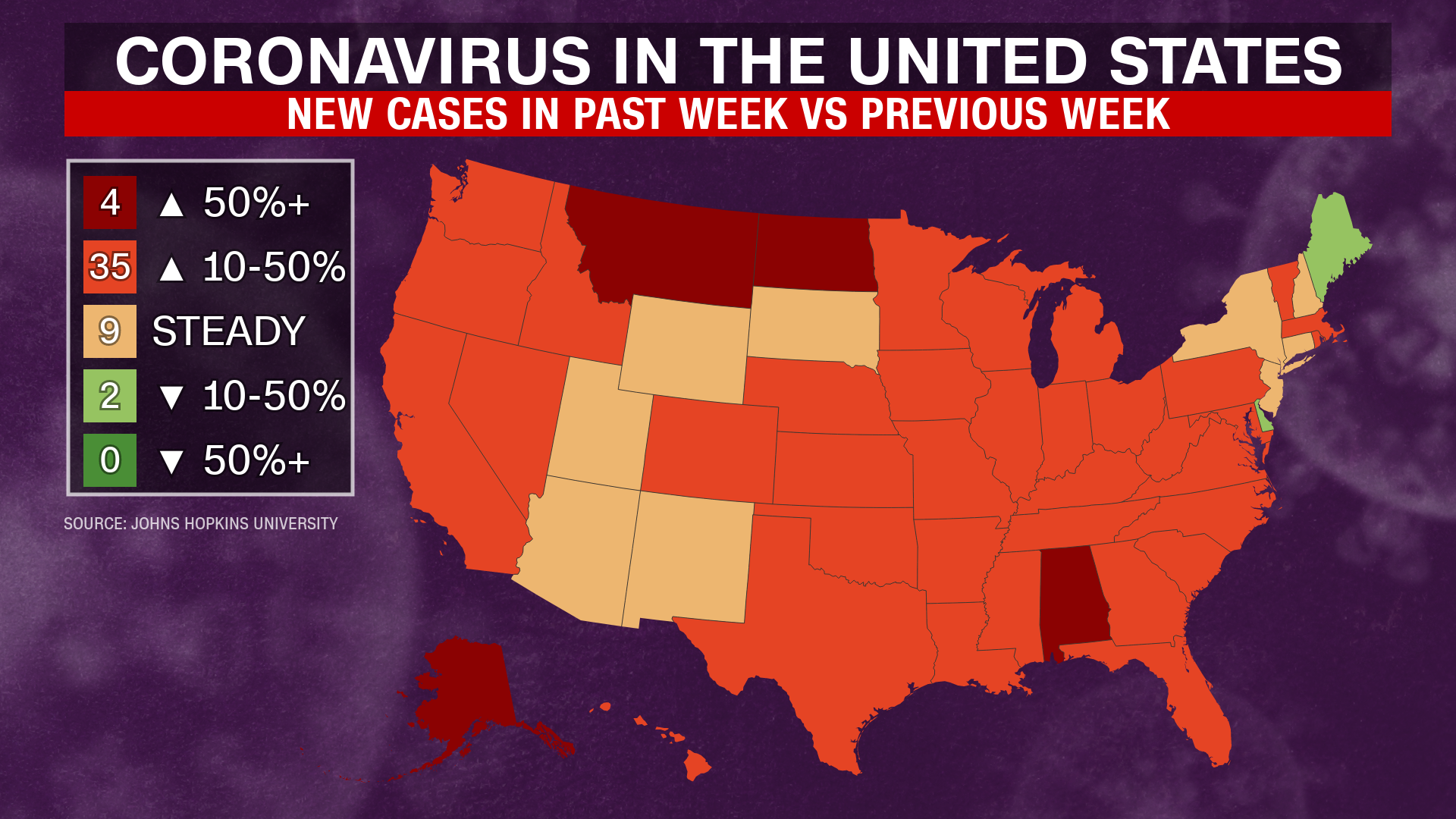 This weekend’s races at the Del Mar Thoroughbred Club (DMTC) in California's San Diego County have been called off after 15 jockeys tested positive for coronavirus.

The jockeys were asymptomatic and all but one had recently rode at the Los Alamitos meet in Orange County earlier this month.

The club ordered testing for jockeys and personnel after two riders, Flavien Prat and Victor Espinoza, tested positive, according to the DMTC.

"Assuming these individuals continue to show no symptoms, they will be isolated for a total of 10 days and should be able to resume their usual activities, including riding after that time,” Dr. Eric McDonald, medical director of epidemiology and immunizations services of the County of San Diego, said.

What happens next: The club will only allow California-based jockeys to ride at the club. Del Mar is also expanding the jockey’s quarters and creating more space for various race functions.

The current summer meet is held without spectators, the first time in its 81-year history. The summer meet began on July 10 and continues through Labor Day and many of the races scheduled for this weekend are postponed one week.

With skyrocketing coronavirus hospitalizations in several states, hard-hit counties in Arizona and Texas are preparing for the worst by bringing in refrigerated trucks as morgues fill up.

In Arizona's Maricopa County, which has the most Covid-19 cases in the state, the medical examiner's office has ordered four portable coolers with additional ones expected in the coming days, said Fields Moseley, the county spokesperson.

The medical examiner's office morgue had a total of 156 deceased people — with a surge capacity of just over 200, Moseley said Wednesday.

It is unclear how many of the deaths are related to the coronavirus — the county has said fatalities go up in the summer due to the heat.

"Because we hit that surge capacity, multiple phone calls were made to funeral homes all over the county to try to assess their ability to make sure they were taking bodies in a timely fashion," Moseley said.

Two counties in Texas  — Cameron and Hidalgo  — are sharing a large refrigerated trailer to store bodies of coronavirus patients because of a lack of space at the morgues. San Antonio officials have also said they're requesting refrigerated trucks.

"I'm pleading with everybody in our neck of the woods, help us do your part, people's lives are at stake  — not just the people getting sick, but doctors, nurses working to the bone, EMS personnel, transporting people," Cameron County Judge Eddie Treviño Jr. told CNN affiliate KVEO.

It's Thursday morning in the US, where the total number of coronavirus cases is nearing 3.5 million, according to Johns Hopkins University data.

If you're just reading in, here's what you need to know to start the day:

Wearing masks in indoor public spaces in France will be mandatory from next week, French Prime Minister Jean Castex told the country's Senate on Thursday.

The government was considering implementing the new rule on August 1, but Castex said he had “heard and understood that this deadline seemed too late."

The PM added that wearing masks was an "efficient protective measure” against coronavirus.

The government has joined other European nations in changing its stance on wearing protective masks.

In March, the government said that “wearing a mask [was] not recommended for people without symptoms." But by May, Director for National Health Agency Jérôme Salomon said officials were "adapting our position."

"We are re-evaluating our knowledge," Salomon said at the time.

Encouraging the public to wear masks has since become part of the government's coronavirus strategy. Wearing masks is already mandatory for people using public transport in France.

Hong Kong's health officials are grappling with new cases of Covid-19 after a surge in local transmissions.

The city had been praised for its quick and effective response to the pandemic during its first wave of cases.

Sixty-seven new cases of Covid-19 were recorded in the city on Thursday, 63 of which were locally transmitted and four were imported, health officials said Thursday.

Thirty-five of the cases came from unknown sources.

Two deaths were reported Wednesday, bringing the death toll for the city to 10 and total case numbers to 1,655.

“In the past two weeks, from July 2 to July 15, there were 355 confirmed cases, around 65% [of which] are locally transmitted," said Dr. Chui Tak-yi , Undersecretary for Food and Health.
"There are also several cluster outbreaks involving different districts. To cope with the latest epidemic situation in Hong Kong, the government has already tightened the epidemic measures and social-distancing measures, in order to minimize the virus transmission risk in the community,” he added.

Dr. Chuang Shuk-kwan, from the Center for Health Protection, said staff and customers at restaurants were among the confirmed cases, a pattern that officials believed was “compatible” with the nature of the virus.

“When you remove the mask, you can talk and eat and you can spread [the virus],” Dr Chuang said, adding that similar patterns had also been observed with taxi drivers and other customer-facing workers.

Although Hong Kong recorded the highest number of confirmed cases Thursday since the start of its so-called "third wave," Chuang warned the city has not yet seen the peak.

“I cannot say that this is a peak, because usually you can only say this is a peak afterwards. So there's still a chance that more cases are coming,” she said.

England cricketer Jofra Archer has been “excluded” from playing in the second Test Match against the West Indies following a breach of his team's bio-secure protocols, the England and Wales Cricket Board (ECB) said on Thursday.

The fast bowler had been named in the 13-man squad on Wednesday, for the match that begins in Manchester on Thursday.

The England team's three-match Test series against West Indies is being played behind closed doors in a so-called bio-secure “bubble,” meaning players are restricted to living in the hotels of the two grounds being used – Ageas Bowl in Southampton and Emirates Old Trafford in Manchester. The cricketers are also subject to regular Covid-19 tests.

The ECB did not specify the nature of Archer's breach.

The cricketer will now have to isolate for five days, during which he will take two Covid-19 tests, both of which must be negative before he can return to the England squad.

The West Indies team said they were “satisfied with the measures that have been imposed.”

“I am extremely sorry for what I have done,” said Archer in a statement.
“I have put, not only myself, but the whole team and management in danger. I fully accept the consequences of my actions, and I want to sincerely apologize to everyone in the bio-secure bubble.
“It deeply pains me to be missing the Test match, especially with the series poised. I feel like I have let both teams down, and again I am sorry.”

Archer, 25, has taken 33 wickets in eight Test matches for England, which trails the three-Test Match series 1-0.

Despite the spike in cases, the death toll across the country remains low, the NICD said.

That high number of cases and low death rate is mirrored in countries across the African continent, Dr. John Nkengasong, the Director of the Africa Centers for Disease Control (Africa CDC) said at a press conference Thursday in Addis Ababa.

Nkengasong said the rise in cases recorded across the continent was driven by the situation in South Africa and a handful of other countries.

“Our pandemic has gathered pace and is increasing rapidly, but the pandemic across Africa is very heterogenous,” he said.

Nkengasong said there had been a 23% increase in new cases across Africa, largely driven by outbreaks in South Africa, Egypt, Nigeria, Ghana and Algeria.

He said it was understandable that African countries were reopening their economies but also called for increased testing.

“We cannot remain on lockdown forever. You don’t fight a war by retreating and staying behind closed doors. You have to go out and fight the enemy. It is not a choice of saving lives and saving the economy.” he said.
“We need to ramp up testing, we need to trace those who are infected and isolate them and make provisions with appropriate treatment." The official added that community engagement was critical for contact tracing and care.
Nkengasong also called on all African countries to ensure universal mask wearing. “We should all wear masks in public places,” he said.