There were more than 1,000 new Covid-19 cases reported in Pennsylvania, the state's Department of Health said in a release.

The state added 1,032 additional positive cases of Covid-19, bringing the statewide total to at least 99,478.

There were 19 more deaths reported, bringing the statewide death toll to at least 6,992.

The state's health department said it is seeing significant increases in the number cases in younger age groups, particularly in 19- to 24-year-olds.

Note: These numbers were released by Pennsylvania state’s public health agency, and they may not line up exactly in real time with CNN’s database, which is drawn from Johns Hopkins University and the Covid Tracking Project.

There have been at least 3,592,316 cases of coronavirus in the US and at least 138,543 people have died from the virus in the country since the start of the pandemic, according to Johns Hopkins University's tally.

Meanwhile, at least 38 states are seeing an increase in new cases compared to the previous week.

Here's a look at where cases are increasing: 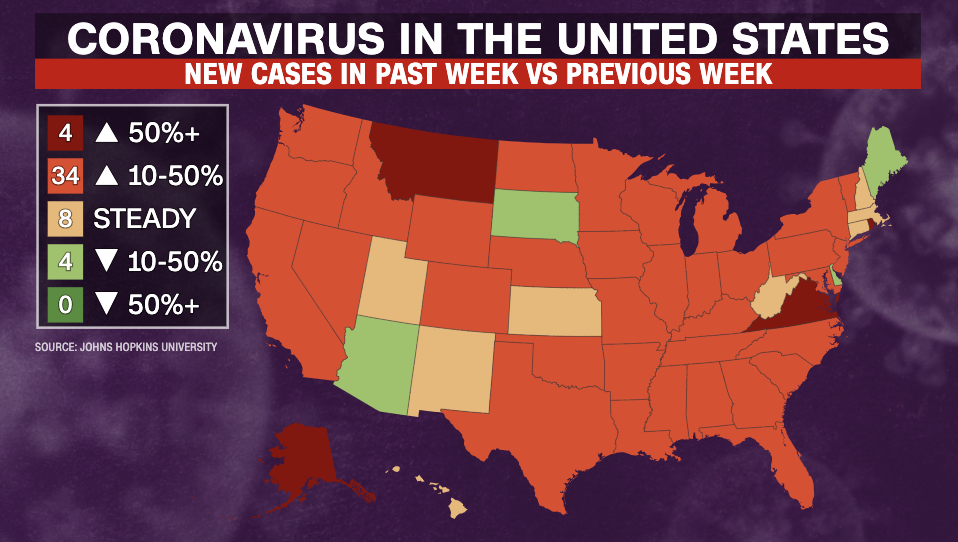 Dr. Anthony Fauci, the director of the National Institute of Allergy and Infectious Diseases, said the US will one day "get back to normal."

“We feel cautiously optimistic that we are on the road — as bleak as it may sound right now — that we're on the road of getting this under control,” Fauci said during a US Chamber of Commerce virtual event on Friday.

“We will ultimately get back to normal,” he added.

Fauci said the US has been "going through this very difficult period for the last five and a half, six months," but assured people "it will end."

“Sometimes you get so exasperated and run down by it, that you think is never going to end. It will end. It will end through public health measures and science, I can tell you, will come to our rescue," he said.

Spain recorded 628 new coronavirus cases in the last 24 hours, the highest number since May 8, the Spanish Health Ministry’s data showed on Friday.

The total number of cases in Spain has now reached at least 260,255. The data also shows that more than half of those new cases were registered in the outbreak-hit regions of Catalonia and Aragon.

Florida’s health officials reported 11,466 new cases of Covid-19 and 128 new deaths on Friday, according to data released by the Florida Department of Health.

The state has reported more than 100 deaths for four straight days now.

This brings the state’s total cases to at least 327,241, Health Department data shows. The statewide resident death toll is now 4,805, the data shows.

You can find the the state's latest data here.

Dr. Anthony Fauci, who is speaking live now during a US Chamber of Commerce virtual event, said the United States needs to concentrate on what’s happening right now with coronavirus cases.

“People keep talking about the possibility of a second wave in the fall — that's a historic terminology related to another time and another outbreak. I think we need to concentrate on where we are right now,” the nation's leading expert on infectious diseases said.

Fauci said the US is “essentially still in the first wave.”

“When you're having up to 70,000 new infections in certain areas of the country, that's something you need to focus on right now, as opposed to looking at what's going to happen in September or October,” he said.

Miami Dade Mayor Carlos Giménez said today that the county has not exceeded the ICU capacity, although the county's dashboard showed that the capacity is at 107%.

Giménez said in a news conference this morning that the 107% number is of the "normal capacity" but that they have not reached "absolute capacity."

He explained that hospitals have the ability to add hundreds of ICU beds by not having elective surgeries, which allows for the hospitals to convert the recovery rooms into ICU rooms. He also said that the number of beds available is a rolling number.

He did say that the county needs additional medical personnel to staff the additional beds and that Gov. Ron DeSantis is helping with that request.

Colombian doctors are urging president Iván Duque to impose a strict lockdown in the city of Bogota and the most affected areas of the country after record increases in both Covid-19 cases and related deaths were reported on Thursday.

Dr. Herman Bayona, president of the College of Doctors of Bogota told CNN on Friday: "It's evident that the virus is spreading faster than our capacity to treat patients and test them. This week has been a remarkable acceleration."

ICUs occupancy rate is over 90% in Bogota, Bayona added.

Bayona also stressed that thousands of new Covid-19 cases have been reported from regions that so far were lightly affected by the pandemic, signaling Covid-19 is no longer confined in the main two hotspots in Bogota and the Atlantic coast.

The country's president has so far resisted calls to re-impose lockdowns after they were partially lifted at the beginning of June.

“To think that the only alternative is only a total lockdown clearly cannot be the solution” Duque told a local radio station on Thursday responding to recent criticism.

Some context: Earlier in the week, 14 medical associations published an open letter calling authorities for a total lockdown to be imposed in Colombia’s capital with immediate effect.

Several of Colombia's largest cities — such as Bogota, Barranquilla and Cartagena — are currently under localized lockdowns imposed by local authorities rather than a centralized plan mandated by the government.

The mayor of the city of Miami, Francis Suarez, told CNN on Thursday that the city is a few days away from a possible shutdown. Miami-Dade Mayor Carlos Giménez said today the county is not there yet.

In a press call today, Giménez said that while he doesn't think Suarez meant that he was thinking of shutting down today or tomorrow, they'll be discussing the statement later today in a meeting with all of the county mayors.

He said that while the city of Miami is the biggest city in the county, it only represents 15% of the population.

Giménez said that the decision to implement a shut down will be driven by the data.

"The decisions that we make could cause irreparable damage, not in a healthy perspective, but on economic basis for a long, long time," Giménez said. "I take this very seriously. And I will speak to my medical advisors, you know, on what the next steps should be if we have to take them."

Latest figures: Miami-Dade, considered Florida's epicenter of the virus, has seen an increase in the number of Covid-19 patients being hospitalized (46%), in the number of ICU beds being used (54%) and in the use of ventilators (86%), according to the county's latest data.

Earlier today, a spokesperson for Giménez said in a statement to CNN's Rosa Flores that Miami-Dade's "hospitals have more Covid patients in ICU beds than they have available ICU beds." The ICU capacity "figure is above 100 percent," the statement says.