For five consecutive days, Florida has led the nation in coronavirus cases per capita.

Currently, Florida is averaging just over 55 cases per 100,000 people according to analysis of Johns Hopkins University data.

Florida took over the top spot from Arizona on Monday. Arizona — which had held the top spot for over a month — has now dropped to third as of today. Currently the top three per capita states, based on the 7-day average of new cases, are:

Here's a look at the cases across all of Florida's counties: 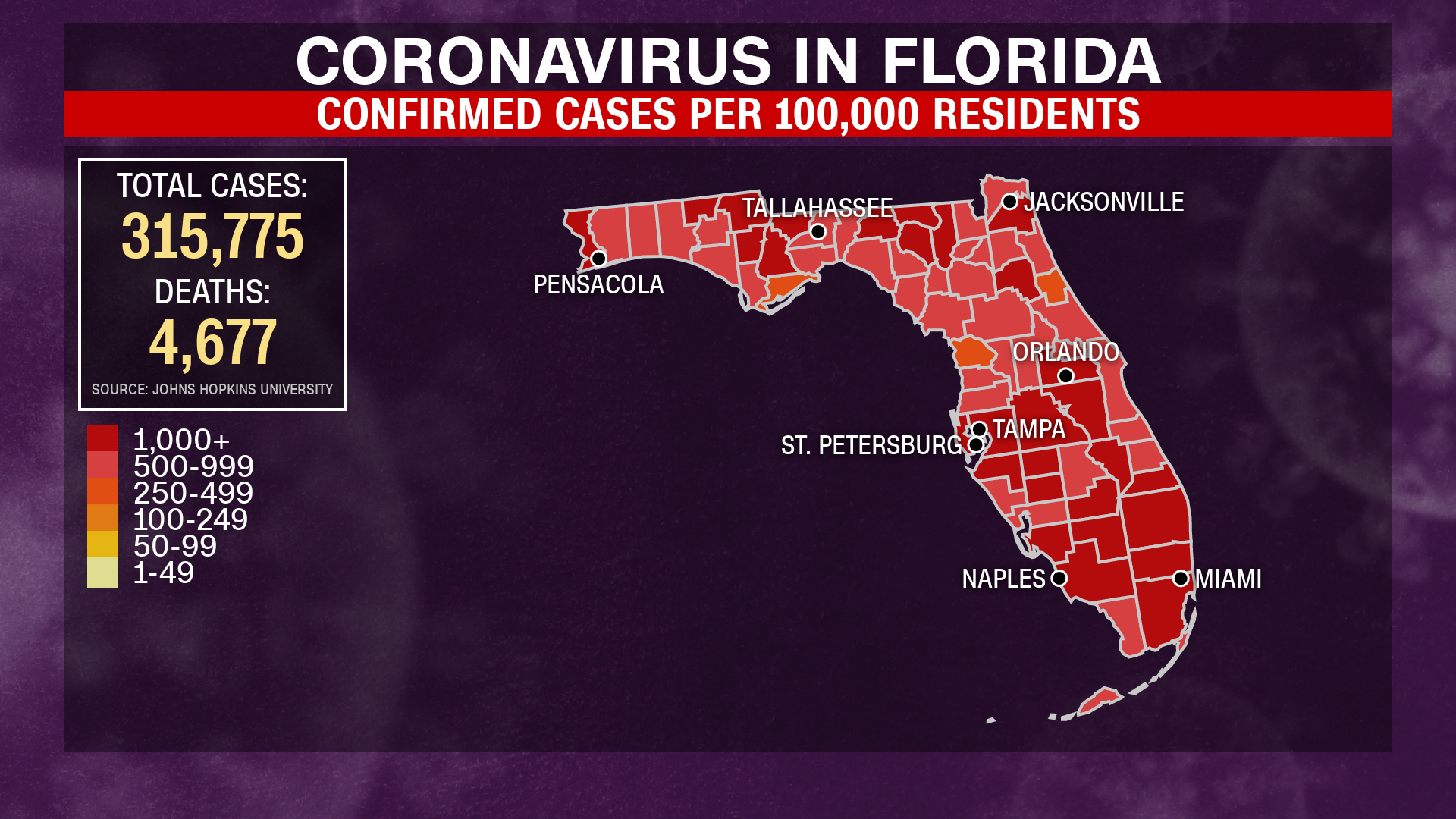 The test positivity rate in the state is on average 13.6% and hospitalizations have increased 39% over the past week, Toomey said.

“Gwinnett, Fulton and DeKalb counties have the highest number of new cases over the past three weeks, accounting for nearly 26% of all the new cases in the state,” she said. “We continue to see outbreaks in workplaces, in businesses, in congregant settings, daycares, camps, fraternity housing, many churches and any place where there are a large number of people gathering.”

Toomey said getting children back into schools is important because children not in the classroom suffer from developmental challenges.

She said she and Gov. Brian Kemp met with White House task force coordinator Dr. Deborah Birx and Director of the US Centers for Disease Control Dr. Robert Redfield. They discussed a wide range of coronavirus-related topics, including getting children back to school.

Toomey said they have crafted guidelines and fully expect some cases of Covid-19 in the classroom, but schools will be given resources and cases would be followed up by the nearly 1,300 contact tracers in the state. A single case of Covid-19 would not shut down schools, Toomey said.

Atlanta Mayor Keisha Lance Bottoms says that she doesn't think it is happenstance that the lawsuit brought against her by Georgia Gov. Brian Kemp came the day after President Trump visited, and she pointed out that he was violating city law by not wearing a mask.

She said she thinks Kemp "is putting politics over people."

"It's interesting even when you look at the decision making of our governor, and I'll remind you, this is the same governor who didn't know until well into the pandemic that it could be spread by asymptomatic transmission," Lance Bottoms said in an interview on the Today show this morning,

"He didn't go to Emory for guidance he didn't go to the CDC for guidance. He went to Augusta University which I'm sure is a fine University in our state but it's certainly not Emory University or the CDC in terms of its expertise with infectious disease control, so he was searching for an answer. He got it. And it's the same answer and the same playbook that we've seen come out of the White House," she added.

Some context: Kemp filed a lawsuit against Lance Bottoms over Atlanta's mask mandate, citing the measure violates his emergency orders prohibiting local leaders from adding to the state's requirements to protect against coronavirus.

Also cited is Lance Bottoms' request that the city roll back to a phase one level of reopening. In a statement issued earlier this month, Kemp has called this "confusing guidance" for businesses and Atlanta residents.

The mayor says that she will "absolutely" prevail in court.

"At the end of the day, this is about saving lives, over 3,100 people have died in our state 106,000 have tested positive — myself, my husband and one of my children are among the positive. I'm in quarantine as we speak. So I take this very seriously, and I will continue to do everything in my power to protect the people of Atlanta, and the Governor has simply overstepped his bounds in his authority, and we'll see him in court," she said.

It's Friday morning in the US, and the Covid-19 pandemic is still raging across the country. At least 77,255 new coronavirus cases were reported yesterday, breaking a previous high set two days ago, according to Johns Hopkins University.

If you're just reading in, here's what you need to know about the pandemic in the US today:

Dr. Francis Collins, director of the National Institutes of Health (NIH), says the idea of firing or demoting Dr. Anthony Fauci is “unimaginable.”

“This is a remarkable scientist who has led NIH’s efforts in infectious disease with great distinction for more than 30 years, and who continues to be our lead in vaccines and therapeutics for Covid-19,” Collins told STAT News on Friday. “The idea of losing that leadership at this critical moment for our nation is unthinkable.”

Fauci currently serves as director of the National Institute of Allergy and Infectious Diseases, which is part of NIH. Collins is Fauci's boss.

When asked if he would dismiss Fauci if it was ordered by government officials such as the President or the secretary of the US Department of Health and Human Services, STAT reported that “Collins only laughed” and said, “I think you heard my answer.”

STAT also reported that Collins “touted Fauci’s decades long scientific acumen as a national asset,” and said this was especially critical at this time.

Some background: Trump on Monday sought to downplay tension with Fauci after a White House official shared a statement that appeared to undermine the nation's leading infectious disease expert.

"I have a very good relationship with Dr. Fauci, I've had for a long time," Trump said at the White House during a roundtable event honoring police officers. "I find him to be a very nice person. I don't always agree with him."

Under federal law, Trump doesn't have the power to directly fire Fauci, a career civil servant, and remove him from government. And while Trump could try ordering his political appointees to dismiss the director of the National Institute of Allergy and Infectious, Fauci could appeal, making way for a time-consuming process.

People who want to leave their faces uncovered on California's Manhattan Beach may face citations of up to $350.

Maskless first offenders in the Southern California beach town will be fined $100, followed by $200 and $350 citations for the second and third violations.

“The drastic increase in positive Covid-19 cases in our city and around Los Angeles County have shown us that additional measures must be taken to make it clear to the public that face coverings are essential right now. The time for warnings is over. Face coverings must be worn when you are outside of your home in order to prevent the spread of Covid-19,” Mayor Richard Montgomery said in a press release. “If we do not take this action, Gov. Gavin Newsom could expand businesses sector closures and thereafter, close our treasured beaches once again. We want to do the right thing and be proactive to avoid additional negative consequences.”

India will allow scheduled international flights into the country, despite the nation recording more than 1 million coronavirus cases and restricting people in multiple states from leaving their homes in local lockdowns.

During a news conference on Thursday, Minister of Civil Aviation Hardeep Singh Puri confirmed the establishment of "air bubbles" between India and the US, France and Germany.

Until international civil aviation can reclaim its pre-Covid situation in terms of numbers, the answer lies through these bilateral air bubbles, which will carry as many people as possible but under defined conditions," said Puri.
"Because many countries are still imposing entry restrictions, as are we, it's not that anyone can travel from anywhere to anywhere. You need permission."

On Friday India registered a record 34,956 new infections in just 24 hours. On the same day, more than 400 million people in Bihar, Uttar Pradesh, and Karantaka's capital city Bengaluru re-entered lockdown conditions after a spike in cases.

Due to the Covid-19 pandemic, international passenger flights have been suspended in India since March 23, with the exception of repatriation flights.

As of July 15, nearly 690,000 Indian nationals have flown home on these flights, according to the latest data from the Ministry of Civil Aviation.

The chances of European Union leaders agreeing on a coronavirus recovery fund by Sunday are “less than 50%,” Dutch Prime Minister Mark Rutte said in Brussels on Friday.

“But let's be hopeful -- you never know,” Rutte added.

In May, the EU proposed a recovery fund worth €750 billion ($854 billion) – with a plan for two thirds of that money to be distributed to countries via grants, and the remainder being offered as loans.

The proposal has caused divisions within the EU, with a group of nations known as the “Frugal Four” – Austria, the Netherlands, Sweden and Denmark – rejecting the compromise and favoring only loans.

EU leaders met Friday for a summit on the issue. Asked on Friday what compromise would allow for a deal, Rutte said: “That's one of the questions which we have to answer. But we could still get to a compromise, it is still possible.”

The Dutch PM added that his country did not believe in a grants-based system.

“We need reforms," he said. "So that if the south [of Europe] is needing help from other countries to cope with the crisis, I understand that, and because there is limited scope to deal with that financially themselves.
"Then I think it is only reasonable for us to ask for a clear commitment to reforms. If then loans have to be converted to a certain extent into grants, then the reforms are even more crucial, and the absolute guarantee that they have taken place."
Rutte rejected suggestions that he was the "bad guy" in the negotiations, saying:  “I'm fighting for Europe… a stronger European Union which is very much in the interests of everybody, including of course the Dutch citizens. A strong Europe which is economically more competitive and can play, with confidence, a strong role on the world stage. That's what at stake.”

Hong Kong’s Department of Health reported 58 new Covid-19 cases on Friday, as the city's health officials continue to grapple with a third wave of cases.

Fifty of the new cases were locally transmitted and 18 are from unknown sources.

“There are a lot of cases with unknown sources. We need to pay attention on the situation and there may be a bigger outbreak,” Dr. Chuang Shuk-kwan of Hong Kong’s Centre for Health Protection said.

Experts have linked the spike in cases to the easing of social distancing measures -- and potentially a mutation that could make the virus more infectious.