The ability to distribute vaccines and the fear that the rush to make a vaccine may make it unsafe are significant concerns, according to Dr. Francis Collins, director of the National Institutes of Health. But, he said it’s important to look at the positive side.

“This has been an amazing trajectory that we’ve been on,” Collins said, talking on NBC’s Meet the Press.

Within a day or two of getting the virus genome sequence, he said that a vaccine was already starting to be designed. After 62 days, this was being injected into the first phase one trial participants.

“That data which was just published looks extremely good,” Collins said. “So we’re on a good path here.”

Collins also encouraged people to sign up for vaccine clinical trials, especially is places where the virus is spreading and people who are at higher risk.

Speaking about reports that Russian cyber actors are targeting organizations involved in coronavirus vaccine development, Collins said it wasn’t entirely clear to him what it was all about, but that “most of what we do in science, we publish it, we put it out there, people don’t have to go hacking to find it. We’re all about transparency.”

He also said he wasn’t sure that there was serious risk involved, “mischief, yes, but serious risk, I’m not so sure.”

Pennsylvania reports 786 additional cases of Covid-19 and 8 deaths from the virus, according to a release from the Pennsylvania Department of Health.

“The department is seeing significant increases in the number of COVID-19 cases among younger age groups, particularly 19 to 24-year-olds. An alert was sent to healthcare providers about the changing Covid-19 case demographics, as there are more cases in younger age groups than in those 50-64 and 65+," the release says.

One thing to note: The numbers listed were released by the state of Pennsylvania and may not line up exactly in real time with CNN’s database drawn from Johns Hopkins University and the Covid Tracking Project.

“We Americans are individuals, and if given the appropriate information, and if it’s not sort of confused by a lot of other conspiracy theories, we’re capable of figuring out what to do,” said Dr. Francis Collins, director of the National Institutes of Health.

“If we want to see this current surge, and it’s a real surge, turn around,” he said on NBC’s Meet the Press on Sunday, “all Americans need to recognize it's up to us.”

Collins encouraged wearing a mask when outside the house, social distancing, not convening in large groups, especially indoors, and hand washing.

“We can turn this around and we don’t have to wait for some sort of serious high level edict to say so,” Collins said. “This just makes common sense at this point, it just ought to be something we all do.”

Collins said that a good job was done in New York, New Jersey and Connecticut, and that steps that were put in place meant that those areas came down to close to zero.

“Meanwhile the rest of this country, perhaps imagining this was just a New York problem, kind of went about their business, didn’t really pay that much attention to CDC’s recommendations about the phases necessary to open up safely and jumped over some of those hoops,” said Collins.

People began congregating, not wearing masks and “feeling like it’s over and maybe summer it’ll all go away.”

Collins said that we now have not only 70,000 cases almost every day, but a quite concerning number of hospitalizations, in his perspective, which are almost as high as they were in April.

“We’ve got to really double down here,” said Collins. “We Americans are pretty good at rising to a crisis, we got one now, let’s see what we can do together.” 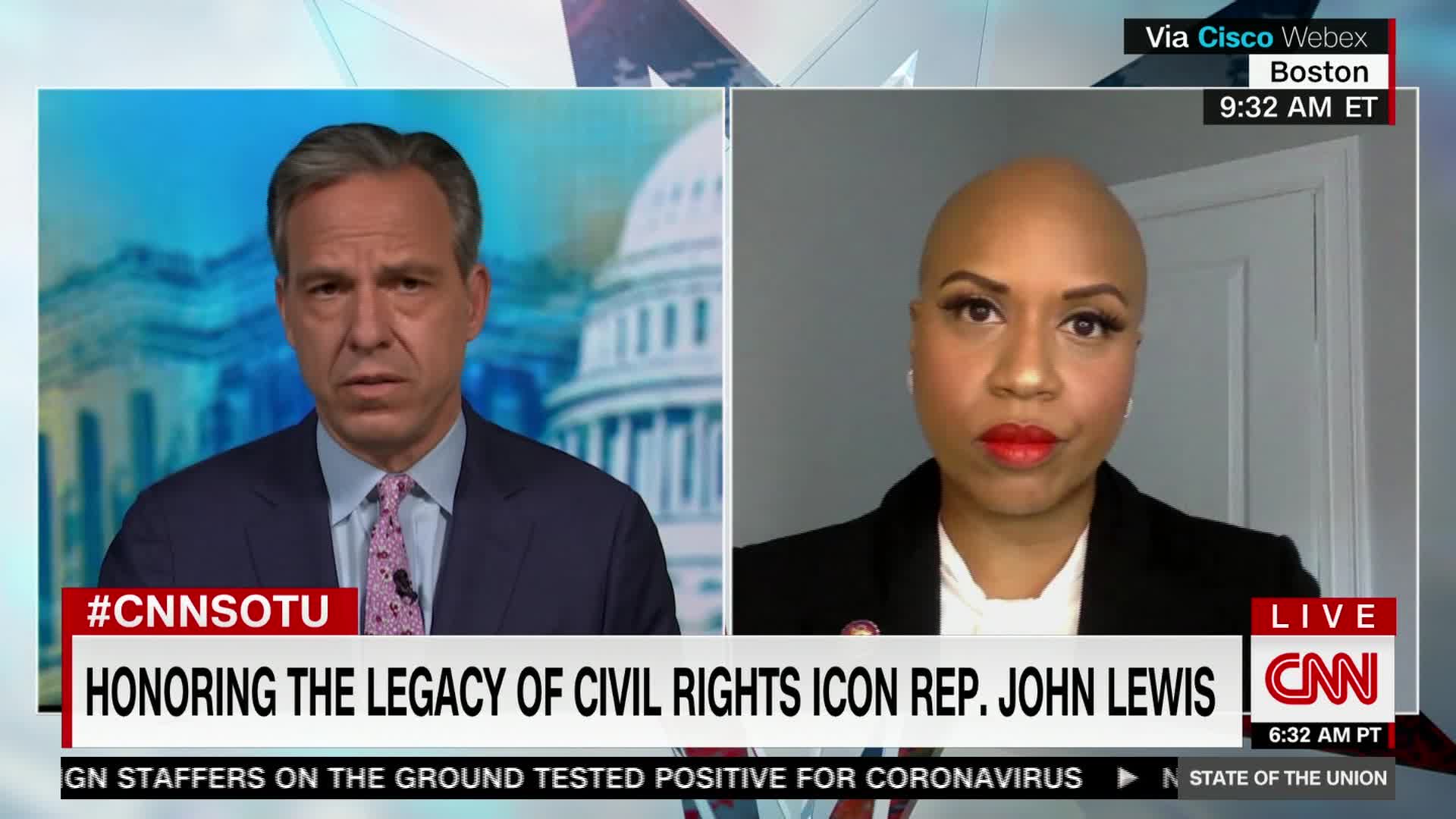 Massachusetts Rep. Ayanna Pressley on Sunday said the nation should not be in a rush to reopen schools amid the coronavirus pandemic and called for Congress to "lead in the absence of this Trump administration."

"We cannot move too quickly on this. The consequences are too great to consider. This is about the public health," the Democrat told CNN's Jake Tapper on "State of The Union." "What needs to happen is Congress needs to continue to act as the conscience of this nation and to lead in the absence of this Trump administration to provide reoccurring payments and to mitigate the financial hardships and the burdens that families are feeling. To continue to address food insecurity. But we should not rush to reopen schools."

Pressley continued that teachers "have already proven themselves to be courageous and dedicated educators."

"We are now asking them to be caseworkers and in some instances martyrs. And that is unconscionable. Again, we need to pass the HEROES Act which is sitting on the desk of Mitch McConnell which makes massive federal investments to support the reopening of our schools when it is safe and this virus is under control."

More on this: President Donald Trump and members of his administration have pushed for schools to reopen in coming weeks even as the number of coronavirus cases has surged. Some schools districts have announced they would continue remote learning in the fall and some have said they would implement a combination of remote learning and in-person instruction.

Atlanta Mayor Keisha Lance Bottoms once again slammed Georgia Gov. Brian Kemp for the lawsuit against her and members of her city counsel, implying that it could be because she is a woman or her city’s demographics while on CBS’ Face the Nation.

Calling it “bizarre,” she pointed out language from the suit filed Thursday, that asks the judge to stop Bottoms from telling the press in releases and interviews that she has the authority to impose measures outside of ones issued by Kemp himself. Bottoms has accused him of trying to silence her.

“There were other cities in our state who instituted mask mandates and he did not push back then,” she said. “I don't know if perhaps they were led by men or if it's perhaps because of the demographic in the city of Atlanta. I don't know what the answers are. But what I do know is that the science is on our side.”

Bottoms cited the unreleased report from the White House that showed her state was declared a red state for the surging Covid-19 cases. And she pushed back that protests for equality led to spikes in Covid-19 cases. Bottoms says her police do have the ability to enforce her mandates requiring masks and pushing the city back to phase one, as if they were issuing a citation for seatbelts. And she slammed the governor who talks about local control for abusing her own.

“At the end of the day, the party that speaks of local control has taken away local control and attempting to silence our voices in this state,” she said.

"This lawsuit is on behalf of the Atlanta business owners and their hardworking employees who are struggling to survive during these difficult times," Kemp tweeted.

Allegheny County, PA — which includes Pittsburgh and surrounding areas — reports 138 new Covid-19 cases, one new hospitalizations and one additional death from the virus, according to a statement from the Health Department.

“In the newest cases, ages range from 11 months to 93 years old with the median age being 40. Positive results are from tests that span July 3 through July 18,” the release says.

One thing to note: The numbers listed were released by the Allegheny County Health Department and may not line up exactly in real time with CNN’s database drawn from Johns Hopkins University and the Covid Tracking Project.

White House Chief of Staff Mark Meadows Sunday said that the administration has been engaged in discussions on the next stimulus bill for the past week, but negotiations will start “in earnest” Monday on Capitol Hill.

“As we’ve started to engage with our Senate and House colleagues up on Capitol Hill, those will start in earnest starting tomorrow, Monday,” Meadows said in an interview on Fox News.

Some context: The White House and Senate Republicans are at odds over the amount of funding that should be given to the Centers for Disease and Control and Prevention in the next round of stimulus spending, a source with direct knowledge of the matter told CNN on Saturday.

He outlined the administration’s priorities for the next stimulus package: expediting warp speed for treatments and keeping people employed, and making sure there are “protections for the American workers and those that employ individuals.”

“It looks like” the bill will be in the trillion dollar range, Meadows stated.

Meadows added, “bluntly we are looking at a number of areas to look at manufacturing, bringing some of those critical manufacturing jobs back from overseas.”

The Chief of Staff announced that there will be “multiple initiatives” coming out this week, including one on schools.

Meadows said that the President has “already authorized to work Congress” over 70 billion dollars for schools, and that “you will see a very broad five to six points in terms of what we will be doing in terms of making sure that our schools are safe.”

Texas Gov. Greg Abbott announced that five US Navy teams will be deployed Sunday to areas in South and Southwest Texas "to help combat the spread of Covid-19."

The teams will assist at various hospitals in the cities of Harlingen, Del Rio, Eagle Pass and Rio Grande City, according to a press release from the governor's office.

"These teams consist of medical and support professionals which are being deployed to help meet medical needs in hospitals throughout the state," the press release says.

"The support from our federal partners is crucial in our work to mitigate the spread of COVID-19 in our communities throughout Texas," said Governor Abbott. "I am grateful for this ongoing partnership with the Department of Defense and the U.S. Navy, and the State of Texas will continue to utilize every resource available to protect public health and keep Texans in every community safe."