"We have had this big flare up in Florida, Texas, a couple of other places," Trump said from the Oval Office on Monday. "I’ll get involved and we’ll start doing briefings."

The acknowledgement came as Trump's advisers debate a return to the daily briefings, which were a hallmark of the pandemic's earlier days. They ceased after Trump repeatedly found himself sparring with reporters and going on tangents, including one about ingesting disinfectant.

Now, however, many of Trump's aides worry he appears absent as the crisis continues to rage. Trump no longer attends daily coronavirus task force meetings and hasn't held an event specifically focused on the virus in two weeks.

Trump said the revival of briefings would allow him to tout advancements on therapeutics and vaccines and explain the "positive things" his administration is doing to combat the virus.

"I think it’s a great way to get information out to the public," Trump said, adding they would likely resume on Tuesday at 5 p.m. ET — the same time he typically briefed in the spring.

"We had a good slot. A lot of people were watching," Trump said, using television ratings lingo to describe the sessions: "We had record numbers watching," he said. "In the history of cable television there’s never been anything like it."

Treasury Secretary Steve Mnuchin said the Trump administration hopes to pass a phase four stimulus package before the end of the month, and said that negotiations for the package will start with “another trillion dollars.”

Mnuchin said the focus of this package will be “kids and jobs and vaccines," echoing Senate Majority Leader Mitch McConnell's repeated framing of the forthcoming Republican proposal. Mnuchin also claimed there will be a vaccine before the end of the year for emergency use.

Mnuchin said they want to tweak the enhanced unemployment insurance so they “don’t pay people more money to stay home than go to work.”

He also said the new package will have “tax credits that incentivize business to bring people back to work. We’ll have tax credits for PPE for safe work environments, and we’re going to have big incentives, money to the states, for education for schools that can open safely and do education.”

Mnuchin added that the administration wants liability protection in the new package.

Brazil’s Minister of Citizenship Onyx Lorenzoni said he tested positive for Covid-19, in a Twitter post on Monday.

In a series of tweets, Lorenzoni wrote that he was tested after his symptoms started last Friday. He said he started the so-called “Covid-kit” treatment, a cocktail of drugs promoted by some medical doctors who back Brazilian president Jair Bolsonaro’s claim that it’s an effective treatment in the early stages of the novel coronavirus.

"I have been following the azithromycin, ivermectin, and chloroquine protocol since Friday and I already feel the positive effects," Lorenzoni wrote on his Twitter account.

About the drugs: The Brazilian Society of Infectious Diseases (SBI), in a report published Friday, urged medical professionals to stop using hydroxychloroquine to treat coronavirus, because it has been proved ineffective and can cause collateral damage.

A week earlier, Brazil’s National Health Surveillance Agency which regulates pharmaceuticals, ANVISA, released a statement saying there is no conclusive proof that ivermectin is effective as Covid-19 treatment.

Lorenzoni did not have any official meetings with Bolsonaro in recent weeks.

The state of Florida is reporting at least 10,347 new cases of Covid-19 and 90 additional deaths on Monday, according to data released by the Florida Department of Health.

This brings the state's total cases to more than 360,000 since the pandemic began, according to the state department of health. The statewide resident death toll is now at least 5,072.

Here's a look at new daily cases in Florida over the past two weeks: 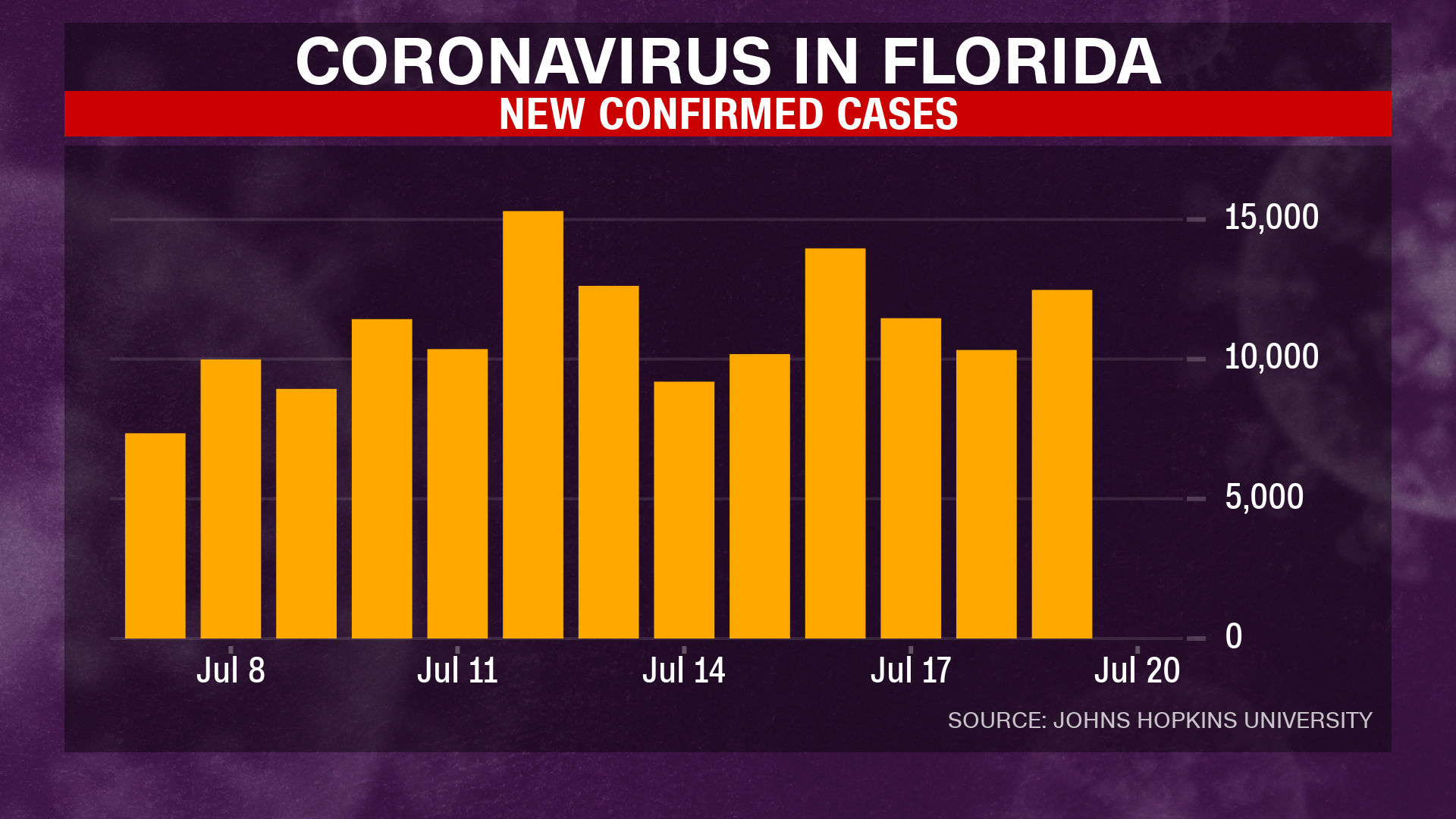 Last week, the Board of Commissioners unanimously voted to approve an emergency order that allows fines to be issued to people not complying with the guidelines.

Authorities issued 67 individual citations and 48 business citations, according to the Miami-Dade Police Department.

Individual citations are $100 and $500 for businesses.

When Atlanta Mayor Keisha Lance Bottoms enforced a mask mandate in Atlanta, Georgia, Gov. Brian Kemp filed a lawsuit against her, calling the mandate a violation of his emergency orders that prohibits local leaders from adding to the state's requirements to protect against coronavirus.

Despite this action, Mayor Kelly Girtz also mandated masks in Athens, Georgia. However, he says he has not been sued yet.

“We are maintaining our mask mandate. The courts have not issued any cease and desist. And we believe we're well within our rights and in fact, well within the health care guidance that we’ve been receiving nationally and internationally,” he said.

He highlighted the importance of how a mask mandate creates a “level playing field” that ensures equal safety for everyone alike.

“It's the 30% of our population living in poverty, who are clerks at grocery stores, who are cleaning homes, who are maintaining facilities. So we're all in this together. So if we have a level playing field with a mask mandate, whether you're in a small business or a large, that maintains that level of order, in the same way that a residential speed limit of 25 miles an hour does the same in front of your home and mine.”

In addition to the residents, Athens also hosts about 40,000 university students, which is of concern to the mayor.

“I know that young people think of themselves as invulnerable, but the reality is that they are not,” he said. “Young people are by nature, again, loosey-goosey.”

“What we want is for everyone to take this deeply seriously, because in order for us to come out of this pandemic, we are going to need to all be practicing the best behavior possible. And frankly, when I ride down some of the college-occupied streets in this town, I don't see the best behavior right now, and we are going to need to step up our game.”

While dozens of hospitals in Florida are reporting 0% of ICU beds available, Miami-Dade's Jackson Health System is teetering every day, the CEO says, adding that they may be preparing for a plan B and C, given the growth in cases.

“We're building a 100 new ICU beds but unfortunately, they’re not going to be around until the end of the year,” President CEO Carlos Migoya told CNN. “We've only seen a [case] growth of 60% in the last 14 days and in specific ICU only 18%, we expect those numbers to grow a little higher, and for that reason, we may be putting plans B and C into place.”

The hospital staff is also under strain during this surge. At least 200 employees have tested positive for Covid-19 and aren’t coming in to work currently, he said. Out of those 200, 37 are nurses.

“Gov. DeSantis has helped us out quite a bit by providing an extra 200 nurses to us at this point in time, and actually been extremely important for us. We've also hired another 90 or 100 nurses but all of that is influx at this point in time. It's a big challenge and a lot of anxiety for everyone,” he said.

Under this strain, health care workers at the Jackson Health System have asked for hazard pay. However, Migoya says they’re not able to provide it at this point.

“At this point in time we've lost in excess of over $80 million and not been able to catch up with the federal support, but we have not gotten any funding from HHS,” Migoya says. “We are financially challenged.”

Here's a look at the numbers in New York:

One thing to note: These numbers were released by New York State’s public health agency, and may not line up exactly in real time with CNN’s database drawn from Johns Hopkins University and the Covid Tracking Project

New York Gov. Cuomo said it was a mistake for other state governments to listen to the President’s calls to open up during the pandemic.

Cuomo said the federal government has been “incompetent” and “in denial” on the situation and has “pressured” states “to reopen recklessly, which they did.”

“Their mistake was they listened to the President," he added.

He said people are fleeing from other states to New York to find a safe haven from the virus. “Those other states have to get the virus under control," he said.

New York has police in the airport and a form individuals flying from impacted states need to fill out. It’s illegal to leave the airport without doing so.

There is no enforcement mechanism for people driving into the state, Cuomo said.