Spain hoped its beaches would be the “safest holiday destination” in Europe this summer. Now, at the height of the tourist season, Barcelona and its surrounding areas are in the grip of a fresh coronavirus outbreak.

Almost 3,000 new infections were found in the Catalonia region over the weekend. Local officials urged the roughly 3 million residents of the Barcelona area to stay home on Saturday, but stopped short of making that mandatory. The next day, thousands flocked to the beach and many left for their summer holiday homes.

“It wasn’t clear. People can go outside Barcelona, but the recommendation is also to stay at home. You can go to the beach but you have to wear a mask. But if you are in a terrace, you don’t have to wear it,” said Barcelona resident Carolina Fernandez.

My perception is: if something is not mandatory, we don’t do it," she added.

Epidemiologists say Barcelona's spike is a prime example of what happens when virus monitoring systems are neglected and government mandates aren’t clear.

“Why is it happening? Because the government did not introduce appropriate contact tracing,” epidemiologist Helen Legido-Quiqley told CNN.

By her estimate, Catalonia would need at least 2,000 contact tracers that should have been hired and trained during the previous lockdown. She warned that it would now be much more costly to impose a second lockdown.

“We had three months to prepare and they have not done it,” she said, adding:

It’s a good investment. If you invest in those people and pay their salary, it’s much cheaper than having to lock down the whole city which might happen in the near future.”

Marti Angladan, a spokesperson for Catalonia’s government, admitted that the region needs to double the number of contact tracers.

“We should have doubled this figure. And we are trying to do so. But bear in mind, that we were readying ourselves for an outbreak at the end of October, September,” he told CNN. “[This is] much earlier than expected. We thought, we’d been told by experts, that the high temperatures would slow down, would calm down the virus.”

No such luck for Barcelona. The sunshine is not stopping the virus -- but it is still drawing in tourists.

Stepping off a plane Monday, British visitor Graham Parker was nonplussed by news of the outbreak. “If you’re going to catch it, you catch it here or in the UK,” he told CNN. “Just be careful, keep your distance, use face masks.”

For the first time in six weeks, the Indian Union territory of Delhi registered fewer than 1,000 new cases of the novel coronavirus in a 24-hour period.

The last time new cases were below period quadruple digits was June 1. The daily caseload peaked on June 24, with 3,788 cases identified in a single day.

Delhi, which includes the Indian capital New Delhi, has been one of the country's hardest-hit regions. More than 123,000 cases have been confirmed there, killing at least 3,663 people, and it has 15,166 active cases.

India is dealing with one of the world's worst coronavirus outbreaks. The country surpassed 1 million cases last week, trailing only the United States and Brazil in terms of the total number of patients identified throughout the pandemic.

Delhi is the third worst-affected region in the country after western Maharashtra state and southern Tamil Nadu state, which have over 318,000 and 175,000 total confirmed cases respectively, according to the country’s health ministry.

More Americans are testing positive for coronavirus all over the US at record-breaking numbers and the surge is slowing down testing.

Diagnostic labs are feeling the effects of the spike in cases, with a leading commercial lab saying testing results can now take up to two weeks -- up from its previous one-week estimate just days ago.

The delays come even as the labs work to scale up their capacity, hoping to be able to perform about 150,000 tests each day by the end of July, Quest Diagnostics said in a news release.

Demand is even higher in the South, Southwest and West regions of the US, Quest said.

And the pandemic is still in its early stages, said Michael Osterholm, director of the Center for Infectious Disease Research and Policy at the University of Minnesota. 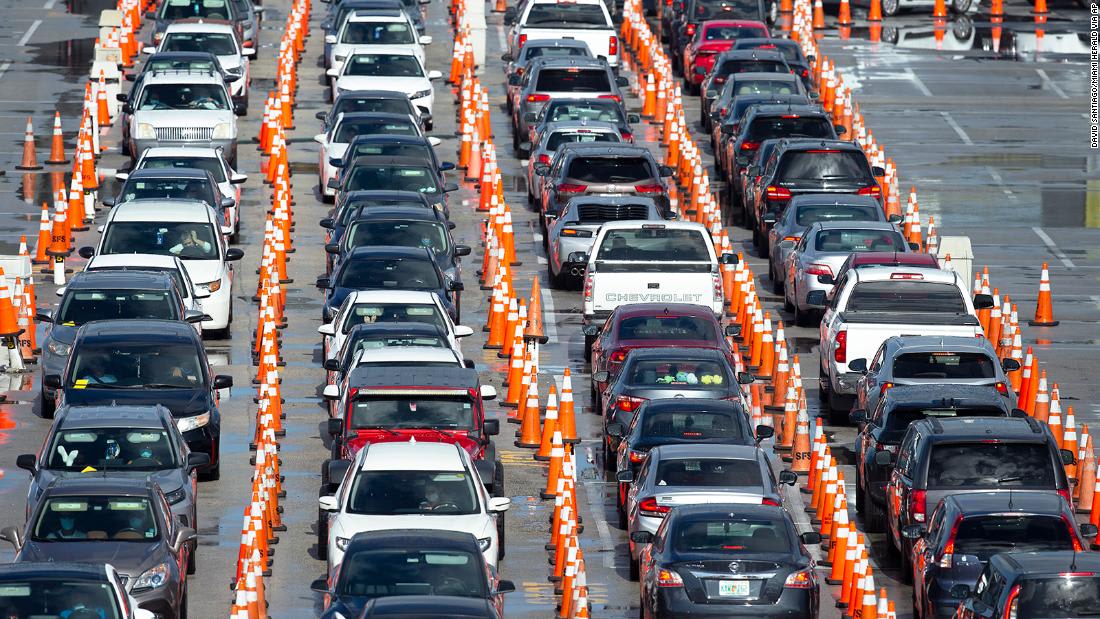 Five new novel coronavirus patients have been identified at US Marine Corps Air Station Futenma on the Japanese island of Okinawa, authorities there said.

Several clusters of Covid-19 tied to the US military have emerged in Okinawa in recent days. Public health officials in Okinawa prefecture have recorded 145 cases of the virus tied to US military bases since July 1.

Nearly 200 people have also been tested that are connected to Camp Hansen, which is located to the north of Futenma. Among those tested were people likely to be in contact with American service members -- those working in restaurants, nightclubs, barbershops and taxi drivers. Authorities said all the tests came back negative.

Local employees at thees US military bases work under "indirect employment" contracts, where they are employed by the Japanese Defense Ministry and work under the supervision of the US military, according to the Okinawa government.

China's Civil Aviation Authority announced on that anybody planning to board a flight to mainland China must provide authorities with proof that they tested negative within five days of their flight.

Foreign travelers will need to apply for a health certificate from the Chinese embassy in the country of origin, while Chinese passengers will have to present a QR code to prove their eligibility to board the flight.

China has recorded more than 85,300 cases of Covid-19 since the novel coronavirus first emerged in the city of Wuhan late last year, according to data from Johns Hopkins University.

The deal would focus on providing funding across three pillars: creating reforms to help businesses rebound from the pandemic, rolling out new measures to reform economies over the long haul, and investing to help protect from "future crises." It would provide hundreds of billions of dollars in grants and loans to member states.

The agreement came after days of deadlock and fractious talks that were described as some of the most bitterly divided in years.

"We did it! Europe is strong. Europe is united," European Council President Charles Michel said at a press conference Tuesday. "This is a good deal, this is a strong deal, and most importantly, this is the right deal for Europe right now."

Michel described the occasion as the first time that members of the European Union were "jointly enforcing our economies against the crisis."

Read more about the deal here: 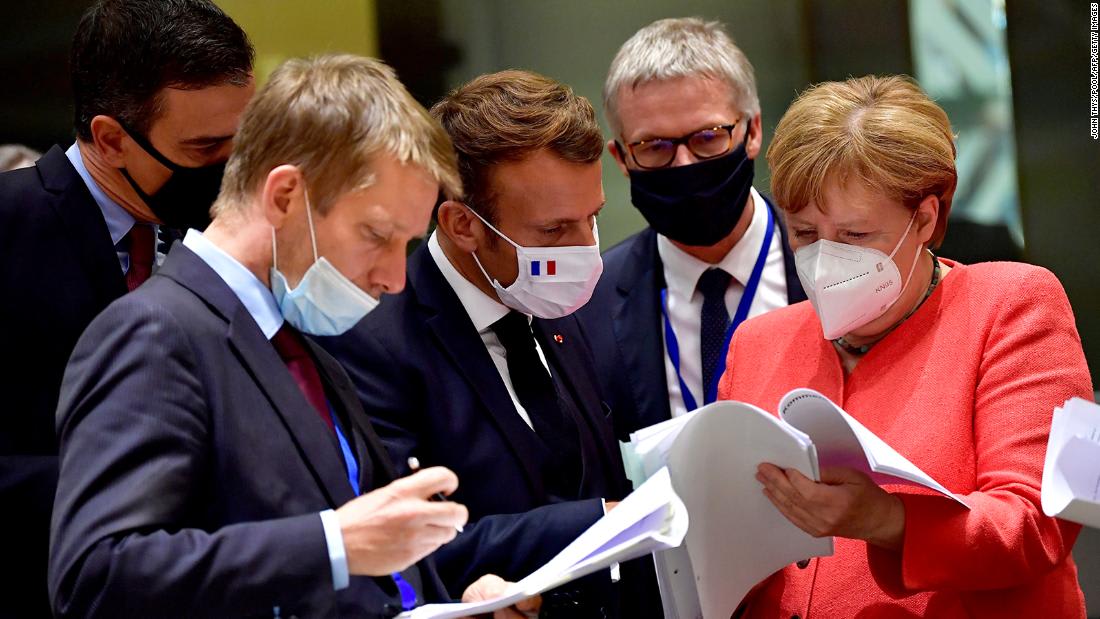 A total of 56,750 cases of Covid-19 and 372 virus-related deaths were recorded in the United States on Monday, according to Johns Hopkins University's tally of cases.

To date, at least 3,830,010 coronavirus cases have been identified in the US since the pandemic began. More than 140,900 people have been killed.

It’s hard to draw many conclusions at this point from the vaccine data published Monday by the University of Oxford, said Dr. Peter Hotez, professor and dean of Tropical Medicine at the US' Baylor College of Medicine, during an interview with CNN’s Wolf Blitzer.

Hotez predicted it will take until the middle of next year to find out if the vaccine actually works.

“Looking at the data coming out of the AstraZeneca-Oxford vaccine, in a single dose, the vaccine did not seem to do all that much. The levels of virus neutralizing antibody, which many think is a good indicator of whether the vaccines are going to work, were not very high,” Hotez said. “In two doses it seemed to be better, but there were only 10 patients who got the two doses.”

“So, it's really hard to conclude, very much from this,” he said.

Hotez said the results suggest a larger trial is needed.

“And that’s the idea behind Operation Warp Speed. All of these vaccines will start entering phase 3 clinical trials at various times over the next year and then it’ll take a year to accumulate all the data showing the vaccines actually work, as well as that they’re safe ... But keep in mind the first vaccines may not be our best vaccines, added Hotez.

“It’s looking like many of them are just partially protective, potentially preventing people from getting very sick, but not interrupting transmission. So, even then we’re still going to have to maintain ongoing public health control.”

There are 23 Covid-19 vaccines currently in clinical trials globally, according to the World Health Organization.

While the surge in coronavirus cases in the United States has amplified the need for timely testing, diagnostic companies continue to grapple with turnaround times of multiple days or more for coronavirus test results.

Some labs have attributed the longer waits to extreme demand and strain on testing supply chains. There are now more than 3.8 million confirmed coronavirus cases in the US, with tens of thousands of new infections every day.

Quest Diagnostics said in a statement Monday that average turnaround time has increased to seven days or more for the general population, and that a “small subset of patients” may experience wait times of up to two weeks.

Prioritized patients, such as symptomatic healthcare workers and those who are hospitalized, get results in two days on average, the company said. Quest says that’s longer than the one-day average wait time priority patients had a week ago.

On Saturday, the Food and Drug Administration authorized Quest to use its Covid-19 test with pooled specimens, where samples from multiple patients are tested together, which the company said should help increase capacity.

But Quest also said the biggest factors they face now are the limits of the complex machines that perform the tests, as well as limited supply of reagents, the chemicals used to perform the tests.

US Assistant Secretary for Health Brett Giroir said on CNN’s “New Day” Monday the average turnaround time for tests in most states is longer than three days, though in 18 states the average is two to three days.

“That is not optimum. We want to reduce that. It will be reduced,” said Giroir, who added that supply of reagents is “tight.”