California, the first state to shut down months ago, has now become a coronavirus hotspot, surpassing New York with the most coronavirus cases in the nation.

Earlier this month, the governor shut down bars and indoor operations for restaurants and other businesses hoping to limit social gatherings in enclosed spaces.

According to Johns Hopkins University data, California has reported more than 409,000 Covid-19 cases. 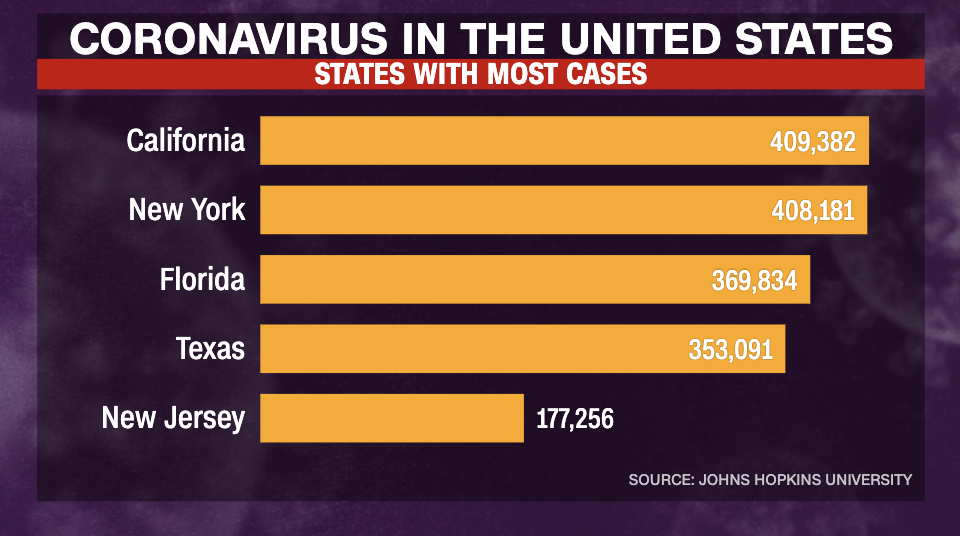 In Los Angeles, the number of daily hospitalizations hit a new high for the fourth time in a week Monday, according to officials.

Los Angeles County officials said Tuesday young people were driving the spread of the virus, with 57% of new cases reported in people under 41 years old.

"The tragedy of what we are witnessing is that many of our younger residents are interacting with each other and not adhering to the recommended prevention measures," Dr. Barbara Ferrer, the county public health director, said in a statement.

Los Angeles Mayor Eric Garcetti told CNN earlier this week he was on the "brink" of issuing another stay-at-home order for the city, urging residents to avoid gatherings.

Dr. Anthony Fauci, the director of the National Institute of Allergy and Infectious Diseases, on Wednesday called for a "sustained commitment" on pandemic preparedness.

Speaking with the TB Alliance, Fauci said that "between crises," it is difficult to allocate resources for something that might happen when there are competing priorities.

"You get through a crisis and then you realize that you are not as well prepared as you should have been," he explained.

"I do hope that with all the pain and suffering that the world is going through now with Covid-19, that we do not forget that when we get through this – which we will get through it – that we know that it will happen again. It certainly will. And that's the reason that I think we really need to push to have a sustained commitment," he said.

"Emerging infections will continue to occur long after we're all gone, so let's prepare for them," Fauci added.

Dr. Anthony Fauci, the nation’s top infectious disease expert, said there is “not a chance” he would walk away from the challenge of Covid-19.

“I would never do that,” Fauci said, after being asked what keeps him from going back to his day job. “This is such an important public health challenge that we are facing.”

Walking away from this challenge would be unimaginable “no matter what they throw at me,” he said.

“This is just too important. There’s too much at stake for the world for me to walk away from this,” he said. “Not a chance.”

Senate Minority Leader Chuck Schumer further dug into Republicans Wednesday over their “dysfunction” and “disarray” on the next coronavirus relief bill.

“There are only three weeks left until the August work period, and Republicans are still in the opening phases of preparing their bill,” Schumer said in a floor speech, claiming they're “tied in a knot” and can’t come up with a proposal.

“This isn’t the typical Republican disfunction on whether or not they didn’t or did see the President’s last tweet,” he also said. “The disarray on the Republican side has real consequences.”

He added that if the administration “refuses to reverse course,” Democrats will demand data transparency be included in the next relief bill.

On President Trump resuming his coronavirus task force press briefings, he said, it’s “remarkable” that he’s “lowered the bar so much” that his performance yesterday was seen as a “change in tone.”

“Americans must be hanging their heads in shame and disbelief that this administration is still trying to sort out the basics,” he said.

Schumer also criticized Trump for calling the coronavirus the ‘China virus’ at his press conference, saying it shows how he continues to “deflect blame”.

The US is heading in the wrong direction with Covid-19 numbers, and it's doing so with astonishing speed.

To put that in perspective, the first reported case came on January 21. After 99 days, 1 million Americans became infected. It took just 43 days after that to reach 2 million cases.

And 28 days later, on July 8, the US reached 3 million cases. Case number 4 million could be reported just two weeks after that.

Here's a look at how the total number of Covid-19 cases have progressed in the US, according to Johns Hopkins University data: 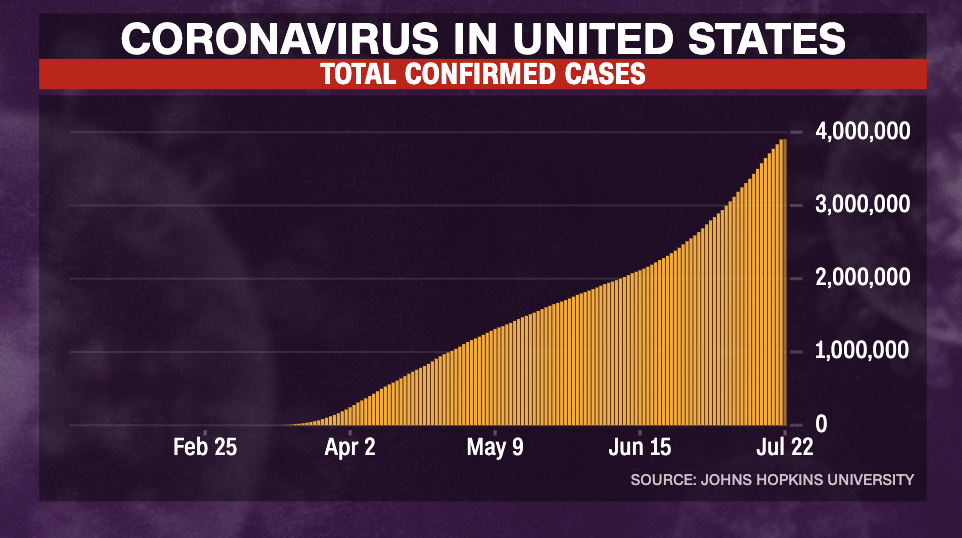 While some US leaders, including President Trump, have pinned the spike in coronavirus numbers on increased testing, it's actually the prevalence of the disease that's causing cases to climb.

A CNN analysis of testing data from the Covid Tracking Project reveals that the positive test rate — indicated by the average number of positive test results out of 1,000 tests performed —has increased significantly in many states that have seen the largest increases in new cases in recent weeks, including Florida, Arizona, Texas and Georgia.

Over the weekend, nearly 50 hospitals across the state reported no ICU beds were left. The ICU bed availability statewide stood at about 15.98% on Tuesday, down from about 18.1% Monday.

Track the virus in your state and across the US

The state of Florida is reporting 9,785 new cases of Covid-19 and 139 additional deaths on Wednesday, according to data released by the Florida Department of Health.

This brings the state's total cases to 379,619 according to the state department of health. The statewide resident death toll is now 5,345.

More than 100,000 people have signed up to participate in Covid-19 vaccine clinical trials, Dr. Anthony Fauci, director of the National Institute of Allergy and Infectious Diseases, said on Wednesday.

Speaking with the TB Alliance, Fauci said people have signed up through the Coronavirus Prevention Network (CoVPN) and a public database.

"We have well over 100,000 people that have already signed up as volunteers," Fauci said. "I think we'll be fine with regards to getting enough people. In the first trial is going to be 30,000 people in the trial, and there are gonna be more than one trial, so you're talking about tens and tens of thousands of people that will be needed for these multiple vaccine trials."

Lowe’s Home Improvement says it will not require its employees to enforce a customer mask mandate at its stores across the country.

In a statement to CNN, Lowe’s spokesperson Steve Salazar said, “we will not ask our associates to put their safety at risk by confronting customers about wearing masks, so we are consistently requesting that customers wear masks for the safety of everyone in our stores.”

The home improvement chain says it’s added signs at its stores, requesting that customers wear masks for the safety of everyone. They’re also providing free masks to customers who need them.

Some background: Without a federal mask mandate, companies have had to step in and make their own rules.

CVS, Walgreens, Walmart and Home Depot are among many companies not asking employees to enforce their mask wearing policies.

“We are going as quickly as we possibly can” on vaccine development, Dr. Anthony Fauci, the director of the National Institute of Allergy and Infectious Diseases, said during a webinar with the TB Alliance on Wednesday.

“If you want to do it correctly, with safety, and real attention to safety and efficacy, I think we are going as fast as we possibly can,” Fauci said.

He said that the speed of the result of vaccine trials will always be determined by the level of infectious activity that is present.

“In other words, if you can get that vaccine trial going in the middle of a lot of viral activity, such as we are experiencing now in the United States, with 50 to 60 to 70 thousand new infections per day, that’s bad news for public health, but that certainly facilitates the development and the proving of the efficacy of a vaccine,” he said.

“So I think, Betsy, we are going as quickly as we possibly can now,” without jumping over important steps Fauci said.

Click here to catch up on the latest on the development of a Covid-19 vaccine.