The United States Forces Japan (USFJ) said it will start publicly releasing numbers of “active” coronavirus cases in every military base in Japan twice weekly, according to a statement from USFJ.

“The leadership at United States Forces Japan felt that additional transparency at the community level was necessary to accurately depict the scope of the issue,” the statement read. “Our installations are now permitted to release numbers associated with new positive COVID-19 cases.”

At least 7 new cases were reported in Yokosuka Naval Base on Tuesday and one case was reported at Camp Hansen in Okinawa on Wednesday, bringing the total number of coronavirus cases among US military bases in Japan to 153 since July 1.

Previously, infection cases among US military personnel had been reported to Okinawa prefectural government and few other municipal governments where the bases are located.

Japanese Defense Minister Taro Kono said during a news conference on Tuesday that the ministry plans to have Japanese workers at US bases, beginning with those in Okinawa, receive a coronavirus test. Okinawa governor Denny Tamaki said the test will begin within this week at the earliest.

Researchers are continuing to work on developing Covid-19 vaccines, and several have started showing positive results.

Here's the latest on where the process stands:

Face masks and social distancing will play an important role in reopening schools, Dr. Robert Redfield, director of the US Centers for Disease Control and Prevention, said on Wednesday.

"It's so important now to work together with school districts to figure out how they can take our guidelines and operationalize them in a practical way. And to do it in a way that is safe for those who are vulnerable, particularly the teachers and those children. … And one of the most important things is going to be the role of face masks and the role of social distancing in those classrooms," Redfield added.

US Health and Human Services Secretary Alex Azar called the US government’s agreement with Pfizer “historic” on CNBC Wednesday morning.

“This Pfizer one’s really historic,” Azar said. “It is a contract, an advance purchase contract, where we can acquire 100 million doses of this vaccine as early as December of 2019, of 2020 and have the option to buy an additional 500 million doses.” (Azar misspoke in the interview, first saying 2019, then correcting himself to say 2020).

Azar said that clinical data from the phase 1 trial of the Pfizer vaccine shows that it produces what is looked for in the early stages of a vaccine: “neutralizing antibodies [at] levels equal to or better than what we see in recovered Covid patients and their convalescent plasma.”

“So, really a historic agreement that President Trump led us to here,” Azar said.

The Pfizer news comes on the heels of four other major investments, Azar said. The other four investments are in AstraZeneca, Moderna, Novovax and Johnson & Johnson’s vaccine from its subsidiary Janssen Pharmaceutical.

In Florida, at least 53 hospitals have reached intensive care unit capacity and show zero ICU beds available, according to data released by the Agency for Health Care Administration (AHCA).

Eleven of those hospitals are in Miami-Dade County, the epicenter of the virus in the state. In the past 14 days, the county has seen an increase in the number of Covid-19 patients being hospitalized (36%), in the number of ICU beds being used (46%) and in the use of ventilators (74%), according to the latest data released by the county's government.

Another 45 hospitals in the state have 10% or less ICU capacity available, per AHCA. The Baptist Hospital in Miami, for example, only has one ICU bed is available.

AHCA reports 15% ICU beds available across the state of Florida.

Jessica Ortiz said she and her twin brother, Jubal, were inseparable. Even when Jubal lay dead in an open casket with plexiglass over his body — out of fear he could still be contagious with coronavirus — she couldn't help but lean down and touch him at his viewing earlier this month.

Now, weeks later, she wears a necklace with his ashes.

"He meant the world," Jessica, who is from Hidalgo County in South Texas, said, remembering her 27-year-old brother. "I just wish it wasn't him."

Health experts say there's no evidence that bodies are contagious after death, but the moment speaks to the fear and concern in Hidalgo County, where health officials say Covid-19 is wreaking havoc on communities. Hospitals started reaching capacity earlier this month in the Rio Grande Valley, which has become the main hotspot in Texas.

Vallejo said walking through the hallways at the hospital is a "massive shock," and he worries about the mental health of his colleagues who are overwhelmed with the sheer number of patients. "It's not easy to handle something like this."

The situation has grown so dire that Hidalgo County officials threatened this week to criminally prosecute people who don't quarantine after testing positive for Covid-19. Hidalgo County Judge Richard Cortez issued a shelter-at-home order for all residents starting Wednesday. 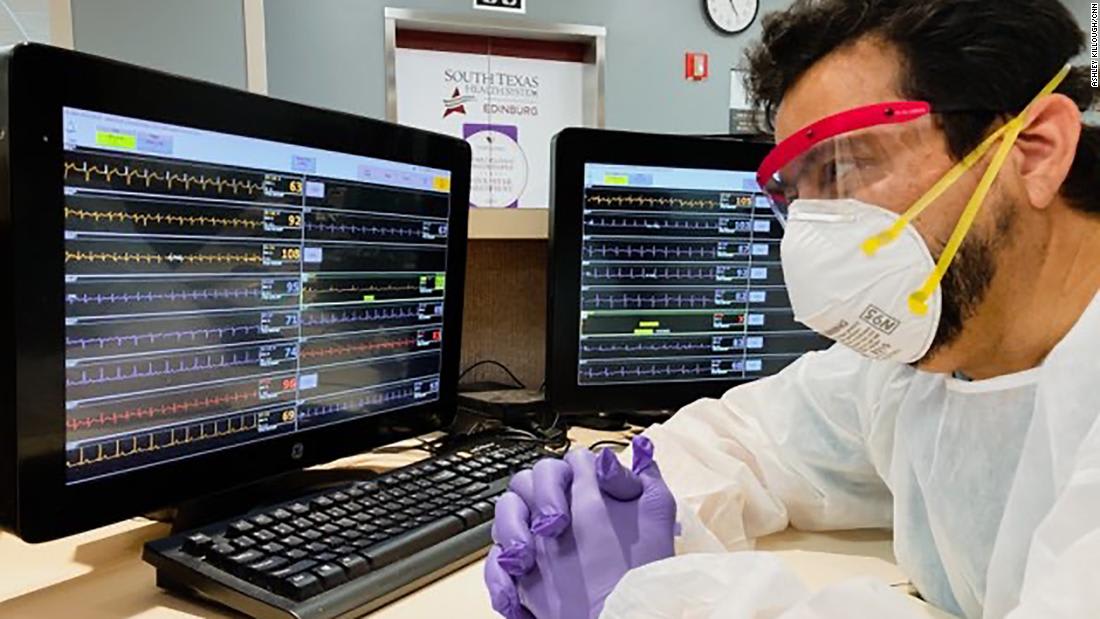 Fairfax County Public Schools in Northern Virginia, one of the largest public schools systems in the nation, has announced it will begin the school year virtually on Sept. 8.

In a message addressed to county parents, caregivers and staff, Superintendent Scott Brabrand said they had determined that “full-time online instruction is the only safe option at this time.”

“The pandemic looks much different now than it did even three weeks ago,” Brabrand said, “Although infection rates in Fairfax County have declined and are relatively stable, 33 percent of our employees live outside the county. The threat posed by the virus does not recognize borders or boundaries.”

“We will reassess health conditions regularly to determine when students can begin in-person instruction, if science and data suggest it is safe to do so, “ Brabrand added.

This is a change from the county's first back-to-school plan: The original plan for Fairfax County Public Schools was to open with two days a week in the classroom and the rest will be virtual. Parents could have chosen the option to have their children engage in only virtual learning, Brabrand told CNN’s Dana Bash.

The White House has been pushing for schools nation-wide to open for in-person teaching.

In an interview on Fox News last week, Education Secretary Betsy DeVos said of Fairfax County’s original plan, “What kind of family can orient their schedules around that kind of a schedule? And for kids, it’s just the wrong thing.”

Dr. Robert Redfield, director of the US Centers for Disease Control and Prevention, said Wednesday that wearing masks is one of the most powerful tools to combat the spread of Covid-19, and that Americans should embrace their "personal responsibility" by wearing one.

"We're not defenseless. We have powerful tools. Probably the most powerful tool that we have is a simple face mask," Redfield said during an interview on Good Morning America. "If all Americans would embrace that as part of their personal responsibility to confront this outbreak, we could actually have a very significant impact on the outbreak that we're seeing across the country in the next four, six, eight, 10, 12 weeks."

Redfield said he doesn't think a mask mandate would work, adding that he's focusing his efforts on letting people know "they could be part of making this get better before it gets worse by wearing a face covering. And that's what I'm going to continue to do. I think we have clear data now that face masks work and we really know — the key is now how to get everybody to embrace them."

Remember: President Trump said he would not consider a national mandate on mask wearing in a new interview with Fox airing Sunday.

When asked by Fox News' Chris Wallace whether he would consider instituting a mandate, Trump responded, "No, I want people to have a certain freedom, and I don't believe in that, no."

Surgeon General Jerome Adams has echoed Trump, saying he does not think a national mask mandate is necessary. At the same time he urged all Americans to continue to wear face coverings.

Meanwhile, a growing number of US states have mandated the use of masks and face coverings while in public. See where your state stands here.

With reporting from CNN's Nicky Robertson and Holly Yan.

The US Department of Health and Human Services and the Department of Defense announced an agreement with Pfizer Inc. on Wednesday for “large-scale production and nationwide delivery of 100 million doses of a Covid-19 vaccine in the United States following the vaccine’s successful manufacture and approval,” according to a press release. It also allows the US government to acquire an additional 500 million doses.

The initially produced vaccines will belong to the federal government, and Pfizer will deliver the doses in the United States if the vaccine receives emergency use authorization or licensure from the US Food and Drug Administration.

“Through Operation Warp Speed, we are assembling a portfolio of vaccines to increase the odds that the American people will have at least one safe, effective vaccine as soon as the end of this year,” Health Secretary Alex Azar said in the release. “Depending on success in clinical trials, today’s agreement will enable the delivery of approximately 100 million doses of vaccine being developed by Pfizer and BioNTech.”

The Biomedical Advanced Research and Development Authority collaborated with the DoD Joint Program Executive Office for Chemical, Biological, Radiological and Nuclear Defense and Army Contracting Command to provide $1.95 billion for the production and nationwide delivery of the first 100 million doses after an OK for the FDA.

How this could play out: If the vaccine is successful and receives EUA or licensure, nationwide delivery would begin in the fourth quarter of 2020.

The doses would be delivered to locations at the US government’s direction and it would be available to Americans at no cost, the release says. Health care professionals could charge insurers for vaccine administration.

“We’ve been committed to making the impossible possible by working tirelessly to develop and produce in record time a safe and effective vaccine to help bring an end to this global health crisis,” Dr. Albert Bourla, Pfizer chair and CEO said in a separate release. “We made the early decision to begin clinical work and large-scale manufacturing at our own risk to ensure that product would be available immediately if our clinical trials prove successful and an Emergency Use Authorization is granted.”

Preliminary data released in a pre-print paper this week by Pfizer and BioNTech said its Covid-19 vaccine appeared safe and elicited antibody and T cell immune responses in a Phase 1/2 trial. More research is needed. The company has said it could start a Phase 3 trial of the vaccine in late July if it receives regulatory approval.

CORRECTION: This post has been updated to indicate that $1.95 billion will be provided for the production and nationwide delivery of the first 100 million doses.