There have been at least 3,919,550 cases of coronavirus in the US since the start of the pandemic, and at least 142,350 people have died, according to Johns Hopkins University's tally of cases.

Spain recorded 730 new coronavirus cases in the last 24 hours, the highest number since May 8, data from the country's health ministry showed on Wednesday. The total number of cases in Spain has now reached 267,551.

Spanish Health Minister Salvador Illa confirmed on Wednesday that there were a total of 224 active outbreaks in the country, “most of them under control, including the one in Lleida which is now considered controlled.”

The director of the Center for Health Emergencies, Fernando Simon, explained last week that the new cases were increasingly associated with younger people.

The county's Covid-19 death toll rose by two in the last 24 hours and 12 in the last seven days. A total of 28,426 people have died from coronavirus in Spain.

Ignacio Aguado, the vice president of Madrid's regional government, said the regional government is considering making masks mandatory in all public places also in the capital. Madrid and the Canary Islands are the only two regions in the country where masks are not mandatory when the safety distance can be respected.

The regional government's health councillor will meet the health minister on Thursday to debate further measures to contain the spread of the virus, including measures for Madrid's airport.

"New measures in Madrid will depend on the outcome of that meeting," Aguado added.

He said there is no shortage of swabs or media for coronavirus testing, the items his agency is responsible for overseeing, but added that testing is "stressed in locations that have increased cases, increased hospitalizations."

"There is no doubt about it," Gaynor said when asked by Rep. Max Rose, a Democrat from New York.

He went on to describe the four activities needed to "crush Covid-19."

“There are some fundamentals that we all have to do, wear a mask, socially distance, stay away from large crowds, don’t go into bars and good hygiene. If we do those four things, we can continue to crush Covid-19,” Gaynor said.

Baker reported 143 new cases of coronavirus as of yesterday, which brings the total number of cases in the state to at least 107,000. At least 513 people are hospitalized for Covid-19, with 63 of those patients in the ICU, Baker said. The seven-day average for positive tests remains at about 1.7%, he added.

“But I do want to point out that when we reopened…we actually had a higher positive test rate two and a half months ago than we have today,” Baker said. “Which speaks, not only to the strategic decision-making that went into developing and implementing that plan, but it also speaks in a very big way to the work that’s continued to be done by the people of Massachusetts to do the things that we know are most successful in containing the virus and reducing the spread.”

One thing to note: These numbers were released by the Massachusetts governor and may not line up exactly in real time with CNN’s database drawn from Johns Hopkins University and the Covid Tracking Project.

Covid-19 will spread to schools if there is widespread transmission of the virus happening within a community, Dr. Mike Ryan, executive director of the World Health Organization’s Health Emergencies Programme, said on Wednesday.

Ryan said that schools are "a microcosm of our society, of our community" and "a subset of people from our community."

"So if we have spread of the virus in our community and that spread is intense and is widespread, then that disease will spread to the school environment," he explained while during a social media Q&A.

"The disease may pass through children. It may find the child then that's less immune or has some compromise and can cause a more severe infection. Or it can also be brought to vulnerable grandparents or others. So, the way I would see it is that when you have intense transmission at community level, then we have to be careful about schools," Ryan added.

He also said school environments are very important to communities, as they act not only as a place where children receive an education, but also as a source of nutrition and safety "in areas that are not necessarily as safe socially for kids."

Schools "are very important centers within our societies and within our communities. So we have to do everything possible to bring our children back to school. And the most effective thing we can do to stop the disease in the community," Ryan added.

California surpassed New York as the state with the most coronavirus cases in the US. However, while New York reached its coronavirus peak within a month, California saw a slow build up to the surge, according to Johns Hopkins University. 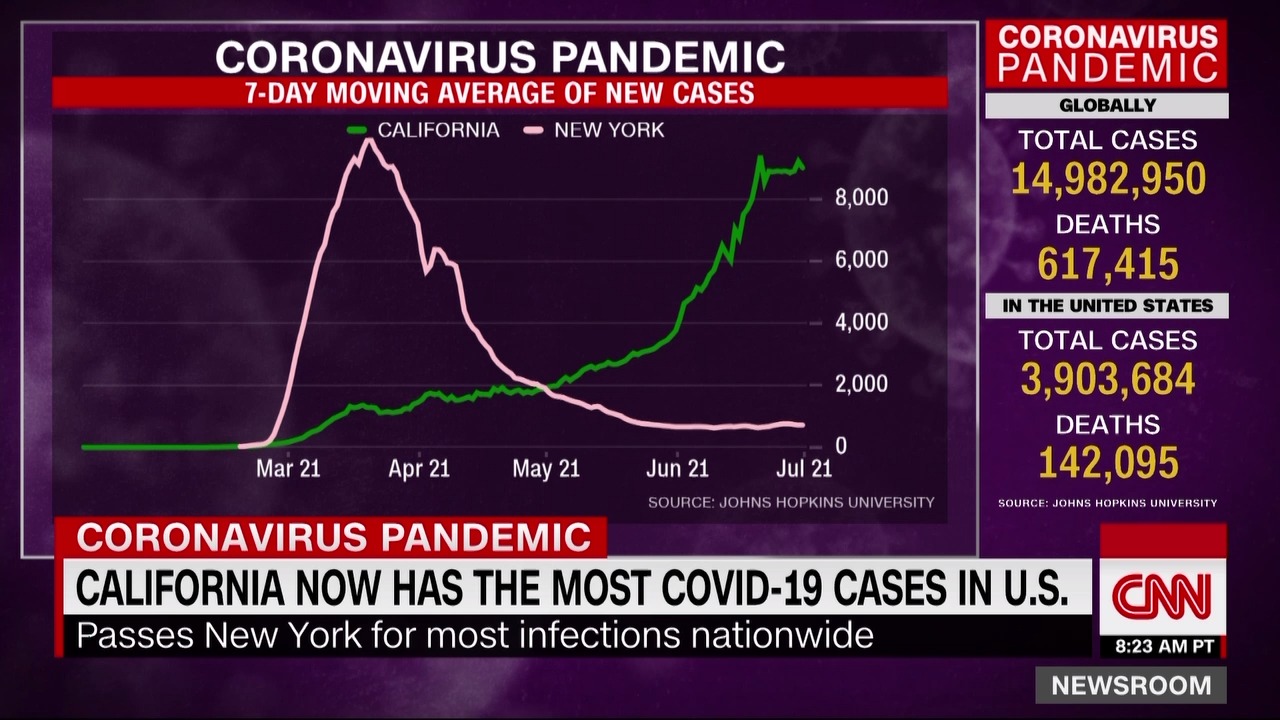 As New York was one of the first states to be hit with the surge, it did not have much time to prepare, according to Dr. Mizuho Morrison, an emergency physician in Southern California.

However, as New York went through its surge and eventually bent the curve, she says doctors in California were learning from their New York colleagues and putting plans in place to manage its surge.

“In emergency medicine, we actually call this time to prepare the golden hour. So we had that luxury,” she said.

“Based on what our colleagues were learning and essentially teaching us in live time from New York, we had time to develop impressive surge plans. Our new triage systems were actually stopping patients before they even enter the hospital, separating out those that may have Covid symptoms. We’ve separated our ICU and in-patient wards, and have ramped up outpatient telemedicine,” she explained.

However, Morrison says that she is dreading the upcoming flu season, which may complicate things, especially when states and schools start reopening and people go back to work.

“We have rapid influenza testing, but rapid Covid testing is not so robust. We don’t have enough of it. We really reserve it for those patients who’re coming to the hospital. As flu season begins to hit, because the symptoms and presentation is so similar, it’s going to be difficult for us to decipher, is this Covid or is this influenza?” Morrison said.

The number of confirmed coronavirus cases reported worldwide reached 15,000,424 on Wednesday, according to Johns Hopkins University’s tally of cases.

Here's a look at the country's with the highest number of cases and where they stand on Covid-19 deaths: 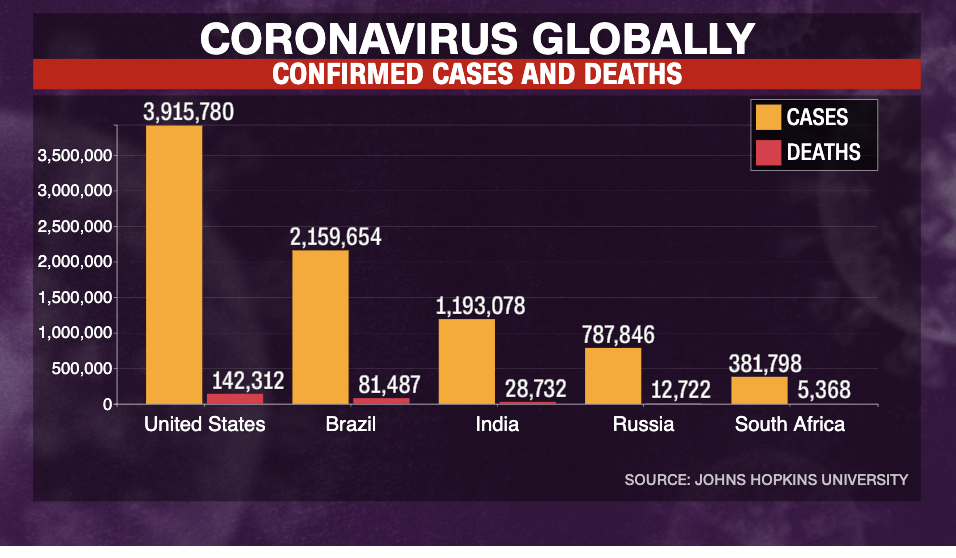 Leave your questions for Gates below, and tune in to the one-hour special at 8 p.m. ET on Thursday.

Fewer than 30 passengers have been banned from United Airlines flights for refusing to wear a mask while on its planes, the airline said Wednesday.

United and other major US airlines rolled out policies in mid-June threatening a ban for any passenger who refuses to wear a mask onboard their planes. United’s policy calls for airline officials to conduct an investigation and consider a ban when the passenger does not comply with crew member instructions.

United announced this morning its mask requirement will soon expand to include airports – from check-in through baggage claim. Until now, it has only required passengers wear masks when boarding and while aboard planes. Some airports already require the wearing of masks under local rules for public facilities. It is also requiring passengers who want to claim an “extraordinary circumstances” exemption from the mask requirement receive permission from United.

United executives said on a call with reporters that most passengers are complying with the requirements, and that the bans will be lifted when the mask requirement is rescinded.

The officials also said fewer than 1% of customers are changing their flight plans when informed their plane will be more than 70% full. United, at times, sells flights until they are filled up, but says it informs passengers when it happens so they are able to rebook. Other carriers have limited the number of passengers on a given flight.

There is no federal requirement that passengers wear masks aboard planes.