United Airlines is expanding its mask requirements for passengers, requiring that its fliers wear a face covering in all 360 airports United serves, at every step from check-in to baggage claim. Since May, the airline had only been requiring that passengers wear a mask while on board a flight.

Now passengers who believe they have “extraordinary circumstances” preventing them from wearing a mask must get permission from the airline not to wear one. United says passengers who do not comply with updated rules could be kept from boarding a flight or banned from flying again.

The move comes as the airline announced a $1.6 billion loss in the second quarter of the year — the worst loss in its nearly hundred-year history. The airline reports that it is still burning $40 million in cash each day as the coronavirus pandemic has cratered revenues by 80 percent.

Where other airlines stand: Delta Air Lines, which also require passengers wear masks starting at check-in, updated its mask policy on Monday. It is now telling customers who have a health condition preventing them from wearing a face covering to maybe reconsider flying. Those who do still want to fly will need to submit to a health consultation at the airport with a doctor provided by the airline.

At least 1,000 American deaths linked to coronavirus were reported Tuesday, and the spread shows no sign of slowing down.

The harrowing death toll comes as states across the country report record-breaking numbers of new cases. More governors are making masks a requirement as overwhelmed testing labs and hospitals are raising alarm. And officials are debating whether to send children back to school.

According to data from Johns Hopkins University, a quarter of all days this year have seen a US death toll exceeding 1,000.

Experts say the virus is now running rampant within American communities, and new data from the US Centers for Disease Control and Prevention also show infections could be more than 10 times higher than the number of reported cases in some parts of the US. At least 27 states have hit the pause button on their reopening plans or set new restrictions to help curb the spread of the virus.

But President Donald Trump said Tuesday the pandemic is likely to "unfortunately get worse before it gets better," a prediction that's been echoed by other experts who have shared a bleak outlook on the next few months in the country.

Last week, CDC Director Dr. Robert Redfield said the fall and winter will likely be "one of the most difficult times that we experienced in American public health." 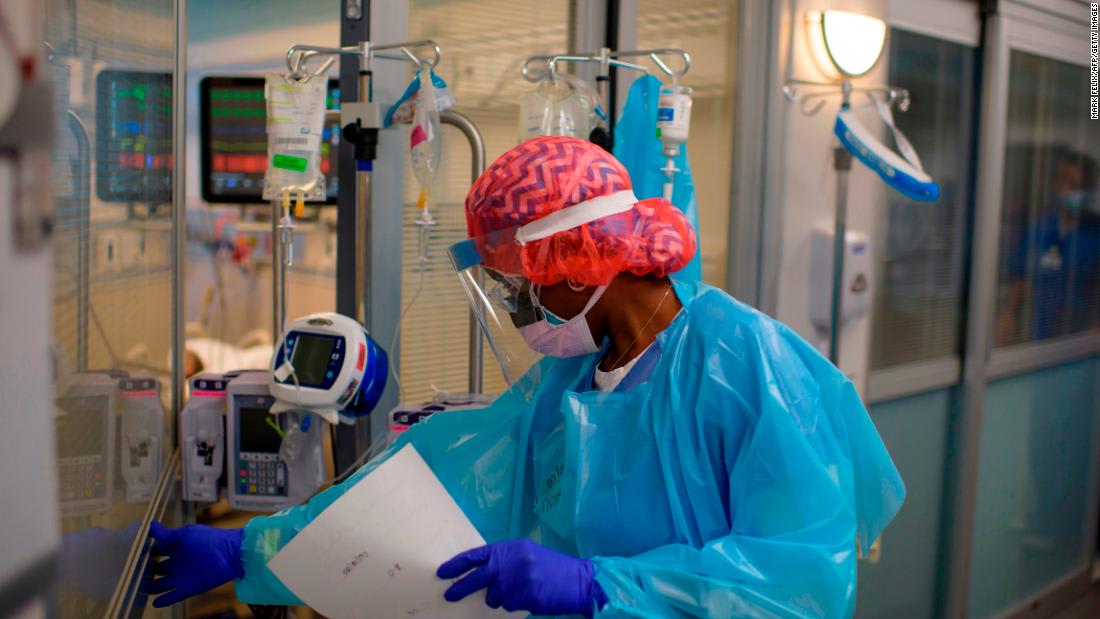 US returns to 1,000 coronavirus deaths in a day and officials warn pandemic will only get worse

Manager Jurgen Klopp has likened it to the eager anticipation of opening presents on Christmas Day, but Liverpool fans have been urged to stay at home ahead of the team's trophy presentation at Anfield on Wednesday.

Contrary to government guidelines, fans gathered outside the stadium as Chelsea defeated Manchester City last month and Liverpool's 30-year wait to be crowned English champion came to an end.

Flares and fireworks were set off as supporters congregated outside Anfield, and now authorities have warned the public to avoid the stadium during Liverpool's game against Chelsea, which will be followed by the official trophy presentation.

"On this occasion, the best seat in the house is in your living room," said assistant chief constable Natalie Perischine from Merseyside Police.

"There is simply no benefit to going to the ground and we as a city cannot afford for people to gather in large numbers.

We are all still in unprecedented times due to the Covid-19 pandemic and the last thing anyone wants is a resurgence of cases in Merseyside, with every life lost a tragedy."

Matt Ashton, director of public health at Liverpool City Council, said that the threat of a second lockdown is "very real" in the city, while Peter Moore, CEO of the football club, emphasized that "nothing is happening outside of the stadium" during Wednesday's game. 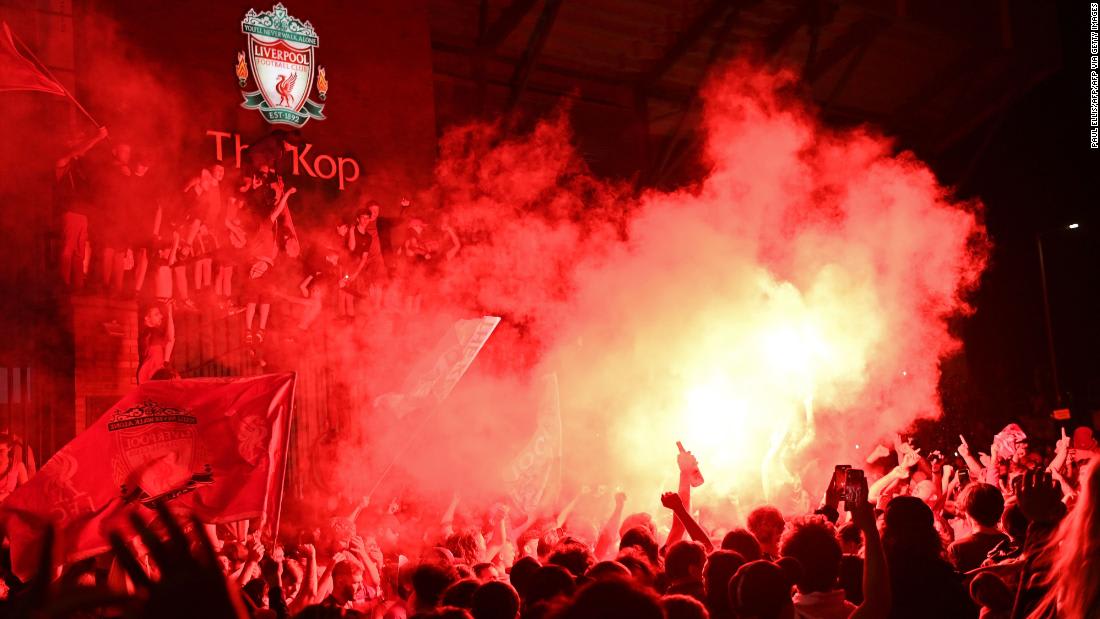 Nearly one in four residents in the Indian capital of New Delhi may have been infected with the novel coronavirus, antibody tests on a random sample of people have shown.

The survey tested blood samples of 21,387 people across Delhi. Among them, 23.48% were found to have Covid-19 antibodies, indicating past exposure to the coronavirus.

The study, conducted by India's National Center for Disease Control two weeks ago, suggests actual infections in the city are much more widespread than the number of confirmed cases reflects.

As of Wednesday, Delhi has recorded a total of 125,096 cases, accounting for less than 1% of its population of 16.78 million, according to the last census carried out in 2011.

The result of the study, however, suggests that around 4 million Delhi residents could have been infected with the virus by the first week of July.

What's happening: Delhi is the worst-hit city in India, with the highest number of coronavirus cases as well as the most cases per capita.

The coronavirus is still fast spreading in the country, with 37,724 new cases reported in the past 24 hours, bringing the total to more than 1.19 million cases -- the third highest in the world after the United States and Brazil. 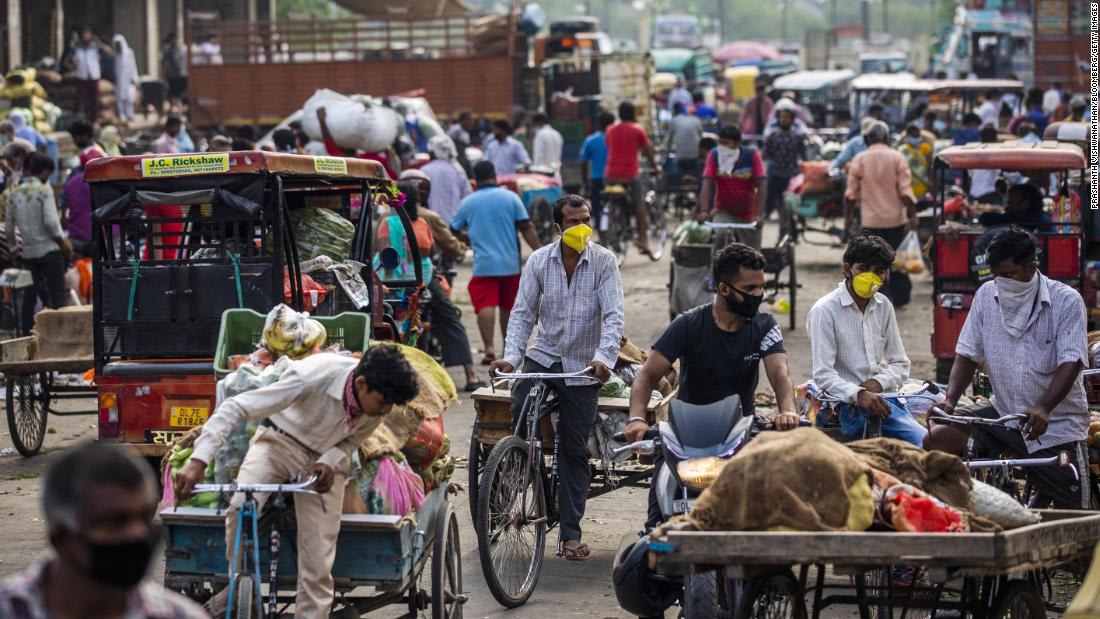 Nearly one in four people in Delhi may have contracted Covid-19, study reveals

Trump, coaxed back to the White House briefing room by his tumbling poll numbers and plummeting public confidence in his handling of the pandemic, mostly stuck to an unusually disciplined, scripted message on Tuesday.

He finally endorsed, without reservation, the wearing of masks, weeks after many state, city and local leaders had pleaded with their constituents to adopt the practice to slow the out-of-control spread of the novel coronavirus.

And hours before the daily US Covid-19 death toll topped 1,000 for the first time in two weeks, the President warned in an unusually somber and honest assessment that the crisis was likely to get worse before it got better.

But deep into a crisis that has seen nearly 4 million US infections and tens of thousands dead, Trump offered no clear plan to reverse his administration's mistakes or any comprehensive new approach to lead the country out of its worsening viral nightmare -- or even much comprehension of why things got so bad. 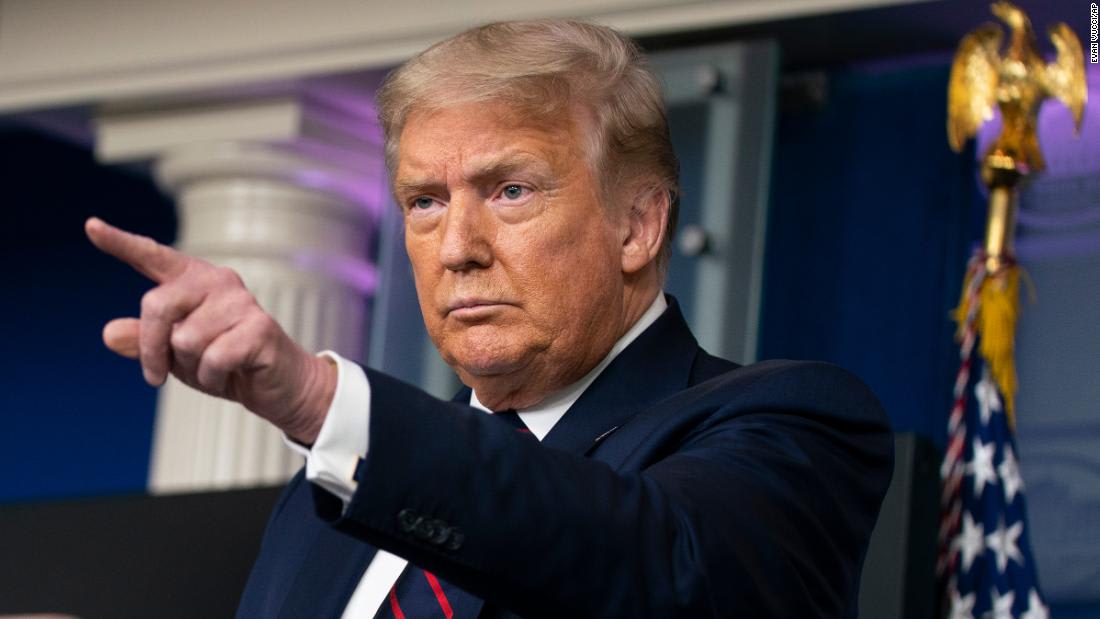 Trump's return to fronting virus briefings is too little, too late

Hong Kong will require all individuals to wear a face mask in all public indoor areas as it battles the third wave of Covid-19, Secretary for Food and Health Sophia Chan said Wednesday.

While masks are currently required in public transport, the requirement will be extended to all public indoor areas, bus interchange and terminal stations, she said.

The new regulations will take effect on Thursday, and offenders may face a maximum penalty of US$645 (HK$5,000).

In addition, the city will require air travelers from nine high-risk countries -- including the United States and Kazakhstan -- to show negative results in nucleic acid tests within 72 hours of their flight, she added.

Chan said the additional measures are needed as the city has reported 605 locally transmitted cases in the past 14 days. She said the coming two weeks will be critical.

"There is a high risk of a major outbreak in the community," she said. "If the number keeps going up, we cannot rule out taking stricter social distancing measures."

According to Johns Hopkins University's tally of cases, there were 64,534 new cases and 1,082 reported deaths reported in the United States in the past 24 hours.

It is the highest number of daily coronavirus deaths in the US in at least two weeks.

For the latest US figures, follow CNN’s map which is refreshed every 15 mins: