With summer blockbusters pushing back their release dates because of coronavirus, AMC Theatres is delaying its opening once again.

The world's biggest movie theater chain is postponing the reopening of its US theaters to "mid-to-late August," the company said on Thursday.

AMC was set to have a phased reopening on July 15 with the hopes of being fully operational by July 24. That date was then pushed back to July 30 late last month.

"This new timing reflects currently expected release dates for much anticipated blockbusters like Warner Bros.' Tenet and Disney's Mulan, as well as release dates for several other new movies coming to AMC's big screens," the company said in a release.

Key senators and White House negotiators said Wednesday they had reached a deal on a key piece of their stimulus package, setting the stage for the release of their long-awaited full proposal.

Senate Majority Leader Mitch McConnell told members he plans to unveil the package Thursday not as a single bill, but in pieces based on jurisdiction, GOP Sen. Roy Blunt of Missouri told reporters.

The agreement marks progress in what has been an unwieldy several days on Capitol Hill for Republicans, with splits on policy becoming public between Republican senators and the White House — and among Senate Republicans themselves.

What is expected in the plan: Senate Appropriations Chair Richard Shelby, an Alabama Republican, announced the "fundamental agreement" on the funding piece of the GOP plan, which would include $105 billion for schools and additional billions in funds for testing.

Of the $70 billion, $35 billion would be for all schools on a per capita basis and the remaining amount would be directed toward schools reopening and the costs associated with that.

Specific language will be included in the proposal to provide guidelines for how schools would qualify for the second pot of money, but the proposal would leave much of the decision making up to governors.

Additionally, the agreement includes funds for testing — a major sticking point between White House negotiators and their Senate GOP counterparts. The topline number would be $25 billion, which would comprise $16 billion in new funds and a commitment from the administration to designate for use the $9 billion in leftover funds.

Meadows said no final decisions had been made about what the GOP proposal would include on the extension of the federal enhancement of unemployment insurance or what has been decided on a payroll tax cut, which President Trump has made a priority in spite of resistance from a large number of Republican senators.

Read more about the plan here. 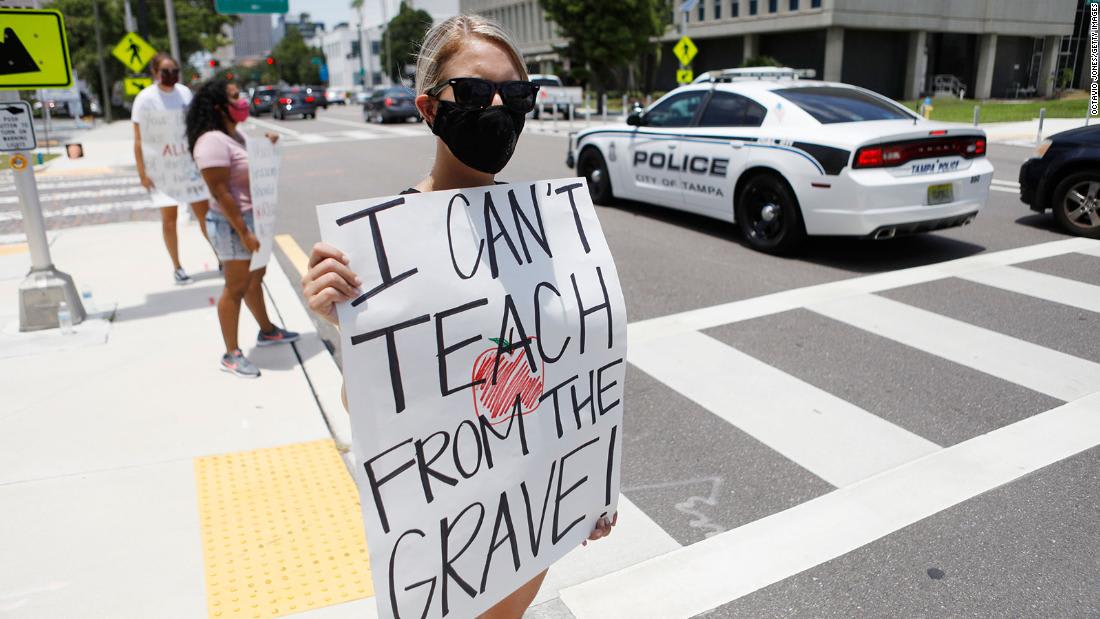 It's Thursday morning in the US, where the number of total cases since the start of the pandemic is nearing 4 million, according to Johns Hopkins University's latest tally.

If you're just reading in, here are the latest updates from around the country:

Americans have long had a love affair with Italy. This summer, that relationship is on hiatus, and Italy is feeling the heartache.

According to the Italian government's statistics bureau, 6 million US travelers choose Italy for their vacation each year. Lured by timeless dolce vita, dramatic coastal beach settings, food and wine, history and so much more, US travelers will largely have to do without this year.

As Europe transitions out of the emergency phase of the Covid-19 pandemic, border closures remain in place with only a handful of non-EU nations added to a "safe" list for essential travel only.

Italy hasn't adopted the EU's recommended list of safe countries, and the US -- deemed a high risk because of a surge in coronavirus cases -- wasn't even on the list to begin with.

In Florida, 53 hospitals have reached ICU capacity and have no beds available for the second day in a row, according to data released by the Agency for Health Care Administration (AHCA).

Eight of the hospitals at capacity are in Miami-Dade County, AHCA data shows.

Another 44 hospitals have 10% or less ICU capacity available.

More than 5,000 people have died because of the virus in Florida.

Despite the crisis, the state's Republican Governor Ron DeSantis has announced that all public schools will reopen by August. DeSantis has also resisted calls to consider a mask mandate.

With the US economy wavering as coronavirus cases spiral out of control, millions of renters across the country who are already behind on payments are increasingly concerned about the threat of evictions as the new rent month approaches.

Jose Palma, a construction worker in Richmond, California, is one of them. The 40-year-old father of two just started getting regular hours after months out of work and owes four months of back rent on a three-bedroom unit on top of his August rent -- a bill of about $8,000, he says.

"There isn't a solution right now," said Palma. "I owe rent. I have to put food on the table for my kids. It's stressful and all very hard."

Housing instability has been a looming crisis in the US against the backdrop of the pandemic as the economic fallout coupled with the absence of a broad federal response has left renters vulnerable. And this week, more than 25 million people will lose the extra $600 weekly federal unemployment benefits boost, cutting out a crucial lifeline many renters have depended on to make ends meet.