The three countries worst hit by coronavirus right now are strong and able, but the World Health Organization can help if needed, officials said Wednesday.

“We are always ready and will always remain ready to provide advice, input and service to any of our member states wherever they are,” WHO’s Dr. Mike Ryan said during a briefing Thursday in Geneva.

“Obviously, the United States is not in need of our assistance most of the time,” he added.

Ryan said that the WHO regional office for Southeast Asia was in Delhi and one of their largest country offices in the Americas is in Brazil.

“Those countries are intertwined with us,” Ryan said. The US, Brazil and India lead the world in new coronavirus cases at present.

Ryan said he believes all three of these countries are “powerful, able, democratic countries, who have tremendous internal capacities to deal with this disease,” and they can “turn this around, because of the nature of their public health, their science and their innate capacities to fight this disease.”

“We are here to help all countries, and we work through our regional offices and we work through our country offices to provide support to everyone, everywhere,” she said. “And I think just a message to say that even in those three countries that have the highest number of cases right now, can be turned around. It can be turned around, and there are tools that all countries have that can do that.”

These tools involve physical distancing, hand hygiene and being informed about where the virus is present, Kerkhove said.

Peru’s President Martín Vizcarra announced his government issued an emergency decree in order to impose additional measures and help the region of Arequipa, which has become the new epicenter of the Covid-19 pandemic in the country.

Vizcarra said Peru’s health ministry will intervene and cooperate with Arequipa’s regional government to tackle the crisis after the region reported a significant increase in the number of coronavirus cases in the last few weeks.

“The health ministry involvement as a national authority in the Arequipa region is needed to alleviate the crisis due to the increase of Covid-19 cases and deaths. There are resources and the will to fix the problem in Arequipa,” the president said on Wednesday evening during a televised address to the country.

Arequipa, in southern Peru, had been one of the least affected of Peru’s 24 regions. It registered 11,012 Covid-19 cases and 601 deaths on Wednesday evening, according to data released by the health ministry.

Vizcarra traveled to the region last Sunday and admitted the lack of resources in the region. His administration had ordered more than 110,000 rapid tests, almost half million drugs and more than one million personal protective equipment units (PPE).

“This help hasn’t arrived yet,” the president said.

“They are even asking for donations,” he added, according to state news agency, Andina.

Dr. Miguel Palacios, dean of the Medical College of Peru, told CNN the government’s announcement is a good start but more action is needed as the situation in Arequipa has reached breaking point.

“The health system has been totally overwhelmed, we think Arequipa should be declared a 'health disaster area' to be able to activate more resources apart from the health ministry’s support," Palacios said.

Palacios highlighted that hospitals have reached their capacity, there is lack of oxygen for treating patients and a shortage of doctors, many of them working with delayed payments and under challenging labor conditions.

At least 120 doctors have been infected with the virus while nine have died in Arequipa since the pandemic started, Palacios told CNN.

More on the country's figures: On Wednesday evening, Peru’s Health Minister Pilar Mazzetti Soler announced 3,688 new Covid-19 deaths that were previously unaccounted for. The new deaths were brought to light after an analysis by a special commission that studied 20,000 cases from March to June, Mazzetti Soler said.

At least 2,650 doctors have been infected with coronavirus while 95 have died due to the virus, according to data released by the Medical College of Peru.

The Illinois Department of Public Health (IDPH) announced 1,624 new cases of Covid-19, bringing the total number of cases statewide to 166,925.

This is the highest daily total of cases since May 25, according to the numbers published by the IDPH website.

IDPH said in a news release that the seven-day positivity rate is 3.4%.

There are 20 new deaths associated with the virus, bringing the state’s total to 7,367, according to the release.

The state also reported that 1,473 people are hospitalized with 309 in intensive care units and 135 on ventilators.

The Louisiana Department of Health reported a total of more than 100,000 cases of coronavirus in the state.

According to the agency, at least 2,408 new coronavirus cases were reported Thursday, bringing the total number of cases statewide to 101,650.

Community spread made up about 91% of new cases and 33% of the cases were identified in people ages 29 and under, the agency tweeted.

The total number of deaths statewide stands at 3,574, with 16 new fatalities reported Thursday, the agency said.

According to Johns Hopkins University's website, at least 11 other states have reported more than 100,000 coronavirus cases.

Note: These numbers were released by the Louisiana Department of Health and may not line up exactly in real time with CNN’s database drawn from Johns Hopkins University and the Covid Tracking Project.

Spain’s northern region of Aragon will bring back phase two of the de-escalation process for some counties following an increase in the number of Covid-19 cases.

People in the area of Bajo Cinca, Bajo Aragón-Caspe, Comarca Central and Monegros will be asked to stay in their county and only leave when absolutely necessary. Meetings of over 10 people are forbidden and the capacity of bars and restaurants will be reduced.

About the numbers: Spain recorded 971 new coronavirus cases in the last 24 hours, the highest number since May 8, the Spanish health ministry’s data showed on Thursday

Nearly half of those new cases — 422 — are in Aragon. Only three people died from coronavirus in Spain on Wednesday, bringing the death toll to 28,429.

María José Sierra of the health ministry's emergencies coordination unit said at a news conference on Thursday that “the number of cases is rising but it is not putting pressure on the health system because 50% of them are asymptomatic. The average age has gone down to 45 years old."

Sierra said that although there are 281 active outbreaks in the country, “we are most concerned about the regions of Aragon and Catalonia.”

“There is not only outbreaks. There is also community transmission," she added.

The government of the southern Murcia region also announced Thursday that it will put the municipality of Totana after identifying an outbreak in which 55 people tested positive for coronavirus.

There have been at least 3,991,061 cases of coronavirus in the US and at least 143,495 people have died from the virus, according to Johns Hopkins University's tally of cases.

Here's a look at the US states with the highest number of cases: 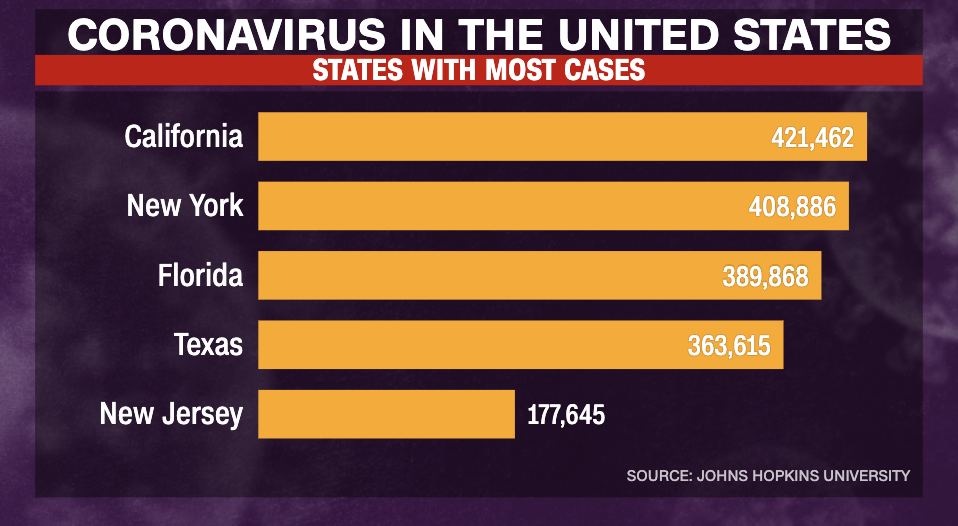 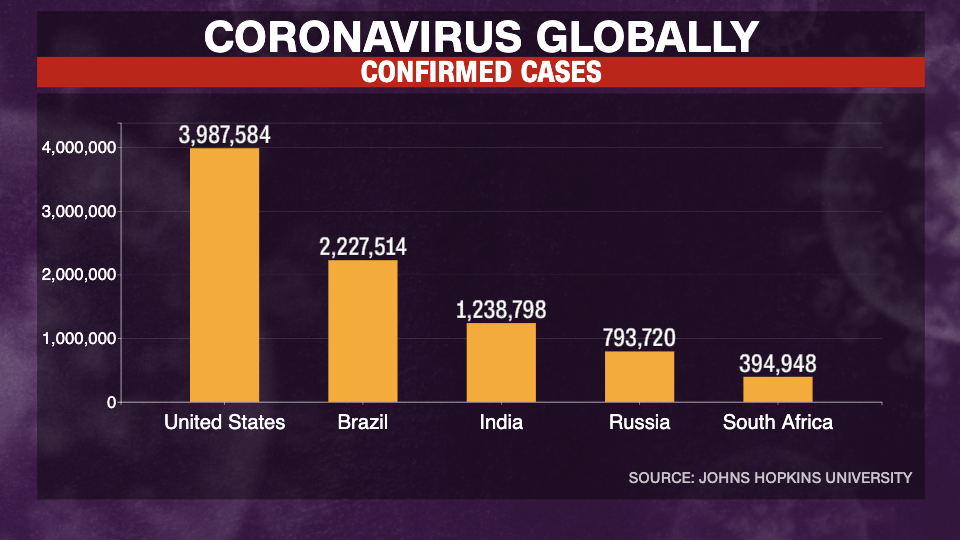 Supplemental guidance from the US Centers for Disease Control and Prevention on safely reopening schools during the pandemic could be released as early as tonight, two federal officials told CNN.

A senior administration official said that five supplemental guidance documents have now been completed and described their release as "imminent."

Some background: Earlier this week, CNN reported that the supplemental guidance from the US Centers for Disease Control and Prevention had been cleared though the federal review process by the Office of Management and Budget.

The White House initially said this guidance would come out last week, but a CDC spokesman confirmed late Friday that it would be delayed because the documents weren't ready.

A federal health official also confirmed the timetable to CNN, and, reacting to previous delays in this process, the source said: “I will believe it when I see it.”

Many school districts in the U.S. are set to resume classes in some form as soon as two weeks from now.