The number of registered Covid-19 infections in Iraq surpassed 100,000 on Thursday, the country’s health ministry said.

At least 102,226 cases have been recorded since the start of the pandemic, according to the health ministry.

As of Thursday, the ministry reports that at least 4,122 people have died from coronavirus in Iraq.

According to data compiled by Iraq’s health ministry, Iraq began consistently recording more than 2,000 new cases a day since the last week of June.

The City of Miami has issued 115 tickets for face mask violations this week, Miami Mayor Francis Suarez said during a briefing Thursday morning.

"We need to be more disciplined than ever," Suarez said. The mayor said he is not issuing a stay-at-home order for the city at this time.

Some background: Suarez announced that the Florida city would increase its penalties for people not adhering to its mask mandate, raising the amount from $50 to $100 for first and second offenses.

The mayor told CNN this morning that 39 officers this week will be dedicated solely to mask enforcement. Funds collected from face mask violations will go to businesses impacted by the pandemic, he said.

California surpassed New York with the most cases in the nation this week. With more than 420,000 cases, the state has seen a recent surge whereas New York's reported infections have slowed significantly. California reached another peak in new cases, reporting 12,807 positive tests in a day, Gov. Gavin Newsom said Wednesday.

That would mean the disease will claim more lives than Alzheimer's Disease and strokes, health officials said. Coronary heart disease, the leading cause of death, claimed 6,000 lives in the first six months of 2019.

The news comes after the county reported 2,232 hospitalized patients Monday, breaking its own record of daily hospitalizations at least four times in a week. There were 2,207 confirmed cases hospitalized Wednesday, 27% of whom are in the ICU, health officials said.

Those two numbers play key roles in helping officials determine whether to pause or roll back reopening, Colfax added.

Here's a look at the areas in California with the highest number of cases per 100,000 residents, according to Johns Hopkins University data: 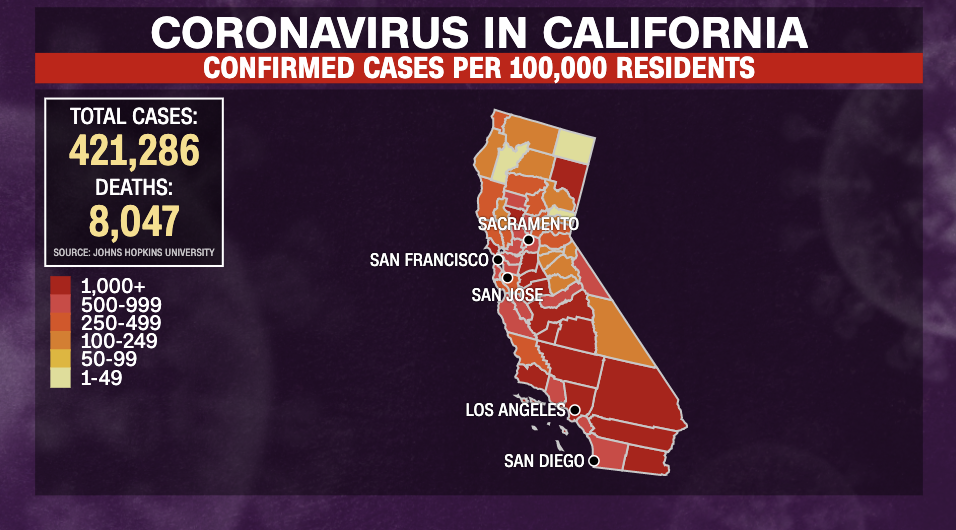 US stocks were slightly weaker at the opening bell on Thursday as investors grappled with an unexpected rise in initial jobless claims. It was the first increase in 16 weeks, with 1.4 million Americans filing for first-time benefits.

Meanwhile, earnings season is roaring on. Twitter and American Airlines reported before the bell and Intel’s results are due after the trading day.

Here's where things stood at opening:

Meadows wouldn’t divulge when exactly legislative text would be released today saying it was up to the leader. He also wouldn’t comment on how many outstanding issues there are.

“Discussions are still ongoing. It’s always in making sure the legislative text matches the understanding,” he said.

Mnuchin said once again that the payroll tax cut won’t be included, and that the President’s commitment right now is to get money out the door quickly.

What this is about: Key senators and White House negotiators said yesterday that they had reached a deal on the key piece of a new GOP stimulus plan.

McConnell told members he plans to unveil the package today not as a single bill, but in pieces based on jurisdiction, GOP Sen. Roy Blunt of Missouri told reporters. That will mark the start of negotiations with House Democrats, who passed their own $3 trillion proposal in May and have been waiting for Senate Republicans and the White House to put down a marker of their own.

Georgia health officials also reported 81 new deaths, the second highest daily count recorded since the start of the pandemic. The total death toll for Georgia is now at least 3,335.

There were 428 new Covid-19-related hospitalizations recorded on Wednesday.